What are Lee Troughs?

Troughs can develop in many ways, but in one particular case, sloping terrain plays a role. A lee trough's development begins as the air flows down the lee side of a mountain warming and compressing.

The atmosphere counteracts the compression by producing convergence at the surface, and air to rise. This action causes the pressure at the surface to decrease and cyclonically flow. Eventually, a trough forms in the lee of the mountains. Here is what one looks like on a weather map (circled in blue). 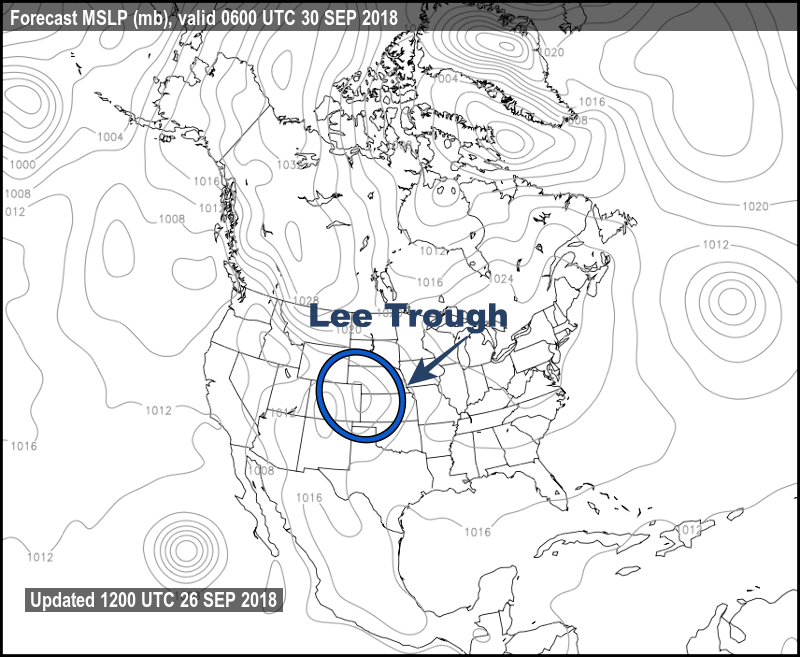 Lee Trough on a Weather Map

Once it develops, the trough tends to move southward initially; in general, a lee trough will travel with the higher terrain to the right. In the absence of sloping terrain, they will move toward areas where the pressure is falling. To the east of the trough, southerly winds move warm air northward. Since the warm air is less dense than the air it is replacing, the pressure falls to the east of the trough. As a result, the trough moves eastward and eventually northeastward. It is also important to note that lee troughs typically do not develop in association with a front. While downslope flow can play a significant role in the development of a lee trough, other mechanisms such as diabatic heating (heating from the sun's radiation) and the horizontal movement of warmer air, can also be crucial in further developing the trough.

The weather associated with a lee trough depends on the time of year. For example, those that develop in the lee of the Rockies can play a role in producing freezing rain, sleet, and snow during the cold season. During the spring and summer, lee troughs can aid in the development of thunderstorms across the Plains and Midwest. Weather conditions associated with lee troughs can also be dependent upon the temperature profile, moisture availability, and instability where it develops.

Troughs are essential in the development of precipitation. While multiple processes can be instrumental in the formation of them, the description outlined above shows that non-meteorological factors can contribute to the development of a trough. Knowing the geography of an area can help forecasters anticipate how systems may evolve.