US Winter Temperature Trends and The Game of Thrones

While it is July and quite hot across much of the US, HBO is currently advertising the new season of Game of Thrones with a “winter is coming” hashtag, so we might as well talk about US winter temperature trends. Westeros (where the Game of Thrones story takes place) tends to see multiple years pass between winters, but then often sees extremely cold winters when they occur. Winter generally occurs every year across the US, but winter seasons have been growing increasingly variable in recent years.

When looking at average winter temperatures across the US since 1980 on a population weighted basis, the last nine winters have featured the three warmest winters on record since 1980 as well as three of the six coldest, with three winters closer to normal. While the distribution of warm, more seasonal and cold winters was very much in-line with what you would expect from climatology, the spread between the warm and cold years was significant. In fact, the difference between warm and cold winters has been growing steadily over time. The average temperature difference between all below-normal winters and all above-normal winters grew slowly from the 1980s to the 2000s, but has sky rocketed this decade. That difference may lower somewhat after the next couple winters are blended in, but even if the next two winters are exactly normal, the difference between the average of the above-normal winters and the average of the below-normal winters will still be more than a degree higher than it was in the 1980s. The chart below shows the growth in winter temperature variability over time. 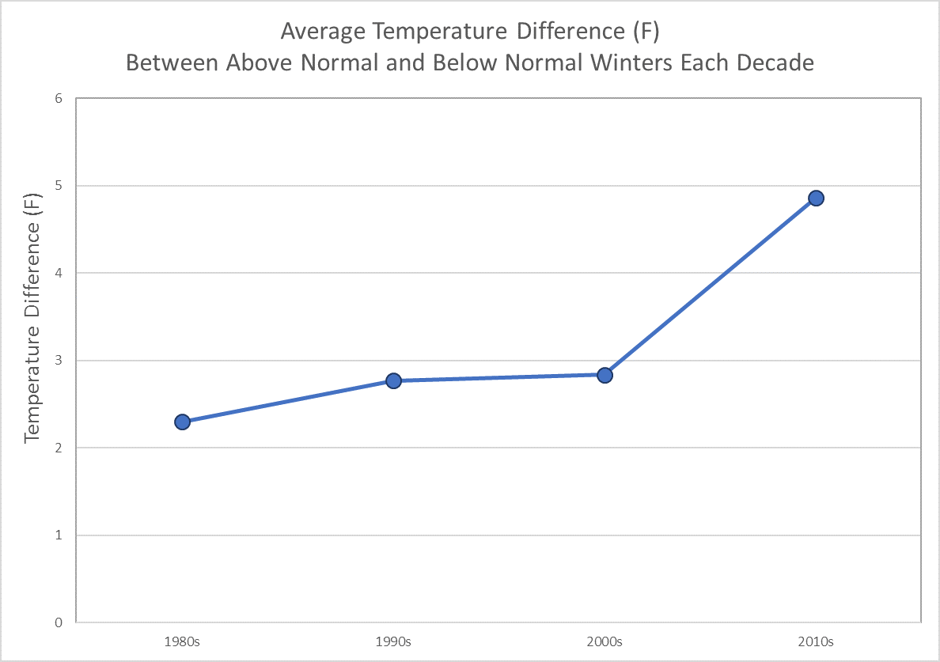 What is interesting is that this growth in variability has been entirely the result of the warm winters getting warmer rather than any change in the colder winters. The plot below shows the average winter temperature anomalies (based on 1980-2010 averages) on a US population weighted basis using 2010 population values.  Note that there has been effectively no change in the magnitude of colder than normal winters during this time but warm winters have been warming at about 0.6°F per decade. Again, a couple modestly above-normal winters during the next couple years would bring that warming rate down some, but the bottom line is that the warm winters are getting warmer while the cold winters are just as cold as they were 30+ years ago. 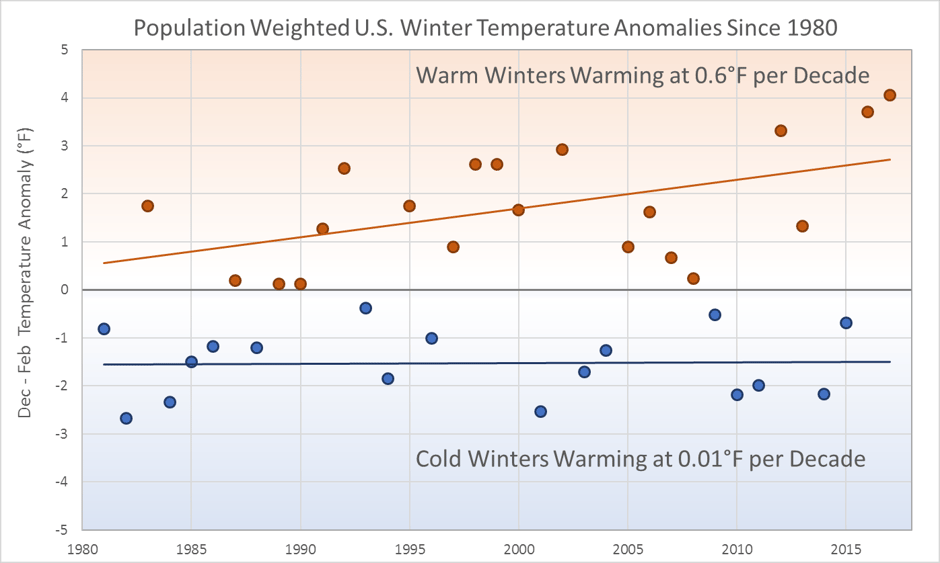 This makes sense as when northern Canada is snow covered and effectively dark for 24 hours a day during the winter, cold air will still build rapidly anytime a favorable blocking pattern develops that prevents mild Pacific air from flowing across Canada. However, ocean temperatures have warmed steadily over recent decades. So, pattern regimes that flood North America with oceanic air produce warmer temperatures than was the case a few decades ago.

Comparing average global water temperatures to average winter air temperatures across the US yields virtually no correlation with colder than normal winters (r= 0.12), but a significant correlation when only looking at warmer than normal winters (r=0.65). The last plot below shows the same warm winters from the previous plot, but adds in the average Northern Hemisphere ocean temperature. Note that while warm winters are trending warmer at the rate of 0.6F per decade, the ocean temperatures are warming at a slightly more modest 0.4F per decade. However, if the next two winters are cooler than the last couple winters and/or ocean temperatures continue to trend warmer, the two trends could end up nearly identical by the end of the decade. 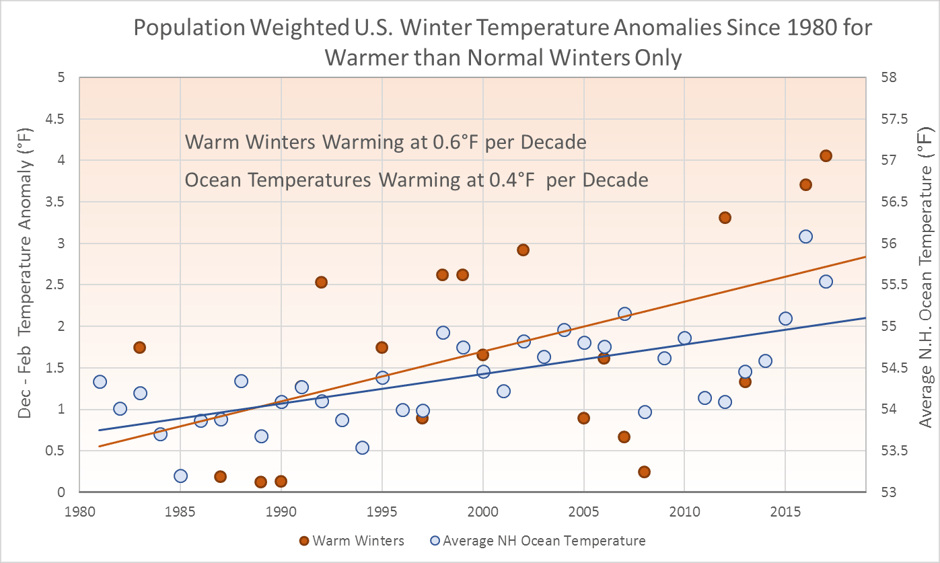 While these trends may not necessarily persist going forward, it is likely that the magnitude of warmth seen during mild winters across the US will follow along with ocean temperature trends to some extent, either up or down. So, if ocean temperatures continue to increase, year-to-year variability in winter temperatures will likely continue to increase in the decades ahead as well. Some winters would then likely average a couple degrees warmer than even the last two extremely mild winters, while other years would still see very cold winters like 2013-2014. A climate regime perhaps not so unlike that of Westeros after all.