The weather cues that signal bird migration are widely believed to have originated due to the preservation of behaviors adopted in response to species being forced by hundreds of millions of years of ice ages to stay on the move latitudinally and altitudinally. In some species, the preserved behaviors are believed to be passed on genetically, while others seem to merely react to the changing weather.

When a bird deems it time to migrate, hormonal changes trigger biological preparations, such as increased fat deposition, which increase the practicality of the long trip. Migrations are heaviest from April to May and late August to early October, although shorebirds, which feel the cold earlier and longer, may both come and go closer to June.

An internal compass composed of magnetite in the ethmoid bone, working with the trigeminal (fifth pair of) cranial nerves, gives them a sense called magnetoreception. The ability to perceive the electromagnetic fields of the Earth allows them to travel vast distances in a virtually straight line. New research is revealing that activation of the protein cryptochrome causes birds to interpret the magnetic fields of the Earth through color.

Different species have different distance-relative-to-ground speeds but flocks typically travel 50-300 miles every leg of the journey. Small, long distance migrators typically prefer to travel or takeoff at night. Some species are capable of traveling from Canada to South America in one nonstop flight! 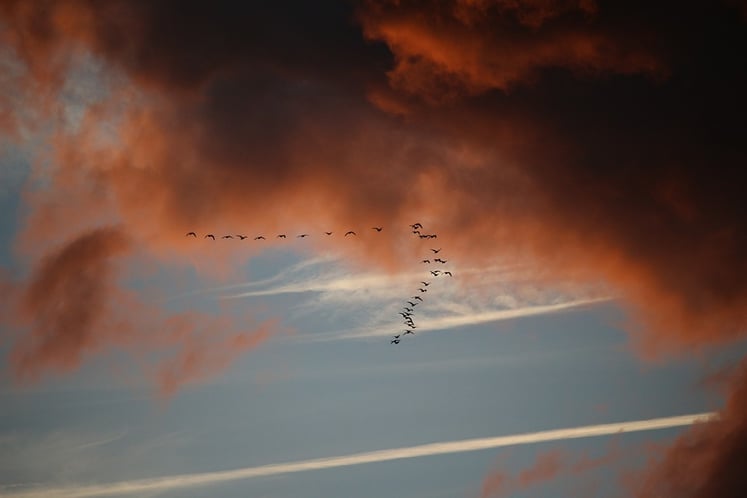 Birds often choose to come back to the same locality whereabouts they hatched. More recently, it was discovered that some also show attachment to favorite winter getaways by reappearing several years consecutively. More than half of migrants are believed to not return home because they perish, largely due to malignant weather and the abundance of predators in warmer climates, including humans.

The best migration weather is whatever conditions favor moderately strong tailwinds. Birds can ride the winds churned by low pressure systems but prefer the great conditions that tend to accompany high pressure systems. Soaring birds with impressive weights and wingspans require the occasional assistance of thermals from daytime heating to loft to high altitudes.

Both geographical limitations and substantial weather hazards may alter migration behaviors by lengthening or shortening legs of the trip. The reduced visibility induced by fog is likely to drive migrations to a halt. Even general precipitation and counterproductive but normal wind speeds can disrupt migrations. Despite birds’ remarkable navigational skills, notable winds can blow them off course, causing wind drift migration, which is known to make especially coastal birds tire out, fall and drown. Sudden changes in the weather, such as prominent cold fronts during spring migrations, can also bring down flocks. Many are also known to drown in the ocean when too chilly for flight. More flying experience visibly improves recognitions and manipulations of wind drifts. All birds are affected by inclement weather but smaller birds are less likely to dodge threats.

Radar meteorologists need to decipher the difference between weather and bird migrations. Flocks are most commonly seen both in the evening when they take off near the radar and farther away in concentric circles as they fly higher. Both are consequences of the 1° wide radar beam tilted 0.5°. Signatures of migrations range between 5-25 dBz, although flocks of over 1,700 birds have caused readings around 30 dBz. Swarms of insects can distort the apparent size of bird migrations. To a lesser extent, so can bats. Signatures from pollen and dust reliably travel with the prevailing wind. At around 950 mb, roughly 2,500’, birds migrate around 15-20 KT faster than the prevailing wind. Velocity imagery is used to distinguish the signatures.

As Hurricane Matthew pushed northward along Florida, a flock was widely believed to have been caught in his eye. The signature was likely from larger birds, as smaller species would have struggled to stay aloft in such close proximity to the 120 mph winds and torrential rains. 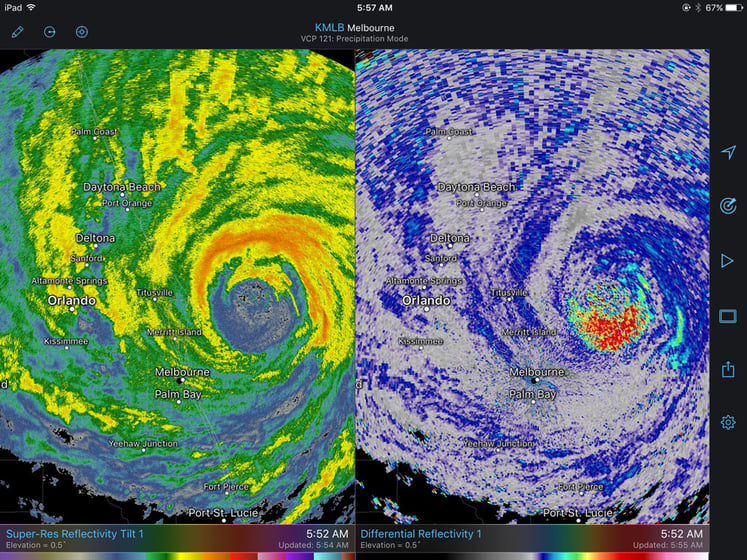 Bird migration forecasts are produced by the Cornell Lab of Ornithology in the spring and fall. Locking down on seasonal variations in bird migration predictions can help prevent errors made by misdiagnosing radar anomalies and help pilots keep them out of their engines. Every year, “bird strikes” are responsible for about $1.28 billion in aircraft damages globally. Observing the weather cues that signal bird migration is key in predictions because our avian friends depend on decent weather perhaps more than we do.