The Formation of Hurricane Matthew

The formation of Hurricane Matthew, like other hurricanes, depended on a union of several variables and ranges of requirements. Hurricanes are famously tropical because they require water with lots of stored energy: above 80°F.

At least 18,000 feet of humid air is also needed for fuel. If within five degrees latitude of the equator, the Coriolis force insufficiently acts on the winds, hindering the ability to spin. High-altitude preexistent winds with equalizing speeds and directions prevent too much wind shear from offsetting the equilibrium and forcing the system to dissipate. Instability is needed to allow air to rise into a zone of high pressure just above the storm, which pumps air up through and then away from the eye. Pre-existing, converging surface winds are needed to direct air into the convective instability near the eye. Their demise occurs after prolonged traveling over land due to inward-oriented surface friction breaking down the cyclostrophic balance. Water depths over 200 feet virtually eliminate surface friction, making them the final known necessity. A plus for hurricane formation is that, especially near the peak of hurricane season, the necessary earthly resources typically aren’t scarce. 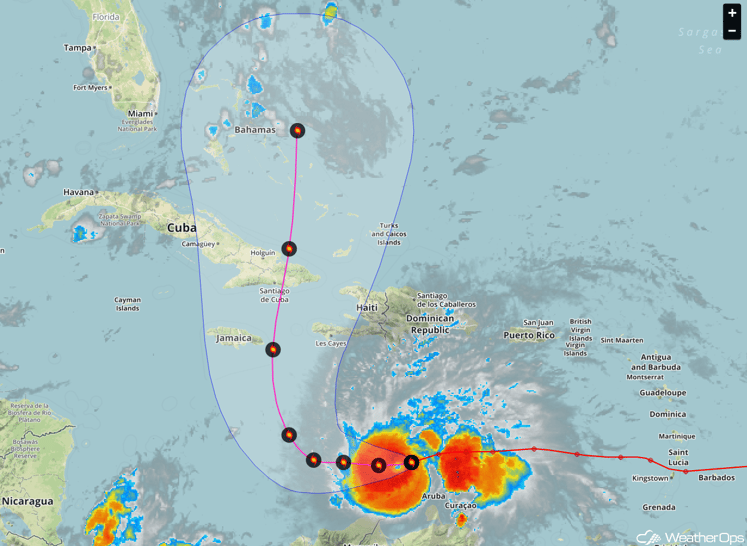 Their core functionality emerges in their infancy, when they become rotating, self-sustaining low pressure systems called tropical depressions. If the atmospheric engine grows and intensifies, a tropical storm forms, rife with mesoscale squall lines. Further intensification yields a hurricane, typhoon or a cyclone, depending on the region of the Earth where it’s born.

Today's Poll: How strong do you think #Hurricane #Matthew will get? #thinkweather

The formation of Hurricane Matthew, as with other systems, started with low-level convergence - such as from a tropical wave - and the required essentials, which happened and were gained before he began riding the northern coast of South America. On the final day of September, warmer conditions southeast of the Gulf helped him brew into a Category 2 Atlantic hurricane while pushing westward; and soon after a Category 3 and now a Category 4 with 140 mph upper-level winds and a measured Low of 949 mb.

It’s still quite warm in the Caribbean and further intensification is possible, especially near Jamaica. The Bermuda High likely won’t push him much farther westward but he still stands a strong chance of impacting Cuba and the East Coast due to his current longitudinal position - south of Haiti - and the future positioning of the jet stream, which may work to enhance outgoing upper-level flow and reinvigorate him by the end of next week.