Should You Trust Year Ahead Forecasts?

There’s a reason physics-based Numerical Weather Models exist compared to “math based” or statistical weather models. We refer to these as climatology based forecast systems. Statistical models rely on the fact “normal” is something that will occur a majority of the time. We all know what a typical winter or summer is like where we live. The problem is being right most of the time isn’t the same as being right when it matters. Think about it, do you care if a meteorologist accurately predicted the high and low temperature in areas like Hawaii for 60 straight days? It’s not that difficult to do when the weather tracks climatological norms and doesn’t vary. However, when considering all the variables in play, forecasting winter storms and precipitation a year ahead for a specific location can be exceedingly unrealistic.

Why forecasting weather “Normals” is a disservice to Growers

Statistical models fall apart when chaotic pattern recognition can drastically change the outcome of a season above or below the climatology. Using these types of forecasts is not a good idea, just look at what happened in New England last winter. Based on the 43.8 inches that fell in Boston in 2013-2014, some forecasted snowfall a year ahead for Boston (2014-2015) would vary between 32.85 and 54.75. 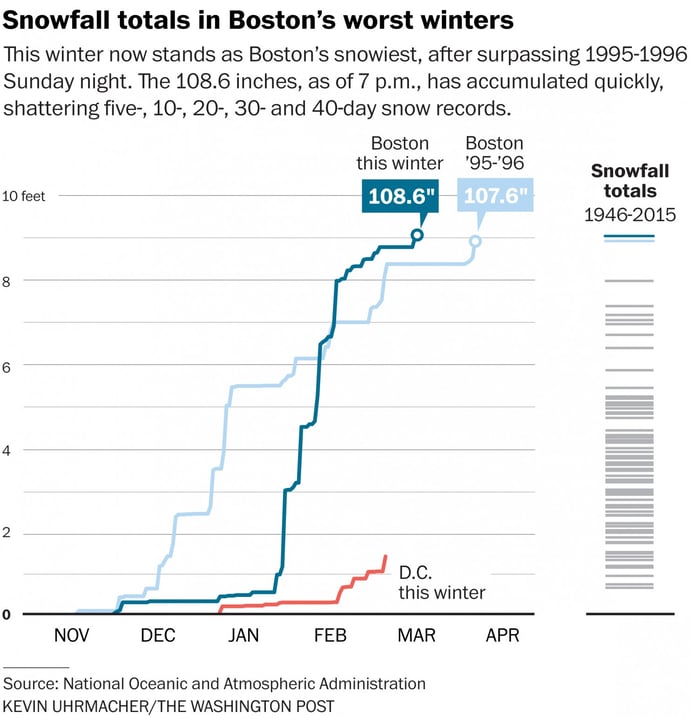 The Reality: Anyone living in the Northeast knows what happened. They were hit with the highest snowfall on record - 110.6 inches in Boston alone.  In February, an additional 64.8 inches fell in the same area. This is a prime example of where statistical models fail. Meteorologists picked up on a pattern change 30 days ahead of time, but no statistical model could have forecasted what happened in February.

Stick with Meteorologists. There are weather providers in the marketplace forecasting $7 corn prices within the next year. While this may generate plenty of buzz, it strays from what meteorologists are in the business of doing.  At WDT, our focus is on providing the most accurate weather analytics available to those whose job it is to make such a commodity forecast (AKA not meteorologists). The reality is, going beyond even 14 days for a single location means you have just as much chance to get the forecast correct as winning a coin toss.

The good news is there are meteorological groups doing great work.

Frontier Weather Services provide long range forecasts (up to a year out) by using climate models and peer reviewed forecasting techniques that can give growers an idea on how the growing season will progress. The reason why skill exists is that they have the ability to forecast a large area (such as the eastern seaboard) and if it will be warmer or wetter than normal.