Salt in rain is notorious for corroding materials at sea and ashore. Salt in water is responsible for around 30% of failures on ships and other marine equipment. Without a preventative measure, such as a pre-applied oxide film, corrosive aquatic materials are threatened by water, especially ocean water - a solution that contains around 3.5% salt.

Why Is Saltwater Corrosive?

Saltwater and freshwater both lead to corrosion, but the chemistry involved is different. While saltwater bears less oxygen, which naturally hinders corrosion, electrons transfer more efficiently through water that contains electrolytes, such as saltwater. The dissociated ions that compose sea salts are particularly efficient catalysts for many of the electrolysis reactions involved. Saltwater with lower oxygen counts and higher salt counts, such as those found a few miles deep, progressively hinders corrosive reactivity. 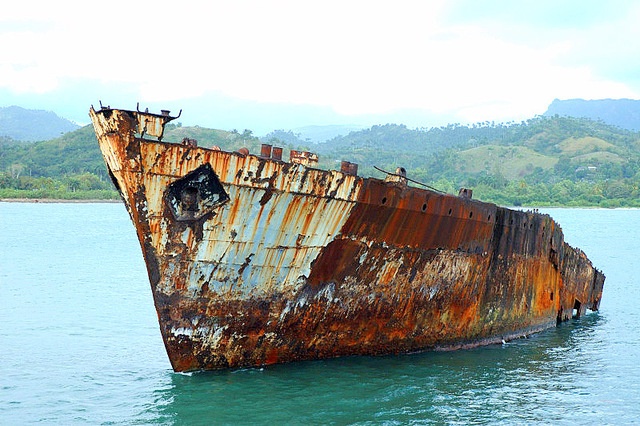 Unique materials interact with water of varying pH levels in different ways. When iron contacts a water droplet, the droplet becomes a voltaic cell in contact with metal, which oxidizes the iron, entailing a loss of electrons to the oxygen molecules in the water.

Is Rain that Falls over the Ocean Salty?

Rain that falls over the ocean is typically salty, but minutely fractionally as salty as seawater. The process that makes it includes a starring role for salt.

Before rain can form, clouds must form, which requires reaching water vapor saturation. When water vapor condenses onto something called condensation nuclei, 78% humidity is a good rule of thumb for the minimal amount of airborne moisture for clouds to begin to form. Condensation nuclei can be dust, smoke, salt, sulphates from phytoplankton and other particles cast into the atmosphere. Without them, the humidity must rise to virtually 100% for cloud formation.

When surrounded by moisture, some airborne particles, such as oils, paraffin waxes and gasoline, are hydrophobic - water-repelling - while others are more hygroscopic - water-seeking. Sea salts sprayed by crashing waves and lofted are distinctly hygroscopic and evidence of this can be found clogged in the holes of a salt shaker that’s been stored in high humidities.

The abundance of available moisture and the hygroscopicity of sea salt make many cloud droplets, particularly when the air is cool because it helps water vapor make the jump down to liquid water and slows evaporation rates. The largest droplets survive and grow into drops as they’re integrated by gravity and winds. Typically there are fewer condensation nuclei over the ocean than found in the much more polluted air ashore, so the nuclei that are present are permitted to collect more water, enlarging their diameters.