If Blizzards, Blasts, McFlurrys and Frostys weren’t enough to tempt your winter season palette, we bring you the deep-freeze deliciousness of Polar Vortex! Those icy wind swirls of cold surge, slap-in-the-face goodness. The one a rather blustery national radio host once said was something meteorologists “created for this week.”

To be honest, the polar vortex is not a frozen dessert item, but it’s not a recent term concocted by the meteorologists either.

The winter of 2014 will long be remembered for two occurrences – “polar vortex” became a household term in the U.S., and those that passionately advocate for science literacy realized that our efforts were in the deep freeze.

Although “polar vortex” became the talk of our nation beginning in 2014, our literary friend Mr. Charles Dickens was writing about the general circulation of the global atmosphere in a publication aptly named “Household Words” in 1853. The article was entitled “Air Maps,” and he used the term “great polar vortex” to explain the air circulation features located at both the north and south poles. 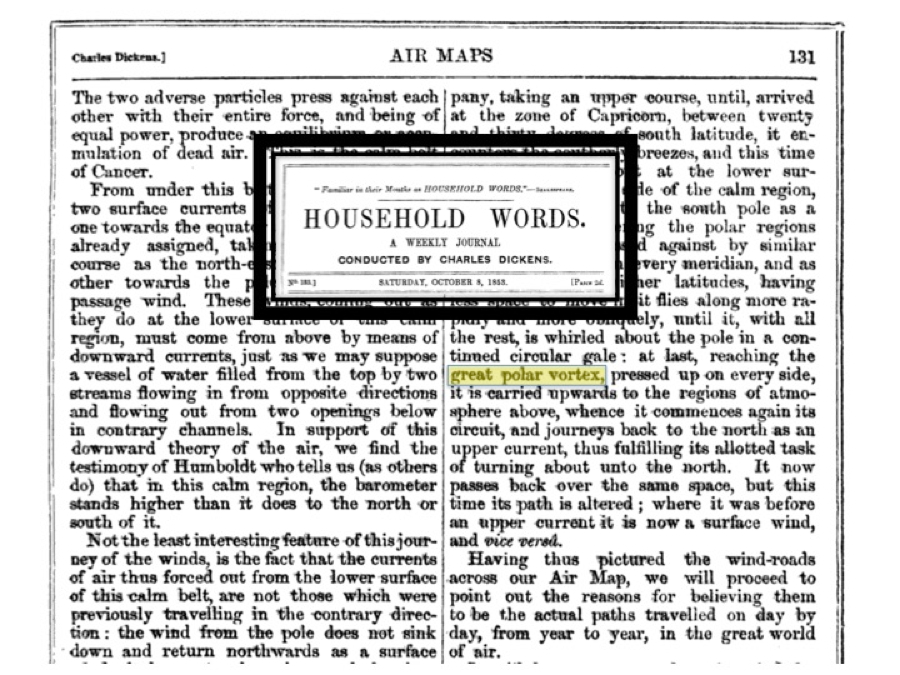 Exploration of the solar system reveals that each rotating celestial body with an atmosphere has polar vortices, just like earth. Many meteorologists have devoted years of study to these vortices, including the iconic Carl Gustav Rossby who wrote about them in 1948. Rossby is the only meteorologist to appear on the cover of Time Magazine. 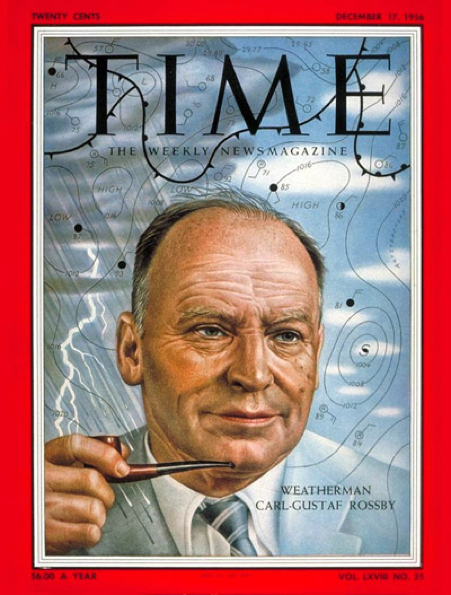 The global atmosphere is a complex fluid of interacting air streams. Think of it as highway system, or those pretzel-like, mix master interstate highway exchanges that route traffic in different directions. The polar vortex is an atmospheric thoroughfare that routes cold air around the planet, but without painted lane lines or guardrails! Depending upon the conditions at the pole, the vortex can strengthen, weaken, meander or even take detours.

Specifically for weather in the U.S., when cold air at the North Pole is very deep and very strong, it becomes very difficult to move. That means there is less arctic air plunging across the entire U.S. and into the Deep South. However, if the cold air at the North Pole is not quite as cold, and not quite as deep, it becomes easier to move around. That makes for many, but usually short-lived (a couple of days at a time), arctic cold air intrusions into the lower 48 states.

Think of the earth as this stack of pancakes. If you freeze the pad of butter first, it stays on top of the pancakes for a much longer period of time. Frozen pads of butter are really hard to spread around, even on warm pancakes (experience talking). However, if your butter is not quite as cold, it can be spread easily, and may even slide completely off the top of your pancakes. Cold air at the North Pole behaves somewhat similarly.

Know that this is an oversimplification, and there are textbooks and hundreds of peer-reviewed publications full of details if you are curious!

So why does “polar vortex” keep appearing on every television weathercast, weather article and blog? Well, it’s a daily phenomenon! The polar vortices are always there. If weather is a part of your daily conversations, then it makes sense that you should talk about things like the polar vortex, ridges, troughs, the trade winds, the inter-tropical convergence zone, divergence, convergence, condensation, precipitation, pressure, temperature, fronts, air masses, sleet, freezing rain, blizzards, record warmth in 2018 and other “household” words and topics!

Therefore, while the arctic weather gripping the country has you muttering ‘Bah Humbug,’ know that the polar vortex is no ghost! The polar vortex is a very real and long known part of our atmosphere past, present, and future.