Yesterday, we were talking about heavy snow in the Rockies. Today, we are looking at yesterday's tornadic storms in Kansas. If that doesn't say fall weather, I don't know what does! Fall is a time of change, just like spring. The weather is moving from one extreme to another and the in-between times commonly experience severe storms.

Kansas was the hot spot yesterday for tornadoes and hail. The RadarScope image below shows reflectivity and velocity data with shear contours. As a reminder, azimuthal shear is opposing inbound/outbound velocities at the same distance in nearby radials (azimuth is simply the direction the radar is looking, so azimuthal shear is the change of wind velocity with azimuth). This is the type of shear used to identify things like mesocyclones and tornadoes.

A hook develops west of Scott City and moves to the northeast. You can see more than one area where a tornado vortex signature shows up and matches the shear well. I count three rotation signatures in this loop lining up from north of Scott City to south of Oakley. The Storm Prediction Center (SPC) Storm Reports preliminary lists three tornadoes causing damage in this area.

Now, let's look at the hail contours for the same storm complex a little over an hour later. Hail of 2 inches or larger is shown in the bullseyes. This is verified with the SPC Storm Reports.

If you think this is unusual weather for October, I have some bad news for you. The southern Plains and southeast states have an average of from 2 to 8+ tornadoes during this month. 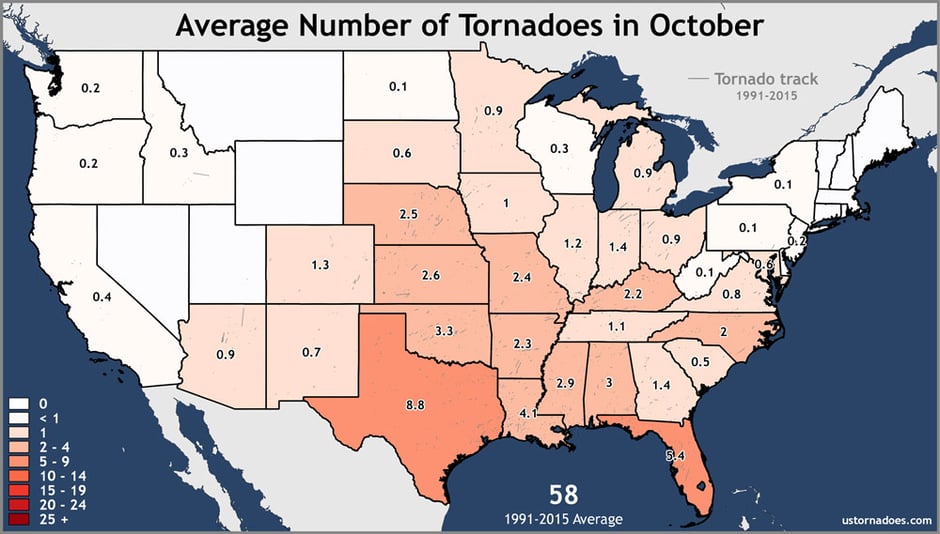 As we like to say in Oklahoma, tornado season begins January 1 and ends December 31. It's always a good idea to be prepared for severe weather.