Thunderstorms may develop across portions of North Carolina ahead of a cold front on Wednesday. A stalled front will be the focus for excessive rainfall Wednesday across the Mid Atlantic and the Northeast. A disturbance moving over the western US will allow for the development of thunderstorms across the Cascades and the Sierra Nevada Wednesday.

Thunderstorms for Portions of the Mid Atlantic and Southeast on Wednesday
A slow moving cold front will move into the region from the west today. At the same time, the atmosphere will destabilize during the day with daytime heating and cooling aloft associated with a deep trough moving in from the west. Storms are expected to develop along and ahead of the front during the afternoon hours. Some of these storms will coalesce into clusters and lines with damaging winds the primary hazard. 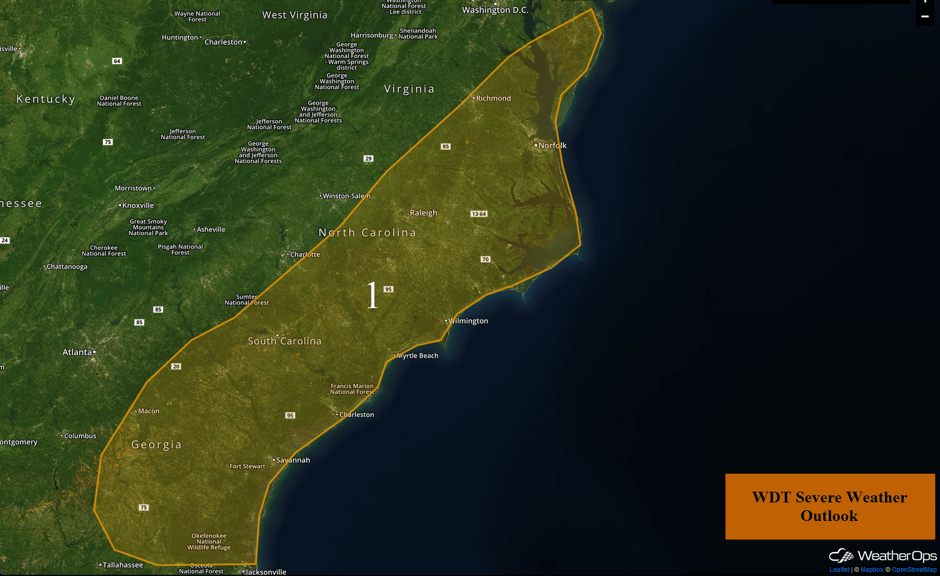 Potential for Thunderstorms Wednesday for Portions of the Northeast
A slow moving cold front will be the focus for the development of thunderstorms today. Daytime heating ahead of the front and cooling aloft associated with an upper level trough will increase instability. Storms will develop during the afternoon hours with damaging winds the primary hazard. 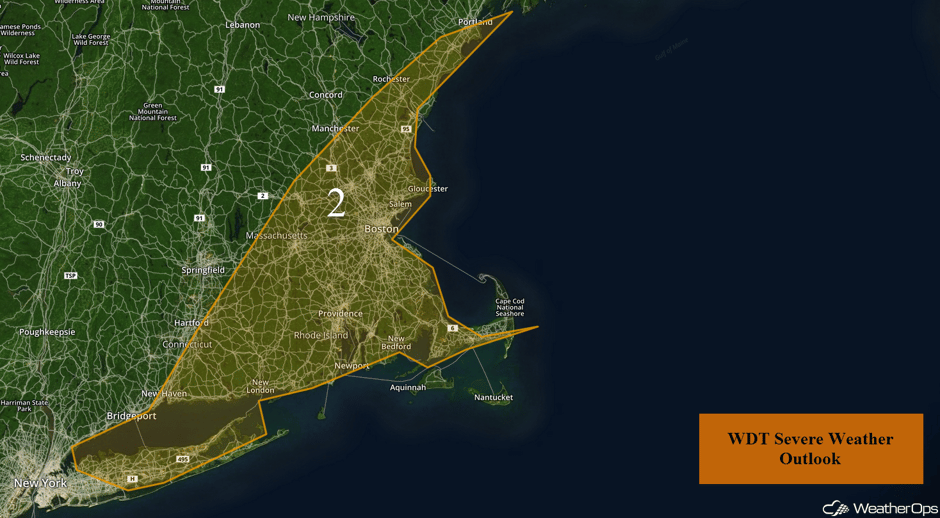 Risk for Thunderstorms for the Cascades and Sierra Nevadas Wednesday
An upper level low moving in from the west will provide lift that should allow for the development of strong to severe thunderstorms. Storms should begin to develop during the afternoon as daytime heating increases. The primary threat from these storms would be large hail and damaging winds. Storms will likely weaken with the loss of daytime heating, but should continue after dark. 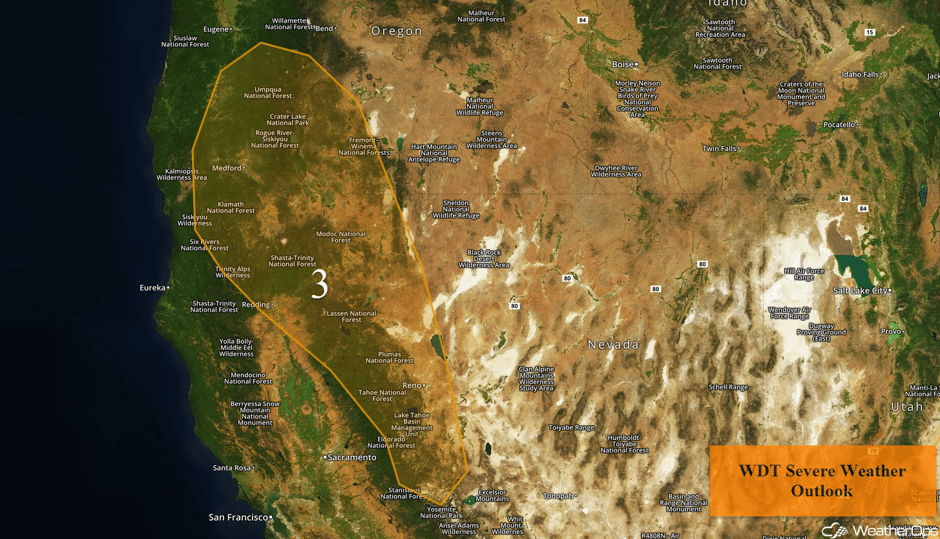 Excessive Rainfall Wednesday for the Mid Atlantic and Northeast
A stalled front draped across the eastern US will be the focus for heavy rain and thunderstorms on Wednesday. Rainfall amounts of 1-2 inches with locally higher amounts in excess of 2.5 inches are expected. This rainfall will result in the potential for flash flooding and excessive runoff. 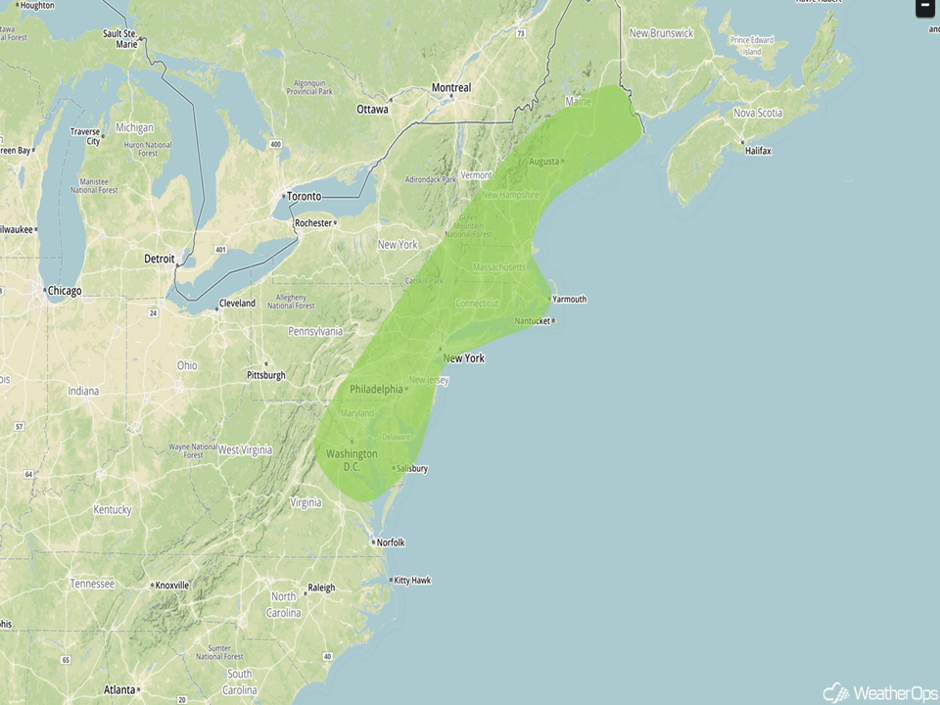 Thunderstorm Potential for the Cascades and Sierra Nevadas Thursday
A threat for isolated to scattered thunderstorms may develop across portions of the Cascades and the Sierra Nevadas as an upper level disturbance moves across the region. With daytime heating creating ample instability and lift from the disturbance, thunderstorms will increase in coverage and intensity across the region. Hail, damaging winds, frequent lightning, and heavy rain will be the primary hazards with the stronger storms.

Excessive Rainfall Friday for the Desert Southwest
As an upper level low remains offshore the coast of California on Friday, southerly low level flow will allow moisture to flow into the Southwest. With lift provided by the upper level disturbance, slow moving showers and thunderstorms are expected during the afternoon and evening. Rainfall amounts of 0.50-0.75 inch with locally higher amounts in excess of an inch are forecast. This will lead to an isolated threat for flash flooding and excessive runoff. 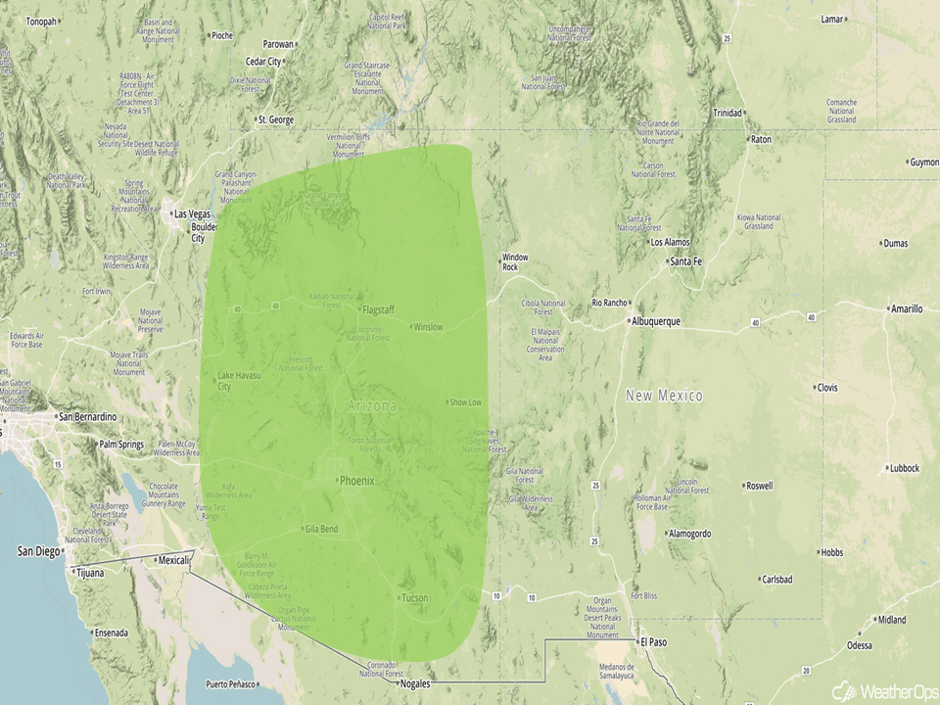 Tropical Update
Hurricane Irma (blue oval) is 140 miles east of San Juan, Puerto Rico and is moving west-northwest at 16 mph. This general motion is expected to continue for the next couple of days. On the forecast track, the core of Irma will move over portions of the Virgin Islands and pass near or just north of Puerto Rico this afternoon or tonight. The storm will be near the Dominican Republic Thursday and near the Turks and Caicos and southeastern Bahamas late Thursday. Maximum sustained winds are near 185 mph with higher gusts. Some fluctuations in intensity are likely during the next day or two, but Irma is expected to remain a category 4 or 5 storm over the next few days.

Tropical Storm Jose (red oval) is located 1135 miles east of the Lesser Antilles and is moving west-northwestward at 17 mph. Sustained winds are at 70 mph and Jose is expected to become a hurricane later today.

Tropical Storm Katia (green oval) is 175 miles north of Veracruz, Mexico and is slowly moving to the east-southeast at 5 mph. Maximum sustained winds are at 45 mph with higher gusts. Katia could become a hurricane before approaching the coast of Veracruz in a couple of days. 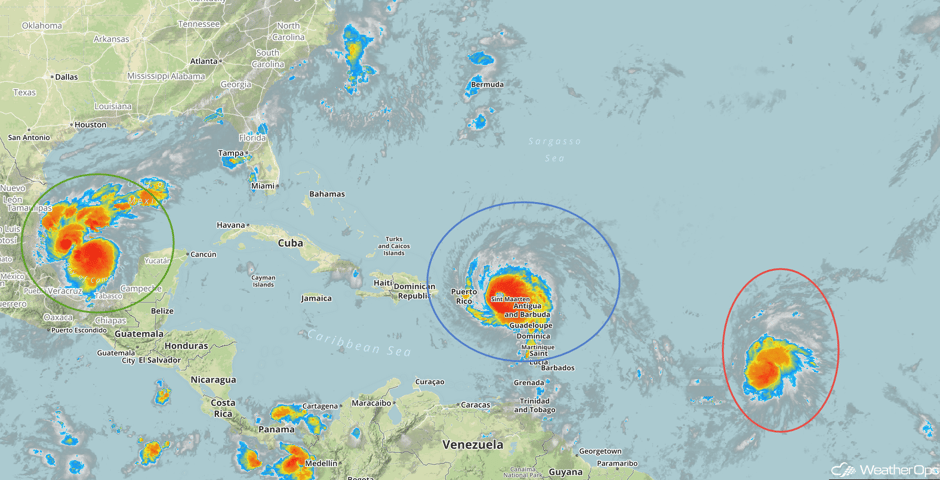 A Look Ahead
As Hurricane Irma begins to approach southern Florida, moderate to heavy rain will spread across the state during the evening hours on Saturday. At this time, model guidance continues to suggest that 2-4 inches of rain with locally higher amounts in excess of 6 inches will be possible as Irma approaches Florida, resulting in widespread flooding and excessive runoff. Into Sunday, Irma will continue making its way toward and possibly into Florida. Widespread rainfall amounts of 2-4 inches with isolated higher amounts in excess of 6 inches are forecast across much of Florida on Sunday.