A very moist and unstable air mass is in place over Region 1. A weak area of low pressure in Nebraska, a warm front extending to the northeast, and a cold front extending to the south and southwest will serve as the focal point for thunderstorm development today. Storms will likely develop during the mid to late afternoon when daytime heating will be the strongest. These storms may consolidate into clusters during the evening hours. Large hail and damaging winds will be the primary threats with these storms although a tornado, especially during the afternoon and early evening, cannot be ruled out.

Heavy rain will be possible with these storms. Rainfall amounts of 2-3 inches with locally higher amounts in excess of 4 inches will be possible, in addition to the localized flooding and runoff.

Strong to Severe Thunderstorms Possible Across the Central Rockies on Thursday

Showers and thunderstorms, some severe, will be possible on Thursday downstream from an area of low pressure moving through the Pacific Northwest. At the surface, a cold front will be the focus for thunderstorm development. Severe winds and small hail will be possible.

Strong to Severe Thunderstorms Possible Across the Upper Midwest on Thursday

The remnants of a stationary front over the Upper Midwest may allow for a few strong to severe thunderstorms to develop during the afternoon and evening hours. Severe wind and isolated large hail will be the primary hazards with the stronger storms. Activity should gradually weaken by or just after dark.

In addition, heavy rainfall amounts of 2-3 inches will be possible, especially along the Minnesota and Iowa border. 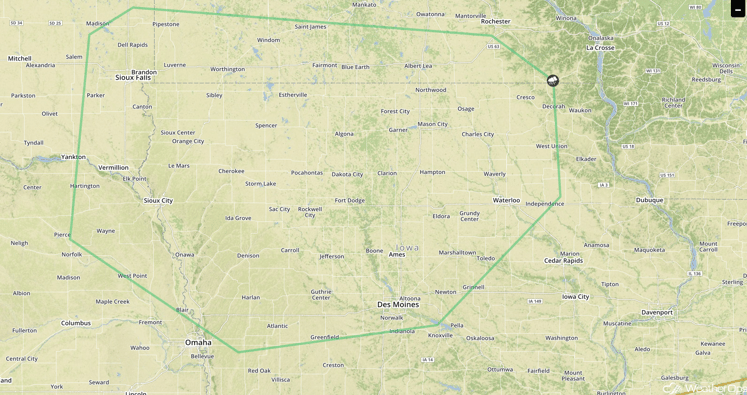 A developing surface low over the Colorado Front Range will result in enhanced southeasterly winds across the High Plains. This should promote the development of isolated to scattered thunderstorms, some possibly severe, with a primary risk for severe wind and hail during the late afternoon and early evening hours on Friday.

Tropical Storm Lisa (green oval) is continuing to move toward the northwest at 8 mph. This motion is expected to continue over the next few days with a slight increase in forward speed. Maximum sustained winds are near 50 mph with higher gusts. Some strengthening is expected today with gradual weakening expected to begin on Thursday.

Further to the west, Tropical Storm Karl (red oval) is now a Tropical Depression moving west-northwestward at 9 mph. A turn to the northwest and an increase in forward speed should continue through early Friday. Maximum sustained winds are near 35 mph with higher gusts. Little strengthening is expected on Wednesday, but some strengthening is forecast on Thursday.