A cold front will be the focus for the development of thunderstorms Wednesday across the Northern Plains. The risk for excessive rainfall will continue along the Texas coast through Thursday as tropical moisture continues to stream into the region. Hurricane Florence is moving northwestward at 15 mph with maximum sustained winds of 130 mph. 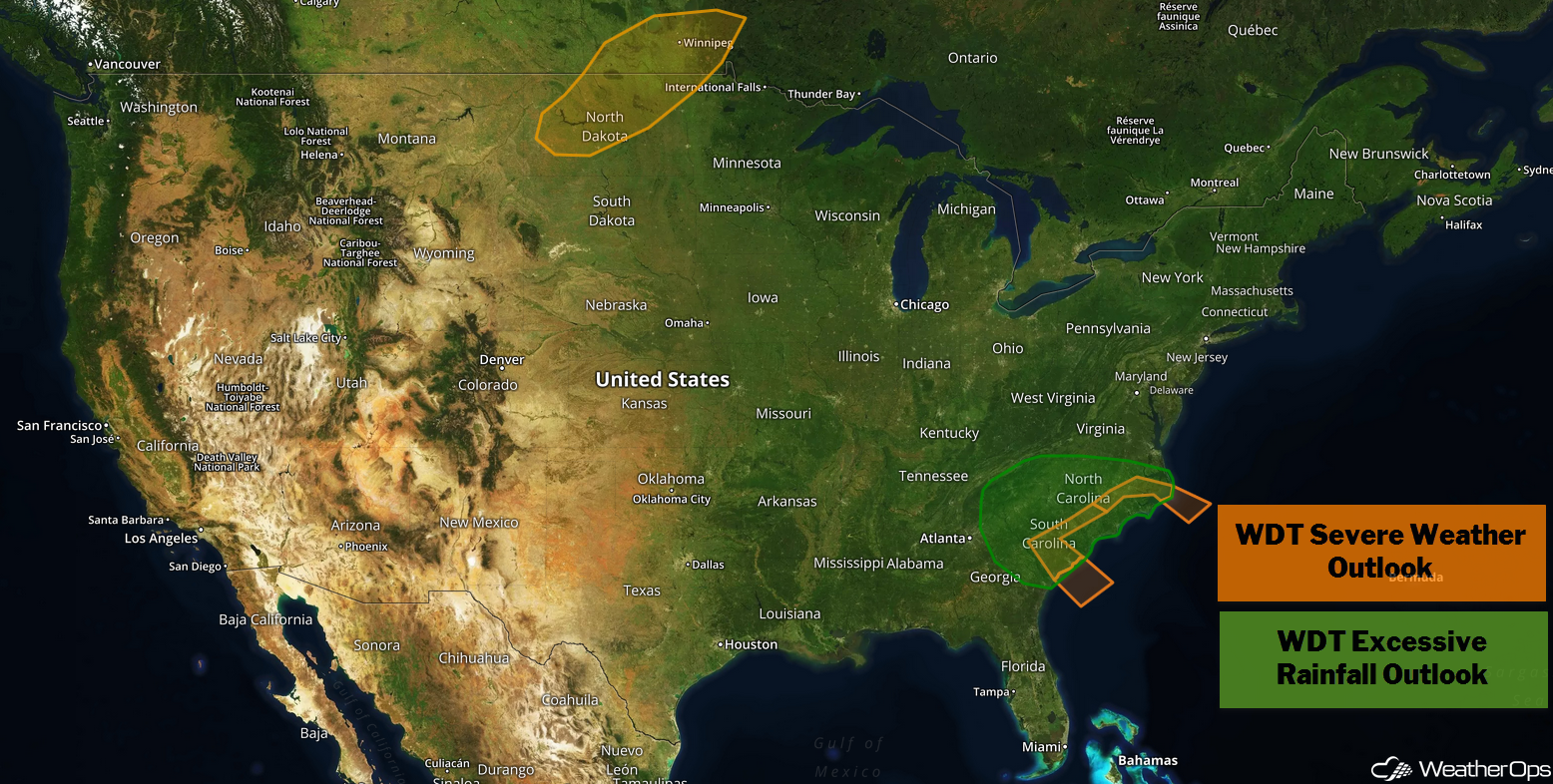 Potential for Thunderstorms across the Northern Plains on Wednesday
Scattered thunderstorms may develop this afternoon ahead of a cold front. These storms will likely form a cluster and progress through North Dakota. Hail will be the primary hazard, but the strongest storms may pose a damaging wind risk. 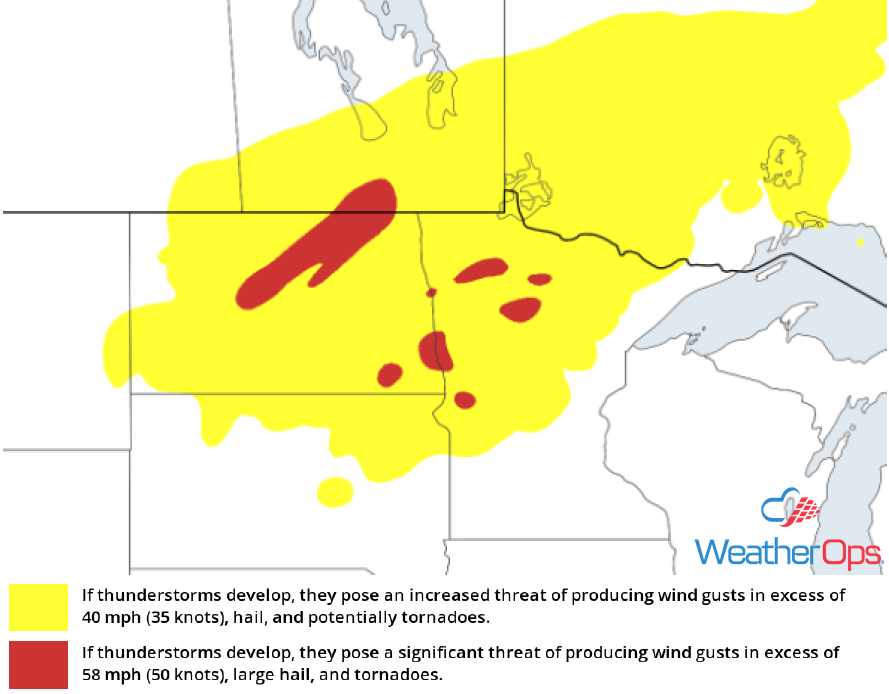 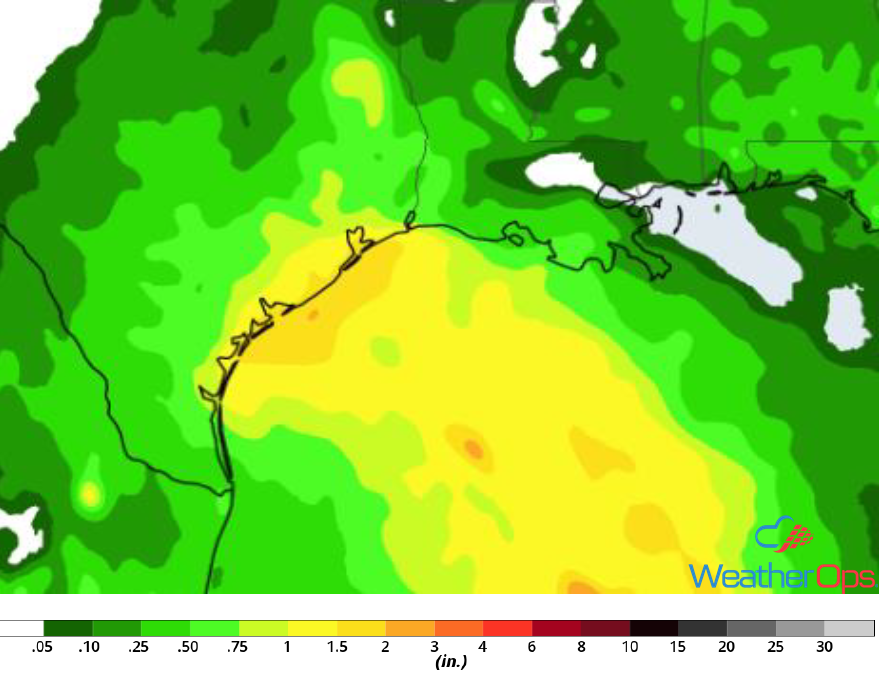 Thunderstorms for North Carolina and the Mid Atlantic Thursday and Friday
Scattered severe thunderstorms are forecast beginning Thursday evening in association with the convective banding of Florence. A few tornadoes and/or waterspouts are likely due to the favorable wind shear in the right front quadrant of the storm as it approaches shore. Major hurricane force winds and wind gusts are expected as Florence makes landfall. 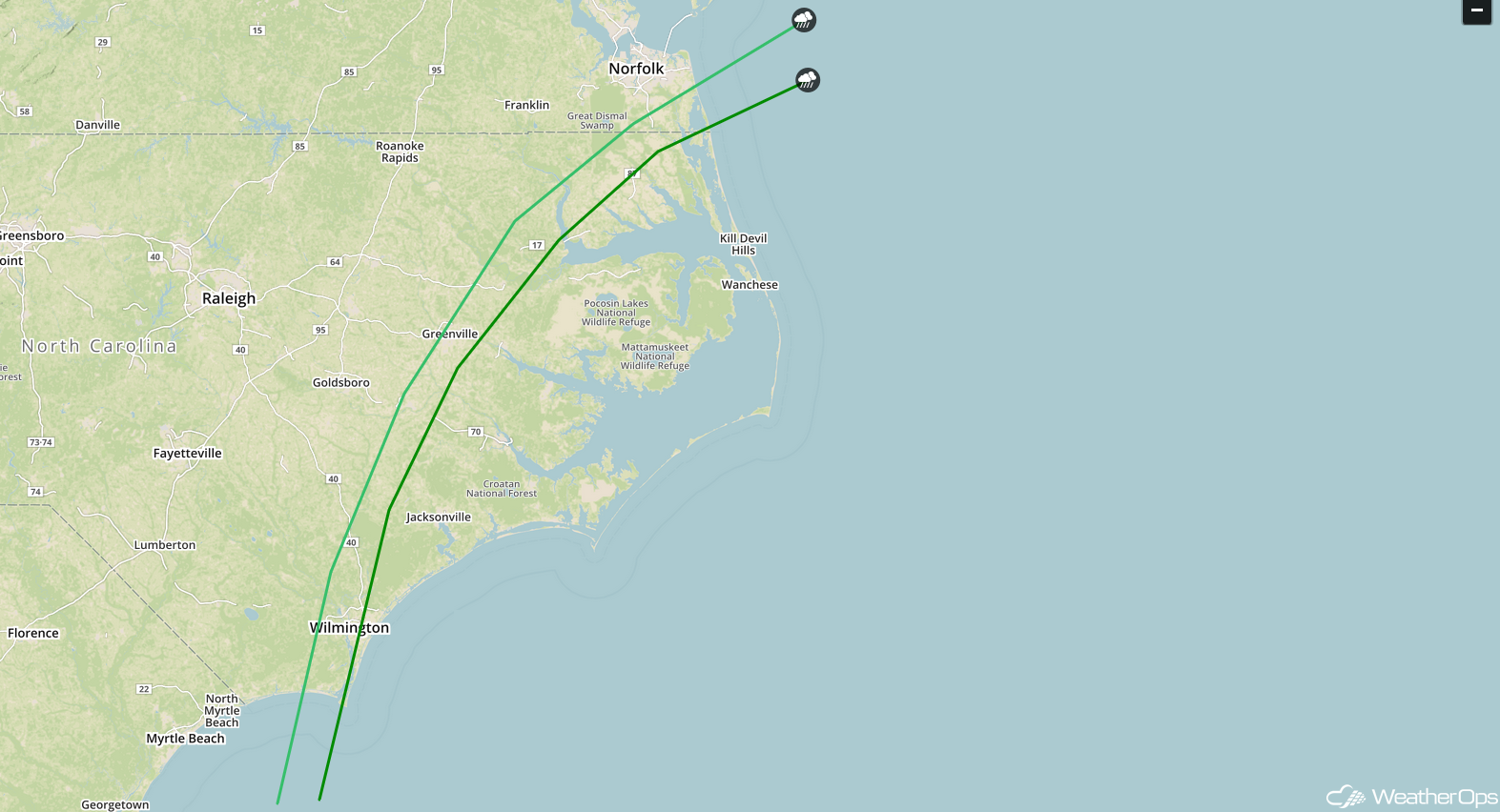 Excessive Rainfall Thursday and Friday for North Carolina and the Mid Atlantic
Prolific and catastrophic flooding is expected across North Carolina and into portions of Virginia and South Carolina with approaching Hurricane Florence. The exact location of the highest rainfall amounts is uncertain at this time, but will follow where Florence makes landfall. The hurricane is forecast to stall over the region, and some model guidance suggests it taking a southward turn over the weekend, leading to more rainfall over South Carolina. Average 24 hour rainfall totals for Thursday into Friday range anywhere from 4 to 15 inches, with locally higher amounts likely. 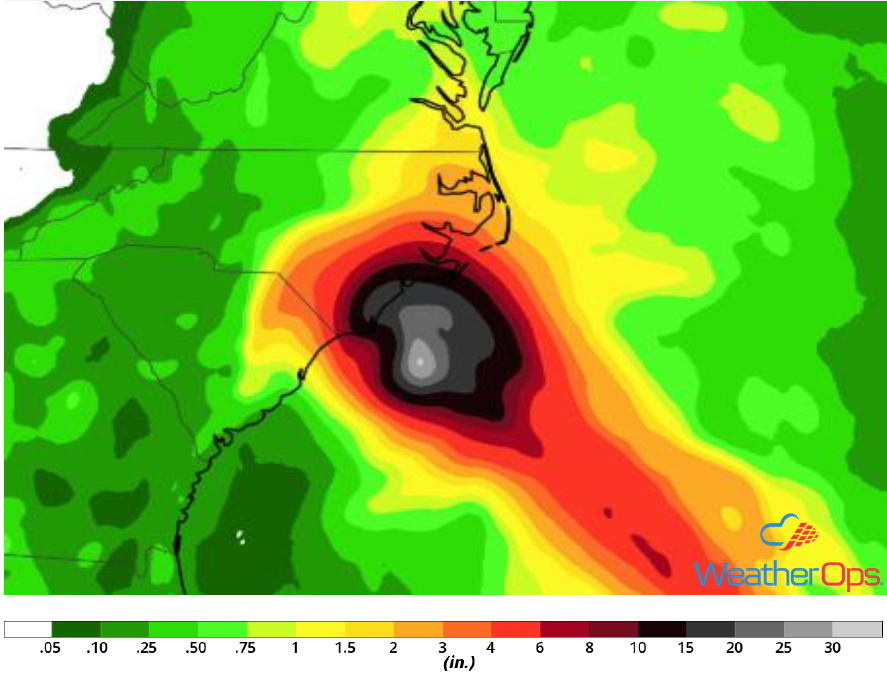 Potential for Excessive Rainfall Friday along the Texas Coast
Scattered showers and thunderstorms are expected on Friday as a tropical wave, Invest 95L, approaches. As tropical moisture streams into the region, rainfall amounts will range 1-3 inches with locally higher amounts. Flooding will be a concern given heavy rain from previous days. 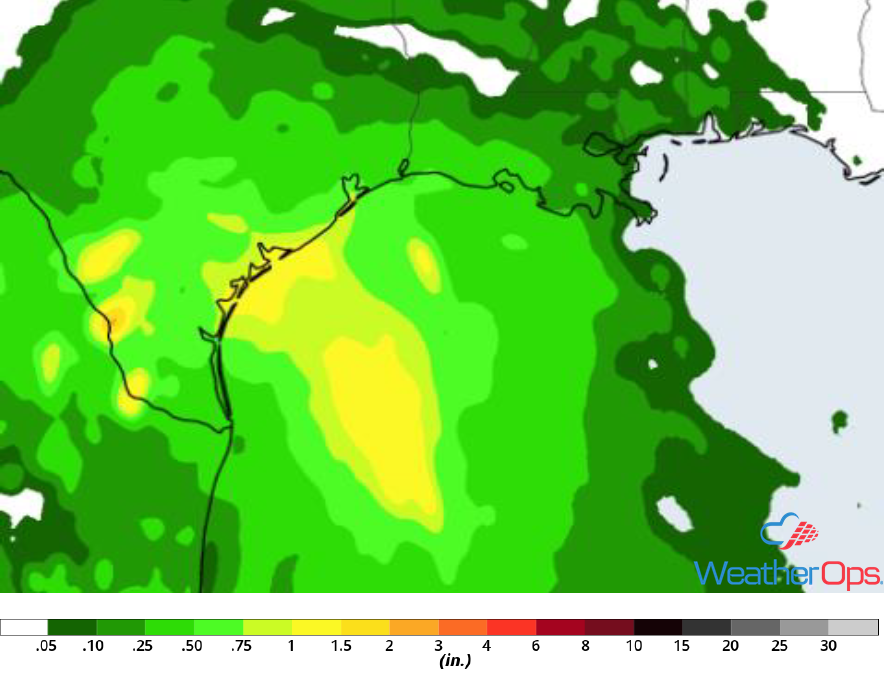 Tropical Update
Hurricane Florence (green oval) is 485 miles southeast of Wilmington, North Carolina and is moving northwestward at 15 mph. This general motion with a decrease in forward speed is expected to continue through Saturday. On the current forecast track, the center of Florence will move between the Bahamas and Bermuda today and approach the Carolina coast on Thursday. Maximum sustained winds are 130 mph with higher gusts. Strengthening is expected to continue through tonight. While some weakening is expected on Thursday, it is still expected to make landfall as an extremely dangerous major hurricane on Friday. Storm surge could be as high as 13 feet along the North Carolina coast.

Tropical Storm Isaac (blue oval) is 420 miles east of Martinique and is moving westward at 17 mph. This general motion is expected to continue through the weekend with a decrease in forward speed. On the forecast track, Isaac will move across the central Lesser Antilles and the eastern Caribbean Sea through Saturday. Maximum sustained winds are near 60 mph with higher gusts. Gradual weakening is expected during the next 72 hours.

Hurricane Helene (red oval) is 870 miles west-northwest of the Cabo Verde Islands and is moving toward the north-northwest at 14 mph. A turn toward the north and northeast is expected during the next few days. Maximum sustained winds remain near 90 mph with higher gusts. Gradual weakening is expected over the next couple of days and Helene is expected to become a tropical storm on Thursday.

Cloudiness and showers associated with an area of low pressure in the south-central Gulf of Mexico (orange oval) have decreased since yesterday. Upper level winds are forecast to become more conducive for development and a depression could still develop Thursday or Friday before the system reaches the western Gulf Coast. Regardless of development, heavy rain is expected across portions of Mexico, Texas, and Louisiana late this week.

A non-tropical area of low pressure (yellow oval) located several hundred miles west-southwest of the Azores is producing a large area of showers and thunderstorms. This system could gradually acquire tropical or subtropical characteristics during the next few days while it meanders over the northeastern Atlantic Ocean and before it becomes absorbed by a larger trough.

A Look Ahead
Florence will continue to move across the Carolinas, Georgia, and Tennessee through Tuesday. Seven day rainfall totals will range 6-12 inches with higher amounts in excess of 20 inches along the coast, leading to catastrophic flooding.