Freezing Rain and Snow across the Mid Mississippi and Ohio Valleys through Thursday
Freezing rain and snow is beginning across the Mid Mississippi and Ohio Valleys as an upper level low tracks northward across the region. Precipitation will primarily be in the form of the snow over the Mississippi Valley Wednesday into Thursday where 4-8 inches of snow and locally higher amounts are expected. Over the Ohio Valley, a mix of freezing rain and snow is expected to begin late Wednesday over Kentucky and shift northward through Thursday. Ice accumulations up to 0.25 inch are forecast with locally higher amounts. Snow accumulations will range 2-4 inches with locally higher amounts over Indiana and Ohio. This will produce significant travel hazards and perhaps power outages within the hardest hit areas. 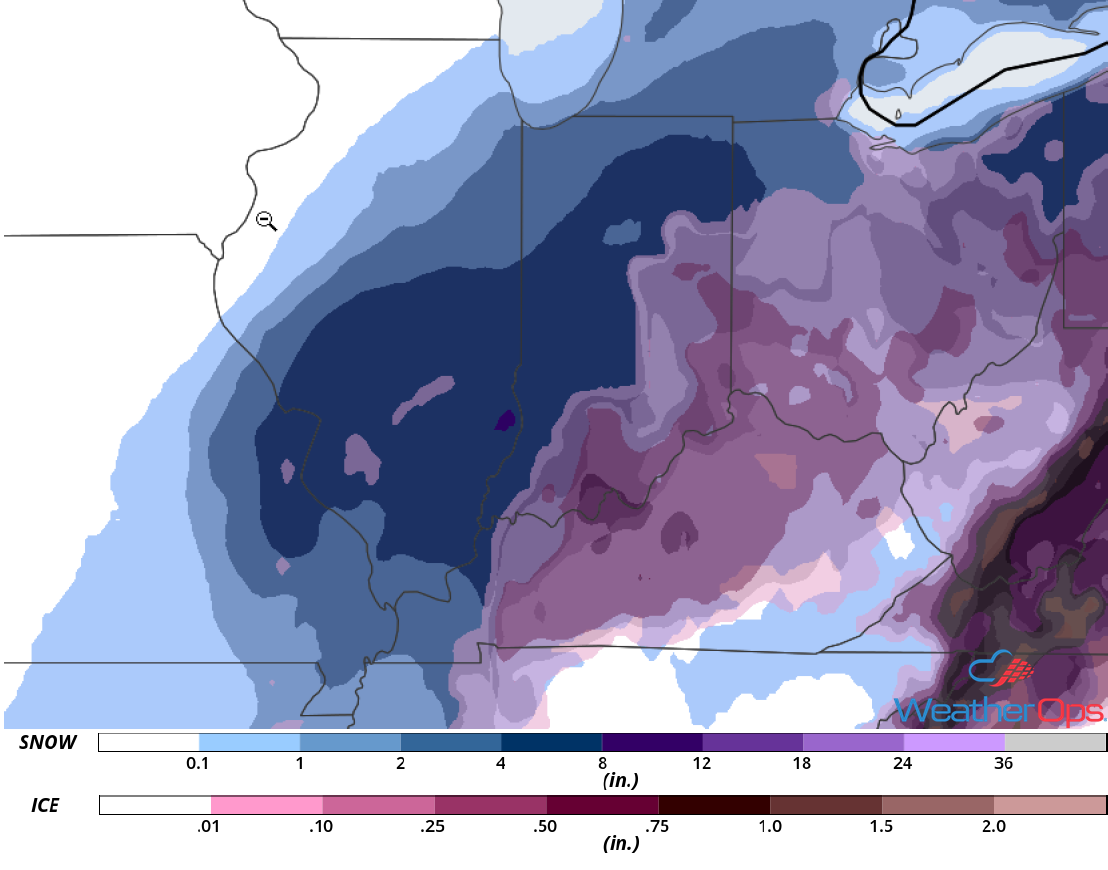 Significant Freezing Rain through Thursday for the Appalachians
A significant freezing rain event is currently developing across the Appalachians. Precipitation will begin late Wednesday and continue into Thursday, moving from north to south across the region. With freezing temperatures at the surface, freezing rain and sleet will be the primary precipitation types. Widespread accumulations between 0.10-0.25 inch are forecast with locally higher amounts in excess of 0.50 inch. This will likely result in significant impacts, including power outages and widespread tree damage, as well as nearly impossible travel over the hardest hit areas.

Excessive Rainfall across the Southeast on Wednesday
There will be a risk for excessive rainfall across Georgia and South Carolina on Wednesday as an upper level low moves into the region. Rain will increase in coverage and intensity through the evening. Rainfall accumulations of 1-3 inches are forecast across north central Georgia into South Carolina. Due to recent rains, there will be an increased threat for stream and river flooding. Within the heaviest storms, isolated flash flooding may occur. 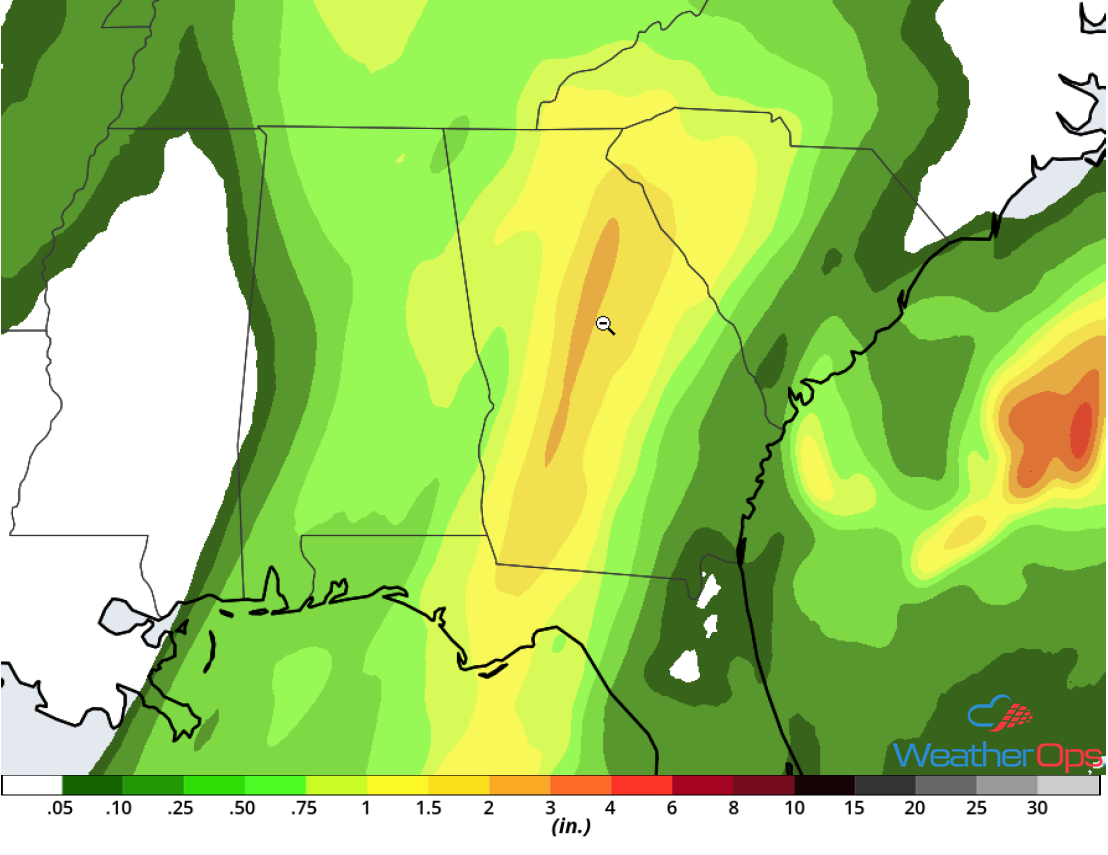 Elevated Winds and Seas through Early Thursday Afternoon across the Gulf of Mexico
Elevated winds and seas will continue across the Gulf of Mexico through early Thursday afternoon as a result of high pressure building in behind a cold front. Winds will range 25-35 knots with gusts in excess of 45 knots. Seas will range 8-12 feet near the shore and 10-15 feet in the deeper waters. 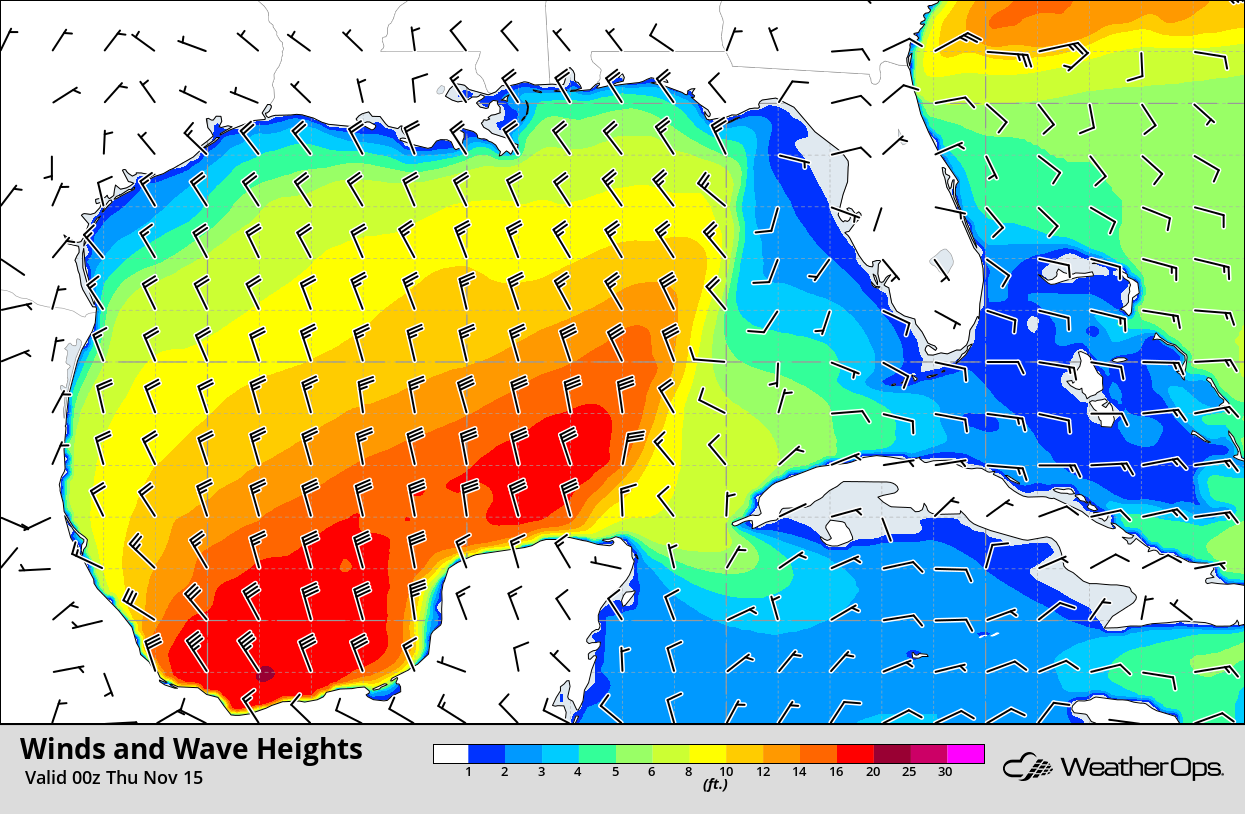 Snow for the Northeast Thursday and Friday
A strong area of low pressure will move northeastward along the East Coast Thursday and Friday, bringing a potential for significant winter weather across much of the Northeast. Precipitation will move into the region from south to north Thursday morning and move out of New England by late Friday. The heaviest snow totals are expected to be across central Pennsylvania through the Adirondacks and into Maine where snow is expected to be the primary precipitation type. Snowfall totals of 8-12 inches with locally higher amounts are expected. Closer to the coast, snow will likely mix with sleet and rain; snow accumulations will range 4-8 inches. 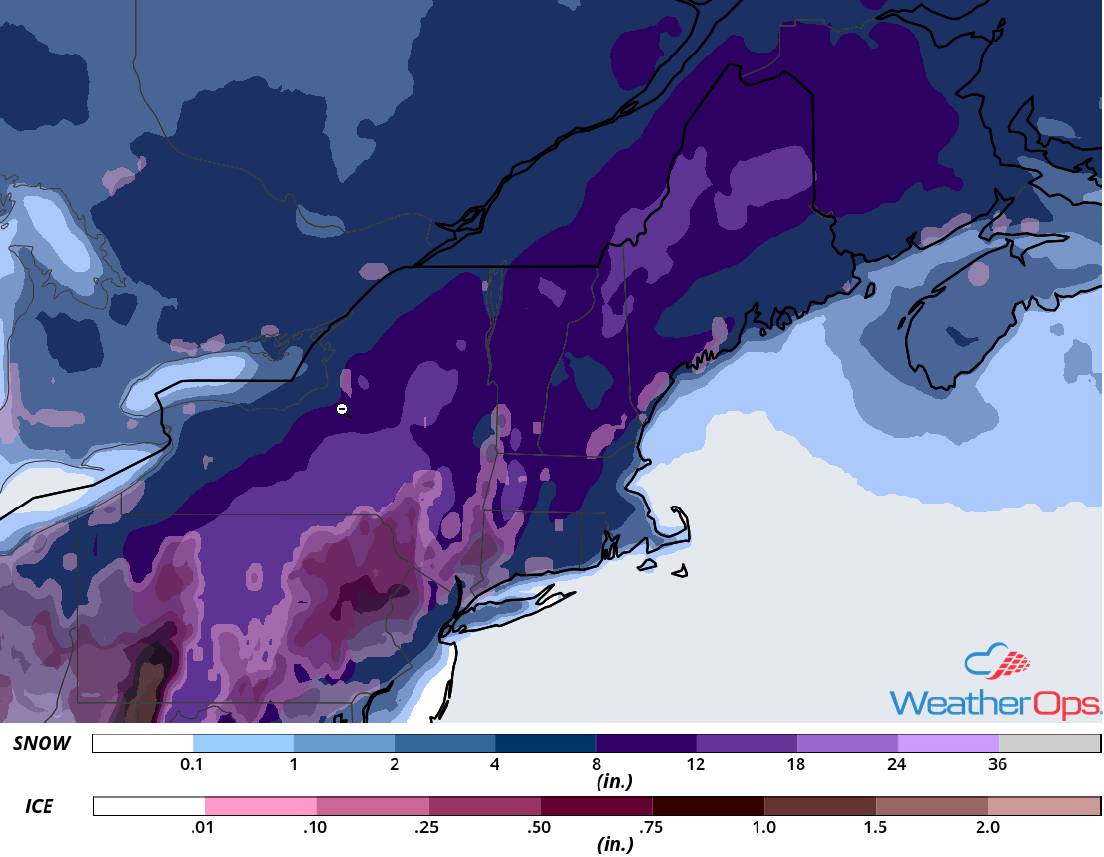 Snowfall Accumulation for Thursday and Friday

Thunderstorms Thursday for the Carolina Coast
Thunderstorms may develop along the Carolina coast Thursday afternoon and evening as an area of low pressure intensifies off the East Coast. Severe winds and isolated tornadoes will be the primary hazards with these storms. 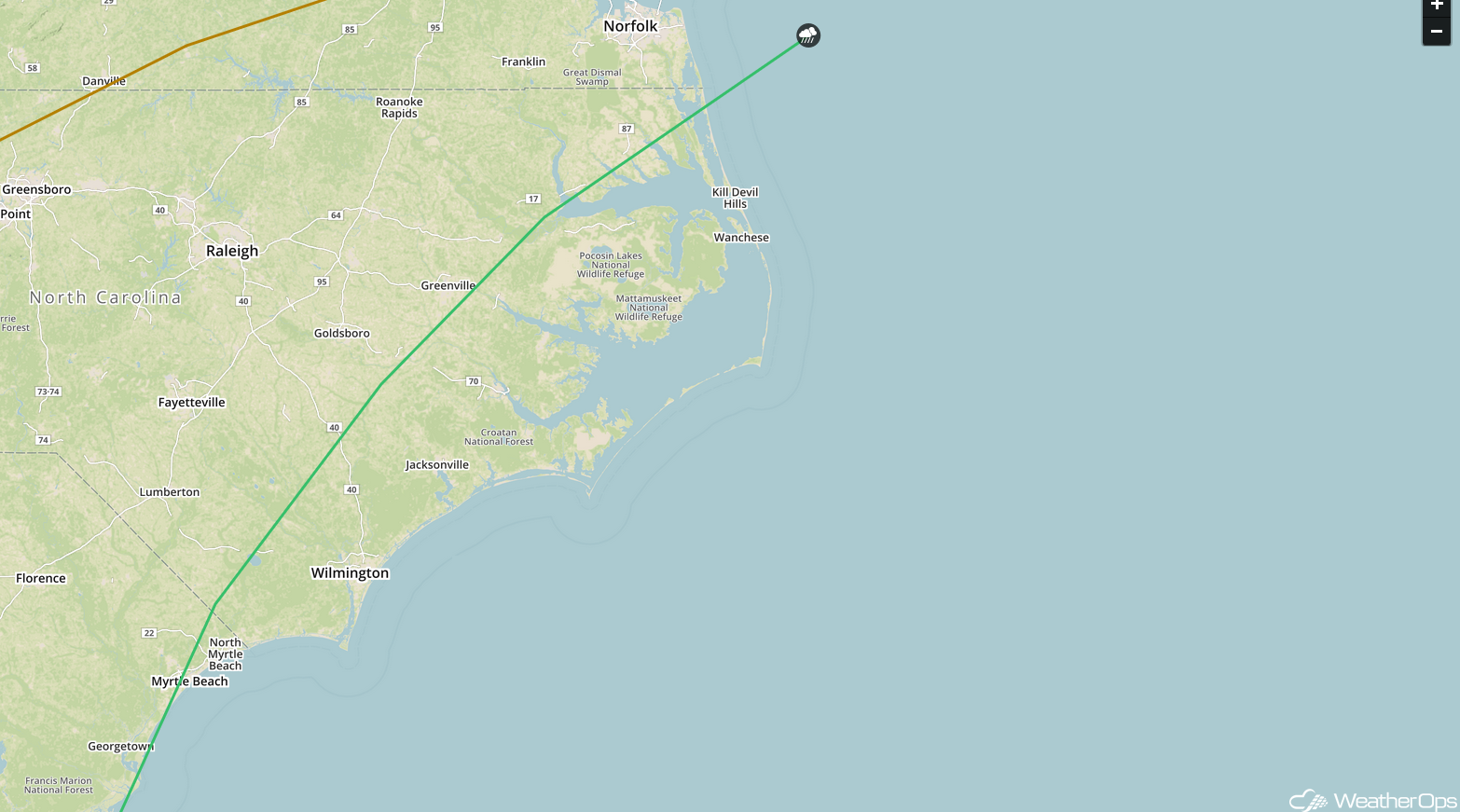 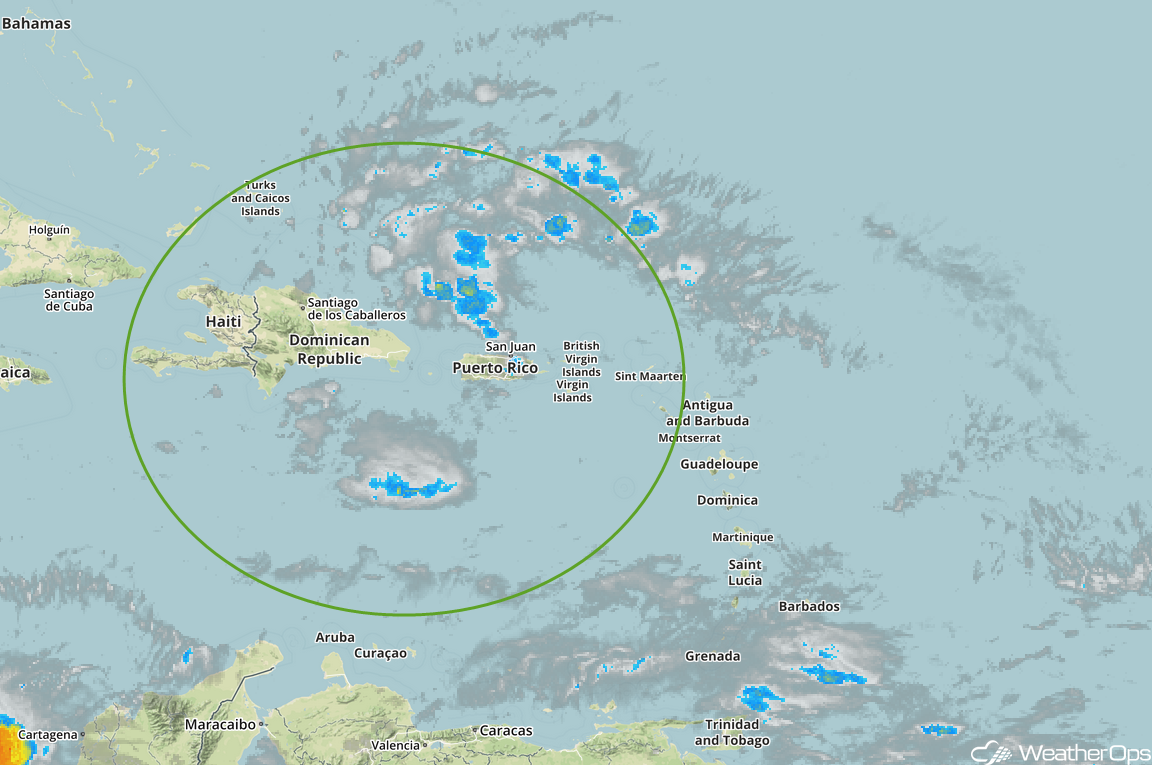