National Weather Summary for Wednesday, May 2, 2018

Severe thunderstorms capable of large hail, damaging winds, and tornadoes are expected Wednesday from the Southern Plains into the Missouri Valley in association with an area of low pressure. Thunderstorms may develop over portions of west and northwest Texas ahead of a dry line. Excessive rainfall is forecast for portions of Kansas and Missouri during the overnight hours.

Severe Thunderstorms for the Southern Plains into the Missouri Valley on Wednesday
Another day of severe weather is forecast across the Southern Plains into the Missouri Valley region today.  Storms are expected to initiate in the vicinity of a surface low over the Oklahoma Panhandle by around midday. Activity will then expand in coverage into Kansas along a near-stationary front extending into Iowa, and also southward along an existing dryline across western Oklahoma. Atmospheric conditions remain highly volatile with abundant moisture, moderate instability, and plenty of wind shear in place. Thus, storms should quickly become severe with a threat of very large hail, severe winds gusting in excess of 65 mph, and a threat for potentially strong tornadoes. Storms in Kansas will lift northeastward into Missouri and Iowa during the evening and overnight hours with a primary threat of damaging straight-line winds, but hail and a tornado cannot be ruled out. Further south, Oklahoma storms will increase in coverage during the overnight hours with a threat for severe wind and small hail. 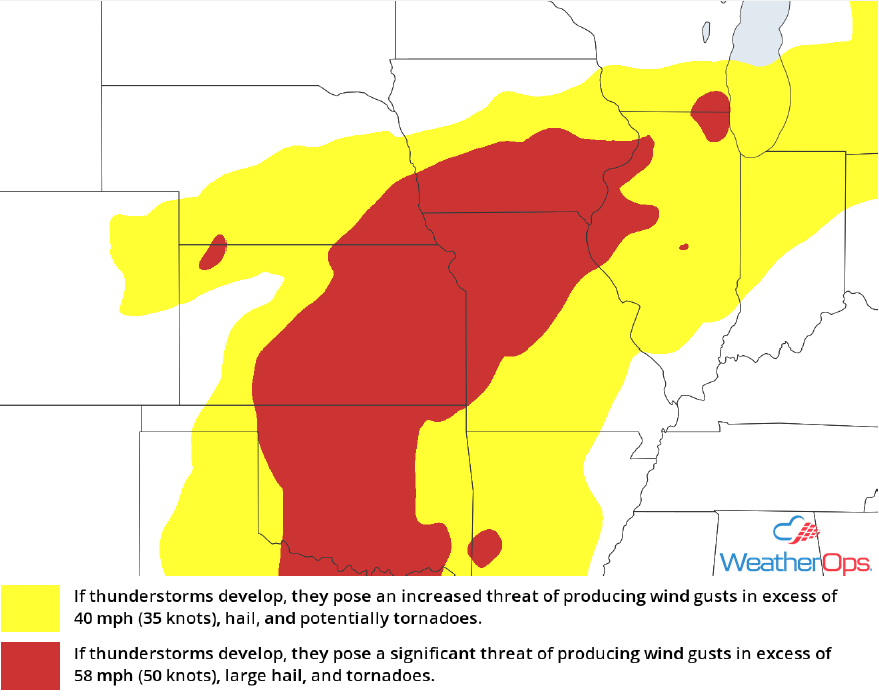 Thunderstorms Wednesday for Portions of Texas
The threat for severe weather will remain more conditional south of the Red River and across much of West Texas. A strong capping inversion will likely limit more widespread thunderstorm development, especially during the daytime hours.  However, isolated storm development remains possible and any storms that do develop will pose a threat for very large hail and severe winds. After dark, one or two lines of thunderstorm activity are likely with a threat of straight-line winds into the overnight hours. 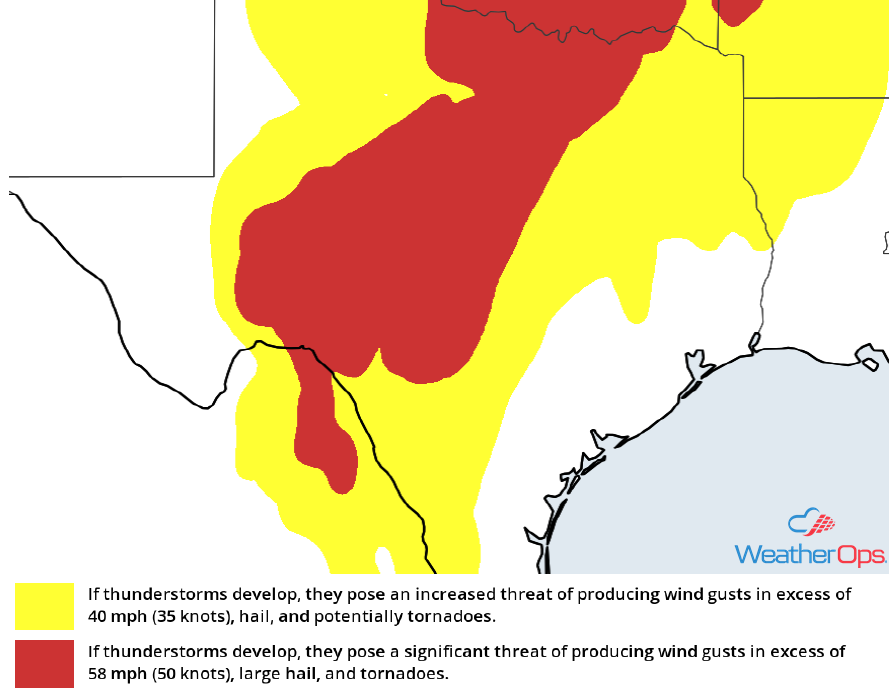 Excessive Rainfall for Kansas and Missouri Late Wednesday into Thursday
Showers and thunderstorms are forecast to develop later on Wednesday across eastern Kansas and much of Oklahoma. This activity will eventually progress eastward into portions of Missouri during the overnight hours. Rainfall totals ranging from 1.00-1.50 inches, with locally higher amounts, will pose a low to moderate threat of flooding and runoff through early Thursday morning.

Elevated Winds and Seas Continuing for Portions of the Western Gulf of Mexico through Early Thursday Evening
An area of low pressure located over the central Plains will keep slightly elevated southeasterly winds present across the western Gulf of Mexico today and Thursday. In addition, wave heights up to 7 feet will be possible. Conditions will begin to improve from east to west by the latter half of Thursday as the area of low pressure lifts northeastward across the central US. 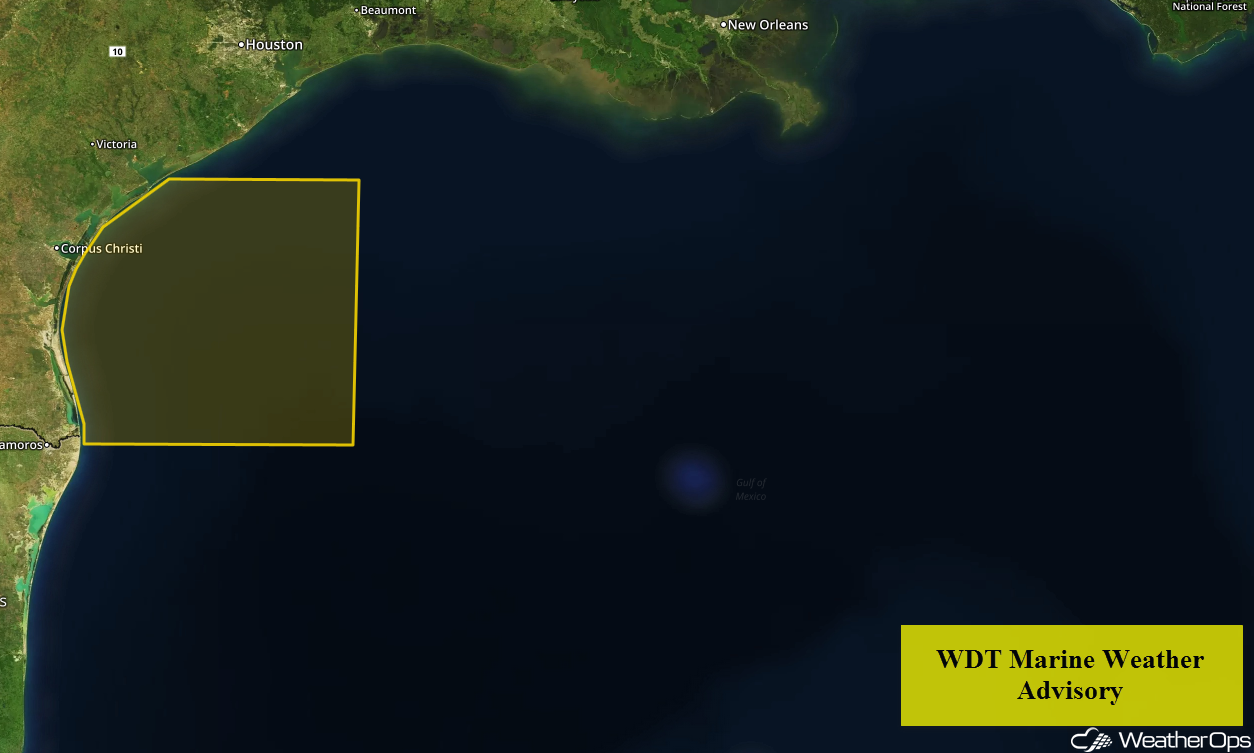 Potential for Thunderstorms Thursday for the Midwest and Southern Plains
A trough of low pressure will finally begin to depart the region on Thursday, but not before severe thunderstorms impact more of the Southern Plains and Midwest regions during the afternoon and evening hours. Unlike Wednesday, the greatest threat for severe impacts will exist within the vicinity of the upper low, which is forecast to shift over the Iowa/Missouri border. Steep lapse rates, or cold temperatures aloft due to the presence of the upper low, will support vigorous storm updrafts with a threat of large hail continuing as well another threat for potential tornadoes. Activity should eventually congeal into a squall-line with a threat of damaging straight-line winds across Iowa and Missouri during the overnight hours. 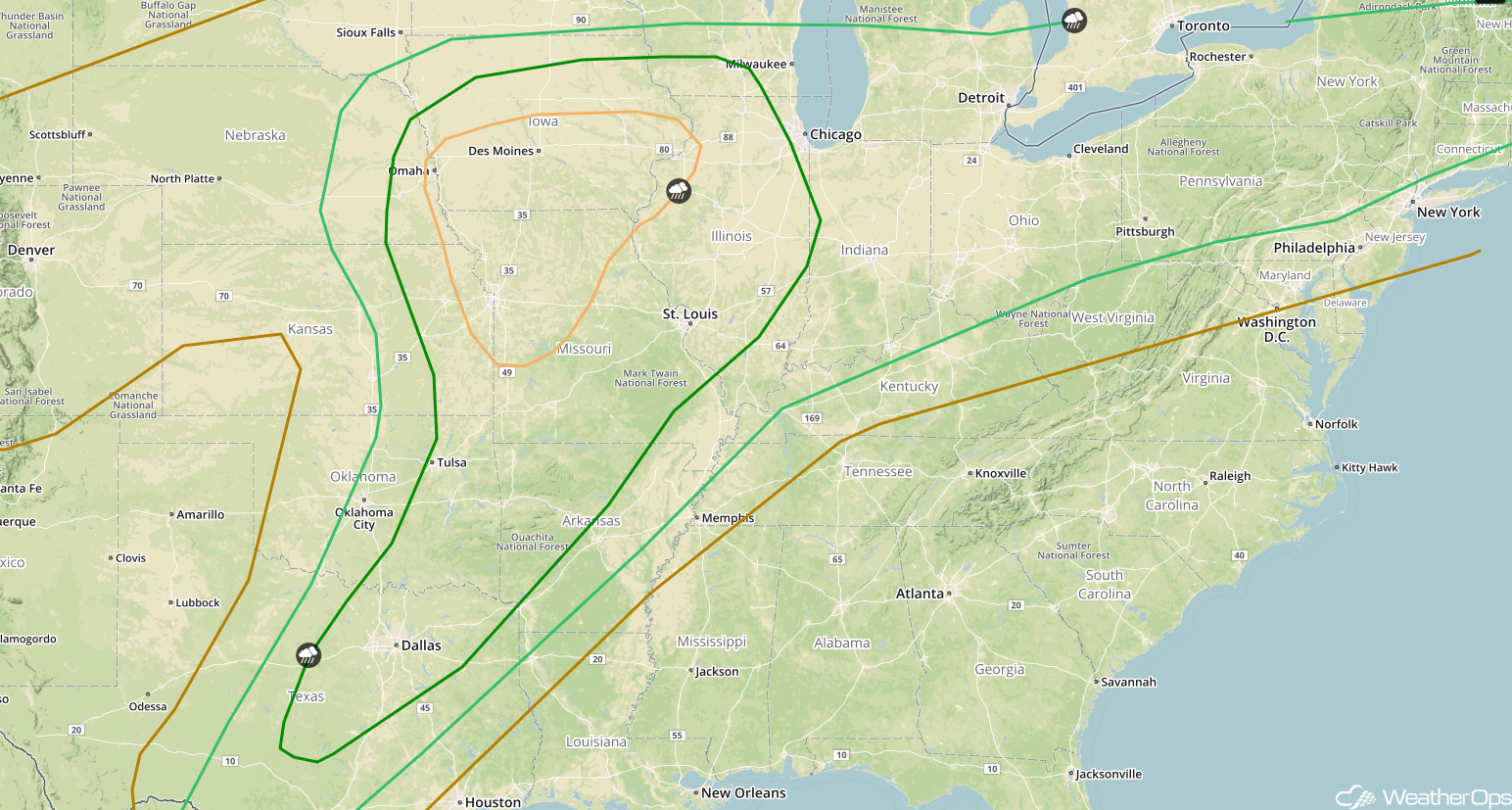 Excessive Rainfall Thursday for the Great Lakes
An upper low over the Central US is forecast to lift northward and across the Great Lakes region on Thursday.  Accompanying the low, scattered showers and thunderstorms are expected to promote minor rainfall amounts of up to an inch or more through early Friday morning. A low threat for excessive rainfall will exist as a result. 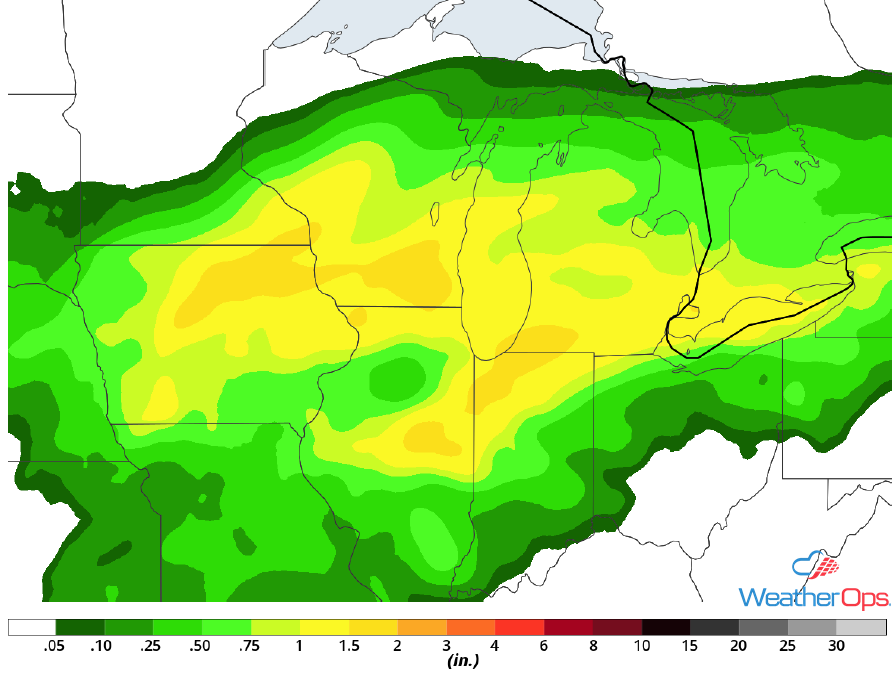 Risk for Excessive Rainfall across West Central Texas on Friday
The tail-end of a stalling front will interact with abundant moisture over west-central Texas on Friday. Periods of moderate to heavy rainfall are forecast across the outlook area through much of the day. Rainfall amounts ranging from 1-2 inches will be common, with locally higher amounts approaching 3 inches not out of the question. A moderate threat for excessive rainfall, including minor flooding and local runoff can be expected. 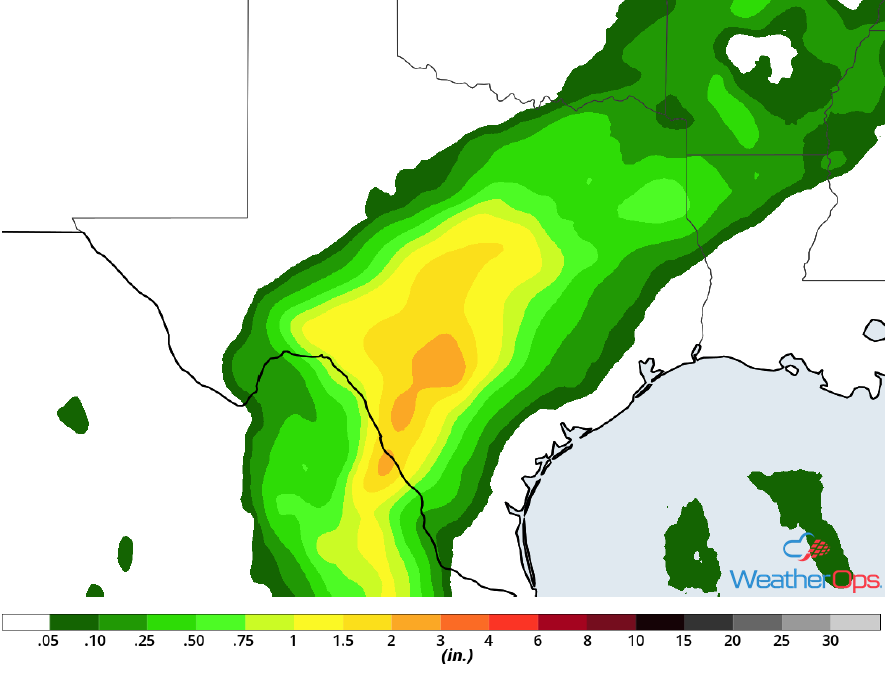 A Look Ahead
Showers and thunderstorms will move into the Southeast on Saturday as a cold front continues to move eastward. By Sunday, showers will move into the Mid Atlantic and Northeast. A few showers may develop across the Northern High Plains on Monday.