Snow will continue across the Southwest on Wednesday as an area of low pressure moves eastward. This same system will bring freezing rain and snow to the Southern Plains through Friday. Excessive rainfall is expected from the Lower Mississippi Valley to the Lower Tennessee Valley through Thursday as an area of low pressure moves northward from the Gulf of Mexico. Dense fog will continue along the Louisiana and Mississippi coasts through Wednesday afternoon. 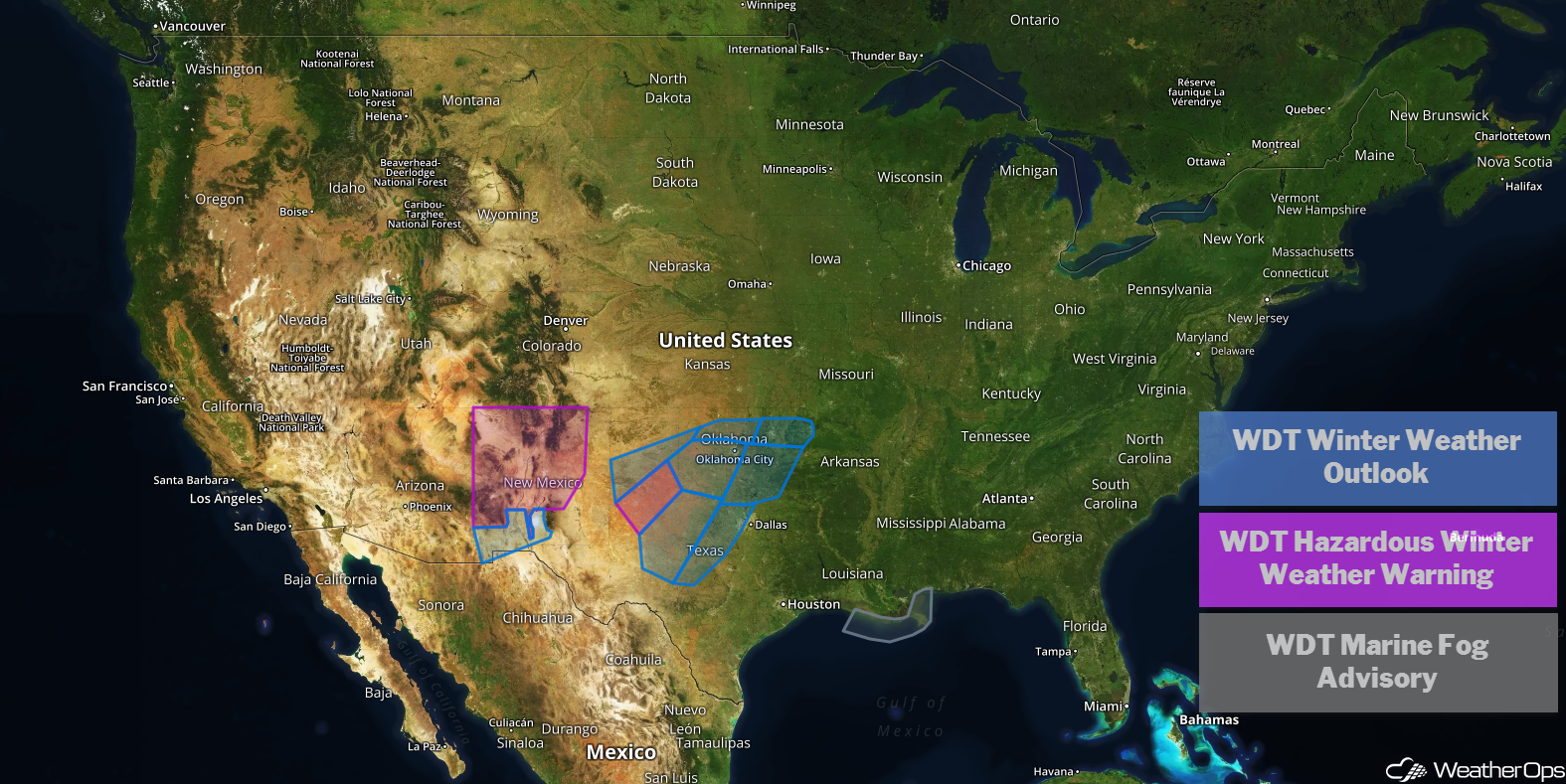 Continued Snow for the Southwest on Wednesday
The area of low pressure that has impacted the region over the past few days should move eastward into Texas and Oklahoma later today. However, some light to moderate snowfall may persist across southeastern Arizona and southern and central New Mexico. Accumulations will range from a trace to 3 inches. Snow should come to an end by this evening. 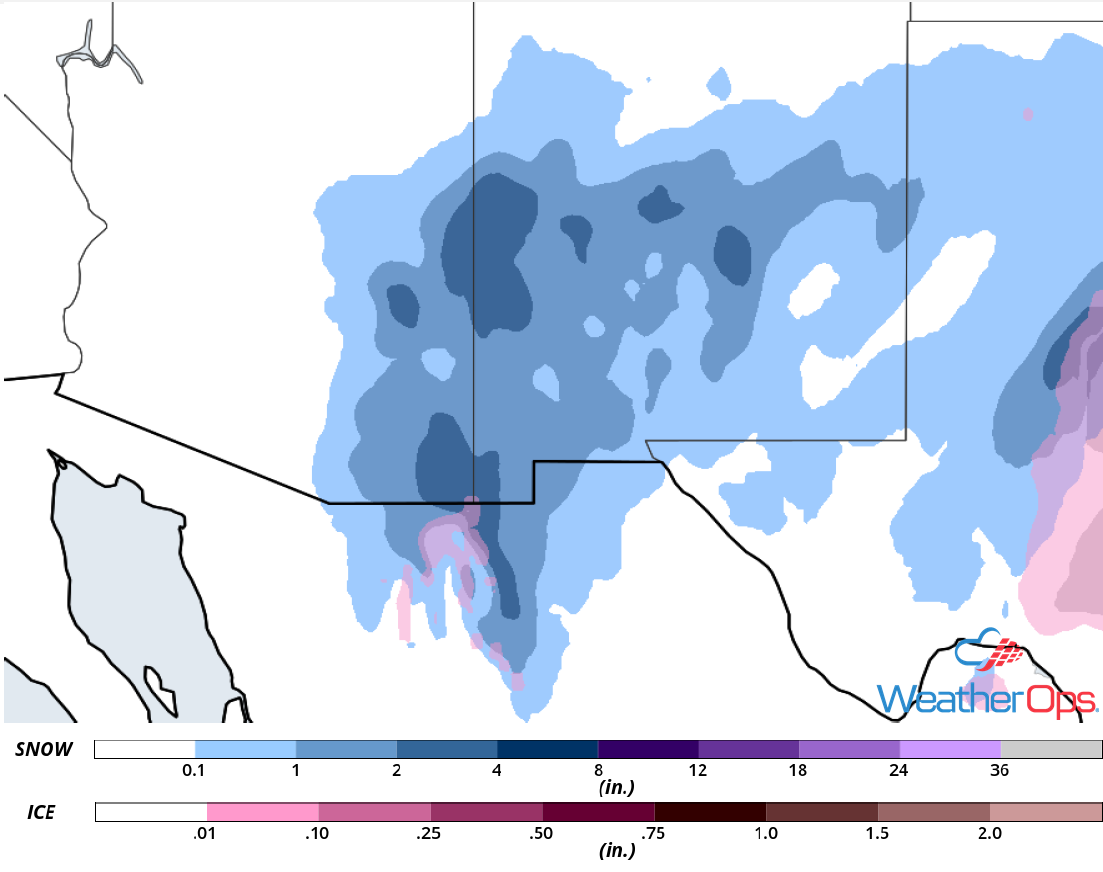 Freezing Rain and Snow through Friday across the Southern Plains
A winter storm is beginning to impact the region as an area of low pressure over the Gulf of Mexico brings moisture northward, A wintry mix is already occurring across central Texas, which is expected to spread north and west through the day. By the evening into the early morning on Thursday, the area of low pressure that is currently producing snow over the Southwest will interact with the system to the south. This will bring colder air into the region, allowing precipitation to transition to primarily snow across west-central Texas and southwest Oklahoma. Further east, a mixture of rain and freezing rain is expected. Snow accumulation will range 2-4 inches. Freezing rain accumulation up to 0.25 inch is expected. 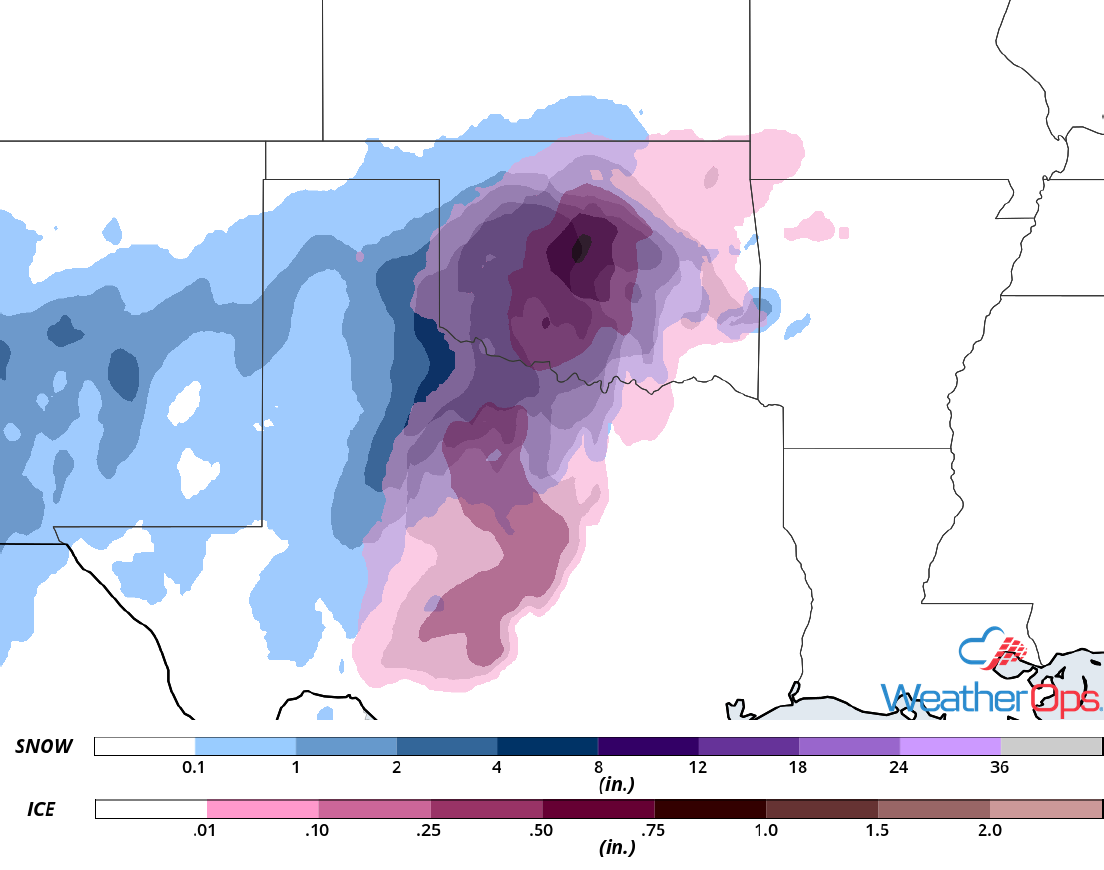 Snow and Ice Accumulation through Friday

Excessive Rainfall from the Lower Mississippi Valley into the Lower Tennessee Valley through Thursday
As a disturbance over the Gulf of Mexico slowly moves northward today, it will be blocked by an area of high pressure over the central US, bringing it slowly eastward. Ample moisture, combined with the slow eastward progression, will result in training showers and thunderstorms. This will produce widespread rainfall amounts of 2-3 inches today. As the low continues to move eastward, it will begin to interact with another low developing across Oklahoma and Texas. This will further slow the system for most of the day Thursday, bringing an additional 1-3 inches of rain. Two day rainfall totals of 3-6 inches with locally higher amounts in excess of 8 inches are expected, allowing for a risk of localized flooding and flash flooding. By Thursday evening, rain will end as the low moves eastward. 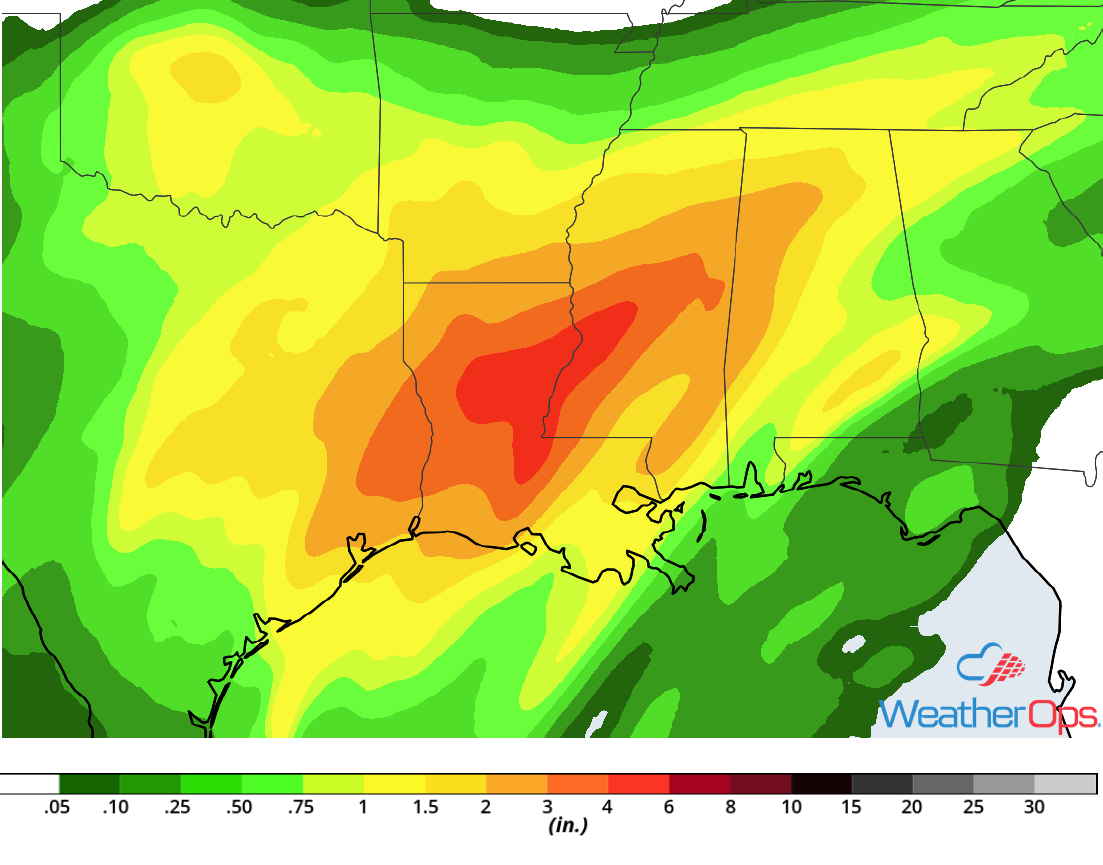 Dense Fog through Wednesday Afternoon for the Louisiana and Mississippi Coasts
Dense fog is ongoing along portions of the north-central Gulf Coast this morning as a front remains stalled over the western Gulf of Mexico. Widespread dense fog with areas of near zero visibility will be likely through the afternoon. Fog will begin to clear this evening as an area of low pressure begins to move into the Southern Plains and Gulf Coast.

A Look Ahead
Rain will continue across the Mid Atlantic through Saturday as an area of low pressure moves across the region. Snow is forecast across the Central and Southern Rockies on Sunday. By Monday, an upper level system may bring snow to the Pacific Northwest and Sierra Nevadas. Rain and snow may develop across portions of the Northeast on Tuesday.