Thunderstorms are expected to develop across portions of southeastern Texas and southwestern Louisiana on Wednesday as instability builds. Wintry precipitation will continue from areas of New York eastward into Maine through Wednesday afternoon as an area of low pressure moves eastward. Freezing rain and snow is expected to continue for portions of the Pacific Northwest and Northern Rockies as a large system moves in from the Pacific. Snow is expected across portions of Arizona beginning Thursday and continuing into the weekend as an area of low pressure moves across the region. 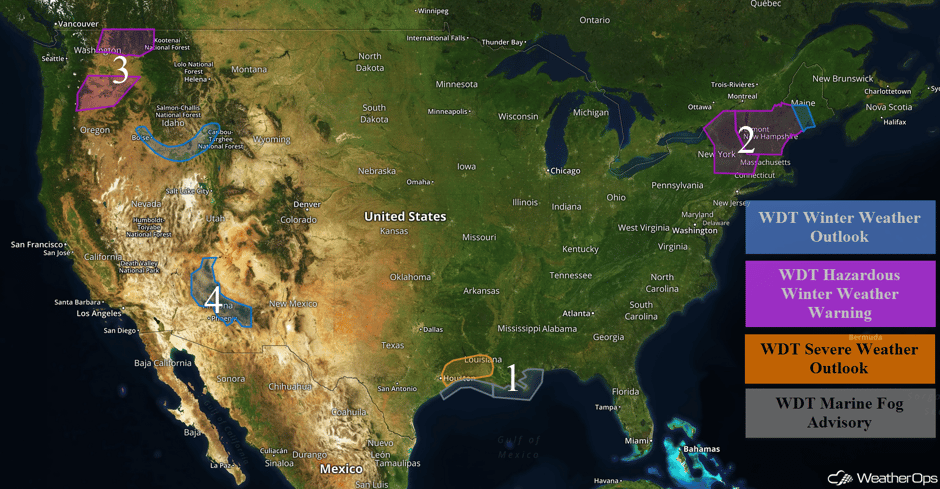 Region 1
Early morning rain and thunderstorm activity across portions of central and eastern Texas into Louisiana will continue to track northeastward across the lower Mississippi River Valley this morning. Although most of this activity is forecast to remain below severe limits in nature, instability will build into the afternoon. With southeasterly winds bringing warm moist air into the region, as well as strong instability, strong to severe thunderstorms are expected to develop. The primary hazard with any thunderstorms that develop will be damaging winds, however, some small hail will be possible as well. Along the Texas and Louisiana coasts, dense fog will limit visibilities to less than a mile at times. 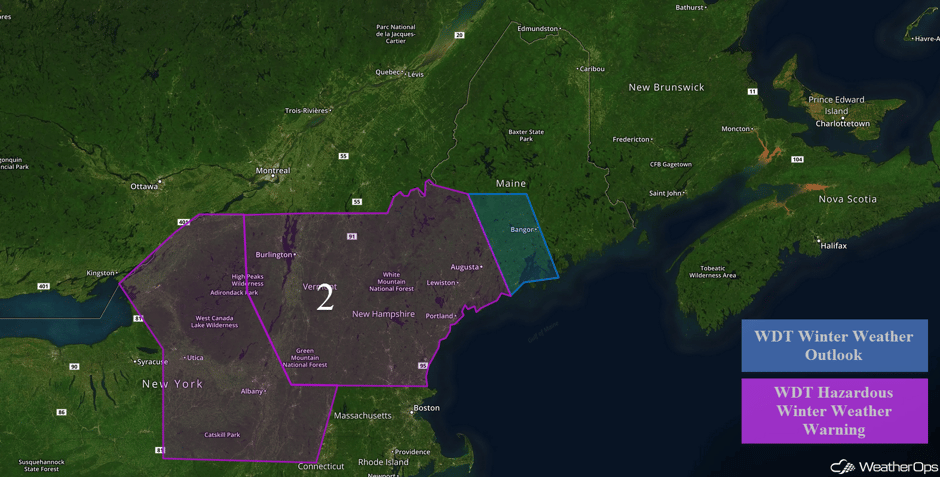 Region 4
A prolonged period of winter weather is expected for the higher elevations of central and northern Arizona this week. Areas of light snow will spread east on Thursday before increasing in intensity Thursday night. Snow will diminish Friday before a second storm system brings heavy snow to the region Friday evening through early Saturday. Heavy snow is most likely to occur above 6,000 feet with these systems, but will drop as low as 4,500 feet Thursday evening and again by early Saturday, allowing for some accumulation. Snow accumulations of 4-8 inches are forecast between 4,500 and 6,000 feet, 8-16 inches between 6,000 and 7,000 feet, and 12-14 inches above 7,000 feet.

Excessive Rainfall Possible for Arklatex Region on Wednesday
Low pressure strengthening over Texas is forecast to begin moving eastward today, dragging a cold front along with it that should remain stalled out along the Texas coastline. This will allow for showers and thunderstorms throughout the day, with periods of moderate to heavy rainfall creating flood potential. Accumulations of 1-2 inches are likely, with localized amounts exceeding 3 inches possible where the strongest storms develop or training storms occur.

Excessive Rainfall Possible for Pacific Northwest and California on Wednesday
Heavy Rainfall will continue across the Western Coastline, with the heaviest rainfall spreading into Oregon and Northern California. The heaviest accumulations will range 2-4 inches with higher totals in the upper elevations. 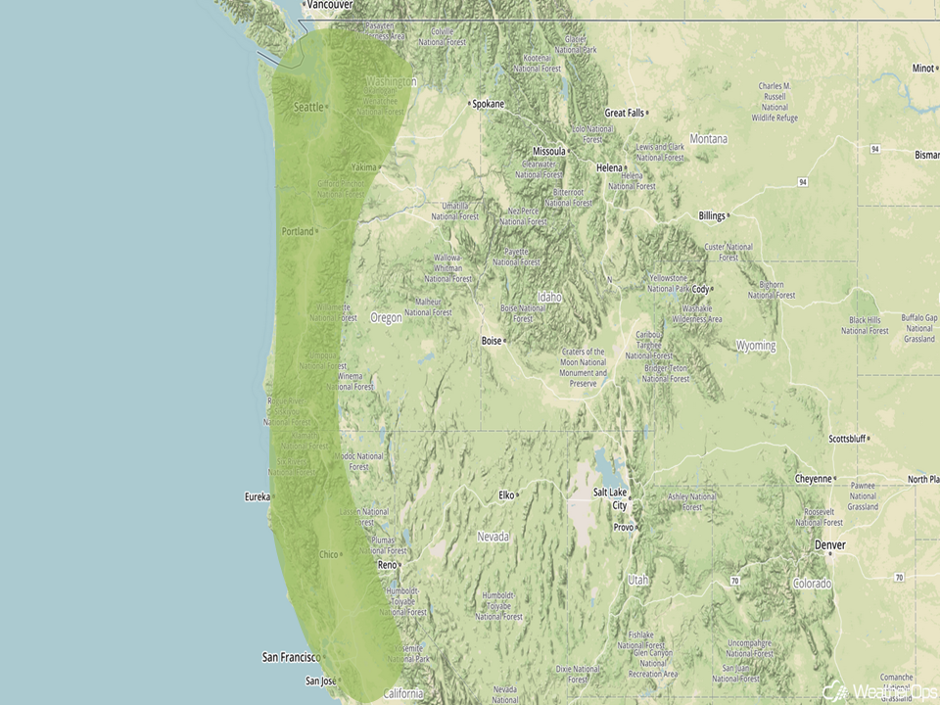 Significant Snowfall Possible for the Sierra Nevadas on Wednesday
A series of troughs and cold fronts are expected to bring plentiful snowfall to the Sierra Nevadas beginning Wednesday and continuing into the weekend. Snowfall totals of 6-12 inches are forecast with locally higher amounts in excess of 18 inches on the highest peaks.

Strong to Severe Thunderstorms Possible for Gulf Coast on Thursday
A low pressure system and cold front will push eastward along the Gulf Coast on Thursday, with limited but some noteworthy support for severe weather across the region. Cloud cover will be a strong inhibitor of any significant development, but any clearing and heating in combination with favorable upper level winds should cause some supercells or linear segments to form, with damaging winds and an isolated tornado or two as the main risks. This risk will be most prominent during the afternoon and evening hours, with the threat diminishing overnight. The strongest thunderstorms, as well as areas of training precipitation, could also cause localized flooding across the region. 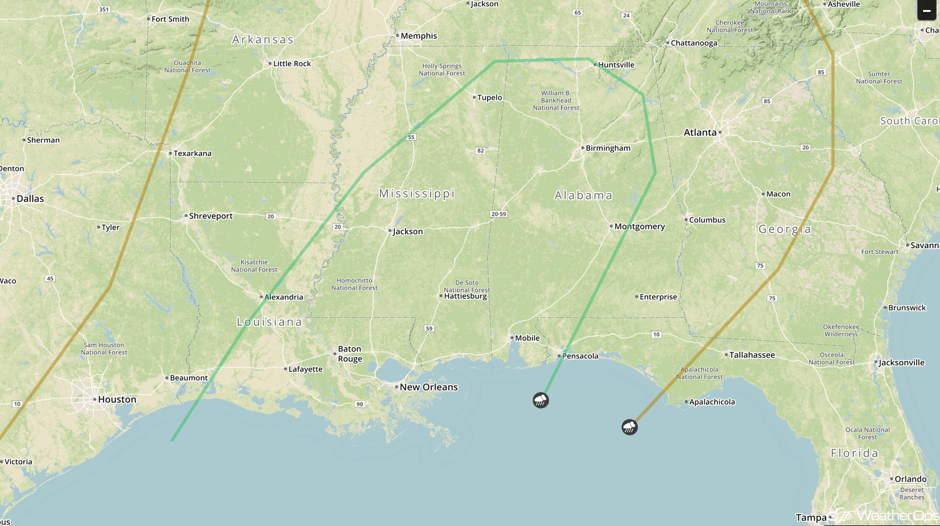 Strong to Severe Thunderstorms Possible for Gulf Coast on Friday
With the cold front moving out of the region, moisture should begin to return across the Gulf Coastline states quickly on Friday, but no real area of forcing for thunderstorms is expected. Rather, during the evening and into the overnight hours, clusters of thunderstorms are likely to form in response to this deepening moisture. Overnight upper level winds will then become supportive of these storms, where a very isolated severe risk may be possible with hail and wind possible, along with an incredibly isolated tornado across the region. 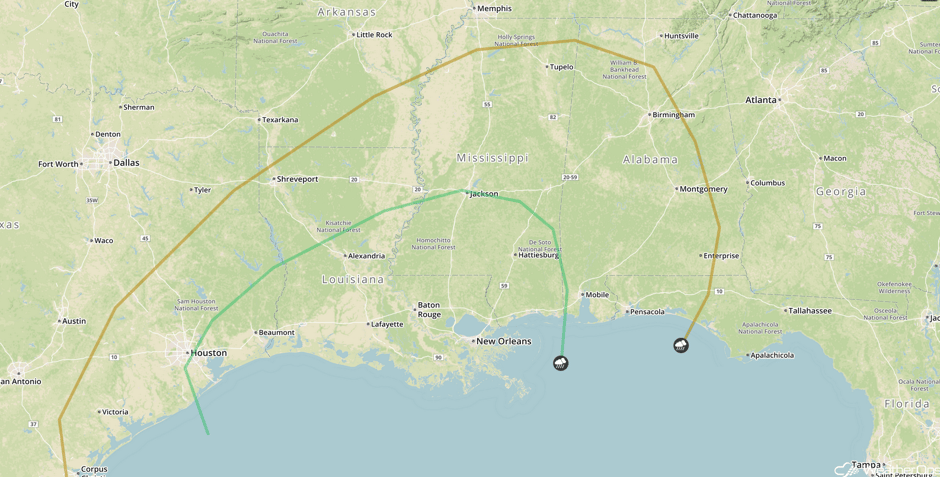 A Look Ahead
Severe thunderstorms are expected across the Southeast Saturday into Sunday ahead of a cold front. Early next week, an area of low pressure moving into the Northeast will bring heavy rainfall and snowfall to the New England region. On Tuesday, an area of low pressure will bring the potential for heavy snowfall to portions of the Plains.