A cold front will be the focus for the development of thunderstorms along the Gulf Coast on Wednesday. These storms will have the potential to produce excessive rainfall from the Gulf Coast into the Tennessee Valley. Snow will continue across the Upper Midwest as an area of low pressure moves eastward. Wintry precipitation will continue for the Mid Atlantic and the Northeast.  Snow is forecast across the Four Corners region through Friday. 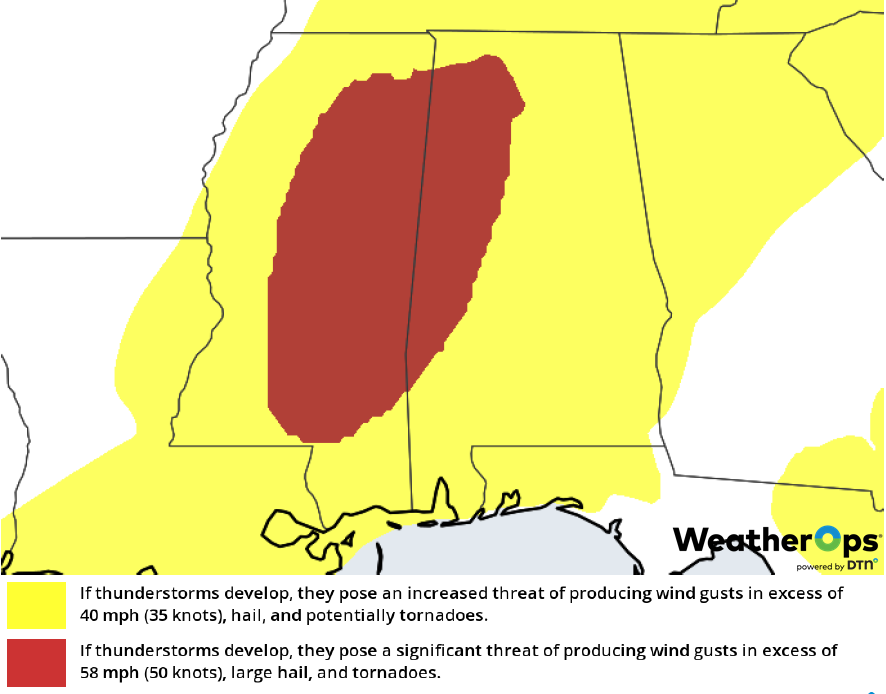 Excessive Rainfall Wednesday from the Gulf Coast to the Tennessee Valley
In addition to the thunderstorm potential, there will be a risk for excessive rainfall. Rainfall amounts will range 1-3 inches, leading to a risk for flash flooding. 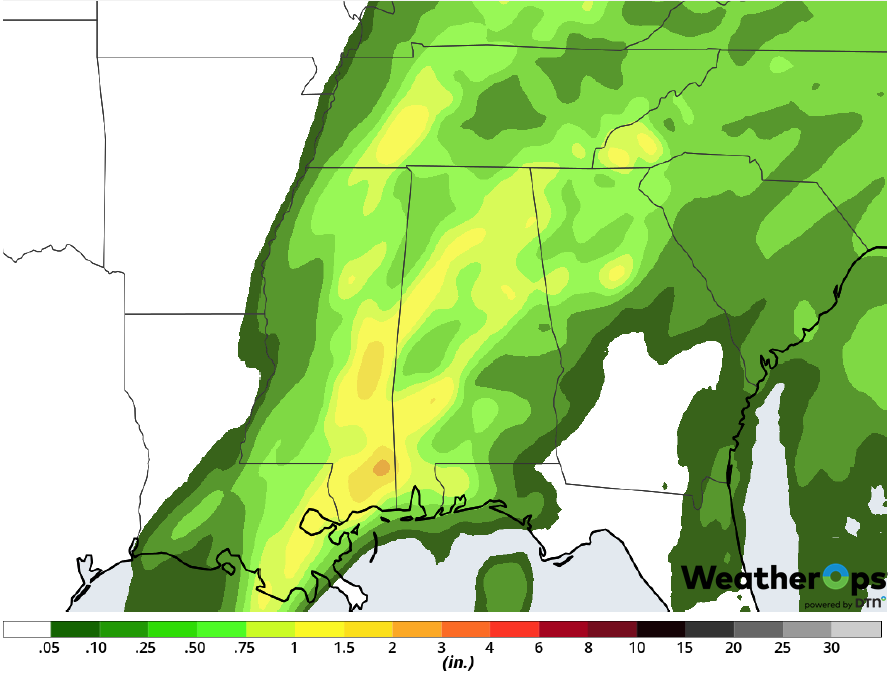 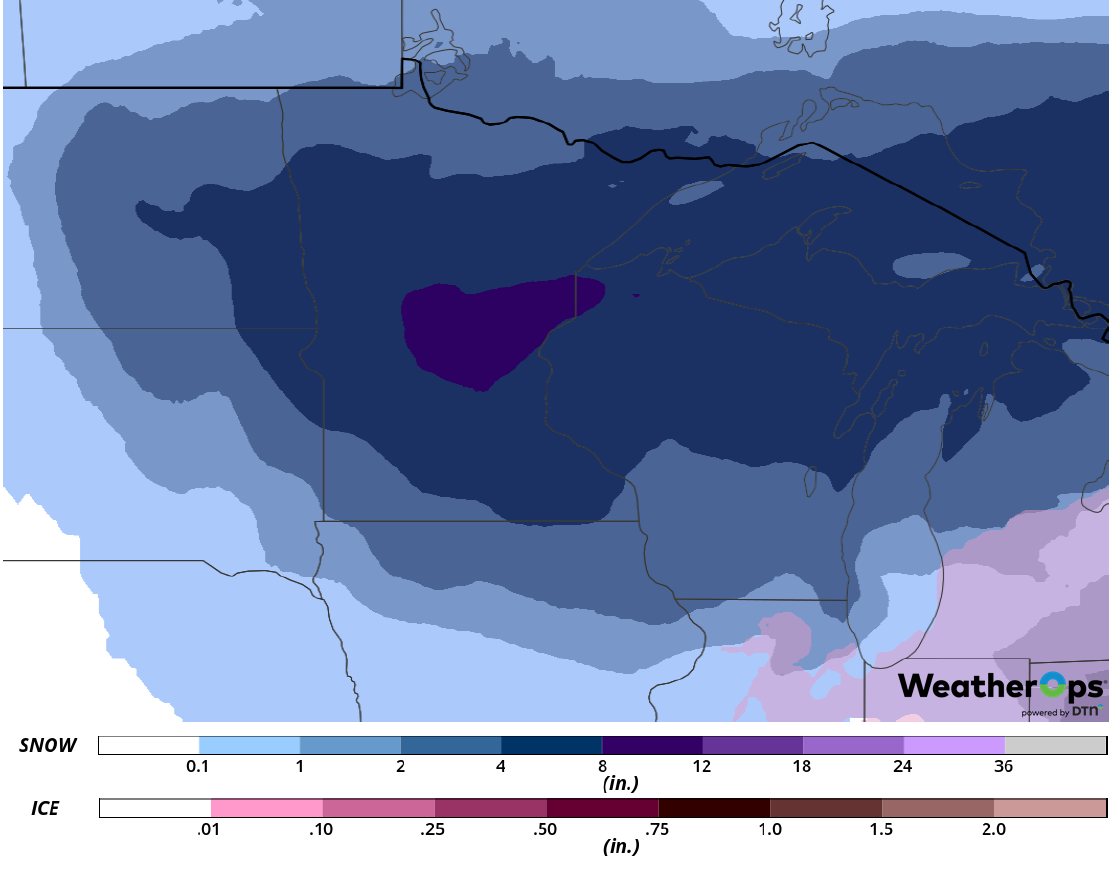 Wintry Precipitation Wednesday from the Mid Atlantic into the Northeast
A large winter storm will continue to impact the Mid Atlantic and Northeast on Wednesday. A relatively short duration of moderate to heavy snow will move through Pennsylvania this morning as a warm front lifts northward. To the south, sleet and freezing rain are expected from the northern Appalachians into lower New England throughout the day and evening. Snow accumulation will range 3-7 inches with locally higher amounts in excess of 8 inches. Sleet accumulations will range 0.20-2.00 inches and freezing rain accumulations of 0.10-0.20 inch with locally higher amounts in excess of 0.30 inch are expected. 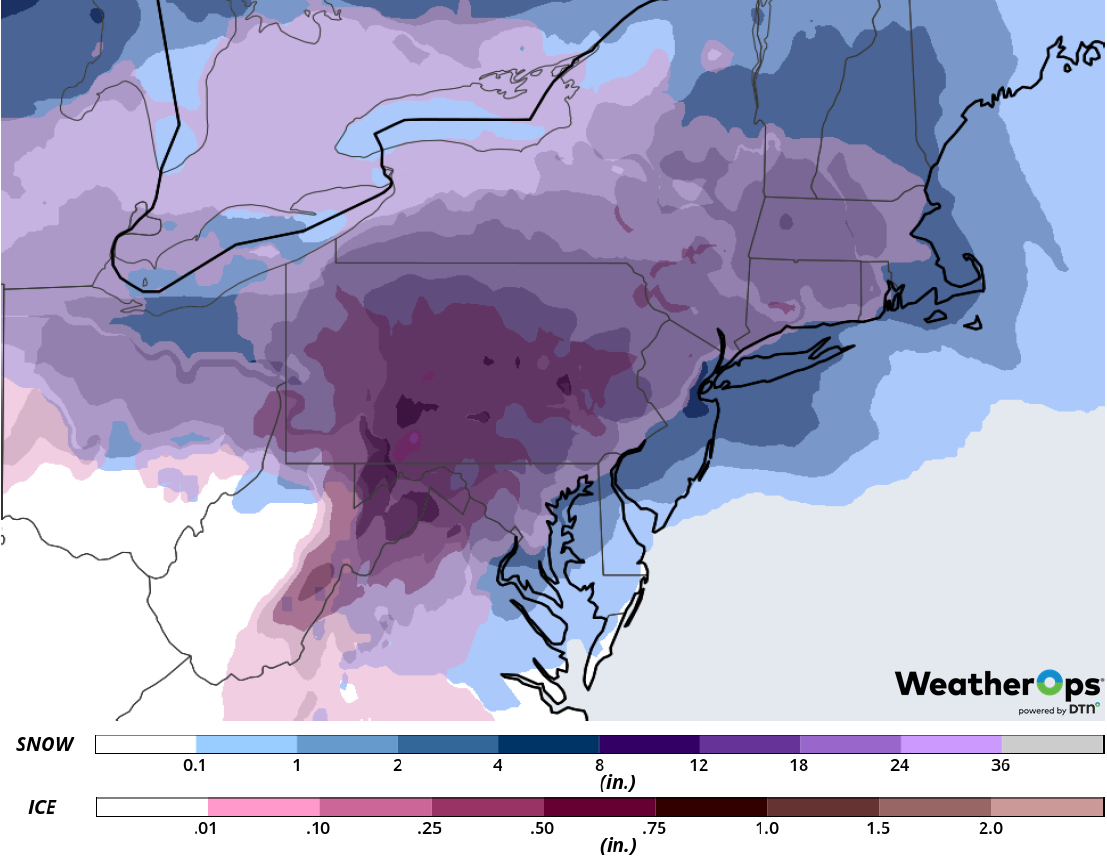 Potential for Snow across the Four Corners through Friday
Light to moderate snow will begin by the evening hours as a large, slow moving area of low pressure develops across the Intermountain West. Very cold temperatures will allow widespread snowfall. On Thursday, the heaviest snow is expected across southern Utah into northern Arizona, where accumulations over 8 inches are expected in the lower elevations. In the higher elevations, snowfall accumulations in excess of two feet are expected. Heavy snow will shift into New Mexico and southern Colorado on Friday, leading to dangerous to impossible travel conditions. 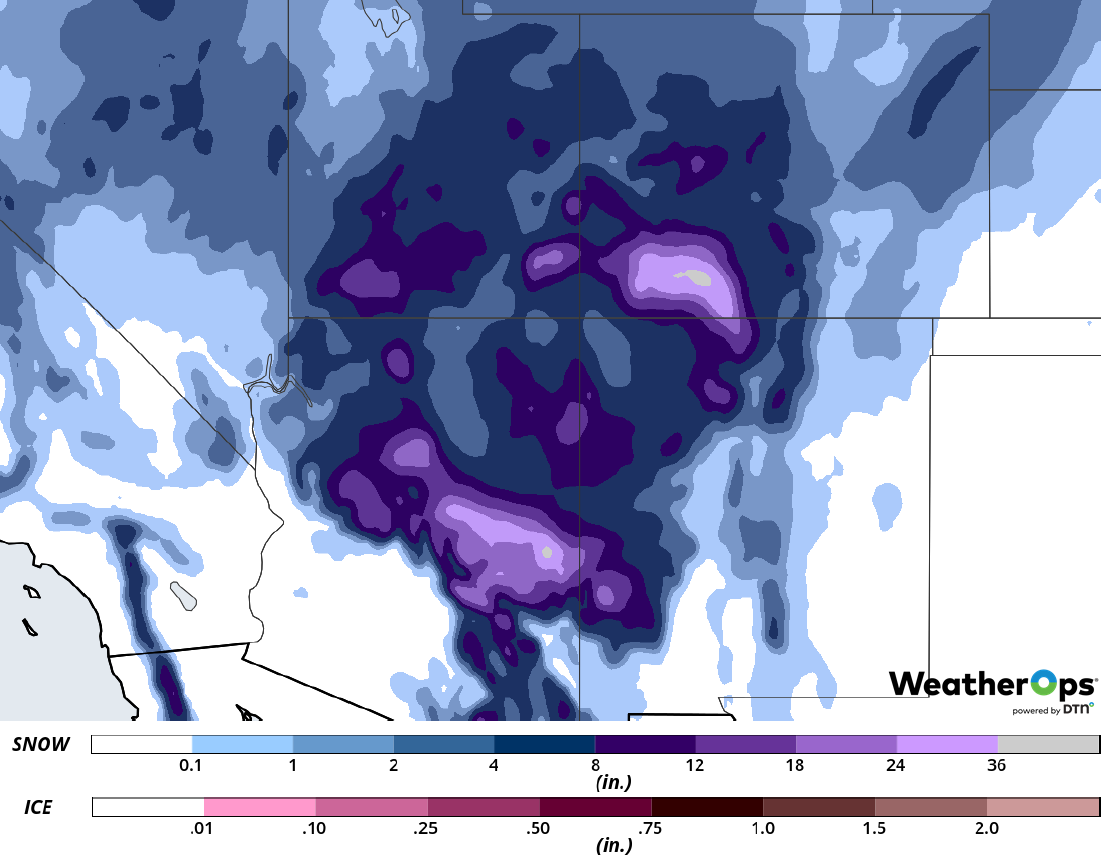 Excessive Rainfall Thursday and Friday across the Lower Mississippi Valley
The threat for excessive rainfall will return to the Lower Mississippi Valley Thursday and Friday as a front stalls along the Gulf Coast and produces showers and thunderstorms. Rainfall rates will likely be the highest during the afternoon and evening when conditions become more favorable for thunderstorms. Two day rainfall totals of 2-4 inches with locally higher amounts in excess of 5 inches are expected. With the recent heavy rain, there will be a potential for flash flooding within the heaviest storms. 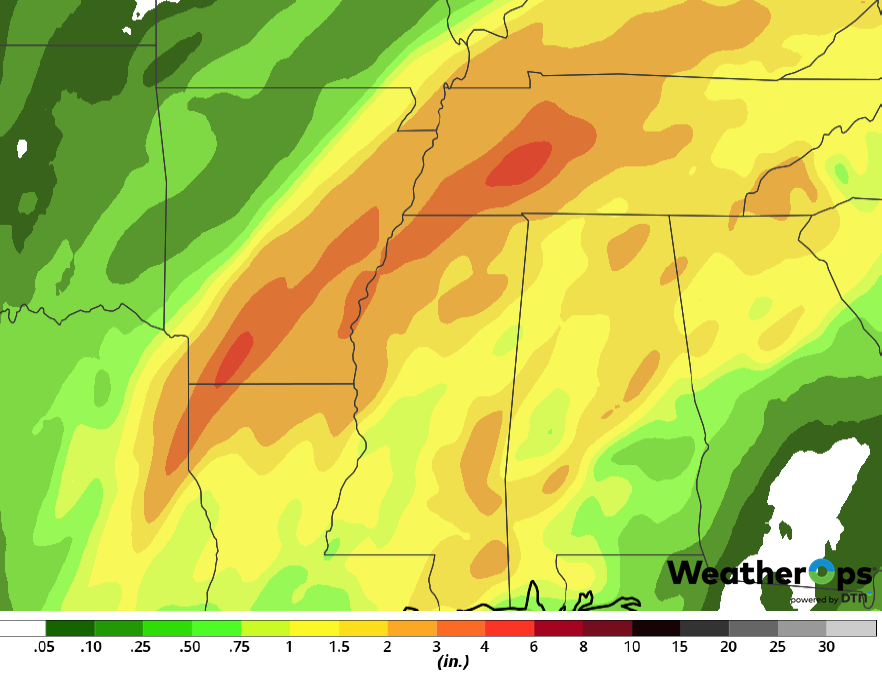 Snow across the Upper Northeast Thursday
An area of low pressure will track through the region on Thursday, producing a large area of moderate snowfall. Snowfall totals will range 4-8 inches with locally higher amounts in excess of 10 inches. 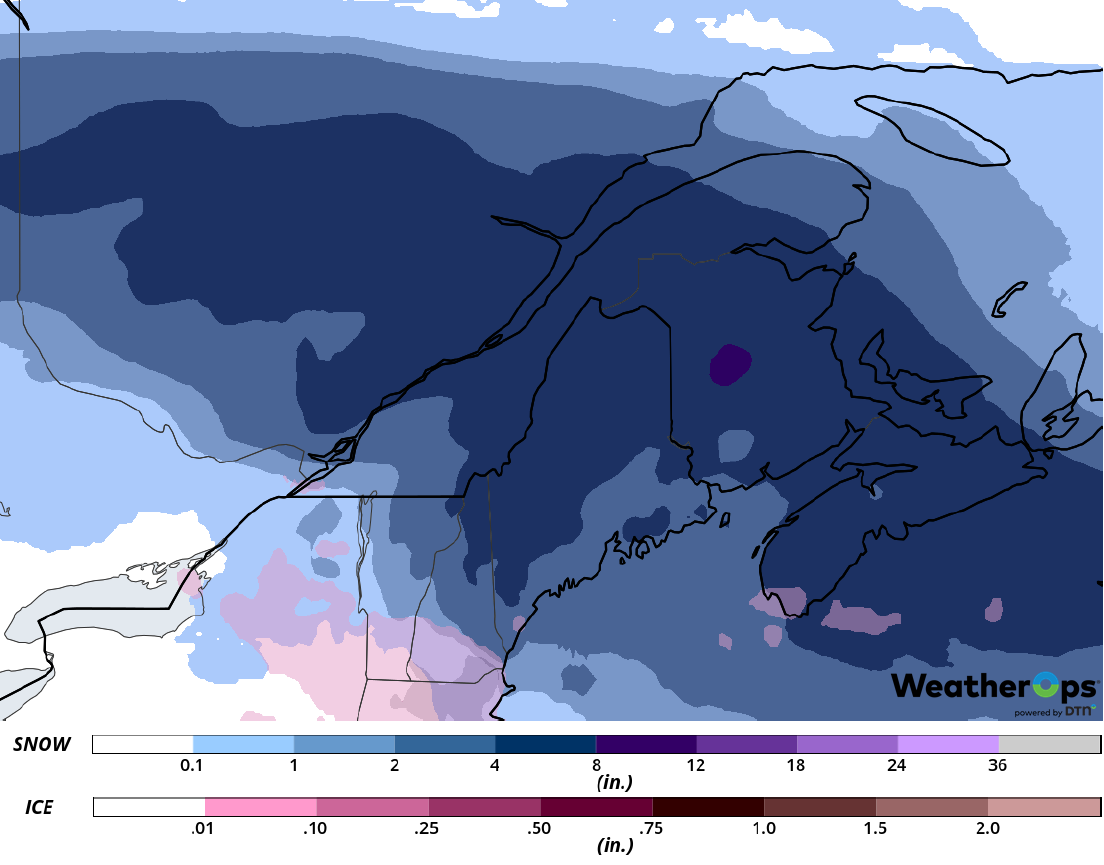 Thunderstorms Friday from the Southern Plains into the Lower Mississippi Valley
Thunderstorms are forecast from eastern Texas into the Arklatex and Lower Mississippi Valley on Friday as a strong area of low pressure develops over the Plains. Warm, moist air will move northward during the day, allowing for the development of scattered thunderstorms during the afternoon. Isolated large hail and damaging winds will be the primary hazards. A cold front will move in from the west during the evening and overnight hours, allowing for the development of a line of thunderstorms. Damaging winds will be the primary hazard with this activity. 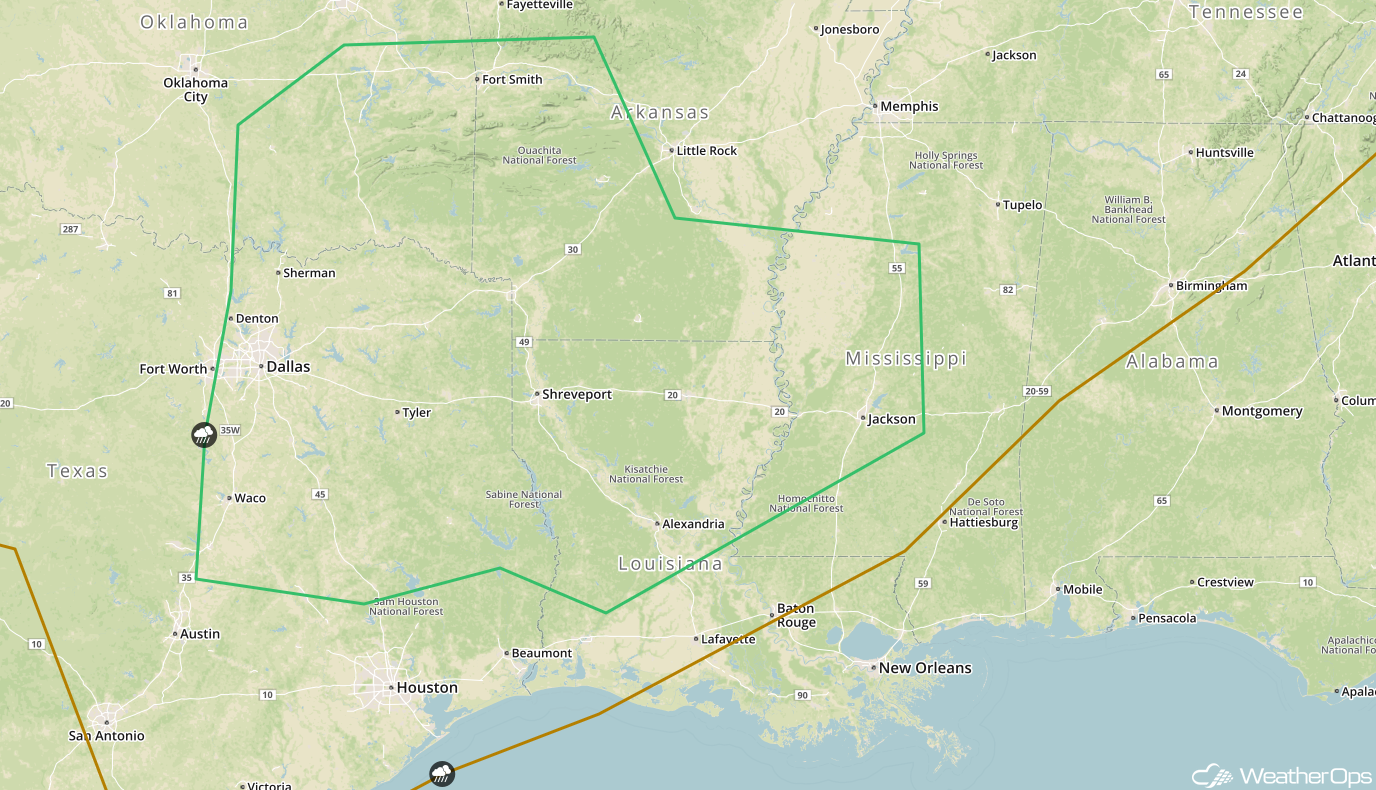