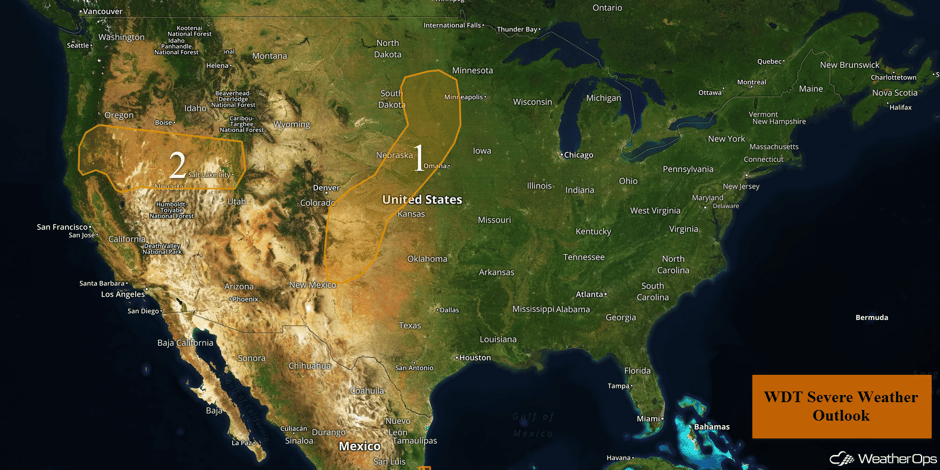 Thunderstorms from the Northern Plains to the Southern High Plains on Wednesday
An upper level disturbance will move out of the Northern Rockies and into the Northern Plains today. An associated surface low will move across the Dakotas into Minnesota. Southerly flow ahead of the low will bring warm, moist air northward. The system's cold front should allow for the development of isolated to widely scattered strong to severe thunderstorms as it moves into the region. Storms should develop in the afternoon and continue into the evening. Large hail and damaging winds will be the primary hazards with these storms. 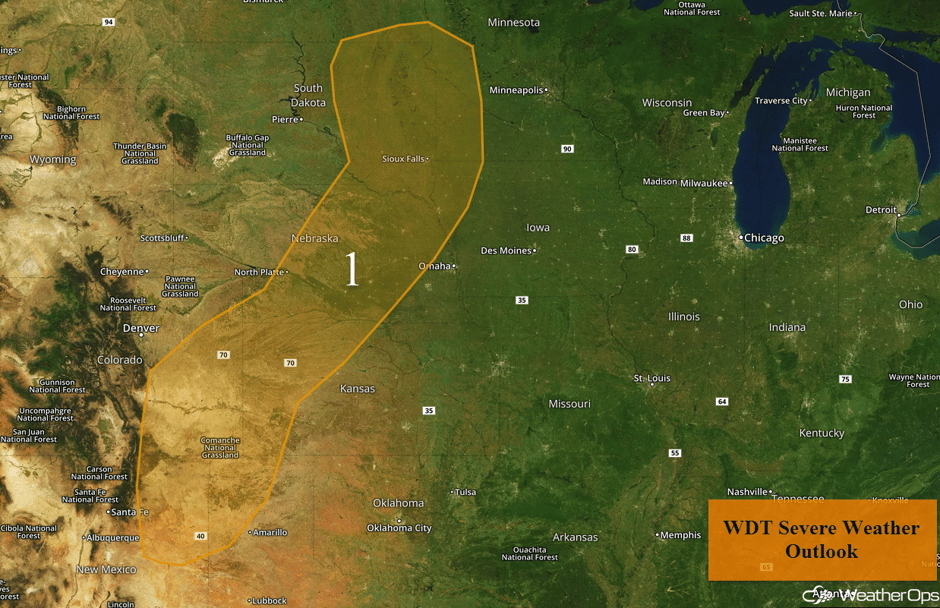 Risk for Thunderstorms Wednesday across the Great Basin
Sufficient moisture and daytime heating will destabilize the atmosphere and a disturbance in place across the region will be the focus for scattered thunderstorm development by mid-afternoon. With the instability in place, thunderstorms will intensify rapidly. Gusty winds and hail will be the primary hazards with these storms, but an isolated tornado cannot be ruled out. The severe threat should diminish after sunset with the loss of daytime heating. 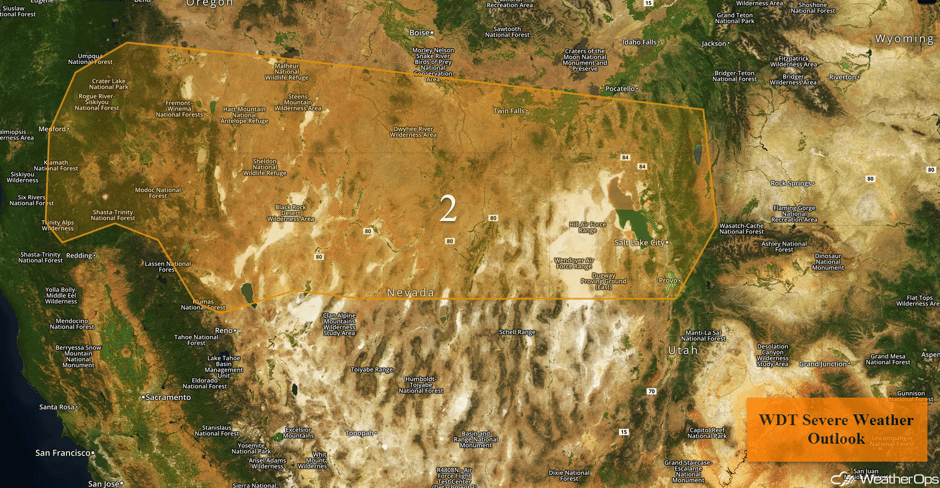 Excessive Rainfall Wednesday for the Deep South and Southeast
A stalled front across the Deep South will promote the development of multiple rounds of showers and thunderstorms. Some activity will already be ongoing during the morning, but some additional development is expected this afternoon along the front. Rainfall amounts of 1-2 inches, with locally higher amounts in excess of 3 inches, is forecast. Given recent heavy rain, localized flooding is expected.

Potential for Thunderstorms across the Central Plains and Front Range on Thursday
The weak area of low pressure that is bringing severe weather to the Northern Plains and Southern High Plains today will continue to track eastward on Thursday. The cold front will stretch southward across the Central Plains and continue moving southward. As this cold front continues to move southward, daytime heating, ample moisture, and strong wind shear will result in an increase in shower and thunderstorm activity. Some of these storms may be strong to severe. Scattered thunderstorms will develop during the afternoon and form line segments  overnight, tracking southeastward toward the Kansas/Oklahoma border. Damaging winds will be the primary hazard, but hail and isolated tornadoes cannot be ruled out. In addition, there will be a risk for heavy to excessive rainfall with these complexes. Rainfall amounts of 1-2 inches with locally higher amounts in excess of 3 inches are forecast across Kansas and Oklahoma during the overnight hours. This will lead to a risk for flooding and runoff across the region. 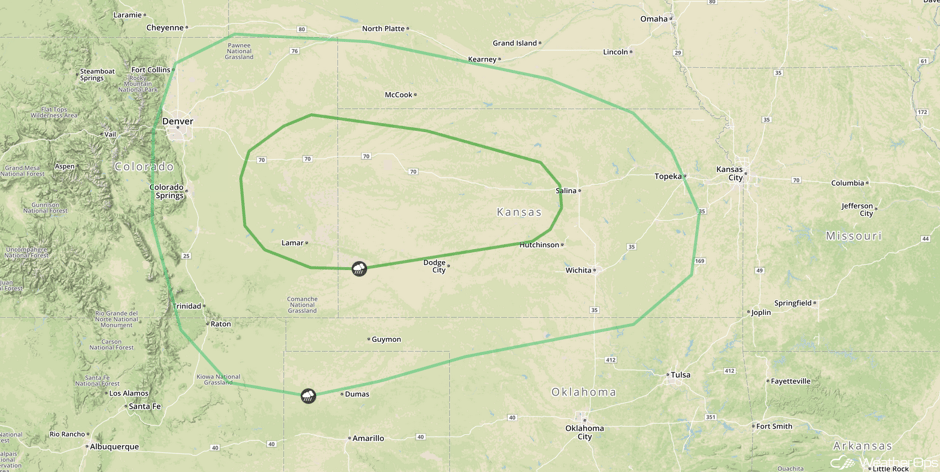 Risk for Excessive Rainfall Friday for the Southern Plains
A front across Kansas will move little throughout the day on Friday. Multiple upper level disturbances along this boundary will provide lift. With ample moisture in place, multiple rounds of rain and slow moving thunderstorms are forecast. Thunderstorms from the evening will track southeastward across Oklahoma then dissipate. More thunderstorms are forecast in southern Kansas and Northern Oklahoma during the overnight hours before tracking southeastward. Rainfall amounts of 1-2 inches with locally higher amounts in excess of 3 inches are expected. With heavy rainfall from previous days, there is a risk for flooding and runoff. 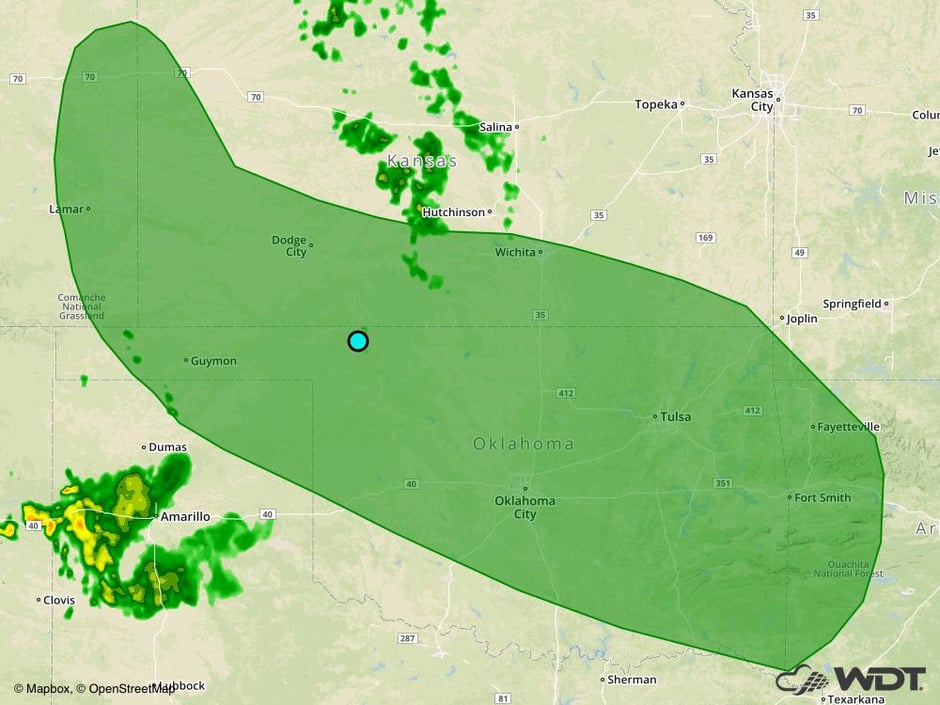 Tropical Update
Tropical Storm Franklin (green oval) is continuing to move westward at 13 mph and this general motion is expected over the next day or so. On its current track, the center of Franklin is expected to approach the coast of eastern Mexico today then cross into Veracruz tonight or Thursday. Maximum sustained winds are near 70 mph with higher gusts. Franklin is expected to become a hurricane tonight or early Thursday and should weaken rapidly after making landfall.

Activity has increased in association with an area of low pressure (red oval) approximately 400 miles east of the Leeward Islands. Significant development is not expected over the next few days, but conditions will become more favorable later this week and into the weekend while it moves west-northwestward to northwestward over the western Atlantic. 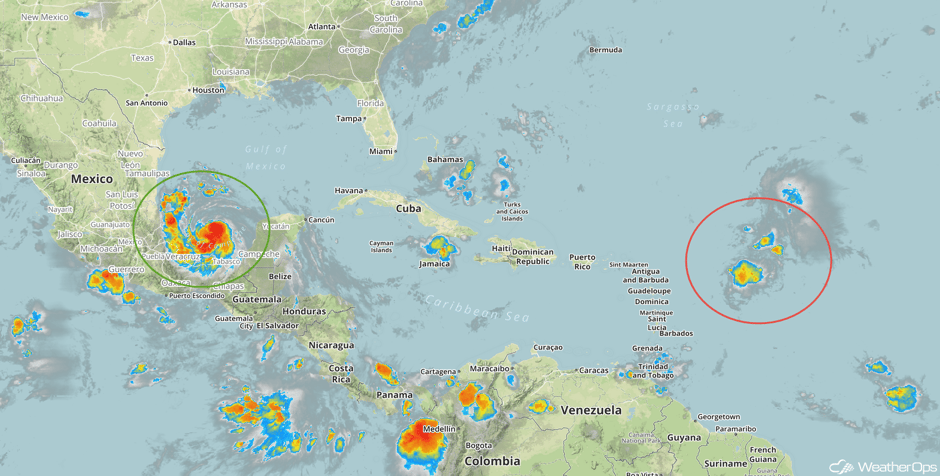 A Look Ahead
A stalled frontal boundary will bring a risk for excessive rainfall for portions of the Southern Plains this weekend into early next week. Multiple rounds of showers and thunderstorms are forecast to impact the region. Four day rainfall totals of 5-8 inches with locally higher amounts in excess of 10 inches will be possible. Given the multiple rounds of heavy rainfall, flooding will be possible across the region.