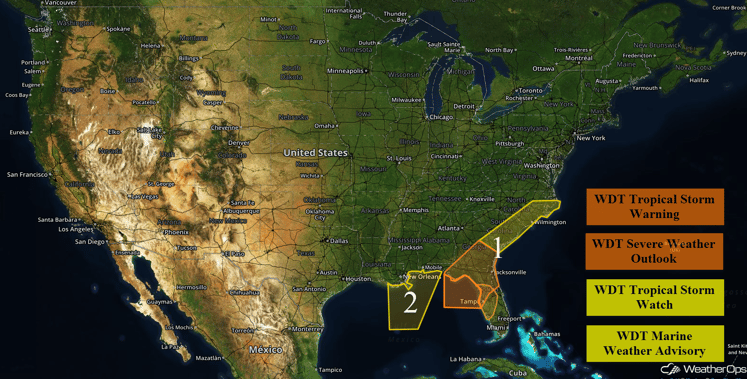 Tropical Depression Nine is forecast to move through the eastern Gulf of Mexico over the next couple of days. The system is expected to become a tropical storm in the next 6-12 hours and is forecast to intensify into a strong tropical storm as it moves northeastward and makes landfall in northwestern Florida early Friday. Tropical storm force conditions are expected to spread into the warning area from the southwest Thursday morning and persist through early Friday morning as the storm moves inland. However, winds are expected to be slightly lower across southern portions of the area near Tampa, but Tropical Storm force gusts are still expected. Gale to storm force winds are expected within that threat time with seas ranging from 8-20 feet. Seas in excess of 20 feet are possible near the center of the storm as well.

Further to the northeast, Tropical Depression Nine will move off the Southeast coast late Friday as a moderate to strong tropical storm. Tropical storm force winds and/or gusts along with excessive rainfall will be possible across the Carolinas.  Additionally, thunderstorm squalls will be capable of producing strong winds and tornadoes. The storm should move further out to sea by midday Saturday and allow for improving conditions across the region.

Update 2:52pm EDT: Heavy rainfall totals around 4 inches (orange shades) have been estimated by radar around the Tampa area. 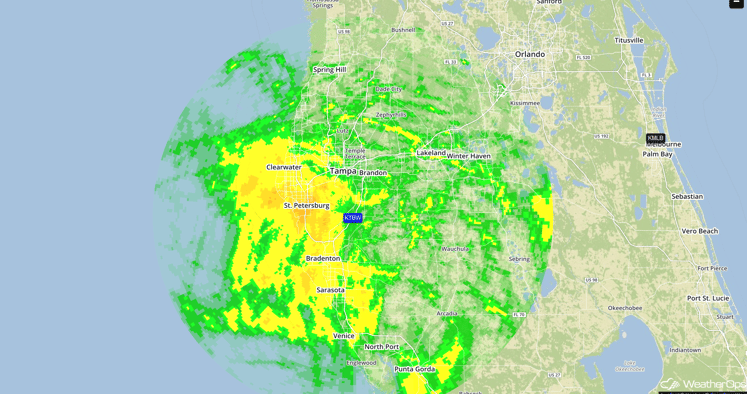 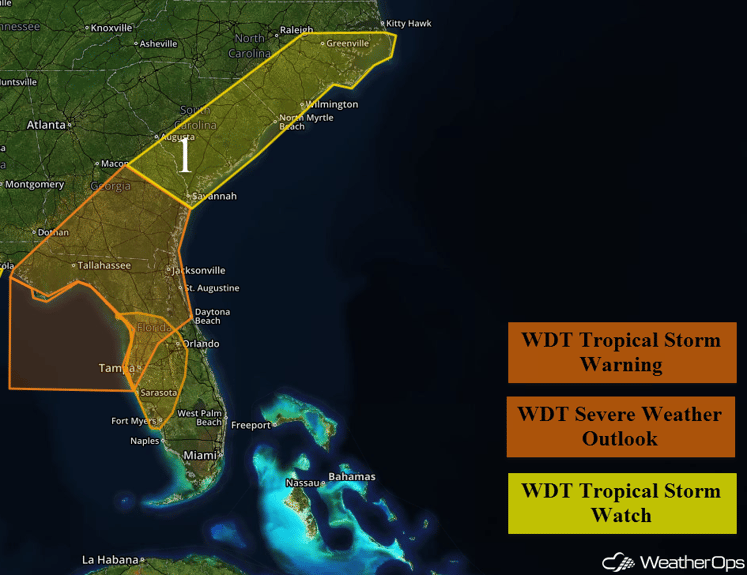 As a result of Tropical Depression Nine moving to the east of Region 2, elevated seas will be possible across the region beginning Wednesday morning through early Friday morning. Easterly to southeasterly swells of 7-11 feet will be possible. 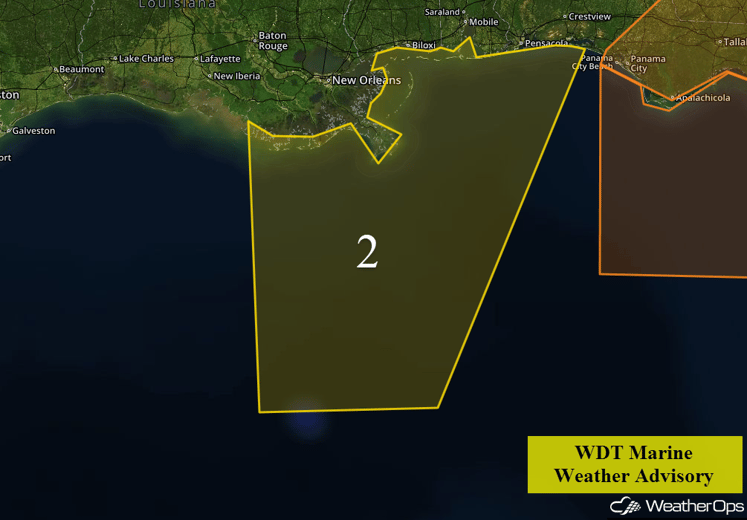 Excessive Rainfall Possible across the Central and Southern Plains on Wednesday

A surge of deep moisture will  spread northeastward across the southern High Plains and into the Central Plains today. As a cold front moves southward into the region, showers and thunderstorms can be expected throughout the day. There will be a potential for excessive rainfall, with 1-2 inches and locally higher amounts in excess of 3 inches possible. 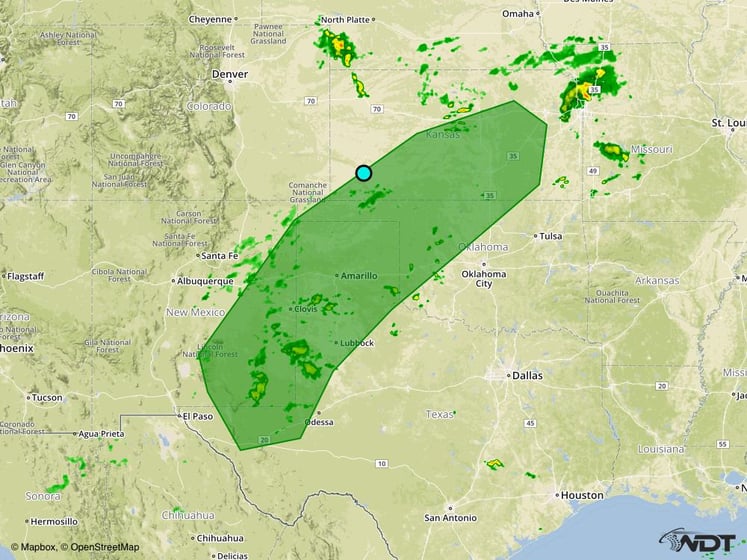 Strong to Severe Thunderstorms Possible Thursday across the Southeast

As Tropical Depression Nine makes landfall across northwest Florida or the Florida Panhandle on Thursday, tropical storm conditions are expected across much of the region. Based on the current forecast track, there will be a potential for strong to severe thunderstorms across much of northern and central Florida during the morning and afternoon hours, then spreading eastward across southern Georgia and into southern South Carolina during the evening and overnight hours. The primary hazards will be gusty winds and tornadoes. In addition to the severe threat, widespread heavy rainfall can also be expected. Rainfall amounts of 2-4 inches with locally higher amounts in excess of 5 inches are possible, leading to an increased risk of flooding across the region.

Strong to Severe Thunderstorms Possible across the Southeast on Friday

Tropical Depression Nine is forecast to move along or just offshore the Southeast US coast on Friday, likely as a moderate to strong tropical storm. Based on the latest forecast track, it will bring tropical storm conditions along the coast from southeast Georgia and northeastward across the Carolinas. Strong to severe thunderstorms containing gusty winds and tornadoes will be possible. Additionally, excessive rainfall will be a concern with general amounts of 2-4 inches and locally higher amounts in excess of 6 inches will be possible for many locations. 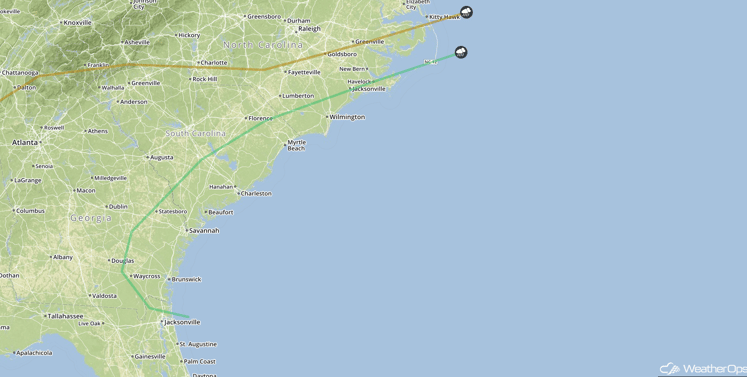 Hurricane Gaston (orange oval) continues to move toward the east-northeast near 15 mph. This motion is expected to continue over the next few days, approaching the Azores on Friday. Some gradual weakening is forecast during the next 48 hours.

Tropical Depression Eight (blue oval) is moving to the northeast at 15 mph. This general motion is expected to continue with an increase in forward speed. Maximum sustained winds are near 35 mph with higher gusts. Further strengthening is anticipated and could become a tropical depression later today.

A broad area of low pressure (red oval) is located near the Cabo Verde Islands. No significant development is expected over the next few days, but some development will be possible over the weekend.