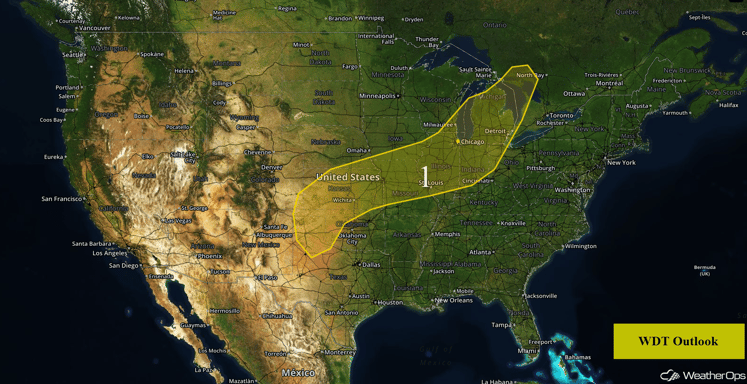 An upper level low over southern Canada extends southward over the western US, and a couple of smaller waves moving around it may generate a few strong to severe thunderstorms from far west Texas northeastward through portions of Kansas and Oklahoma, northern Missouri and into Michigan. Showers and thunderstorms have developed across the Great Lakes region this morning. These will move east and may re-intensify this afternoon in the threat region from Michigan southwestward. The primary threat with these storms would be gusty winds. Further to the southwest, the other wave will move out of the central Rockies. With instability in place, a few strong to severe thunderstorms may develop this afternoon in Kansas and Oklahoma. This activity will move to the east and northeast through the afternoon and evening, and into Missouri during the overnight hours. Large hail and damaging winds will be the primary hazards with these storms. 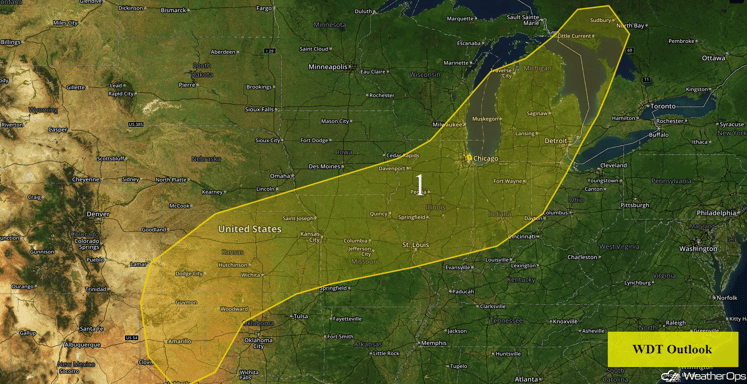 Strong to severe thunderstorms are expected to develop ahead of a cold front across the Midwest and along a stationary front in the Southern Plains. In the Southern Plains, the stationary boundary will lead to further chances of thunderstorm development into the afternoon on Thursday. Over the Midwest, as the front slowly progresses, strong to severe thunderstorm development will be possible with large hail and damaging winds as the primary severe threats into the afternoon and early evening.

Strong to Severe Thunderstorms Possible for the Southern Plains on Friday

As the stationary front remains over the Southern Plains and begins to slowly lift northward throughout the day, strong to severe thunderstorms will continue to be possible over the region. Just to the east of the Rockies, upslope flow from the easterly winds due to high pressure to the north will provide the opportunity for strong to severe thunderstorm development along the mountain range, with thunderstorms progressing to the east. 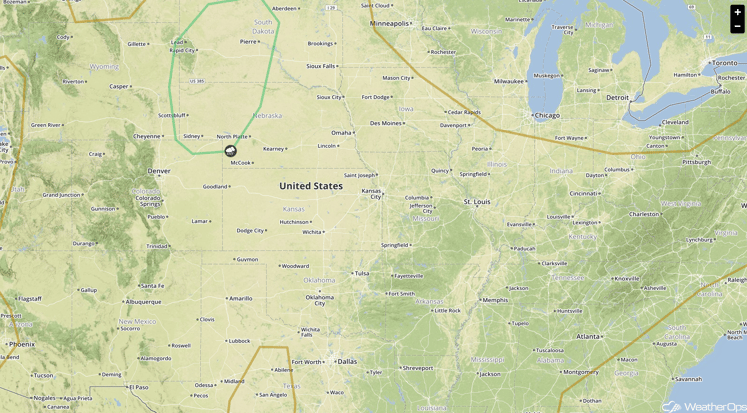 A Look at the Tropics

Tropical Storm Gaston is currently moving toward the northwest and this general motion is expected to continue over the next few days. Maximum sustained winds will remain near 70 mph with higher gusts. Gaston is expected to become a hurricane later today before weakening on Thursday.

A broad area of low pressure and tropical wave are located near the northern Leeward Islands. Squalls to tropical force will be possible over the northern Leeward Islands and portions of the northern Virgin Islands. Environmental conditions are currently marginally conducive for additional development, however this system could become a tropical depression or tropical storm over the next few days as it moves west-northwestward. Strong winds, heavy rains, and possible flash flooding and mudslides are expected to occur over portions of the Leeward Islands, Puerto Rico, Hispaniola, and the southeastern and central Bahamas.

An area of low pressure will develop over the Northern Plains on Saturday. Ahead of the low, thunderstorms will be possible along the associated warm front. By Sunday, a tropical system will approach the east coast of Florida and will bring the potential for heavy rainfall to portions of Central and Southern Florida.