Severe thunderstorms are expected Wednesday from the Upper Mississippi Valley into East Texas ahead of a cold front. 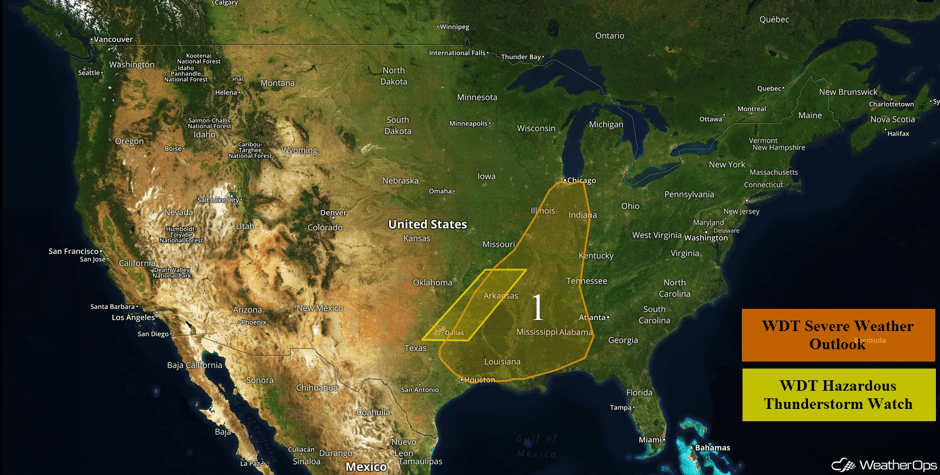 Severe Thunderstorms Expected Wednesday from the Upper Mississippi Valley into East Texas
Thunderstorms have developed across portions of the Southern Plains and will continue to progress eastward through the morning. Hail in excess of 2 inches in diameter, winds in excess of 70 mph, heavy rain, frequent lightning, and isolated tornadoes will be the primary hazards with these storms. Additional thunderstorms are expected to develop through the day as the cold front continues to progress eastward. Increasing instability and strong wind shear in place in addition to the forcing provided from the front will allow for the development of additional thunderstorms this afternoon and evening. Large hail, damaging winds, and tornadoes will all be possible with any storms that develop. Further to the north across Illinois and Indiana, storms will be more linear, posing a risk for hail and damaging winds.

In addition to the severe weather, excessive rainfall is expected. Accumulations of over 1.5 inches with locally higher amounts in excess of 3 inches are forecast. Flash flooding is likely in these areas.

Update 12:00pm CDT: Severe Thunderstorm Warnings along the leading edge of the squall line across Missouri and Arkansas. Hail and damaging winds are the main hazards. 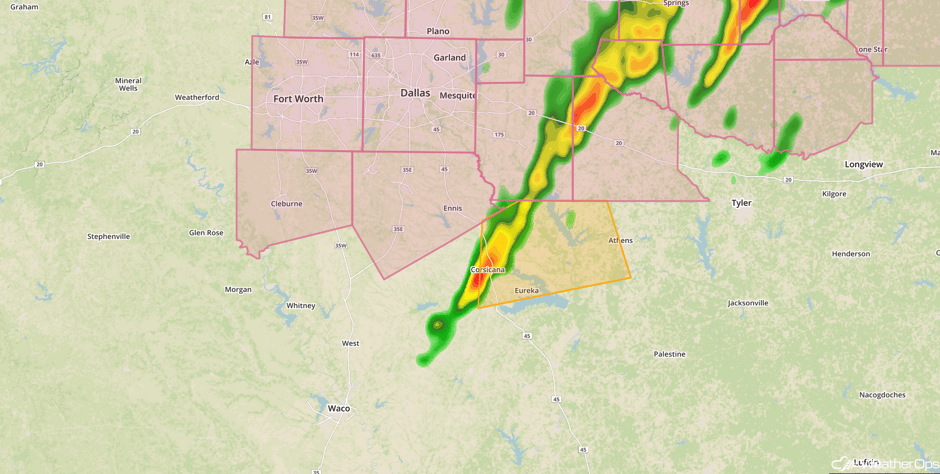 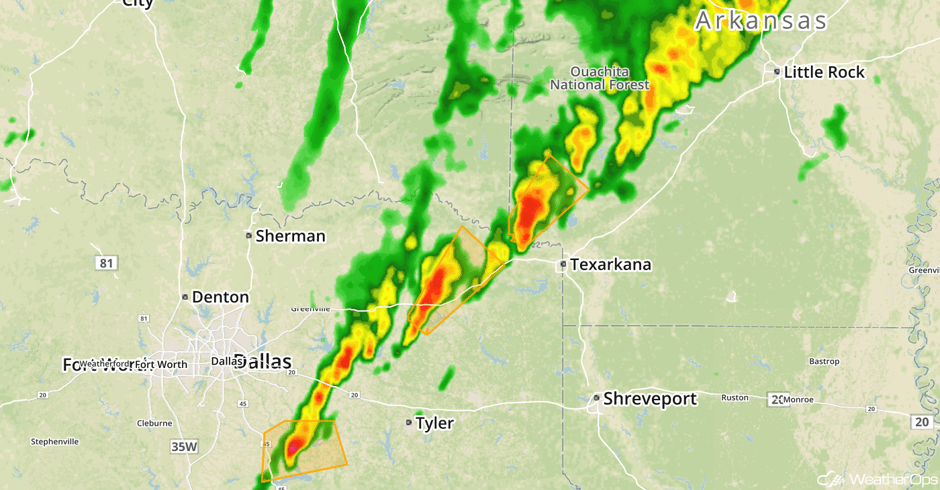 Update 1:07pm CDT: Severe Thunderstorm Watch in effect for portions of Illinois and Missouri until 7pm CDT. Large hail to 2 inches and damaging winds to 70 mph will be the primary hazards. 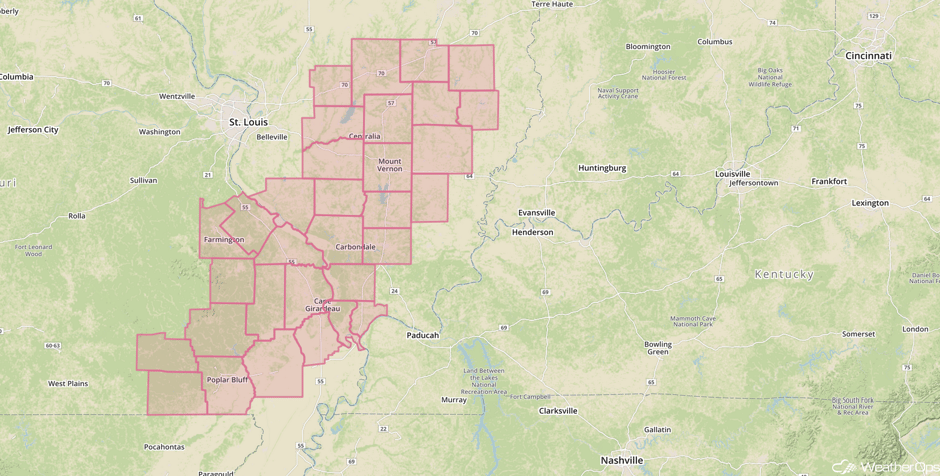 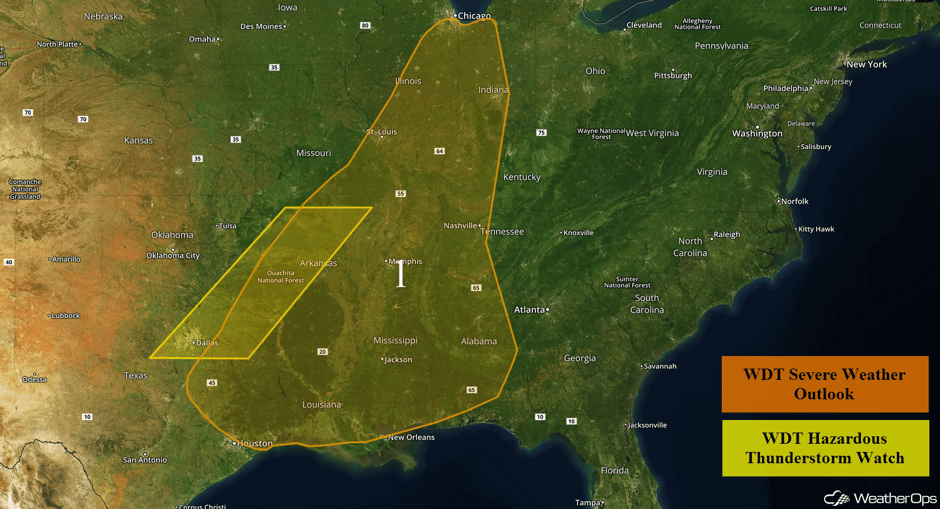 Strong to Severe Thunderstorms Possible from the Southeast to Mid Atlantic on Thursday
A large cold front will continue to push eastward on Thursday, and will increase the chances for severe weather across the Southeast into portions of the Mid Atlantic. Ongoing showers and thunderstorms during the morning will diminish, with the atmosphere becoming favorable for strong to possibly severe thunderstorms by the afternoon. Scattered thunderstorms are expected to develop during the afternoon across the Southeast, with more isolated storms expected to the north. Large hail and damaging winds will be the primary hazards with any storm that becomes severe. The threat will diminish shortly after sundown. 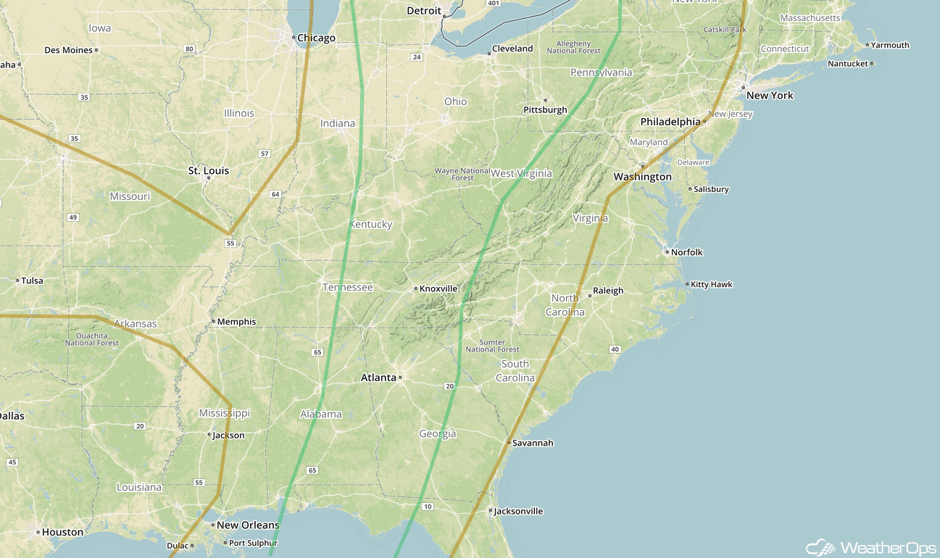 Thunderstorm Potential Thursday across the Plains
An area of low pressure will develop over the Southern Plains during the day on Thursday, with the atmosphere expected to become marginally favorable for severe thunderstorms across northern Oklahoma and southern Kansas. Thunderstorms are expected to develop during the afternoon hours north of a warm front. Large hail will be the primary hazard if storms are able to develop. 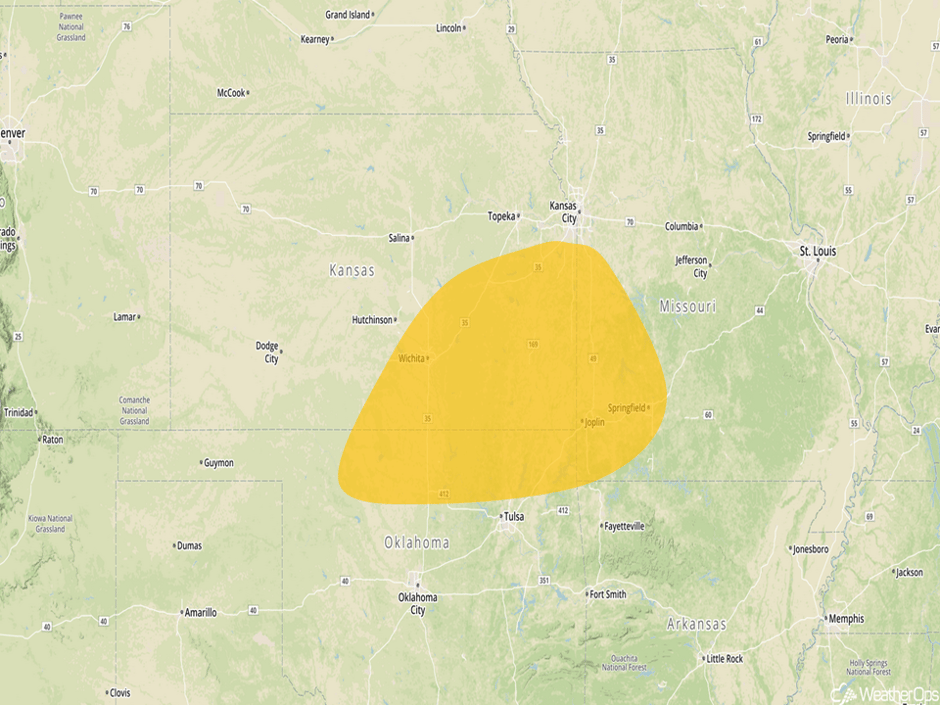 Severe Thunderstorms Expected from Southern Plains to Mid Mississippi Valley on Friday
Widespread severe thunderstorms are forecast to occur on Friday across a large area from central Texas into the Mississippi Valley. A low pressure will form over the Southern Plains during the day, with an associated warm front to lift northward into the Red River Valley, and a dryline to setup across central Texas. Tornadoes, very large hail, and damaging wind gusts will be possible with any storms that develop. Thunderstorms are expected to develop during the late afternoon hours along and south of the warm front and will increase in coverage and intensity throughout the evening. Over central/northern Oklahoma, storms will develop during the early evening north of the warm front and will be more elevated in nature, meaning the primary hazards will be large to very large hail. Looking into Texas, isolated to scattered storms will form during the late afternoon ahead of the dryline/cold front where all severe hazard types will be possible.

In addition to the severe weather, the potential for relatively widespread flooding will begin on Friday evening across southeast Oklahoma into the Ozarks as thunderstorms are expected to be widespread, intense, and persistent along the warm front. Training thunderstorms will be possible along the warm front, where rainfall accumulations of 2-3 inches will be common, with locally higher amounts of 5+ inches in areas that see the most persistent storms. Flash flooding can be expected.

A Look Ahead
The threat for widespread severe weather will only slightly shift eastward on Saturday, with the best chance for widespread severe being across Arkansas into the Texas Gulf Coast. A low pressure will begin to deepen over the Plains while tracking into the Mississippi Valley during the day, with an attendant warm front to be draped across the Ozarks into the Ohio Valley and cold front to push through Texas. Along the warm front, activity will be ongoing for much of the day and evening, with flooding and damaging wind gusts being the primary hazards. Over Arkansas into Texas, extremely warm and unstable air will be in place by the afternoon hours, with scattered storms to form ahead of the cold front over the red threat region. All severe hazard types will be possible, including very large hail, damaging winds, and tornadoes

In addition to the severe weather, flash flooding will be a major concern across much of the threat region on Saturday. Many areas will be receiving several rounds of thunderstorms from the previous day and Saturday, bringing two-day rainfall totals over 10 inches possible in some areas, especially across the Ozarks. Rainfall accumulations of a few inches will be more common. Flash flooding is almost a certainty, and river flooding may even become a problem.