Post-Tropical Storm Hermine will continue to track northeastward along the Northeast coast, bringing tropical force winds and heavy rain. An area of low pressure and cold front moving across the Upper Midwest and Central Plains will be the focal point for thunderstorms across this area. Moisture associated with Hurricane Newton will bring a risk for heavy rain and flooding for portions of the Desert Southwest. The remnants of Hermine will continue to bring tropical force winds and heavy rain to portions of the Northeast on Wednesday. Thunderstorms may develop across portions of the Midwest. Heavy rain will continue for portions of the Desert Southwest as Hurricane Newton makes landfall in Mexico. Into Thursday, heavy rainfall will be possible across the Missouri Valley along a stalled front.

Showers and thunderstorms are anticipated along a weak cold front across the Central Plains and Upper Midwest on Tuesday. Some storms will have the potential to produce severe winds and hail during the afternoon and evening. Further to the south and west, a developing low over the Central High Plains will promote the development of additional thunderstorms across the Front Range and points southward. Isolated large hail and severe winds should be the primary impacts before dark. Heavy rainfall amounts of 1-2 inches with locally higher amounts in excess of 3 inches will be possible.

Update 12:45pm CDT: Thunderstorms have developed across the Great Lakes. Small hail and damaging winds will be the primary hazards with these storms. 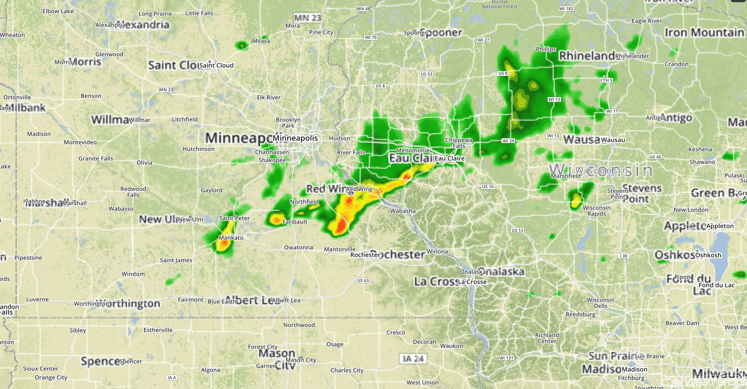 Post-Tropical Storm Hermine continues to meander slowly off the coast of the Northeast. This will continue to result in widespread tropical storm conditions across the Atlantic waters off the coasts of New Jersey, New York, Connecticut, Rhode Island, and southern Massachusetts.

Sustained winds of 55-65 miles per hour with gusts in excess of 75 mph will be likely. In addition to these tropical storm force winds, rough to very rough seas can be expected. A few waterspouts and heavy rainfall amounts of 1-2 inches may also be possible. Conditions should begin to subside over the next couple of days as Hermine weakens. Tropical storm conditions should end by late Thursday morning.

Excessive Rainfall Possible for Portions of the Desert Southwest on Tuesday

Moisture ahead of Hurricane Newton will overspread the Desert Southwest, allowing for areas of moderate to heavy rainfall. Overall rainfall amounts of 1-2 inches will be possible, as well as a risk for flash flooding.

Strong to Severe Thunderstorms Possible across the Northeast on Thursday

Post-Tropical Storm Hermine should be on its last leg on Wednesday as the system will be significantly weakened. There will still be a risk for tropical storm winds and some moderate to heavy rainfall before the storm finally falls apart and begins to move to the northeast out of the region.

Strong to Severe Thunderstorms Possible Wednesday for Portions of the Midwest

Some strong to severe thunderstorms will be possible for the Midwest on Wednesday along a stalled front. Ongoing thunderstorms from Tuesday may limit daytime heating, but destablization should be sufficient for the development of some stronger thunderstorms during the afternoon along the front. Large hail, heavy rainfall amounts of 1-2 inches, and localized flooding will be possible with these storms. 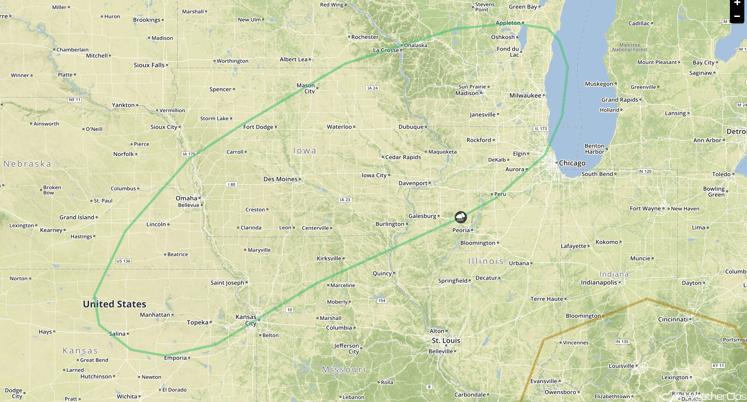 Excessive Rainfall Possible for the Desert Southwest on Wednesday

As Hurricane Newton continues to make landfall in Mexico, plentiful tropical moisture will surge into the Desert Southwest. Rainfall amounts of 1-3 inches and locally heavier amounts will be possible.

Another round of thunderstorm activity is likely along a sagging frontal boundary across the Missouri Valley. Rainfall amounts of 1-2 inches with locally higher amounts in excess of 3 inches will be possible. 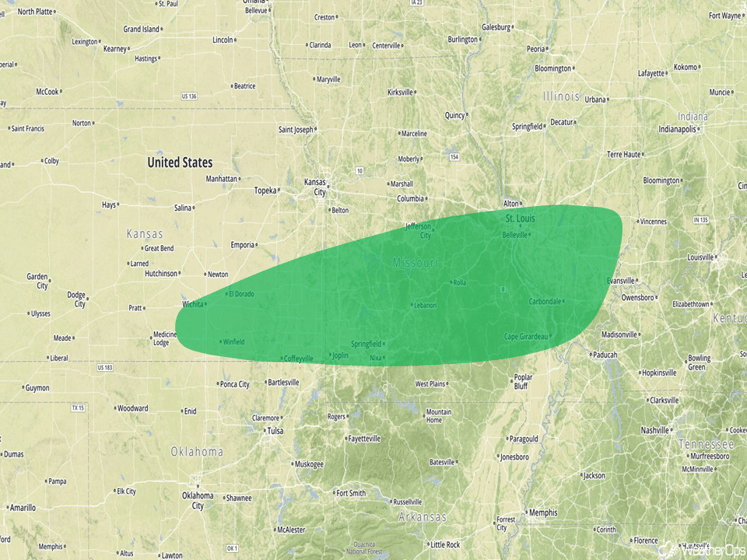 Hurricane Newton (yellow oval) will make landfall in Mexico on Tuesday, Gradual weakening is expected over the next 24 hours with more rapid weakening expected on Wednesday as it moves further inland.

Post-Tropical Storm Hermine (blue oval) is currently moving toward the west at 3 mph with erratic motion expected through tonight before slowly moving to the northeast on Wednesday. Maximum sustained winds are at 60 mph with higher gusts. Additional weakening is anticipated during the next few days and may weaken below tropical storm status by Thursday.

A disorganized area of thunderstorms over the Central Caribbean and adjacent land (red oval) areas are associated with a tropical wave. Upper level winds are unfavorable, and development of this system is unlikely as the wave moves across the Caribbean Seas this week. Periods of locally heavy rainfall and gusty winds could occur over Hispaniola on Tuesday and over Jamaica and eastern Cuba on Wednesday in association with this disturbance.

A tropical wave off the west coast of Africa (green oval) is producing cloudiness and thunderstorms. An area of low pressure is expected to form in association with the wave several hundred miles west-southwest of the Cabo Verde Islands in a couple of days. Environmental conditions appear conducive for the gradual development of this system as it moves west-northwestward into the central tropical Atlantic.