Thunderstorms are expected for the Central Gulf Coast through Wednesday as Tropical Storm Gordon approaches. In addition to these thunderstorms, there will be a potential for excessive rainfall from the Gulf Coast into the Lower Mississippi Valley through Thursday. A cold front will be the focus for thunderstorm development Tuesday across the Upper Midwest. These thunderstorms may pose a risk for excessive rainfall through Wednesday. Continued rainfall across southern Texas may lead to a risk for flooding.

Thunderstorms for the Central Gulf Coast through Wednesday
In addition to the potential for hurricane force winds along the coast, severe thunderstorms are expected to the north and east of Gordon's center. A few brief tornadoes cannot be ruled out across southern Mississippi, Alabama, and the far western Florida Panhandle.

Excessive Rainfall from the Gulf Coast into the Lower Mississippi Valley through Thursday
Significant rainfall is forecast through Thursday in association with Tropical Storm Gordon, with the heaviest rainfall near and northeast of the center. Rainfall accumulations of 4-6 inches with locally higher amounts in excess of 8 inches are expected. This will lead to a risk for flash flooding and river flooding. 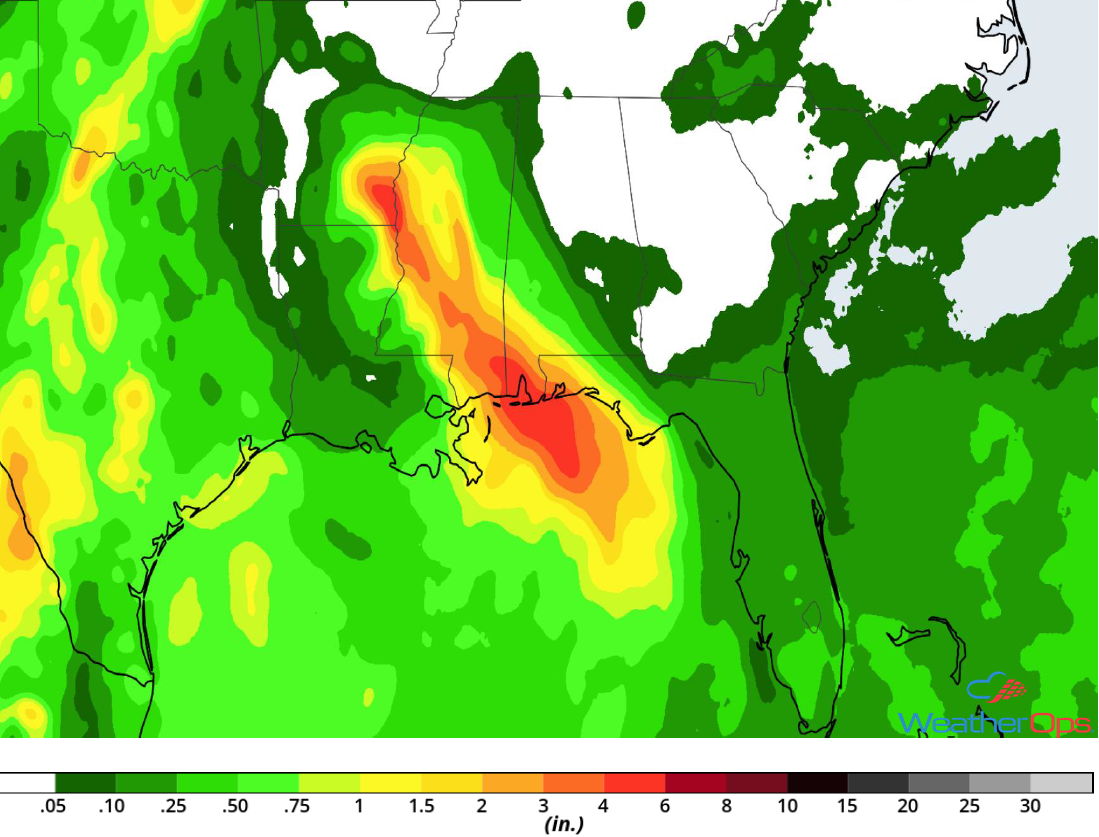 Risk for Thunderstorms Tuesday across the Upper Midwest
Scattered showers and thunderstorms are ongoing ahead of a slow moving cold front. Thunderstorm intensity may increase as daytime heating increases this afternoon. Strong wind shear will support the risk for a few tornadoes, but damaging winds and large hail will be the primary hazards with these storms. 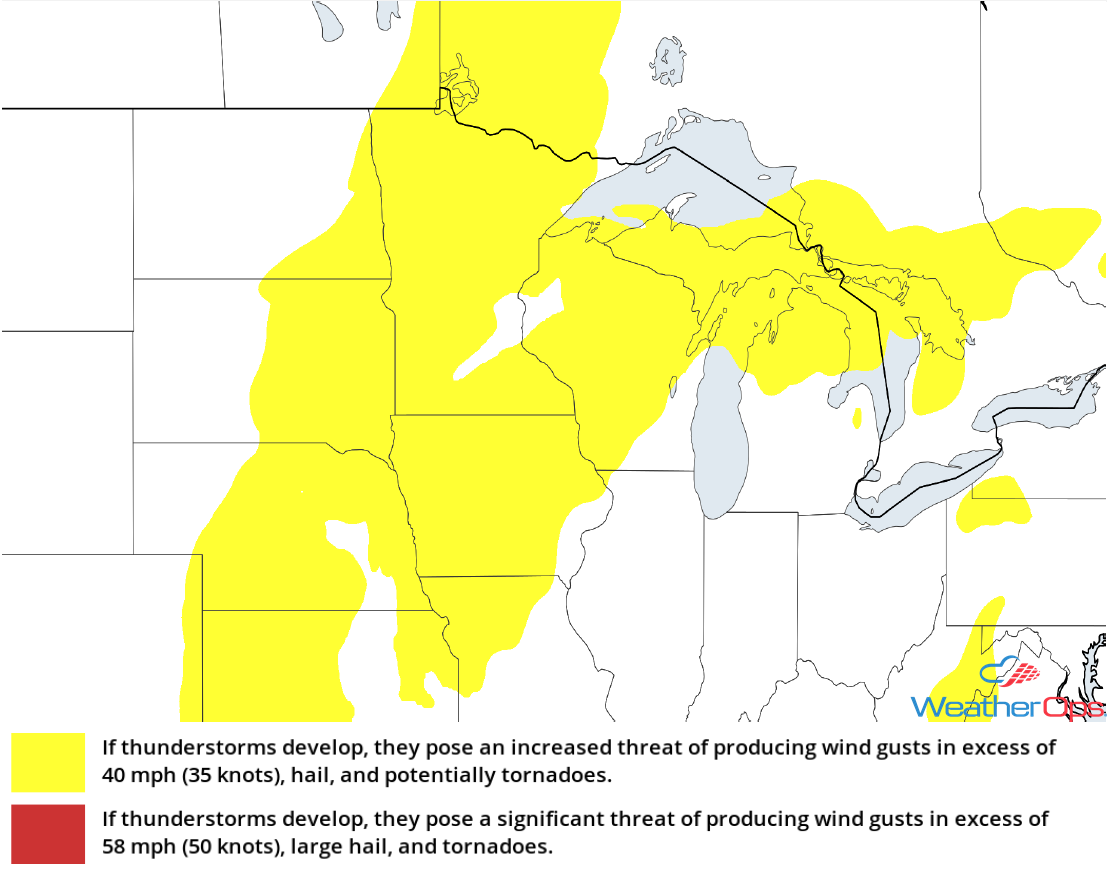 Potential for Excessive Rainfall across the Central Plains into Great Lakes through Wednesday
In addition to the thunderstorms described above, there will be the potential for excessive rainfall. Rainfall amounts of 1-3 inches with locally higher amounts in excess of 4 inches are expected. 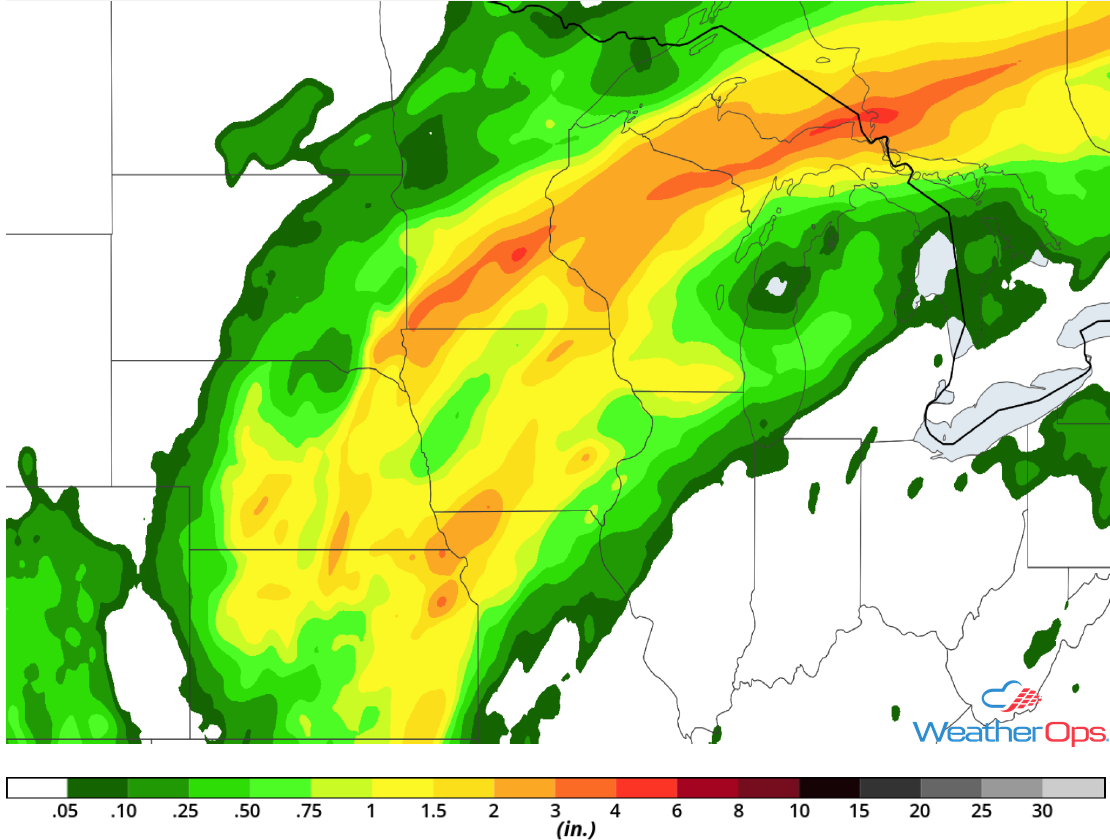 Thunderstorms for the Lower Great Lakes Wednesday
A broken squall line may develop ahead of a cold front on Wednesday. With strong instability and wind shear in place, there will be a risk for damaging winds and large hail with the stronger storms. Activity will likely develop during the mid afternoon and continue through the late evening.

Risk for Thunderstorms on Thursday across the Northeast
Strong instability and wind shear will allow for the development of thunderstorms ahead of a cold front on Thursday. Thunderstorms will develop during the morning before moving south-southeastward through the afternoon. Low risks of damaging winds and large hail will accompany this activity.

Excessive Rainfall from the Central Plains into the Mid Mississippi Valley Thursday
A series of mid level disturbances will move along a stalled front across the central US on Thursday. Plentiful low level moisture moving northward will allow for the development of strong thunderstorms. Rainfall amounts will range 1-2 inches with locally higher amounts in excess of 3 inches. 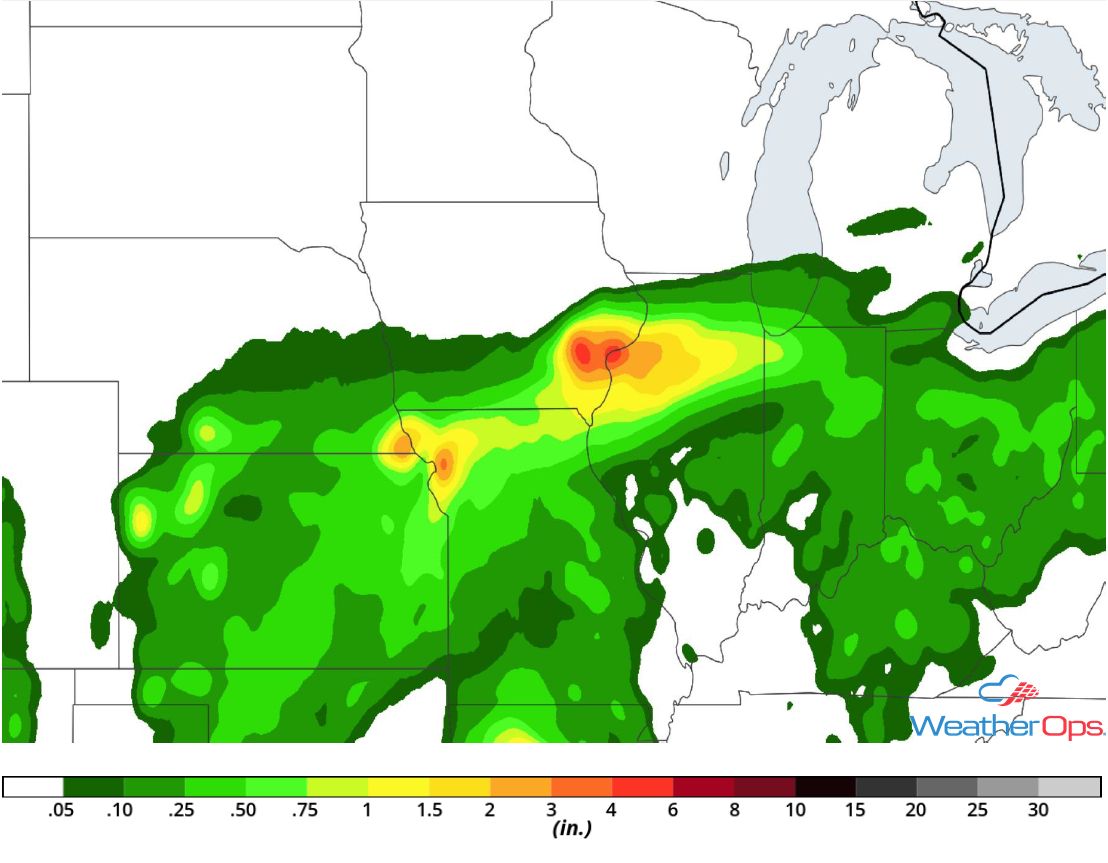 Tropical Update
Tropical Storm Gordon (green oval) is 145 east-southeast of the mouth of the Mississippi River and is moving northwest at 15 mph. This general motion is expected until landfall tonight along the north central Gulf Coast. A northwestward motion with a decrease in forward speed is expected after landfall. A turn toward the north-northwest and eventually the north is expected. On the forecast track, the center of Gordon will approach the north central Gulf Coast late this afternoon or evening and move inland over the lower Mississippi Valley tonight and early Wednesday. Sustained winds are at 65 mph with higher gusts.  Some strengthening is expected and Gordon is expected to make landfall as a hurricane. Rapid weakening is expected as it moves inland. Hurricane Warnings are in effect from the mouth of the Pearl River to the Alabama-Florida border. A Tropical Storm Warning is in effect from the Louisiana coast into the Florida Panhandle.

A tropical wave (blue oval) accompanied by a broad area of low pressure is located a few hundred miles south-southeast of the Cabo Verde Islands. This system is expected to slowly move westward to west-northwestward for the next several days. Although this disturbance continues to produce disorganized showers and thunderstorms, environmental conditions are forecast to become more conducive for further development. A tropical depression is likely to develop late this week or this weekend.

A Look Ahead
The remnants of Gordon will continue to move northwestward on Friday, bringing heavy rain to portions of the Southern Plains. Into the weekend, the remnants of Gordon will move across the Mid Mississippi Valley and into the Great Lakes. By Monday, showers and thunderstorms will extend from the Northeast into the Mid-Mississippi Valley.