Tropical storm conditions are expected along the coast of eastern North Carolina Tuesday as Hurricane Maria moves northward. Heavy rain is expected across portions of southwest Texas to western Oklahoma on Tuesday ahead of an upper level trough. 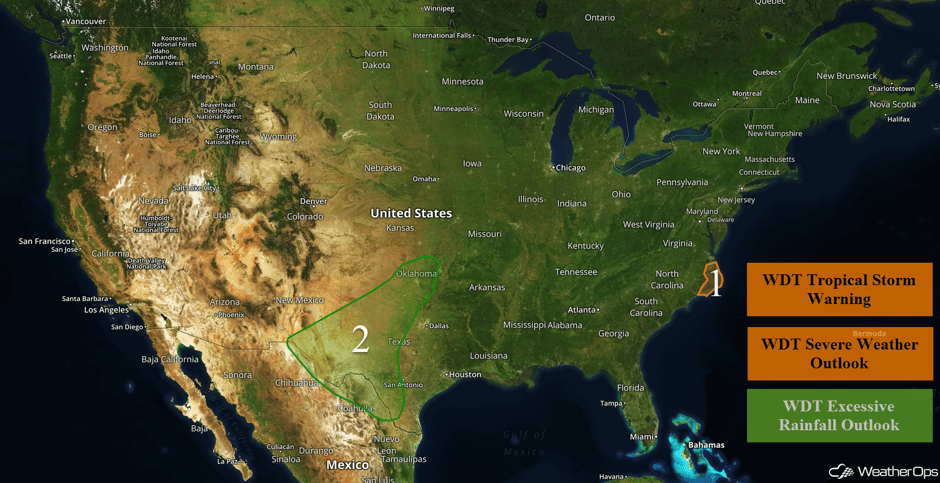 Tropical Storm Conditions for Eastern North Carolina Tuesday through Thursday
Hurricane Maria continues to move northward, and the center will stay well off the East Coast. Maria is a large storm and is generating tropical force winds over a wide area. Tropical storm force winds of 35-45 mph, with gusts exceeding 55 mph, are expected in the region starting today and ending Thursday morning. In addition to windy conditions, heavy rainfall is expected. Rainfall amounts of 1-2 inches with locally higher amounts in excess of 3 inches are forecast. Maria is also likely to produce storm surge in excess of 2-4 feet in some areas.

Thunderstorms and Excessive Rainfall Tuesday from Southwest Texas to Western Oklahoma
A stalled front stretching from southwest Texas into southern New Mexico will continue to promote the development of thunderstorms. Deep moisture spreading into the region combined with favorable wind shear will allow for a few strong to severe thunderstorms. Gusty winds and hail will be the primary hazards with these storms. In addition, heavy rain is also expected. Rainfall amounts of 3-5 inches with isolated higher amounts in excess of 6 inches are forecast.

Continued Excessive Rainfall for West Texas Wednesday and Thursday
The slow moving cold front moving across the central US is expected to stall over Southwest Texas. This boundary will continue to interact with moisture being brought northward from the Gulf of Mexico. This will bring even more rainfall to already saturated ground on Wednesday. Showers and thunderstorms associated with this front are expected to be widespread and persist into Thursday. Two day rainfall totals of 3-6 inches with locally higher amounts are forecast. Localized flash flooding will also be a concern.

Tropical Update
Hurricane Maria (red oval) is 175 miles southeast of Cape Hatteras, North Carolina and is moving northward at 7 mph. This general motion is forecast to continue through tonight with a decrease in forward speed. A turn toward the north-northeast is expected on Wednesday. On the forecast track, the center of Maria is forecast to become a tropical storm within the next day or so. Maximum sustained winds are at 75 mph.

Hurricane Lee (green oval) is located 675 miles east of Bermuda and is moving westward at 10 mph. Maximum sustained winds are at 105 mph with higher gusts. Some additional strengthening is expected through Wednesday before weakening on Thursday.

A Look Ahead
Except for some rain across Texas, generally calm conditions are expected for much of the country on Friday. The remnants of Maria will be moving northeastward, but strong swells and rip currents may persist along the coast of the Mid Atlantic through the weekend.