Thunderstorms for the Midwest on Tuesday
A cold front tracking eastward across the Midwest will be a focus for thunderstorm development during the afternoon and evening. Widespread cloud cover may limit instability over the region. Damaging winds will be the primary hazard with any storms that develop, but there will also be a risk for large hail and a few tornadoes. 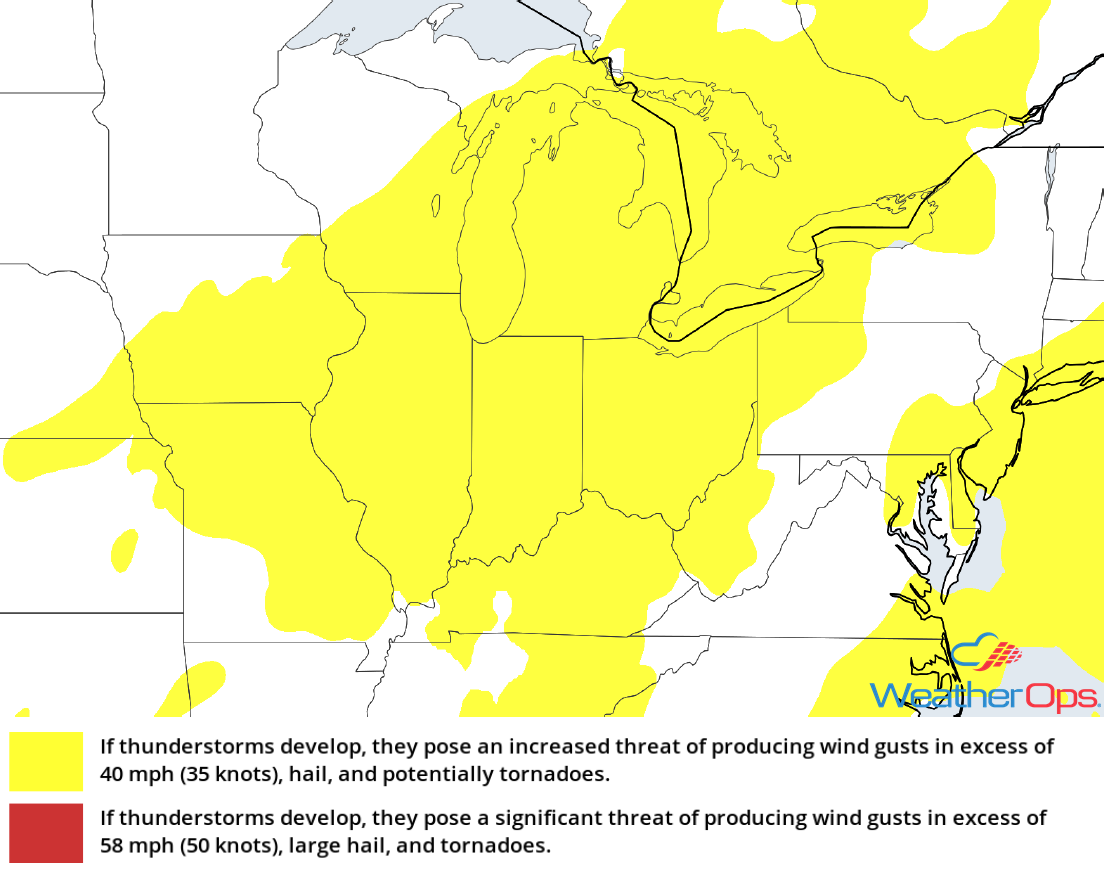 Excessive Rainfall Tuesday for the Ohio and Tennessee Valleys
Showers and thunderstorms developing along and ahead of a slow moving cold front will spread across the region today and tonight. Deep moisture over the region will allow for the potential for excessive rainfall. Rainfall amounts will range 1-2 inches with locally higher amounts in excess of 3 inches, leading to a risk for flooding. 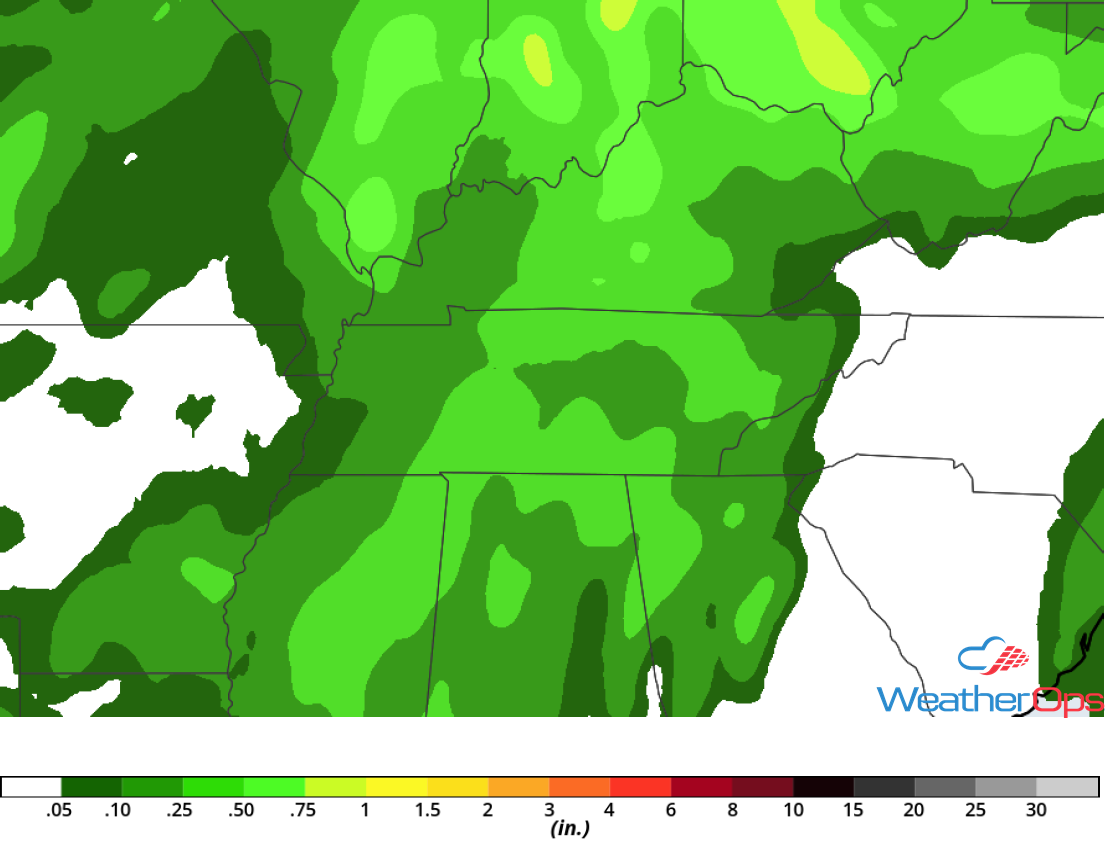 Risk for Excessive Rainfall across the Northeast on Tuesday
Moist air will move into the Northeast on Tuesday as a warm front moves northward. This will allow for the development of showers and thunderstorms, some of which may produce heavy rainfall. Rainfall amounts of 1-3 inches and locally higher amounts in excess of 4 inches are forecast, leading to an increased risk of flooding. 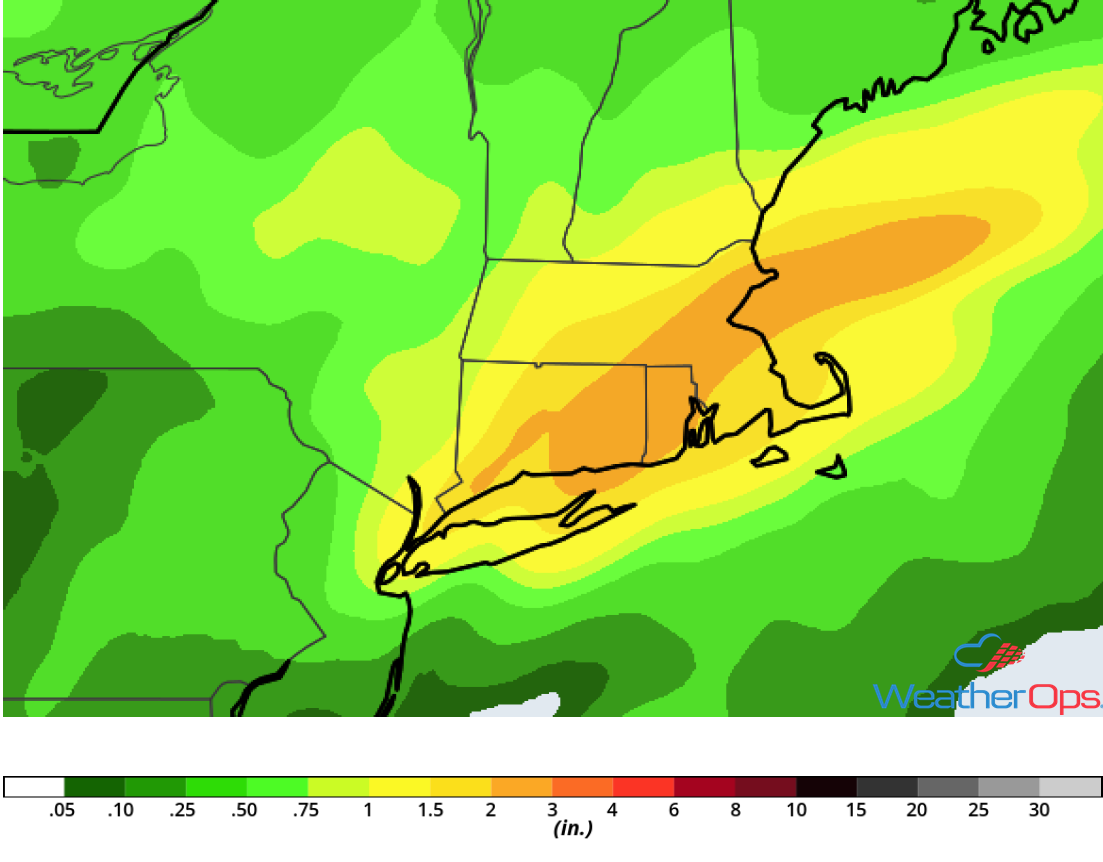 Potential for Thunderstorms Wednesday from the Ohio Valley into New England
A cold front is forecast to progress eastward across the eastern US on Wednesday. Thunderstorms may be ongoing along and ahead of the front during the morning. However, by the afternoon, instability will build and additional thunderstorms may develop. Some of this activity may be severe with damaging winds the primary hazard, but there will also be a potential for large hail and tornadoes. 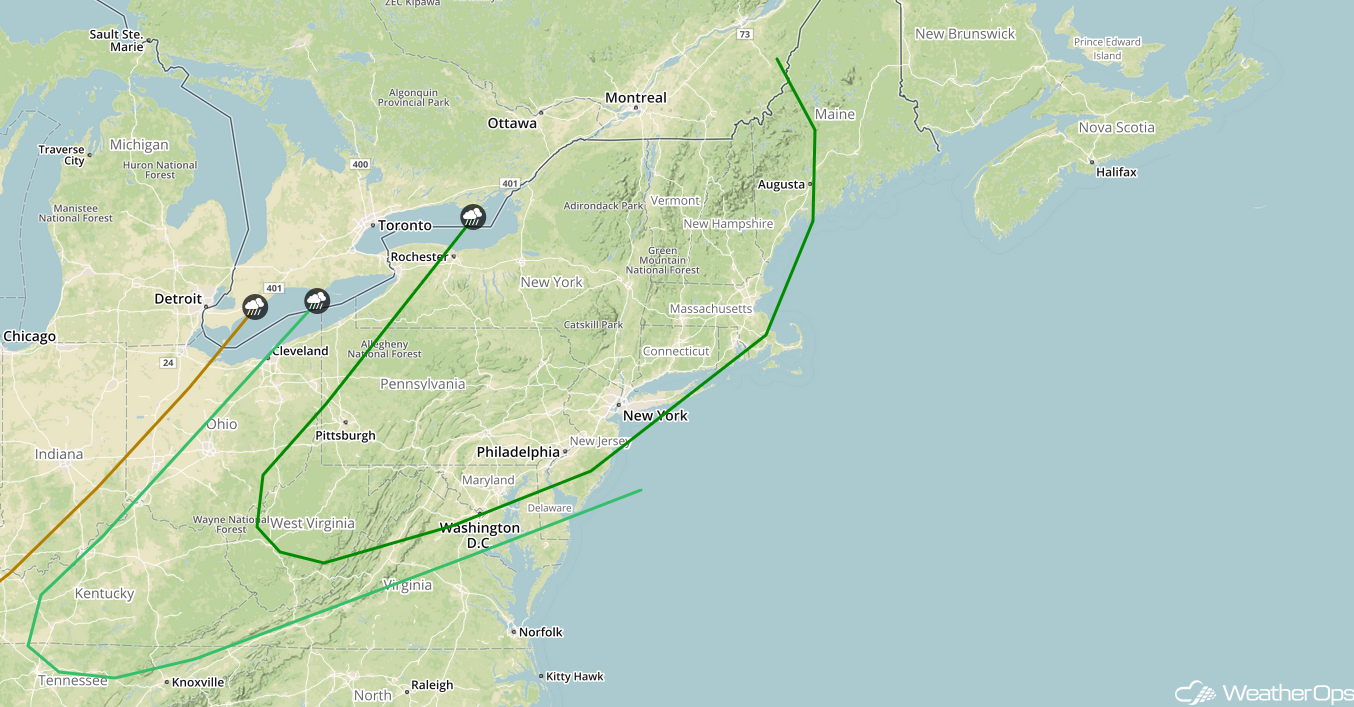 Excessive Rainfall for the Tennessee Valley on Wednesday
A cold front that is expected to stall over the Tennessee Valley will lead to a continued risk for showers and thunderstorms on Wednesday. As deep moisture continues to stream northward across the region, there will be a potential for excessive rainfall. Rainfall amounts of 1-3 inches with locally higher amounts in excess of 4 inches are expected. This will lead to a potential for flooding, especially in areas that receive heavy rainfall on Tuesday. 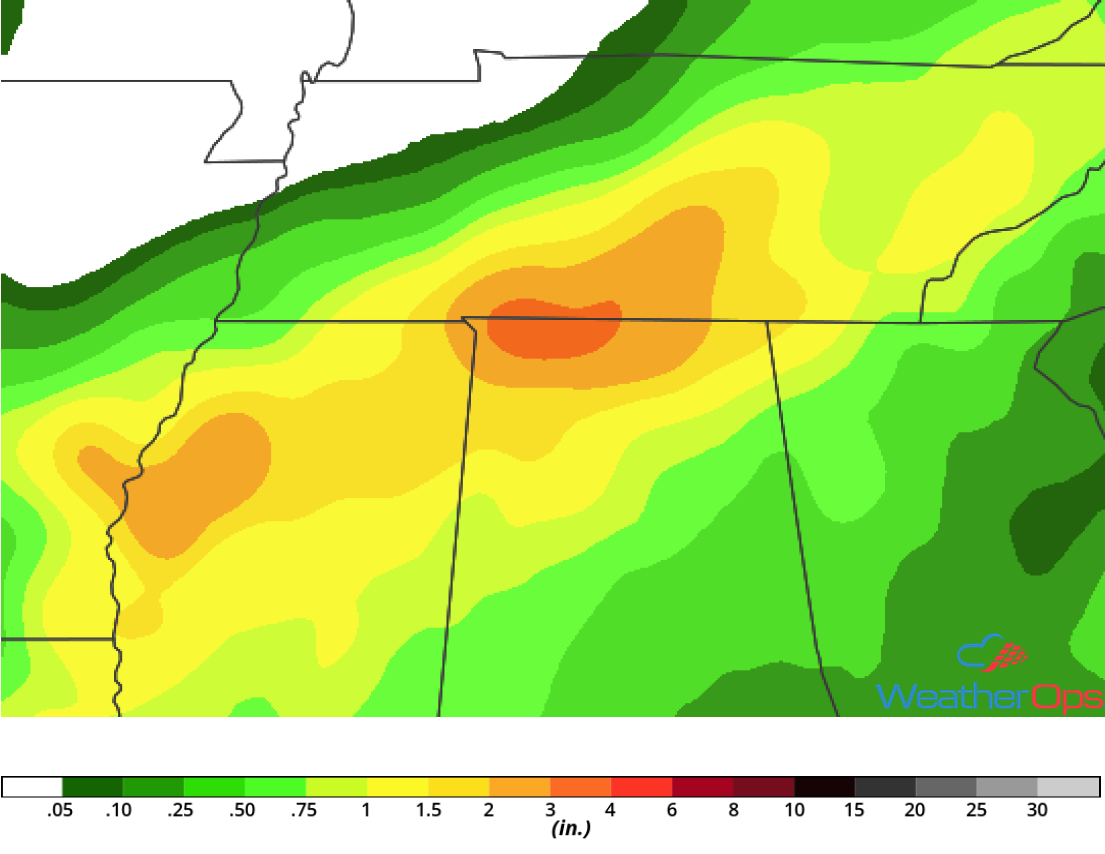 Thunderstorms Thursday across the Southeast
A slow moving cold front is forecast to track through the Southeast on Thursday before stalling later in the day. Thunderstorms may develop along the front, some of which may be strong to severe. Gusty winds will be the primary hazards with these storms. 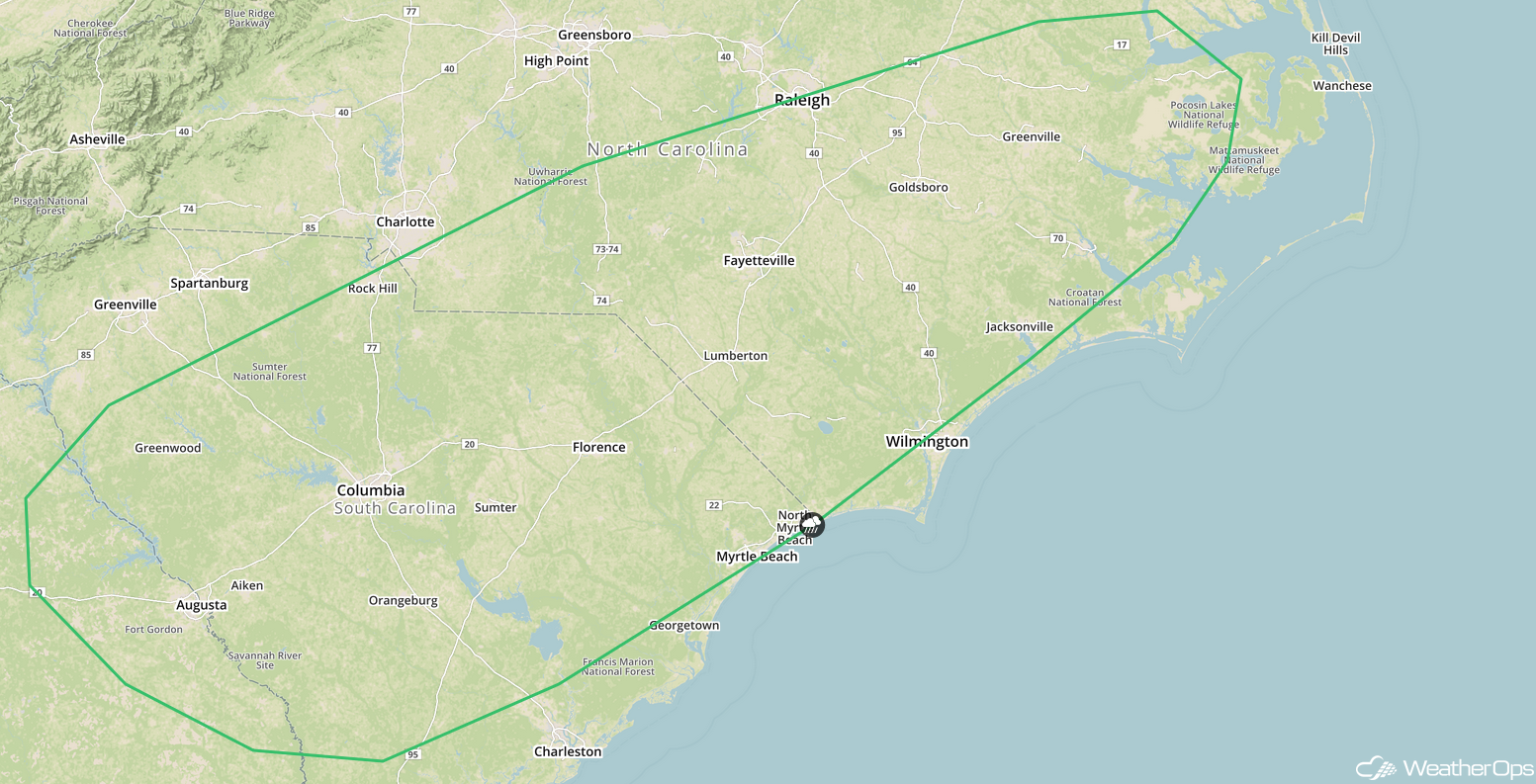 Tropical Update
A broad area of low pressure located 260 miles south of Cape Hatteras, North Carolina (green oval) continues to produce showers and thunderstorms on its north side. This system could still become a tropical depression today while it moves northwestward. By tonight and Wednesday, additional development will be unlikely due to strong upper level winds. Regardless of development, this system is expected to bring scattered showers and thunderstorms across the Carolinas later today and tonight. In addition, dangerous surf conditions are expected along the North Carolina coast later today.

The remnants of Kirk (red oval) are located about 950 miles east of the Windward Islands and are moving westward at 25 mph. This system continues to produce a large area of showers and thunderstorms. The disturbance could redevelop into a tropical cyclone over the next day or two. Regardless of development, there will be the potential for gusty winds and locally heavy rain across the Windward and Leeward Islands. 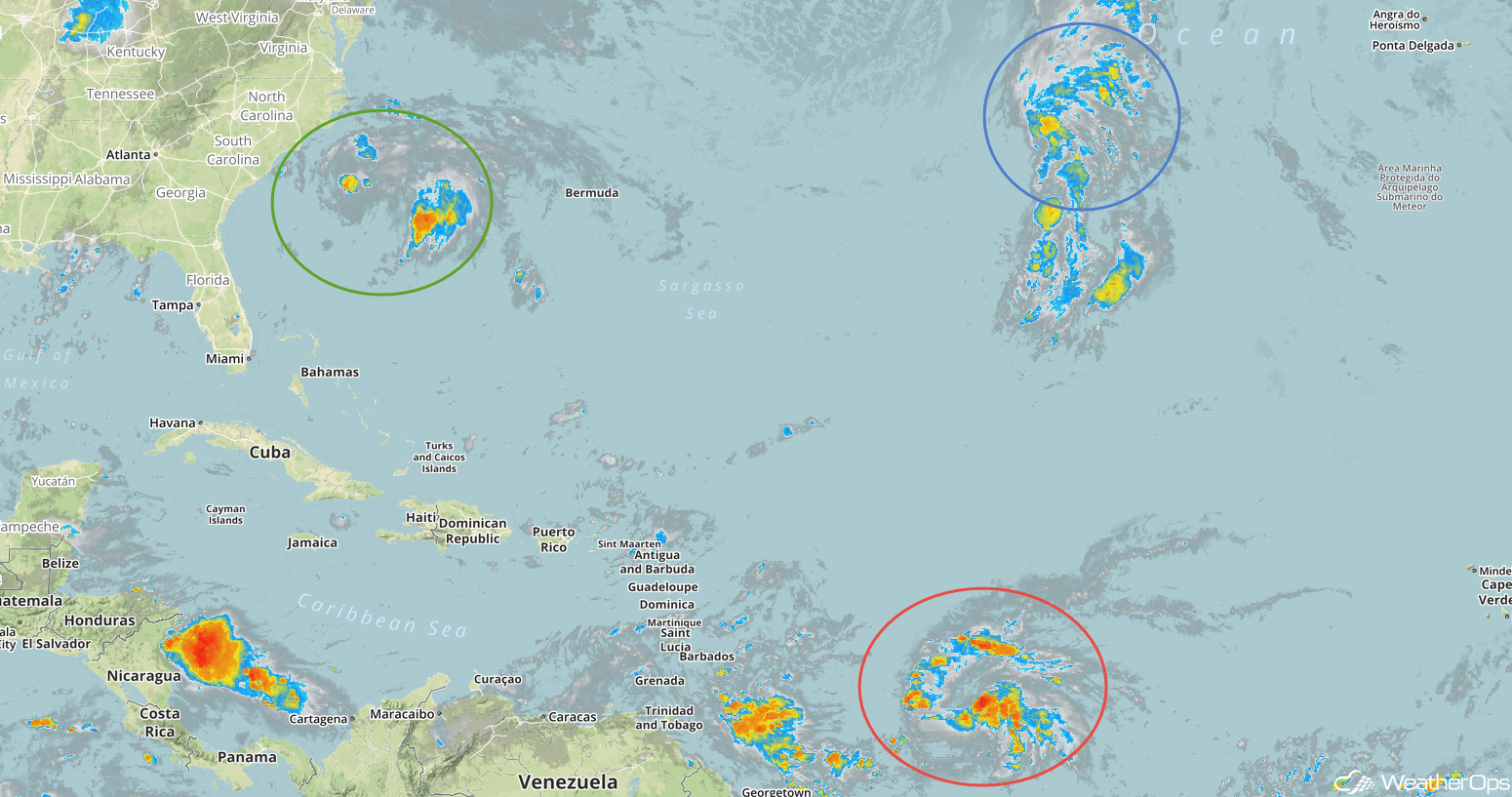 A Look Ahead
Showers and thunderstorms may extend from the Central Plains into the Great Lakes on Friday ahead of a cold front. On Saturday, showers are forecast across the Lower Mississippi Valley. This activity may extend into portions of Texas on Sunday. A cold front may allow for thunderstorm development Monday across the Upper Midwest and Great Lakes.