Severe thunderstorms will continue Tuesday from the Great Lakes to the Southeast ahead of a cold front associated with an area of low pressure moving through the Great Lakes. Snow is likely to develop over the higher elevations of California and Oregon throughout the day. An area of low pressure will move across the northern US, bringing snow to portions of the Northern Plains, Upper Midwest, Great Lakes, and Northeast through Wednesday. 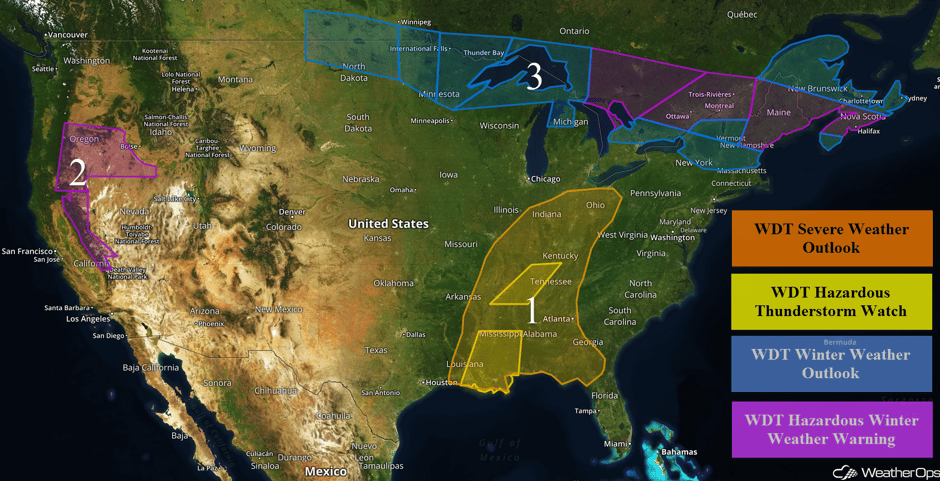 Region 1
Severe thunderstorms will continue throughout the day across Region 1. Warm moist air is moving northward toward the Great Lakes, as well as a surface low. A cold front extends southward from the low and will move across the region throughout the day. In addition, an upper-level disturbance will be moving across the region. Severe thunderstorms capable of large hail and tornadoes are already ongoing across portions of Louisiana, Mississippi, Alabama, and the Florida Panhandle. Storms will likely intensify through the afternoon. Further north, storms should develop along the cold front with damaging winds the primary hazard. 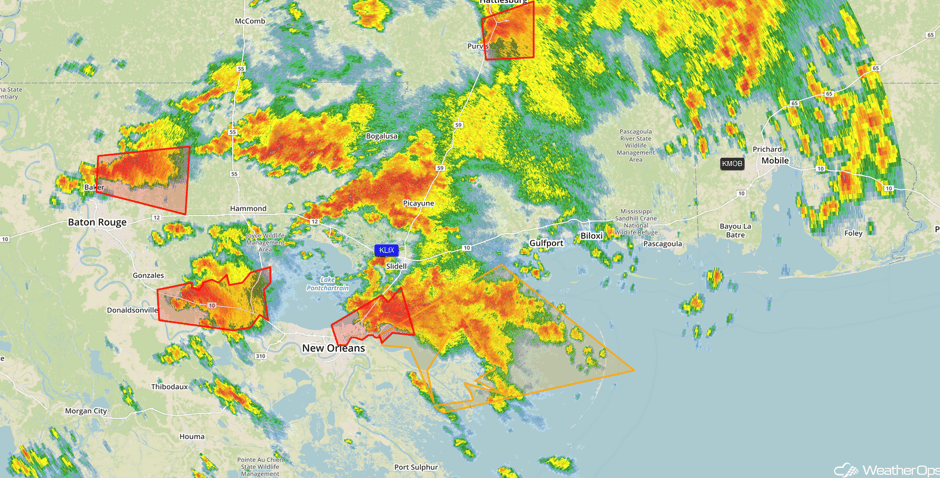 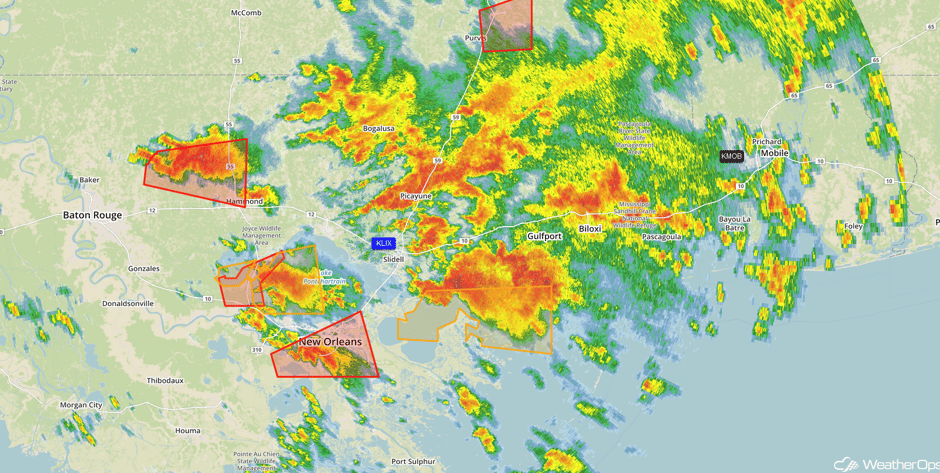 Unreal Tornado view out of Michoud (New Orleans East). Never a tornado quite like this for NOE https://t.co/gJNAlZ66vJ #LAwx pic.twitter.com/o9uf5BJX1B 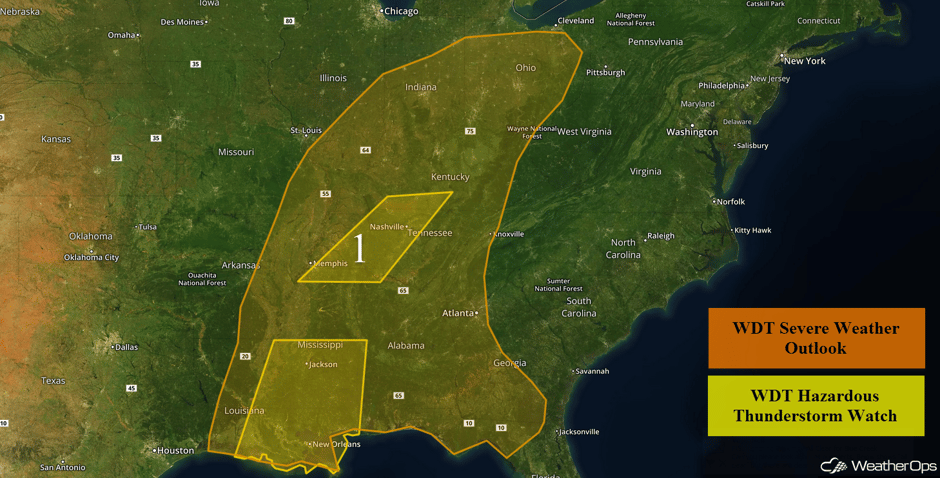 Region 2
Strong onshore flow from the Pacific combined with a series of passing disturbances will continue to produce significant snowfall across the region through Tuesday evening. Snow levels are forecast to begin rising on Tuesday. Snowfall accumulations of 2-3 feet are forecast above 6,000 feet across portions of California. In addition, southerly to southwesterly winds of 20-30 mph with gusts of 50-60 mph are expected. Across eastern Oregon and southwestern Idaho, snow will continue through the morning. Snowfall totals of 3-6 inches with locally higher amounts are expected.

Strong to Severe Thunderstorms Possible across the Southeast on Wednesday
As an area of low pressure continues to move northeastward on Wednesday, the associated cold front will move southeastward. While there will be ongoing thunderstorms during the morning, instability will build ahead of the front. With this instability in place and forcing provided from the front, some isolated to scattered strong to severe thunderstorms may develop across portions of the Southeast. Small hail and damaging winds will be the primary hazards with any storm that develops. 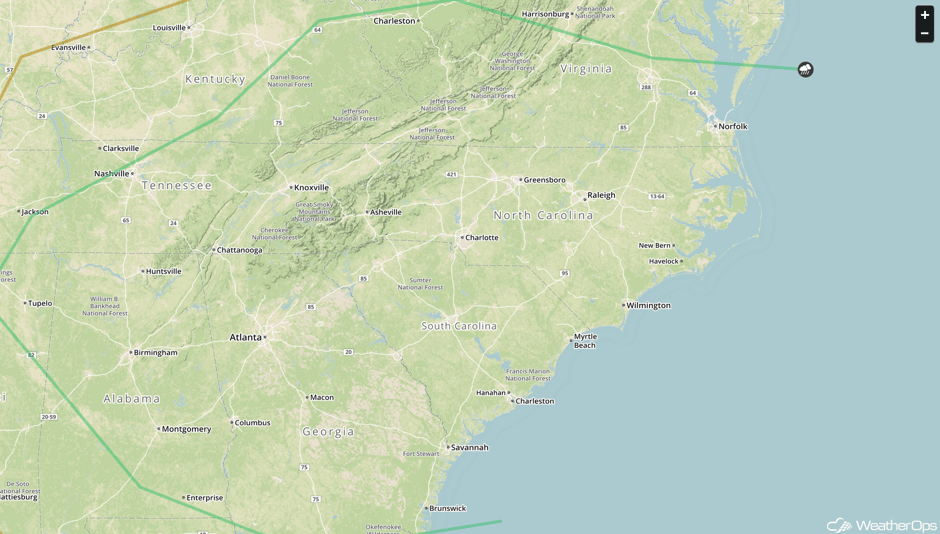 Excessive Rainfall Possible for Portions of Northern California Wednesday and Thursday
A Pacific low pressure system will make its way into the Pacific Northwest on Wednesday into Thursday with the associated cold front reaching the California coastline by early Thursday morning. Out ahead of this front, anonymously high moisture will spread across the outlook area. With the front promoting forcing and deep moisture across the area, showers will increase in intensity and coverage becoming a steady rain across northern California on Wednesday. This steady rainfall will continue into Friday as the low moves little over the next few days. This will lead to the possibility for heavy to excessive rainfall with general rainfall amounts of  6-10 inches locally 12+ possible which will lead to localized flooding and excessive runoff.

A Look Ahead
On Friday, mountain snow and scattered showers is forecast across the Pacific Northwest as an area of low pressure approaches the region. Into the weekend, light rain and snow may develop across the Great Lakes and Ohio Valley, on Saturday.