Thunderstorms across Mississippi and Alabama on Tuesday


A cold front is producing widespread showers and thunderstorms across the Lower Mississippi Valley this morning. As this activity spreads eastward, daytime heating and convergence along the front will support at least a low threat for isolated severe thunderstorms. Primary impacts with any storms will be limited to damaging wind gusts; however, a few tornadoes cannot be ruled out with any persistent areas of rotation within the line. The greatest threat for any severe impacts will stretch through the morning and afternoon hours. Later this evening, the threat will gradually diminish, but not completely disappear.

Excessive Rainfall Tuesday across the Tennessee Valley
A large upper low tracking through the Midwest on Tuesday will also drag a trailing cold front through the eastern US throughout the day. Ongoing showers and thunderstorms will gradually shift eastward with a low threat for excessive rainfall forecast across parts of the Tennessee Valley. Total rainfall accumulations of around an inch will be common with locally higher amounts closer to 2 inches. Minor flooding and local runoff will be possible, although not expected to pose major impacts. 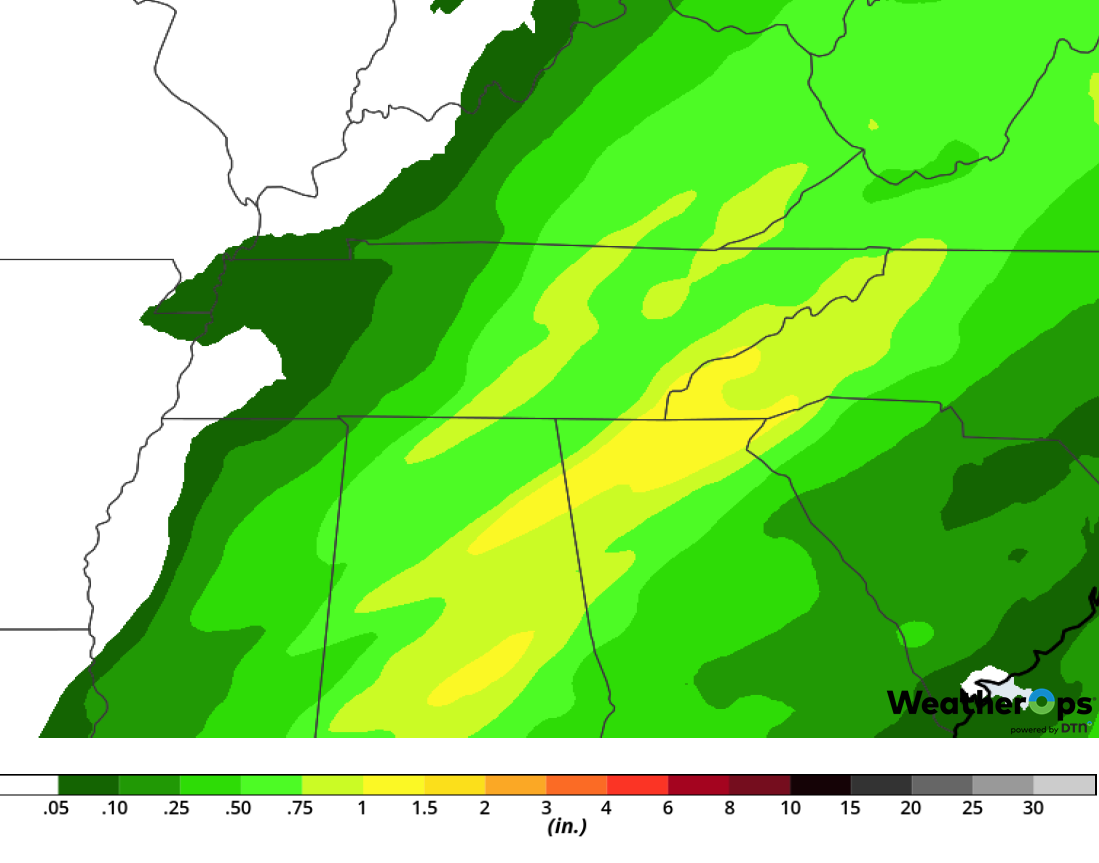 Snow for the Pacific Northwest and Northern Rockies through Thursday


An active pattern of upper lows will continue to pivot across the Northwest region over the next few days. This will maintain moderate to heavy snow across the mountains with lesser accumulations possible across the lower elevations. From the Cascades, eastward, into the Northern Rockies, snowfall amounts on the order of 1-2 feet are expected through Thursday. At the lower elevations, several inches of snow are forecast, ranging from 2-4 inches with locally higher amounts in excess of 6 inches. 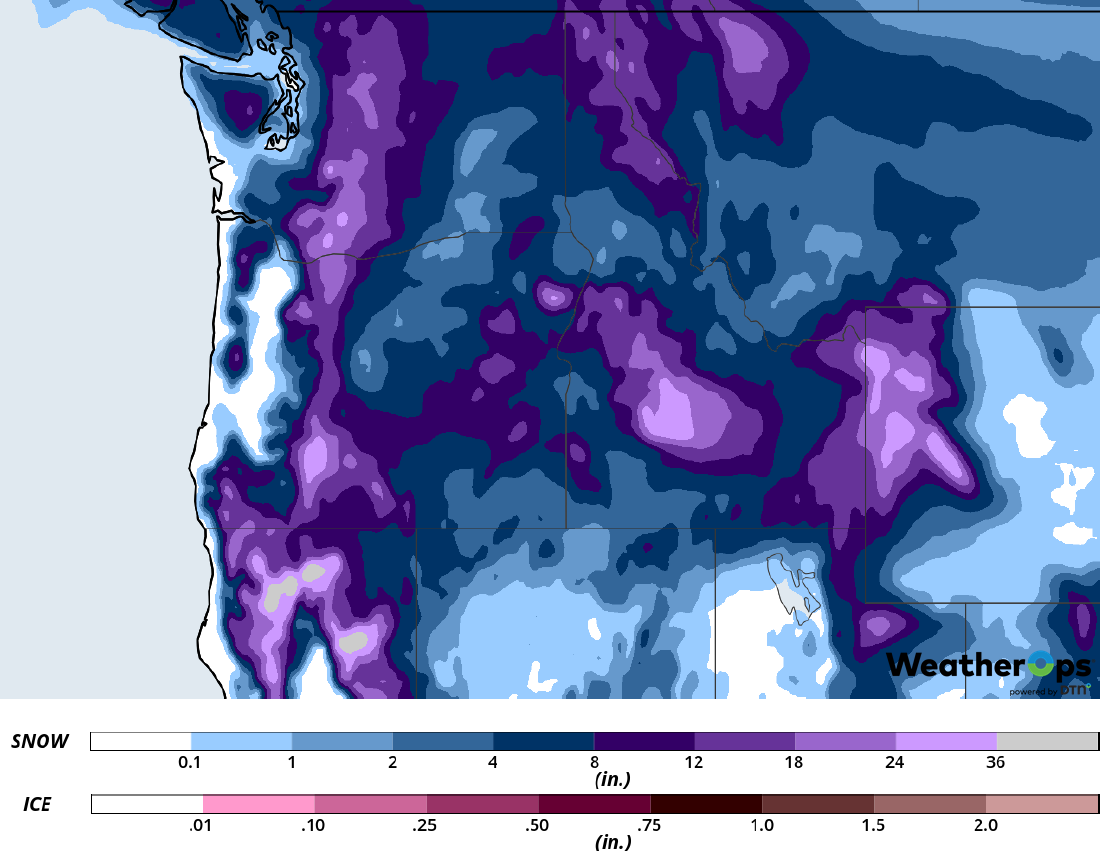 Freezing Rain Tuesday across the Mid Atlantic into New England
Freezing rain will continue throughout the day on Tuesday across parts of the Mid-Atlantic, northward, into Upstate New York and Southern New England. While total ice amounts have trended downward over the past 24 hours, the entire region will be at risk for at least a trace to a tenth of an inch. Higher accumulations of ice will still be possible, but coverage will be more isolated with 0.25-0.50 inches possible. Regardless of exact totals, increasing westerly winds Tuesday night combined with even light accumulations will likely result in some power outages as well as hazardous travel throughout the region. 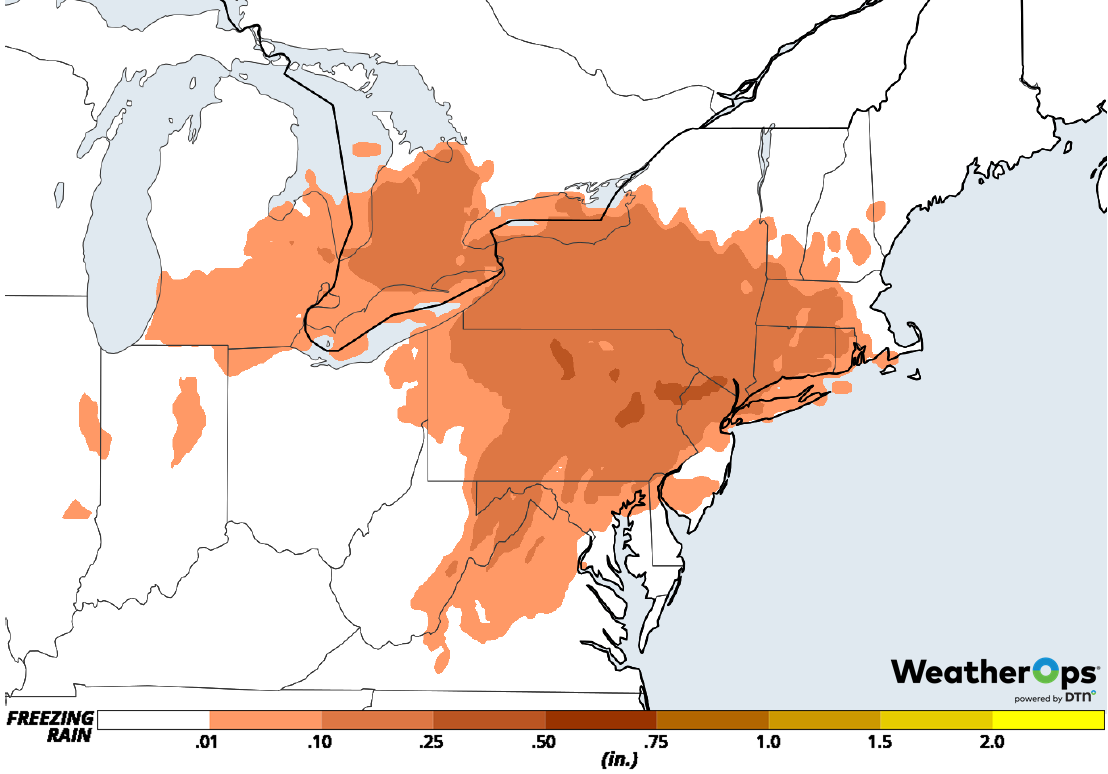 Snow for the Upper Midwest and Great Lakes on Tuesday
Snow from Monday has spread eastward this morning and will expand in coverage as a large upper low over the Midwest region intensifies further. Moderate to heavy snow is forecast across the Upper Midwest into the Great Lakes through early Wednesday morning. Total snowfall amounts of 2-4 inches will blanket much of western Minnesota. With eastward progress expect a substantial increase in snow totals. Eastern Minnesota will likely receive on the order of 3-6 inches of snowfall while areas into Wisconsin and Michigan will likely experience  8-12 inch amounts through early Wednesday. Winds on the backside of the low may gust to over 30 mph in some locals making for reduced visibilities due to blowing snow. Meanwhile, southern Michigan could also see ice accumulations of 0.10-0.25 inches. 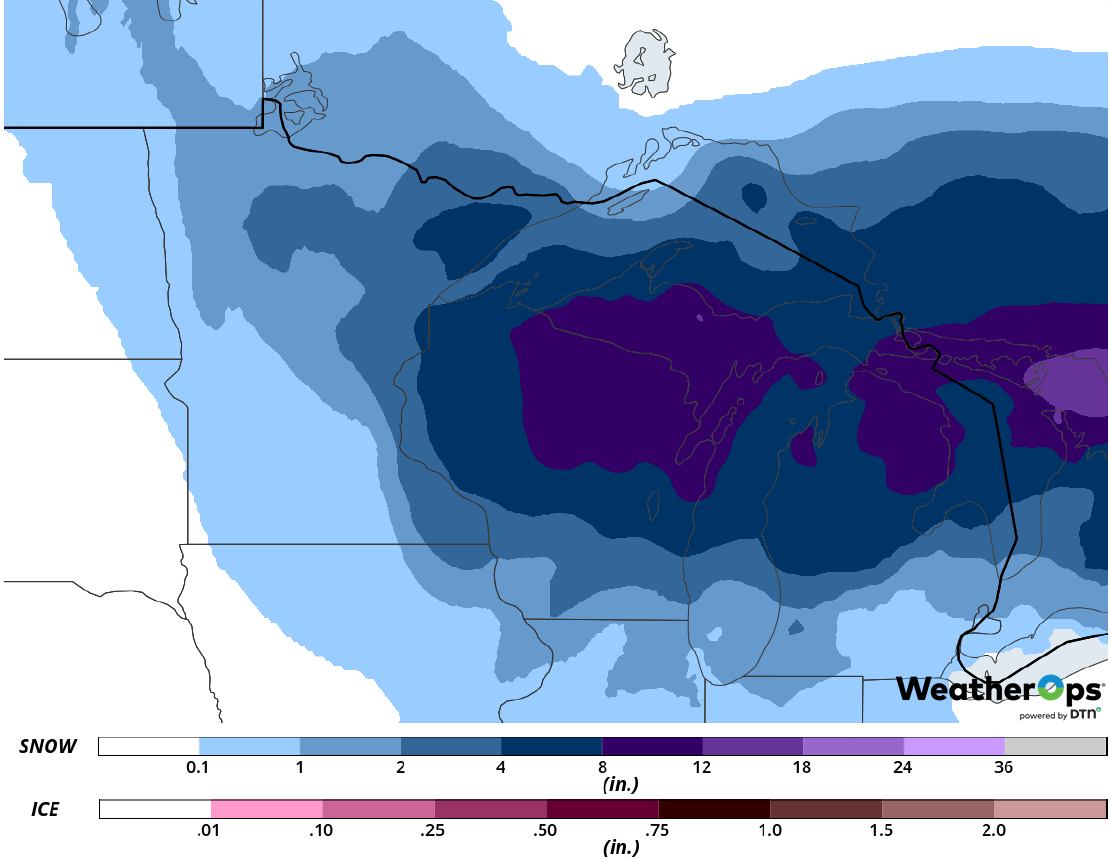 Heavy Snow Tuesday across the Northeast


Heavy snow will also spread across much of the Northeast throughout the day on Tuesday. Areas along and north of the Pennsylvania/New York border into New England will experience widespread snowfall totals in excess of 6 inches with interior locations from Upstate New York into Upper New England expected to receive in excess of 12 inches with locally higher amounts possible. Travel conditions will be hazardous as blowing and drifting snow will create reduced visibilities. Closer to the coast, areas from New Jersey into Massachusetts will see lesser amounts of 2-4 inches with locally higher amounts possible. In addition to snow, some freezing rain is forecast. While most locations will experience negligible amounts, much of Pennsylvania into Lower New England could see 010-0.25 inch of ice. 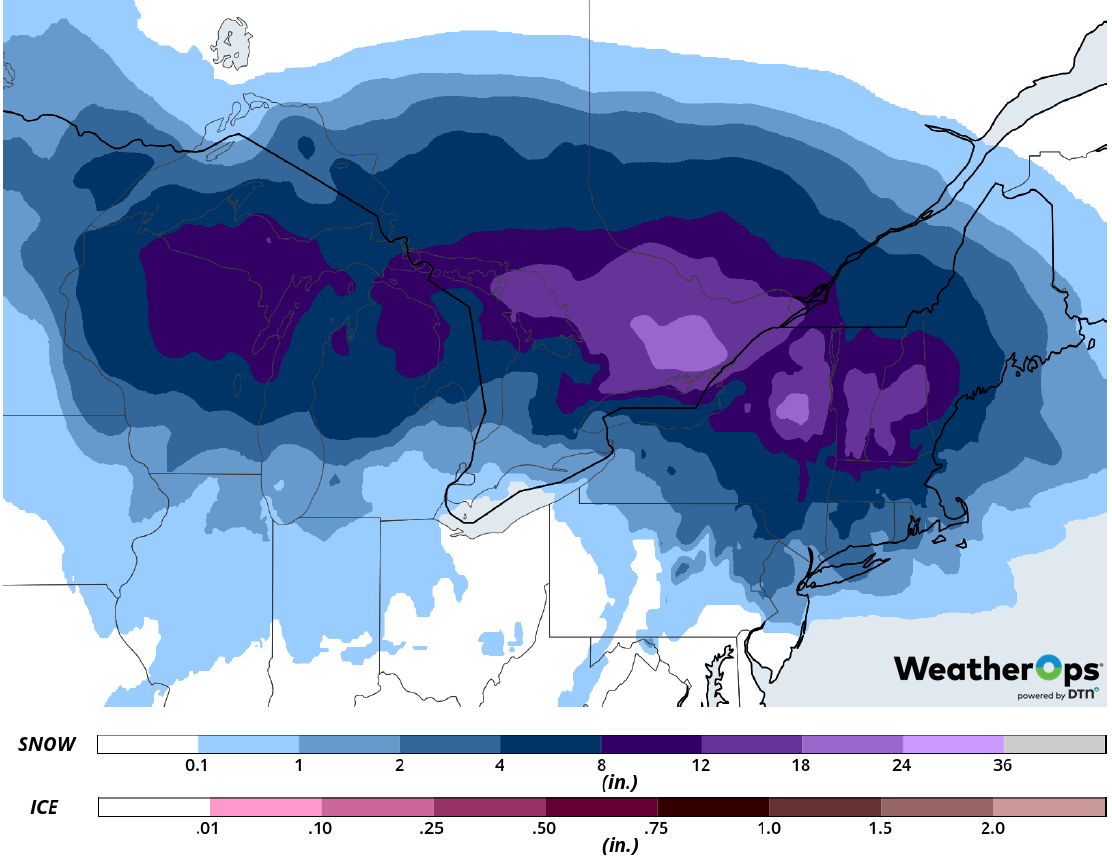 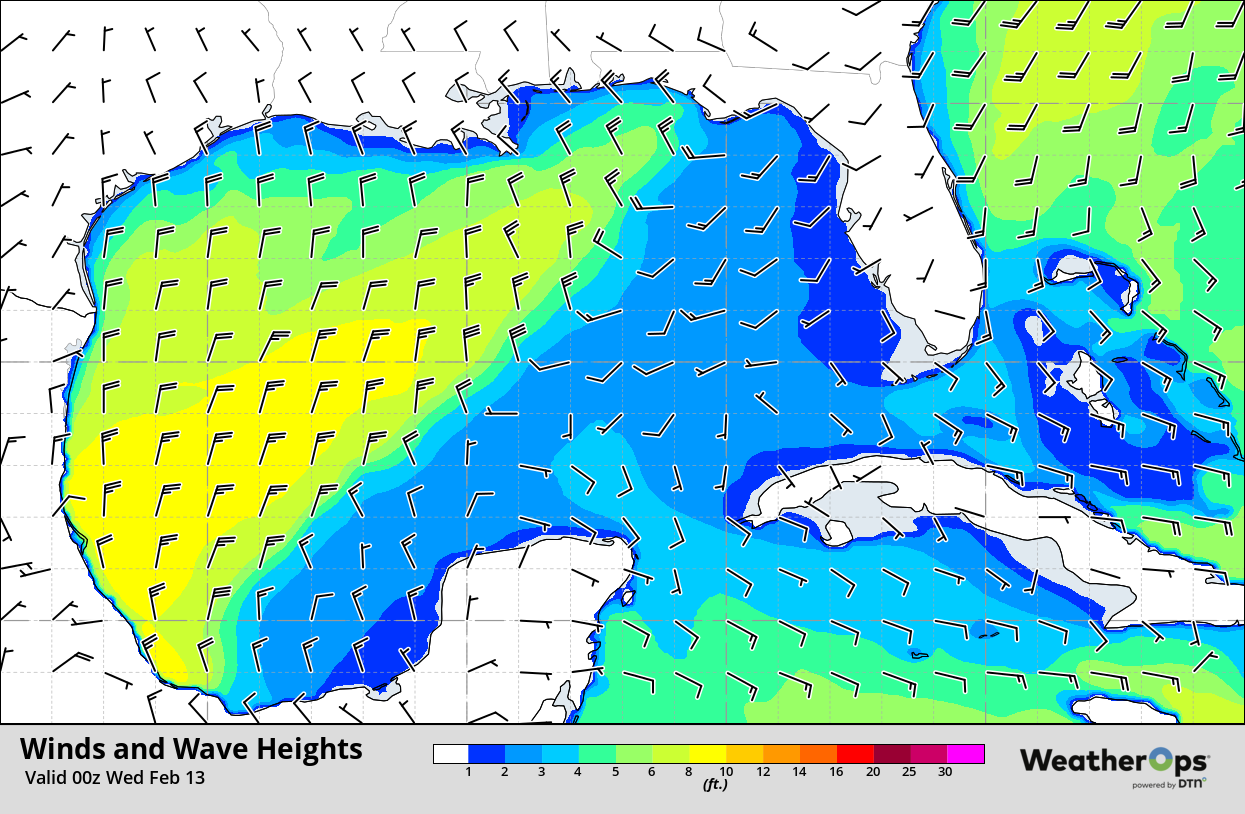 Fog Tuesday along the West Coast of Florida
Areas of dense fog will linger into Tuesday night for coastal areas of West Florida. The fog will  come to an end around midnight. Visibilities will be at or below 2 miles.

Excessive Rainfall for Coastal California on Wednesday
A developing trough of low pressure on Wednesday is forecast to promote numerous showers along the coastal areas of California, from south of Eureka, all the way down to the Los Angeles area. Activity should begin further north and gradually expand southward with time as the trough intensifies. Rainfall accumulations will likely range from 1-2 inches for most locations. Further to the north, higher totals are forecast with potential 3-4 inch accumulations in some locations. A low to moderate threat for excessive rainfall is forecast with a potential for flash flooding to the north, and minor flooding and local runoff to the south. 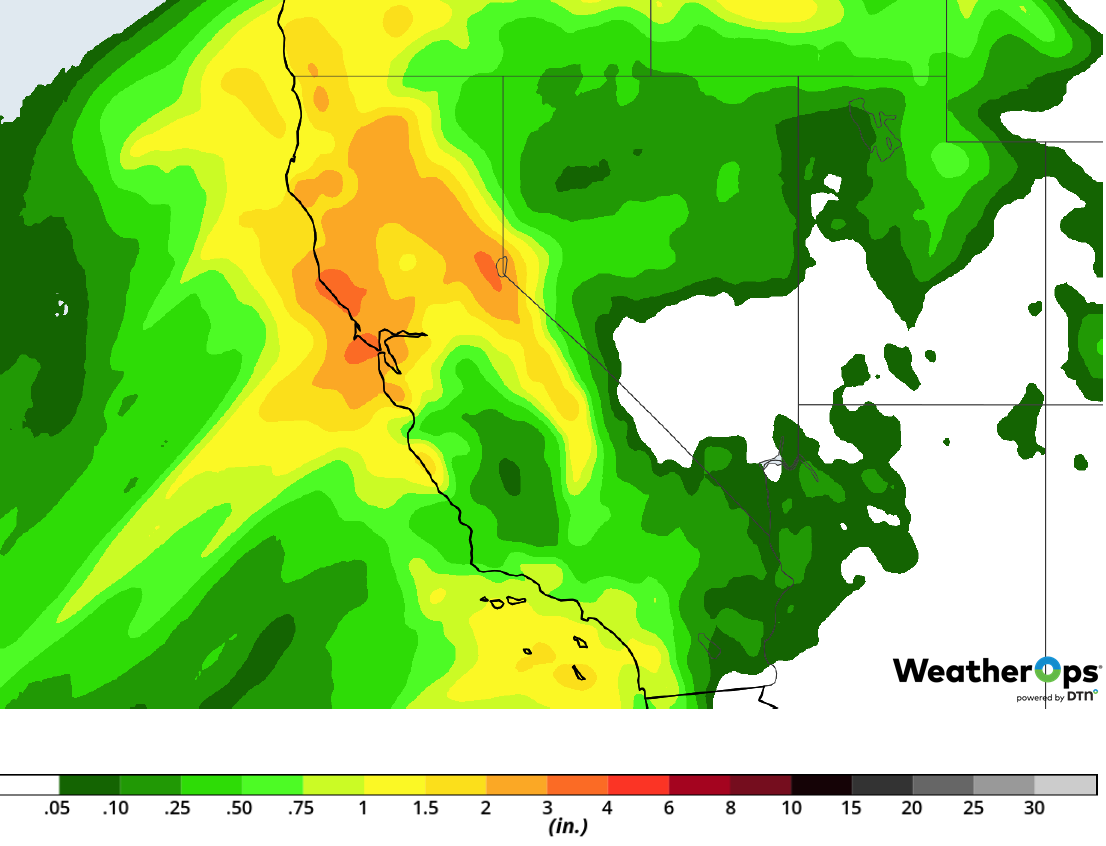 Snow Wednesday and Thursday across the Sierra Nevadas
A brief respite in winter weather will come to an end across the Sierra Nevada on Wednesday with the arrival of the next Pacific low. Increasing snow throughout the day will then persist into the morning hours on Thursday. Another round of 8-12 inches of snow is likely with locally higher amounts closer to 2 feet also possible for the higher peaks. 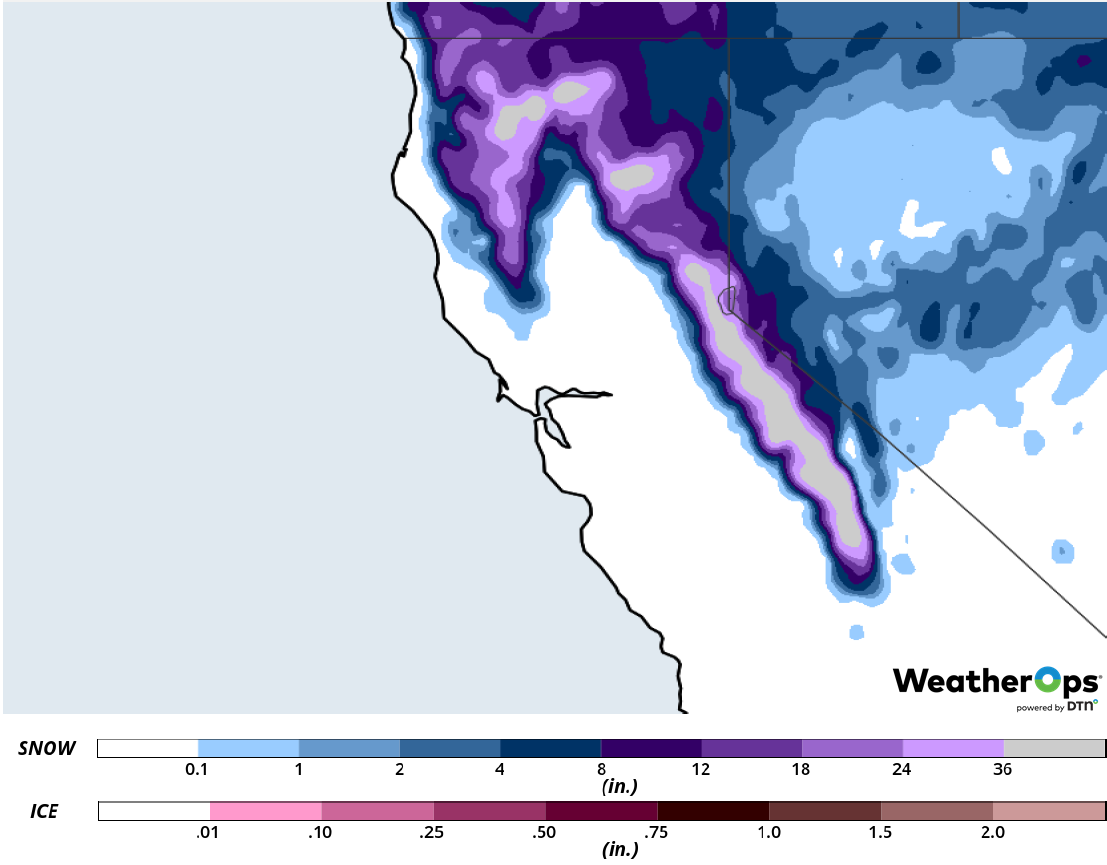 Snow Accumulation for Wednesday and Thursday

Potential for Snow across Maine on Wednesday


Snow is expected over the Northeast early Wednesday morning and will also quickly expand northward. Temperatures and moisture will be more than supportive for significant snow throughout the day. Widespread accumulations will likely range from 8-12 inches with locally higher amounts in excess of 15 inches. Winds gusting in excess of 35 mph will allow for blowing snow and low visibilities.

Major Cities in Region: Portland, ME, Augusta, ME 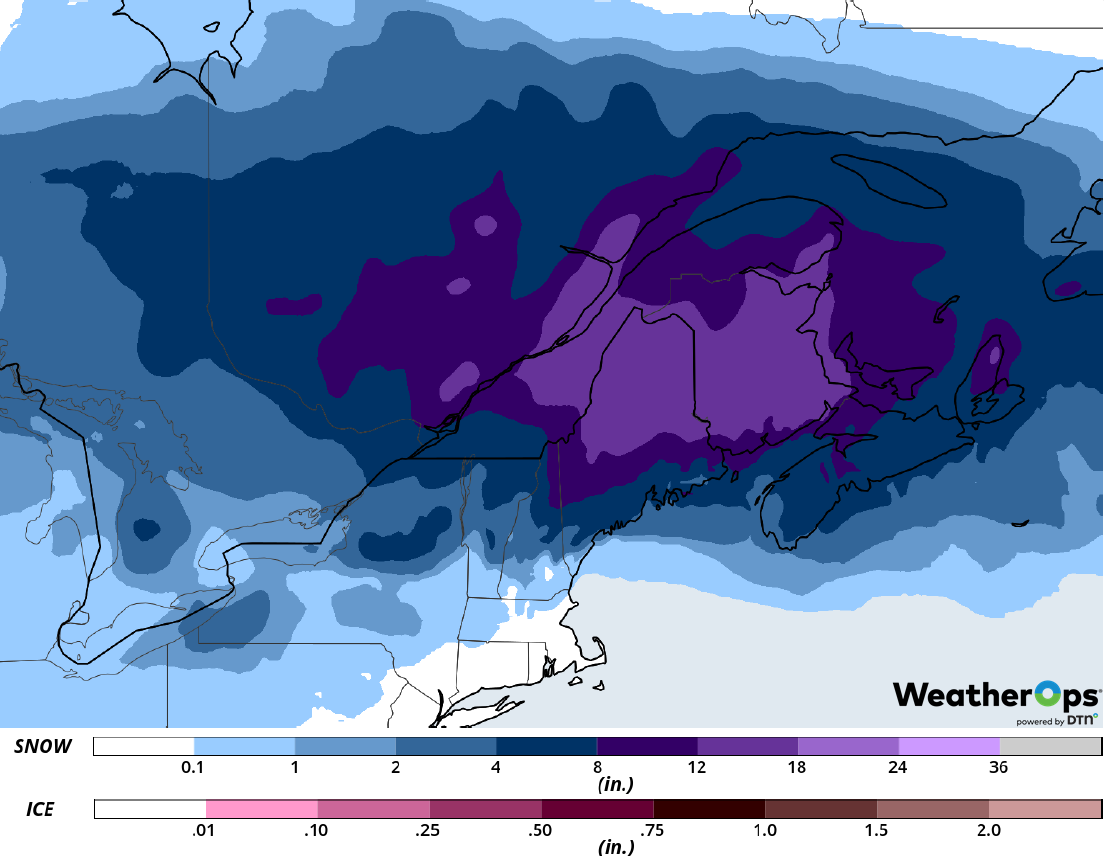 
As a trough of low pressure from Wednesday begins to depart the region on Thursday, a stream of Pacific moisture is forecast to funnel into southern California through much of the day. This will result in another day of fair widespread showers across the region into Thursday night. Rainfall amounts of 1-2 inches will again be possible; however, due to surfaces already saturated from Wednesday, a higher threat for flooding and runoff will exist. 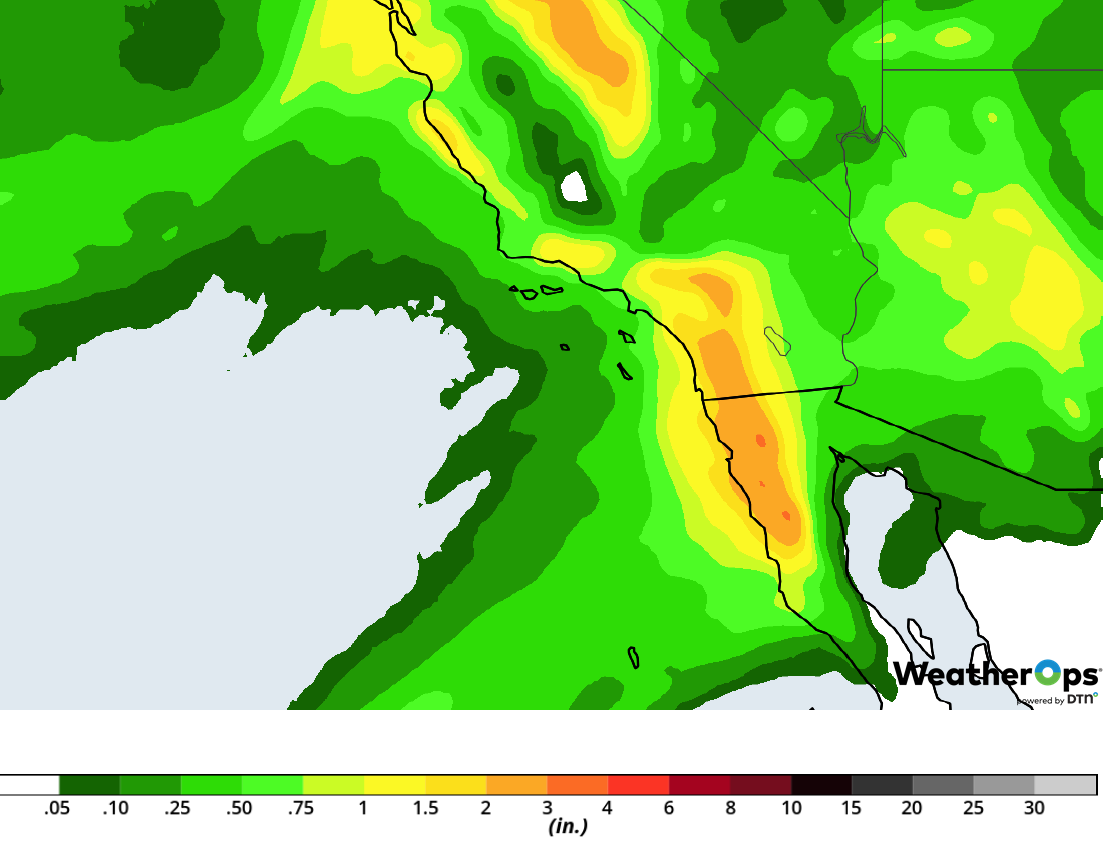 A Look Ahead
Light snow may develop over the Plains on Friday as an area of low pressure moves into the region. On Saturday, freezing rain, sleet and snow is forecast from the Tennessee Valley into the Appalachians. This activity may move into the Mid Atlantic on Sunday. Light snow is forecast Monday across the High Plains.