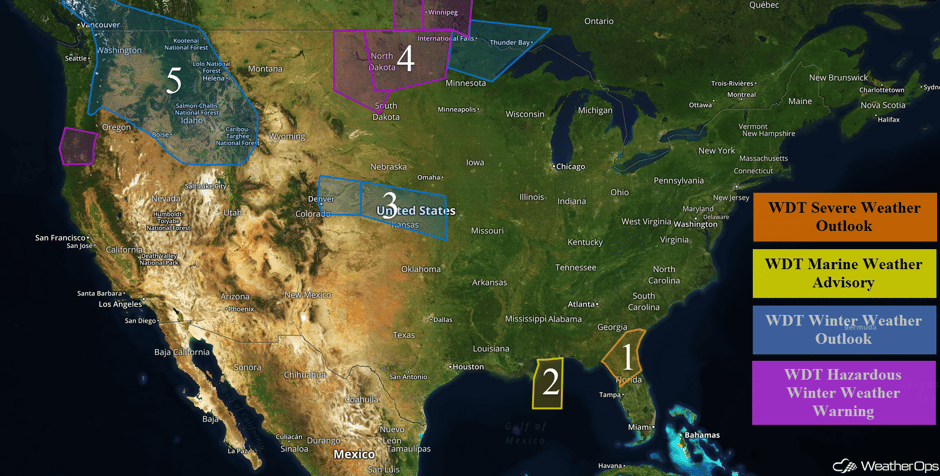 Region 1
An area of low pressure over Alabama and Mississippi will lift through the Southeastern US and toward the Delmarva region today. This low will bring a cold front and a warm front through the Southeast, allowing for the development of showers and thunderstorms, some of which could be severe. Damaging winds and brief tornadoes will be the primary hazards with any storms that develop. 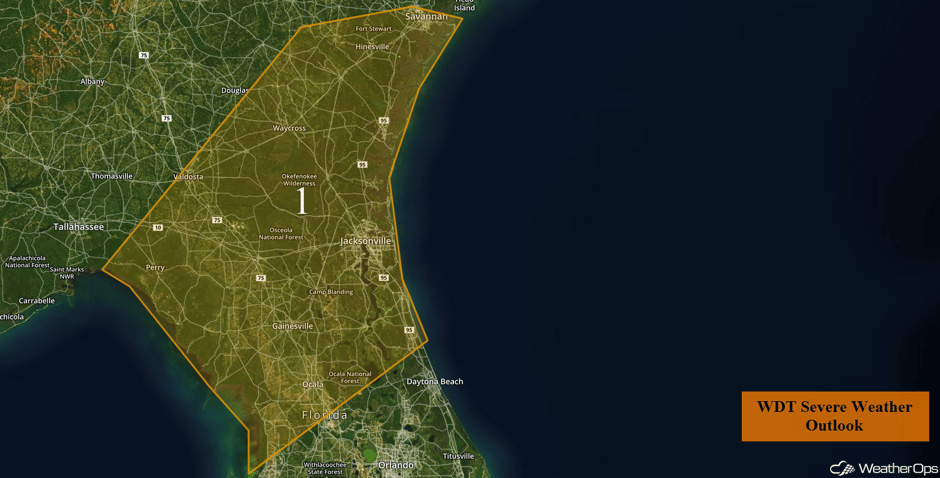 Region 2
Strong southerly winds and scattered thunderstorms are continuing in the wake of a cold front. Winds have become westerly; speeds of 22-28 knots with gusts in excess of 35 knots possible behind the front. Seas will build to 6-8 feet in the wake of the front. Strong westerly winds will then gradually subside during the mid to late morning hours. 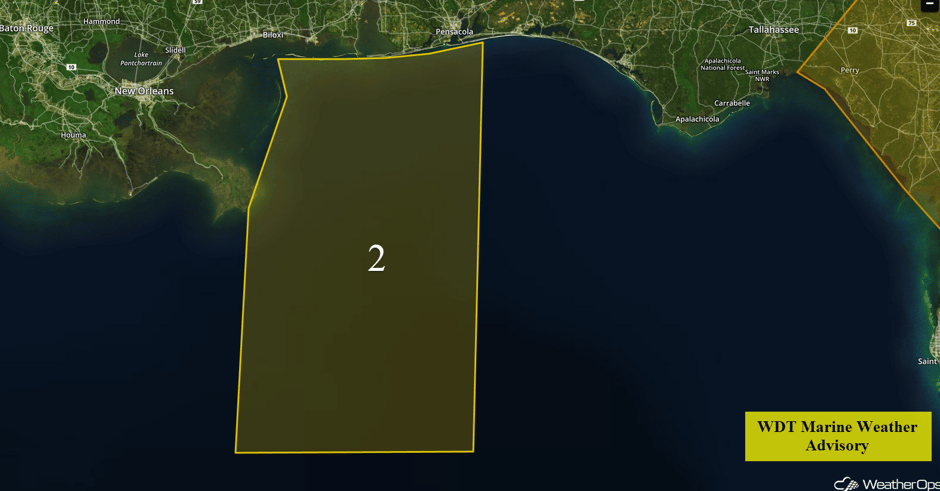 Region 3
A weak trough of low pressure is forecast to move through the Central Rockies later this evening with light snow expected to expand eastward across Region 3 through the overnight hours. Snow accumulations of 1-3  inches, with locally higher amounts in excess of 4 inches, will be possible through Wednesday evening before the snowfall tapers off by Wednesday night. While significant travel impacts are not anticipated, this event will bring a very cold arctic air mass through the region, allowing for low temperatures to drop into the single digits later tonight with wind chills dropping into the negative teens. Winds will be gusty, causing periods of blowing snow and reduced visibilities at times. Across portions of Kansas and Nebraska, snow accumulations of 2-4 inches, with isolated higher amounts in excess of 5 inches, are possible.

Region 4
Snow will continue across Region 4 through Tuesday afternoon, as an area of low pressure continues to move across the Northern Plains. Blizzard conditions will be likely across portions of the Dakotas with snowfall accumulations of 2-4 inches and isolated higher amounts in excess of 6 inches. In addition, winds of 25-35 mph with higher gusts in excess of 45 mph, low visibilities, and wind chills to -25°F will be possible. Further to the east across northern Minnesota, snowfall accumulations of 3-6 inches with locally higher amounts in excess of 8 inches possible. 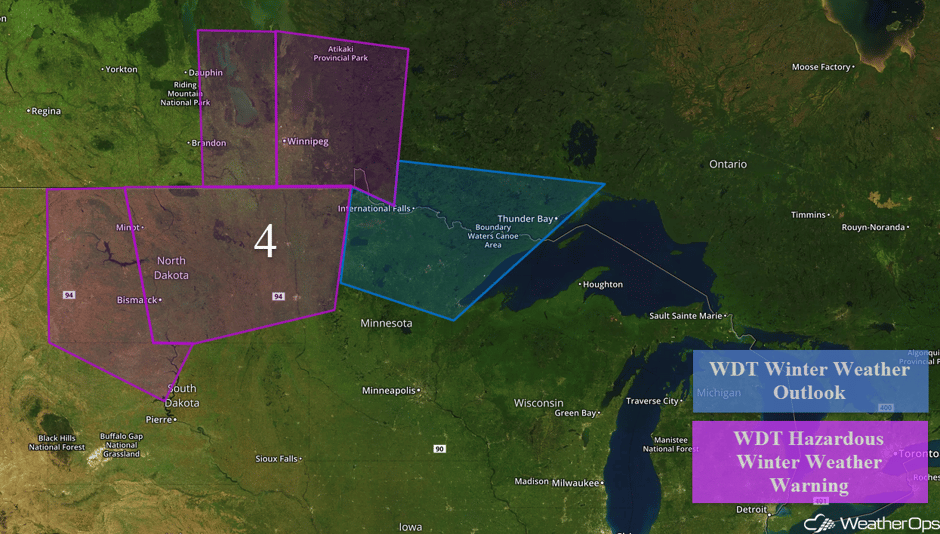 Region 5
A Pacific low is expected to advance into the region on Thursday. Significant cold air in place ahead of this low will allow for widespread accumulating snowfall across Region 5. Several inches of snow are likely, especially in the higher elevations, but there will be a wide variation in snowfall amounts. A second area of low pressure is forecast to bring a continued threat for snow to the region Friday night into Saturday. Regardless of specific snowfall amounts, interests in the region should be prepared for a prolonged period of winter weather from Thursday through Saturday.

Significant Snowfall Possible Thursday across the Northern and Central Rockies
Moderate to heavy snow will likely begin expanding eastward into the Central and Northern Rockies by Thursday with snow accumulations of 4-8 inches possible from Idaho into portions of Nevada and Utah. 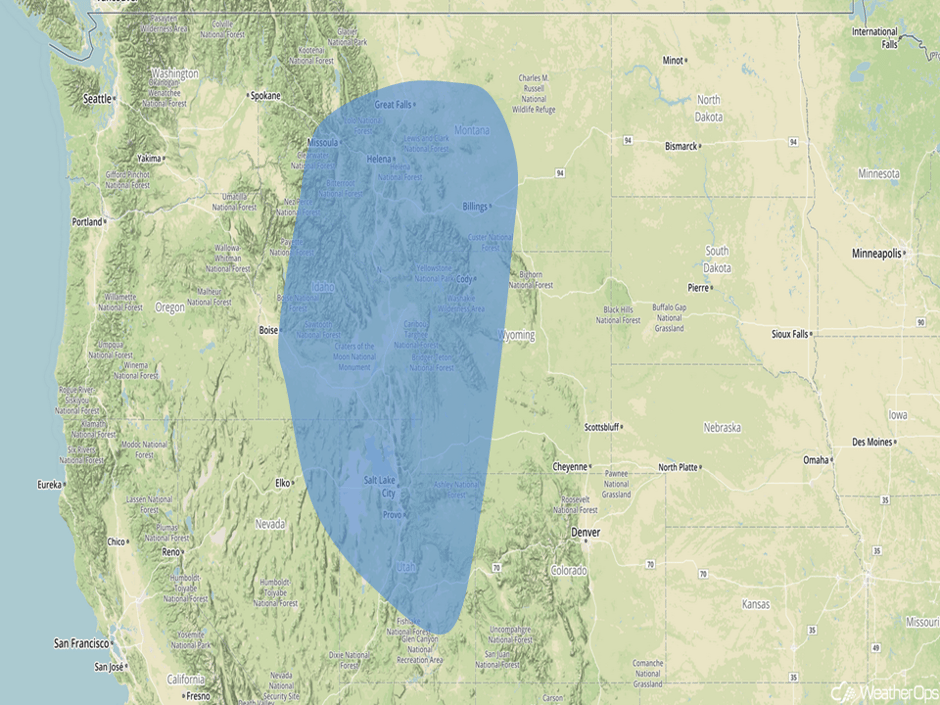 A Look Ahead
Snow will continue across the Cascades on Friday where an additional foot of snow is possible. Further east, an additional 4-8 inches and isolated higher amounts of 12 inches will be possible for the Northern Plains and Upper Midwest. By the weekend, an area of low pressure will bring a potential for snow across the Northern Plains and Upper Midwest.