Thunderstorms Tuesday for Portions of the Southeast
Showers and thunderstorms associated with a cold front moving southeastward are ongoing from Nashville, TN to Alexandria, LA. Low to moderate instability is available ahead of the cold front due to increasing moisture. There is also the presence of adequate wind shear for organized thunderstorms. While widespread severe weather is unlikely, a few of the stronger storms will be capable of producing damaging winds. An isolated tornado cannot be ruled out. The severe weather threat will end as the cold front passes, but a few showers may linger for the remainder of the evening. 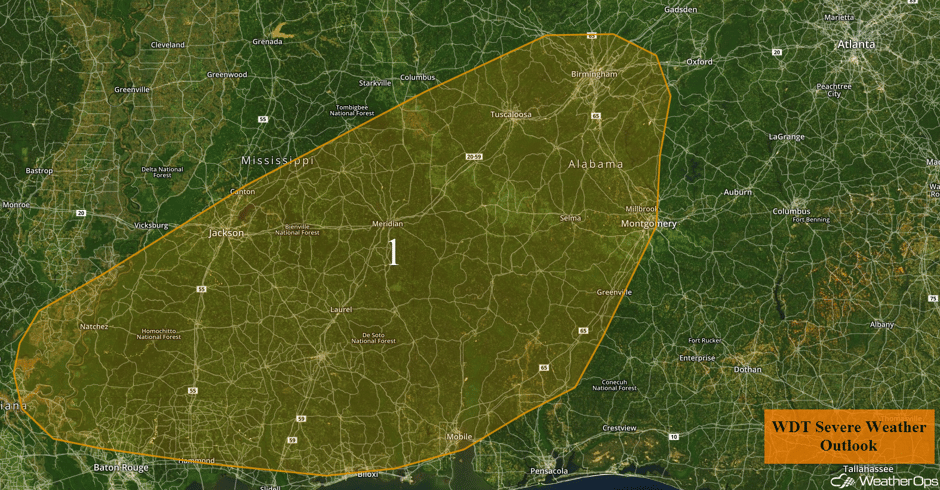 Elevated Winds and Seas through Friday Morning for Portions of the Gulf of Mexico
A strong cold front should be moving off the Texas coast late Tuesday afternoon and is forecast to move quickly to the southeast during the evening. Winds should be southerly to southeasterly ahead of the front and are forecast to shift to the north or northeast at 25-30 knots with gusts in excess of 50 knots as the front passes. As the winds increase, seas will increase as well. Wave heights of 6-9 feet are expected near the shore and 10-14 feet in deeper waters. These conditions should persist through Friday morning before slowly decreasing from the northwest to southeast throughout the day.

Lake Effect Snow for Western New York Wednesday and Thursday
Scattered showers in association with a slow moving cold front are ongoing, The front is expected to push through the region by this afternoon. Conditions appear favorable for enhanced lake effect snow bands to develop late tonight and early Wednesday morning with the potential for continued lake effect snow through late morning or midday Friday. Snowfall may temporarily diminish during the day on Wednesday before another return of low to mid level moisture allows for potentially higher snow rates beginning Wednesday evening and Thursday. There may be a sharp cutoff between little accumulation and significant accumulations. With that said, an intense lake effect snow band is likely to develop in a southwest to northeast fashion. Hourly snow rates could be several inches and visibility less than 1/4 mile at times at times while wind gusts occasionally exceed 35-40 mph. Snow accumulations of 10-16 inches with locally higher amounts in excess of 18 inches are forecast.

Snow Wednesday into Thursday for Portions of New Mexico and Texas
Light showers and some light snow are ongoing across southeast Arizona and southern New Mexico. Precipitation may decrease in coverage later this afternoon and evening. However, an upper level disturbance will approach the region early Wednesday morning, drawing moisture north of a stalled front over northern Mexico. Moderate shower activity will intensify with increasing potential for a wintry mix. Snowfall amounts of 1-3 inches are expected in the lower elevations with 3-5 inches forecast in the higher elevations. Across portions of western Texas, snow accumulations of 1-2 inches are forecast. In addition to the snow, some light ice accumulation is also possible. Travel conditions may become hazardous Wednesday into Thursday. Drier air set to arrive from the north should limit precipitation by midday Thursday.

A Look Ahead
Light snow may develop across the Upper Mississippi Valley and Northern Plains on Friday as a cold front pushes through the region. As the front continues to push eastward into the Appalachians and Mid Atlantic on Saturday, light snow is forecast from Pennsylvania into the Tennessee Valley. Early next week, a series of areas of low pressure may produce light snow from the Northern Plains into the Northeast.