A stationary front will be the focal point for the development of thunderstorms across portions of the Northern Plains on Tuesday. Tropical Depression Nine is expected to gradually strengthen over the next few days while curving northwestward, bringing heavy rain and thunderstorms to portions of Florida. Tropical Depression Eight is forecast to strengthen into a Tropical Storm later on Tuesday. 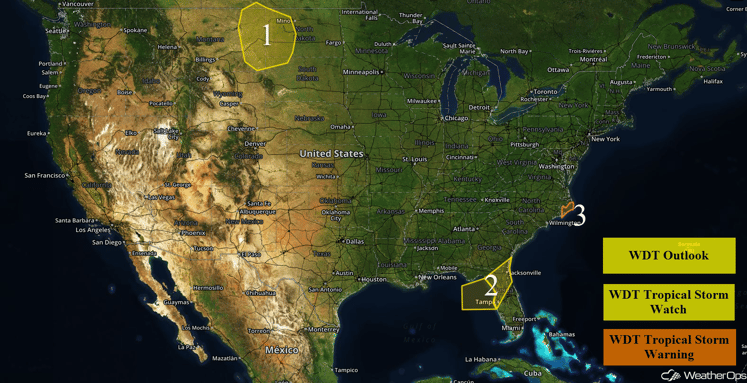 There will be the potential for strong to severe thunderstorms occurring today near and along a frontal boundary lying across the region. Although moisture is limited, there may be enough instability for the development of isolated storms in the late afternoon and continuing into the evening hours. The primary hazards with any storms that develop will be large hail and damaging winds. 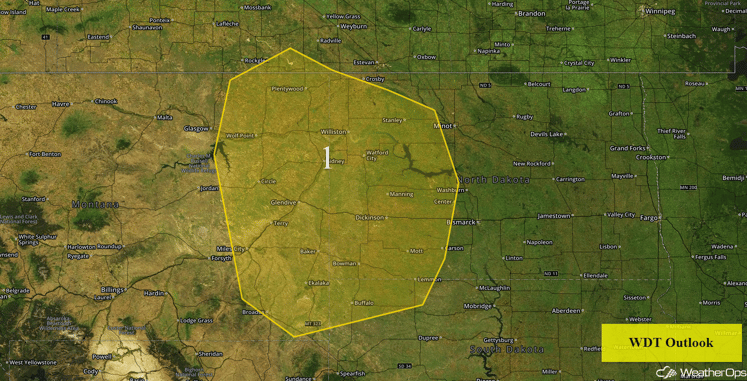 Tropical Depression Nine is forecast to gradually strengthen over the next few days while curving northeastward. The latest forecast track has it making landfall in northwest Florida over the latter half of Thursday. It is then forecast to track northeastward through early Friday before moving into the Atlantic Ocean. Across portions of Central and Northern Florida and far southeastern Georgia, tropical storm conditions will be possible, including heavy rains, gusty winds, and a moderate tornado threat within some of the stronger thunderstorm squalls. 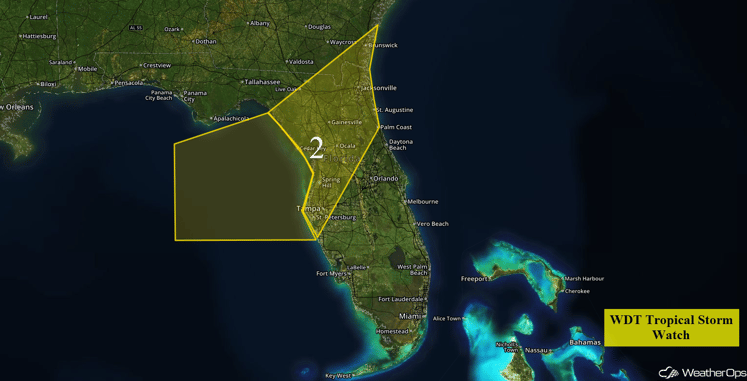 Tropical Depression Eight is forecast to strengthen into a Tropical Storm later this afternoon or early evening as it nears the North Carolina coastline. Currently this system is moving west-northwestward however, a turn to the northeast this afternoon is expected as a system interacts with a trough moving off the east coast as it passes close to the Outer Banks. With the close approach, tropical storm force winds, locally heavy rainfall, and hazardous beach conditions may develop later this morning into Wednesday morning. 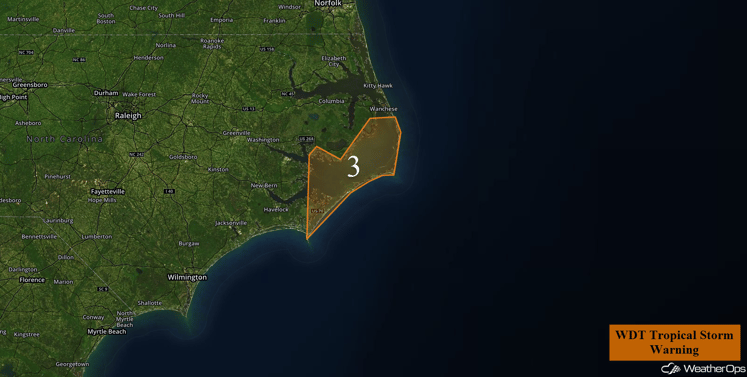 Deep moisture associated with Tropical Depression Nine will continue to spread across the Florida Peninsula today, bringing periods of showers and thunderstorms and a continued threat for excessive rainfall to many locations. Two day rainfall amounts of 4-6 inches with locally higher amounts in excess of 8 inches will be possible. 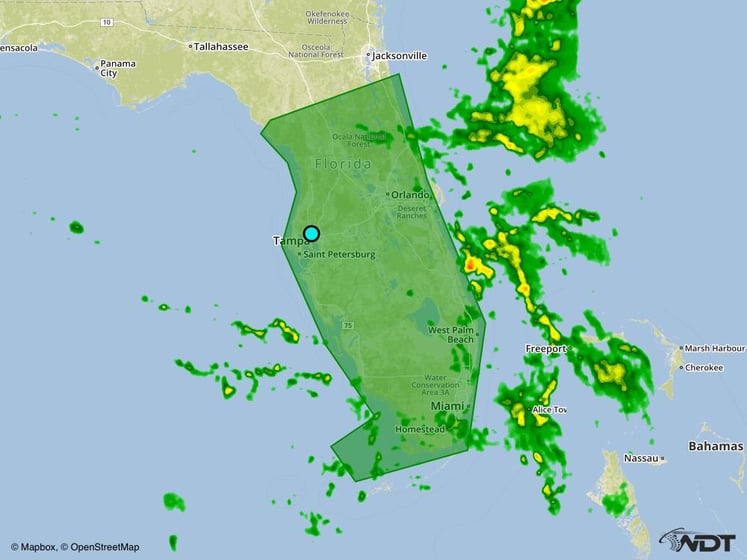 Deep moisture associated with the Southwest monsoon will spread northward across the Central and Southern Plains and into the southwestern Great Lakes region today. A stationary front will provide a focus for thunderstorm development, and a cold front moving southward out of the northern US may also induce rain activity. Some areas of excessive rainfall may develop with accumulations of 1-2 inches, locally higher amounts in excess of 3 inches, will be possible. 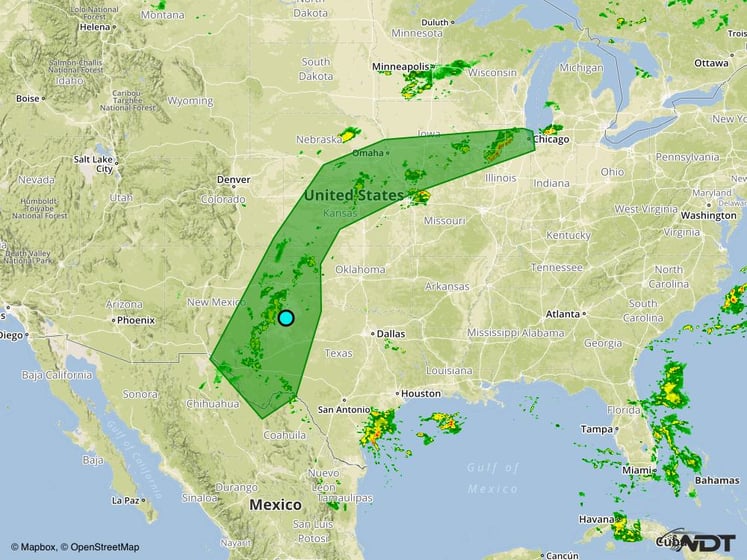 Excessive Rainfall Possible along the Texas Coast on Tuesday

A weak disturbance moving westward onto the Texas coast will likely generate periods of showers and thunderstorms throughout the day. With deep moisture in place, a few areas of excessive rainfall may develop. General rainfall accumulations of 1-2 inches, with locally higher amounts in excess of 3 inches, will be possible.

Strong to Severe Thunderstorms Possible across the Southeast on Thursday

Tropical Depression Nine is forecast to intensify into a tropical storm over the next few days, then make landfall in northwest Florida on Thursday. Based on the current forecast track, there will be the potential for associated strong to severe thunderstorms across much of northern Florida and far southern Georgia on Thursday and into the early morning hours on Friday. The primary hazards will be gusty winds and tornadoes. In addition to the severe weather threat, widespread heavy rainfall will be possible. Rainfall amounts of 2-4 inches, with locally heavier amounts in excess of 5 inches, are expected for many locations and could lead to an increased threat of flooding across the region. 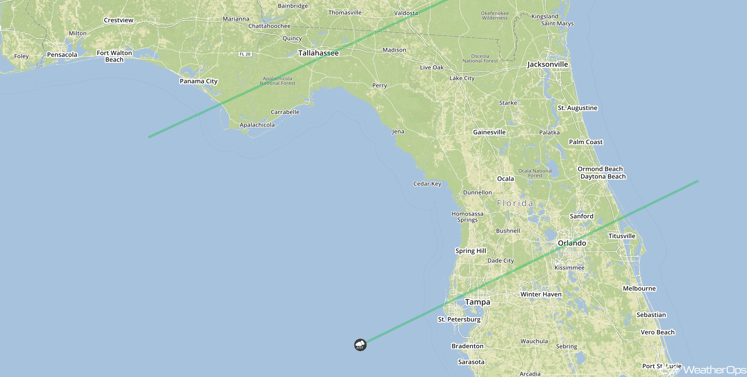 Hurricane Gaston (red oval) is continuing to move east-northeastward with an increase in forward speed expected over the next few days. Maximum sustained winds of 105 mph with higher gusts will be possible.

A weak area of low pressure (green oval) is located near the Cabo Verde Islands. Environmental conditions are expected to become more favorable for further development late this week as it moves westward, 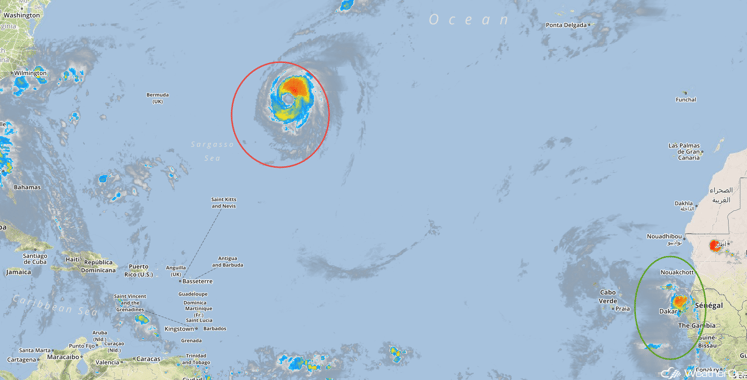 Tropical Depression Nine is forecast to move offshore the coastal Carolinas on Friday, bringing heavy rain to portions of the area. Rainfall amounts of 1-3 inches, with locally higher amounts in excess of 4 inches, will be possible. There will be the potential for thunderstorms across portions of the Plains and Midwest by early next week.