Severe thunderstorms are likely for portions of the Plains on Tuesday as a shortwave trough pushes through the region. Across the Southeast, thunderstorms are expected as a warm front moves northward. Thunderstorms will continue across portions of central Florida through early afternoon. Snow will continue for the Colorado Rockies as an upper level system moves across the region. An area of low pressure moving through the Northeast will bring wintry precipitation to the region through early Wednesday.

Region 1
A shortwave trough will push across Oklahoma and Missouri this afternoon and evening. This should result in developing shower and thunderstorm activity in the afternoon. Development will be over West-Central and Central Oklahoma initially, but is expected to expand eastward into Southwest Missouri and Northwest Arkansas through the evening hours. Main hazards will be limited to severe wind, although an elevated threat for large hail should accompany storms moving across Northeast and Southwest Missouri during the evening hours. A tornado threat should be precluded by limited moisture and instability, with high based thunderstorms posing only a low threat of an isolated tornado or two. After dark, activity should transition into a weak line of storms that move across much of Southern Missouri with a threat for severe winds. In addition, thunderstorms may produce heavy to excessive rainfall for portions of Kansas and Missouri. Rainfall amounts of 1-2 inches with isolated higher amounts in excess of 3 inches may lead to flash flooding. 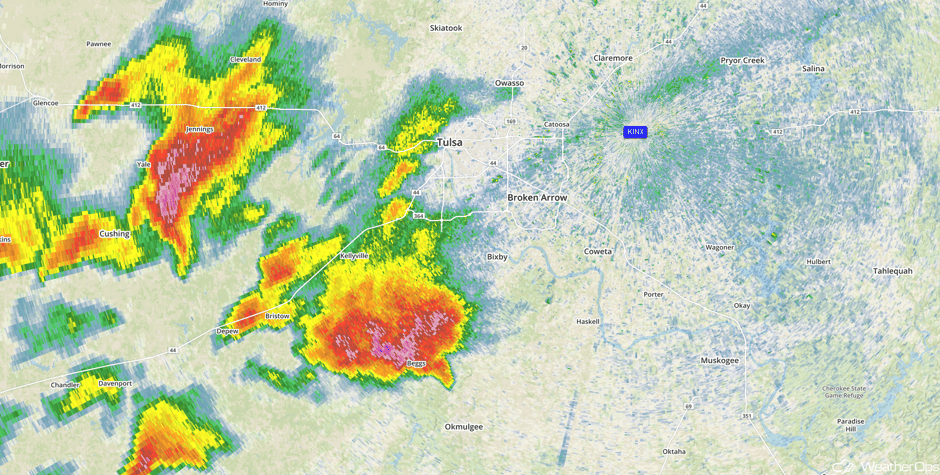 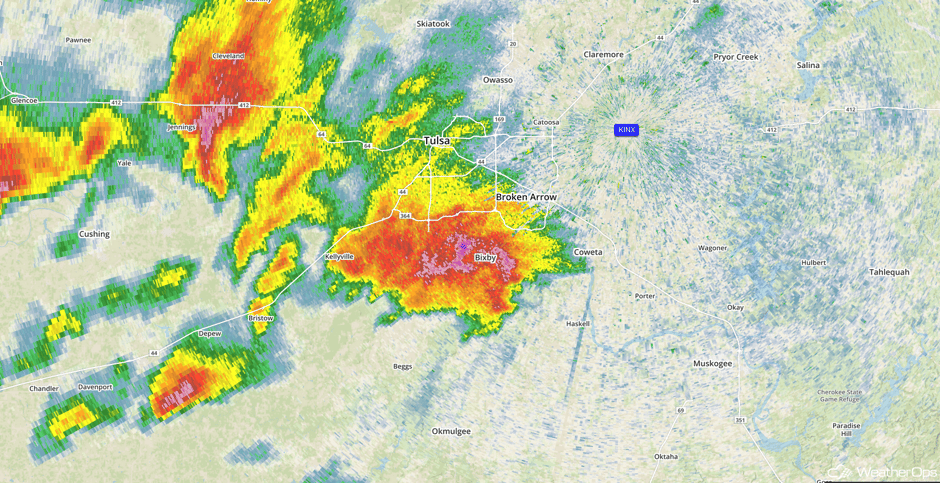 Hail fog behind lowered base of severe storm as it moved through Broken Arrow, OK! #okwx pic.twitter.com/NybxgJWMUl 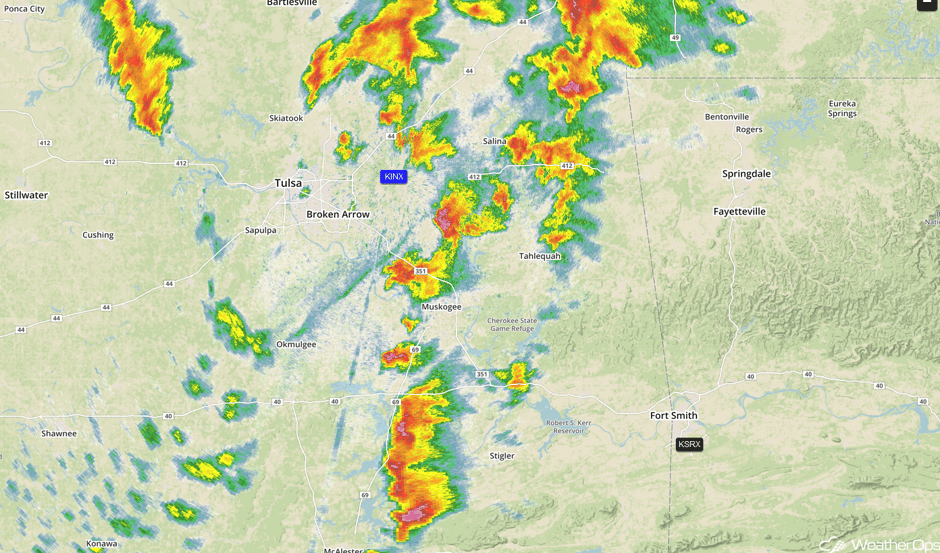 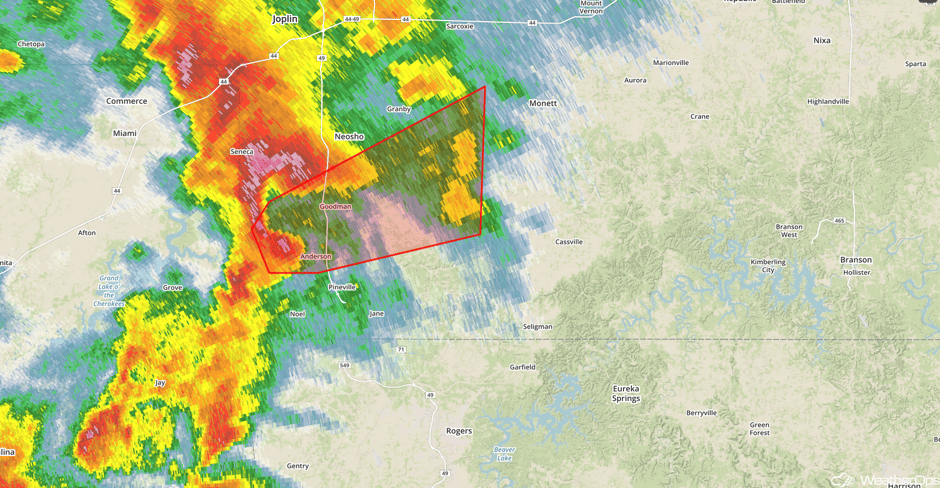 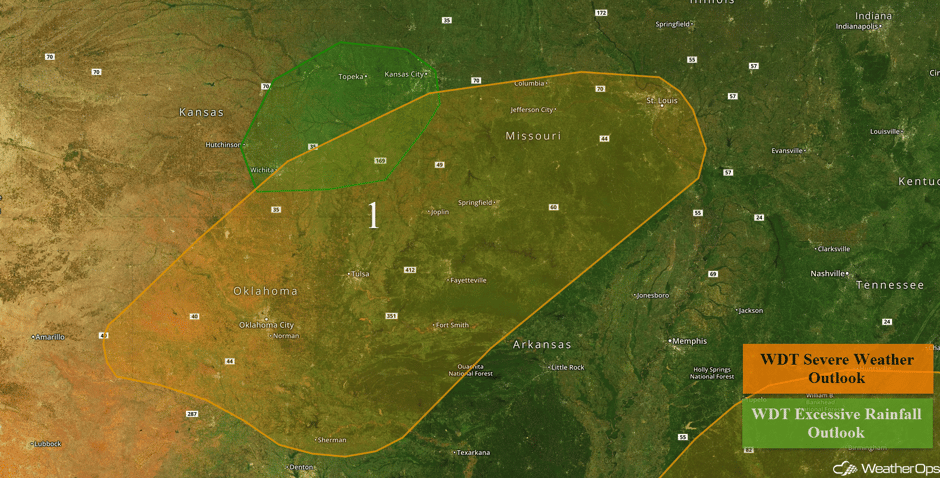 Region 2
The threat for severe weather will remain mostly inhibited on Tuesday and early Tuesday night. However, during the early morning hours on Wednesday, shower and thunderstorm development is expected with the return of deep moisture to the region. Conditions will become supportive for thunderstorms capable of severe wind and possibly tornadoes as a warm front lifts northward between midnight and 7AM EDT Wednesday. The greatest likelihood for rotating thunderstorms should exist across far southern Mississippi/Alabama and immediately surrounding areas. 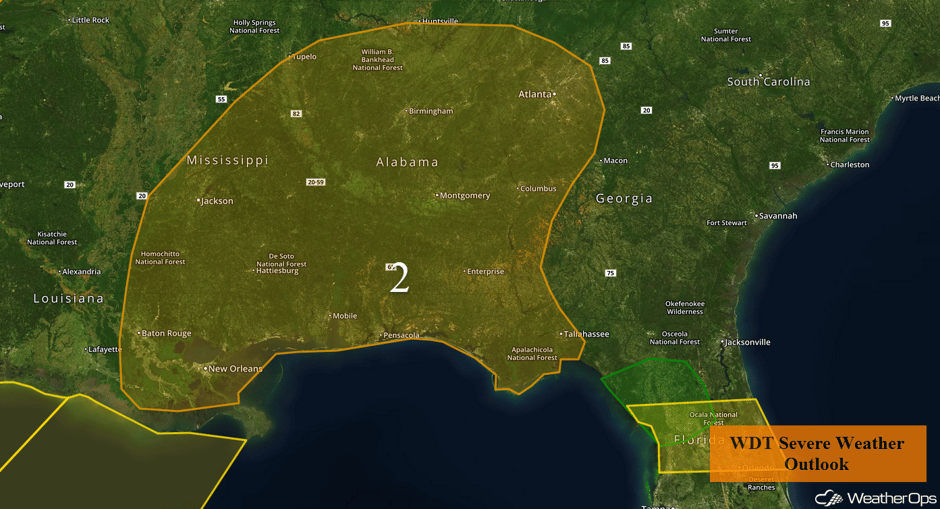 Region 3
A strong line of thunderstorms will continue to move across Central Florida through the early afternoon. Most activity has been non severe, but a few storms may produce wind gusts in excess of 50 mph, hail, and frequent lightning. In addition, heavy rainfall amounts of 1-3 inches with locally higher amounts in excess of 4 inches will be possible. 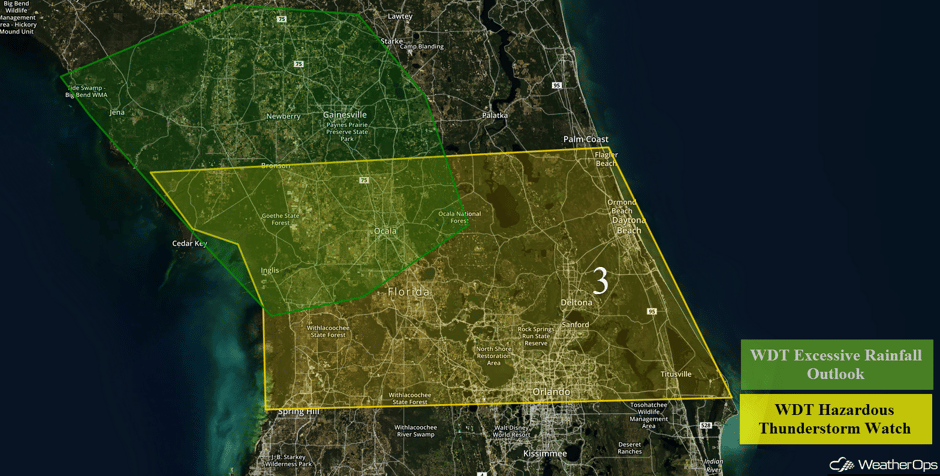 Region 4
A strengthening upper-level disturbance will move across the southwestern US early this week, and should promote the development of a surface low over the southern Rockies. As this low develops and moves into the Great Plains, precipitation on its west side will interact with cold air moving southward out of Canada and bring a round of snow to the area starting Monday evening. Snow is forecast to continue through Tuesday afternoon before gradually tapering off during the evening. Snow accumulations of 6-10 inches, locally 12+, are forecast for many locations. Breezy winds of 10-20 mph may produce some areas of blowing snow and reduced visibilities.

Cry not for Boulder, it'll be 72F/22C on Friday. pic.twitter.com/sXc6bBkuJ0

Severe Thunderstorms Expected Wednesday for Southeast and Ohio Valley
As a fairly potent surface low pressure tracks northeastwards towards the Ohio River Valley its associated cold front will continue to track eastwards across the Southern US and Gulf of Mexico. By the morning hours, strong southerly flow out ahead of this front will result in ample instability across much of the Gulf States northwards into the Southeast. This combined with increasing wind shear will result in fairly vigorous morning thunderstorm activity out ahead of the front and this thunderstorm activity is only forecast to strengthen as daytime heating increases. These thunderstorms are then forecast to track eastwards and continue to increase in coverage as the day continues with a mix of supercells and linear thunderstorms forming during the morning hours. All thunderstorm activity will then transition into a line of strong to severe thunderstorms as the afternoon progresses. Large hail, damaging winds, and tornadoes will all be possible with this activity. Later into the early evening hours, the primary hazards will transition to large hail and damaging winds as thunderstorm activity becomes linear. In addition to this thunderstorm activity across the Southeast, heavy rainfall will also be possible across the region with general rainfall amounts of 1-2 inches with locally higher amounts in excess of 3 inches. 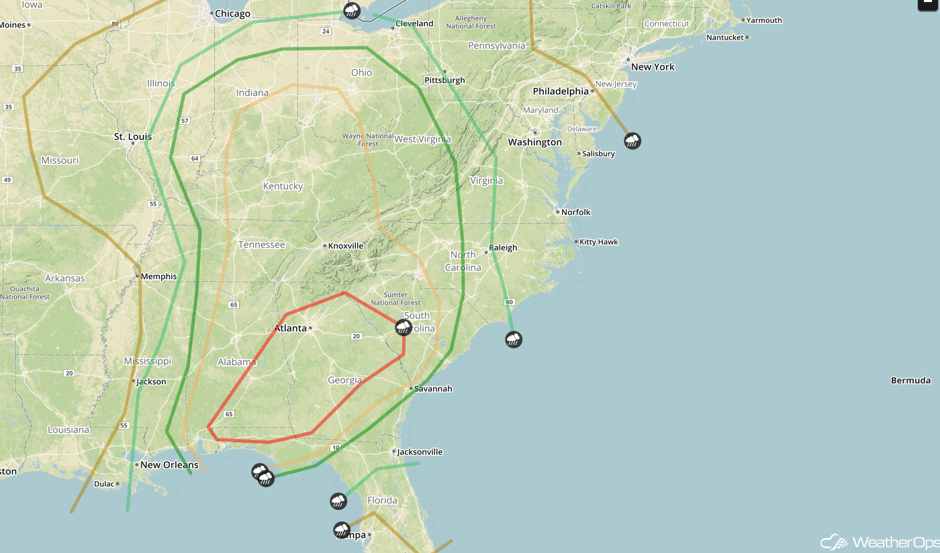 Significant Snowfall Possible for Wednesday across Michigan
As a strengthening low pressure system tracks towards the Ohio River Valley, moisture will continue to spread northwards towards the Great Lakes. With high pressure in Canada, northerly winds will bring cold air south into Michigan. With this cold air in place, moderate to possibly heavy snowfall will begin to overspread Michigan during the overnight hours on Wednesday. Although there is still a fair amount of uncertainty with regards to specific amounts and timing of the snowfall, it appears likely that several inches of snowfall will be possible across Michigan during the overnight hours Wednesday into the early morning hours on Thursday. 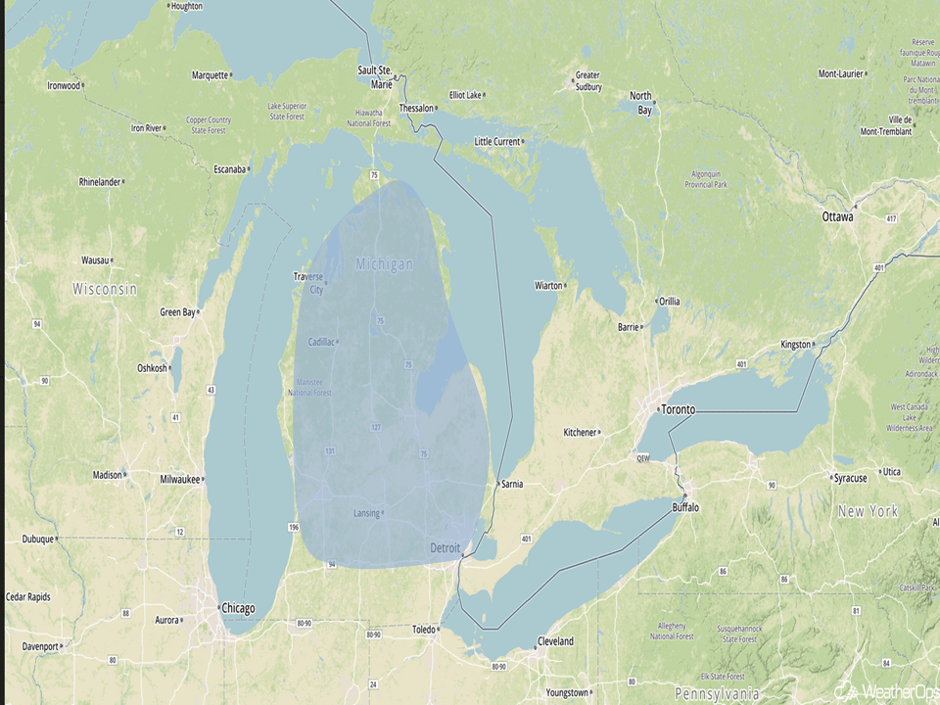 Strong to Severe Thunderstorms Possible for the Mid Atlantic on Thursday
Early morning thunderstorm activity will continue to track eastwards just out ahead of a cold front across the Mid-Atlantic during the morning and early afternoon hours on Thursday. Although there will be limited instability, strong wind shear and ample forcing along this cold front will continue to maintain a line of strong to severe thunderstorms that will track eastwards until they move offshore Thursday afternoon. Damaging wind gusts and large hail will be the primary hazard with any thunderstorm, however, an isolated tornado or two will also be possible as well. In addition to these strong thunderstorms heavy rainfall will also be possible, with 1-2 inches locally 3+ possible especially within some of the heavier thunderstorms. 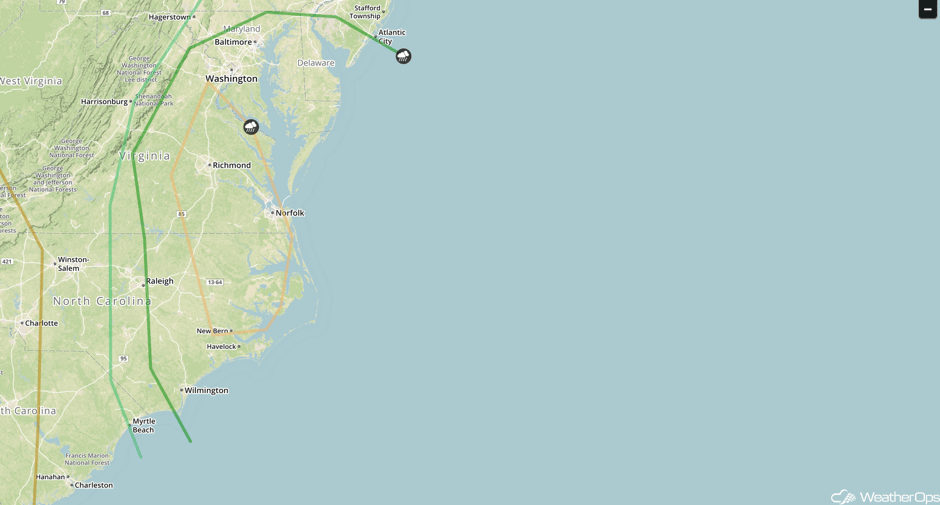 A Look Ahead
As an area of low pressure continues to slowly track eastward on Friday, its associated cold front will also continue eastward. Out ahead of the cold front ample moisture will be brought northward and with the front providing ample lift, moderate to heavy rain will overspread California. General rainfall amounts of 2-4 inches with locally higher amounts in excess of 5 inches are expected. This will result in some localized flooding and excessive runoff over the region.