Heavy to excessive rainfall will continue across portions of Southwest Texas ahead of a cold front.

Excessive Rainfall Continuing for Southwest Texas on Thursday
A frontal boundary will be pushing off the east coast today, extending southwestward toward the Gulf Coast into west Texas near the Big Bend area. The front will remain nearly stationary and therefore any ongoing shower and thunderstorm activity will not move much throughout the day. Rainfall amounts of 1-2 inches with locally higher amounts in excess of 3 inches are forecast. Given recent heavy rainfall that has occurred over the past few days, widespread flooding will remain a concern.

714am - An off-duty forecaster sent us this photo from Canutillo this morning. #ElPaso #TXwx #flooding pic.twitter.com/Rku16moWgf

Tropical Update
Tropical Storm Maria (green oval) is 275 miles east-northeast of Cape Hatteras, North Carolina and is moving east-northeastward at 8 mph. Maria is expected to turn toward the east and increase in forward speed through tonight before turning east-northeastward on Friday with an additional increase in forward speed. On the forecast track, Maria will move away from the East Coast and pass well to the south of Atlantic Canada during the next couple of days. Maximum sustained winds have decreased to near 70 mph. Little change in strength is forecast during the next couple of days.

Hurricane Lee (red oval) is moving toward the north at 9 mph and is 445 miles east of Bermuda. A faster motion toward the north-northeast or northeast is expected to begin later today. Maximum sustained winds are at 110 mph with higher gusts. Gradual weakening is forecast during the next 48 hours.

A large area of cloudiness and showers (blue oval) extending from the northwestern Caribbean Sea across Cuba to the Bahamas is associated with a broad area of low pressure interacting with an upper level low. A weak area of low pressure is likely to form while it moves northward across Cuba and near the east coast of the Florida Peninsula over the next few days. Environmental conditions appear conducive for development before upper level winds become less favorable early next week. Regardless of development, this system is likely to produce locally heavy rainfall over portions of Cuba, southern Florida, the Florida Keys, and the Bahamas during the next several days. 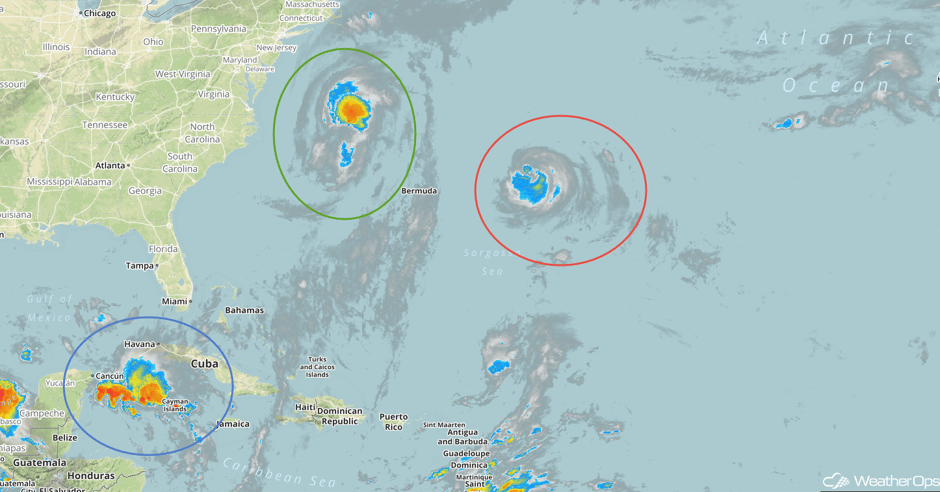