Catastrophic flooding is expected through Wednesday across North Carolina and into the Mid Atlantic as Hurricane Florence moves inland. In addition, isolated tornadoes are expected as Florence makes landfall. Tropical storm conditions are expected across the northwestern Gulf of Mexico Thursday afternoon through early Friday evening as a tropical wave approaches the Texas coast.

Excessive Rainfall through Saturday for  North Carolina and the Mid Atlantic
The initial heavy bands of Florence are beginning to impact coastal North Carolina. Despite differences within forecast track guidance, models remain in agreement with extreme rainfall totals over much of central and northeast South Carolina, southwest and western North Carolina, and surrounding locations. Over the next several days, rainfall totals as high as 30-35 inches are forecast. The highest rainfall rates will shift farther inland over the course of the weekend and early next week. Further inland, widespread rainfall amounts of 6-10 and locally higher amounts are expected. Excessive rainfall may extend across far western North Carolina and Virginia. 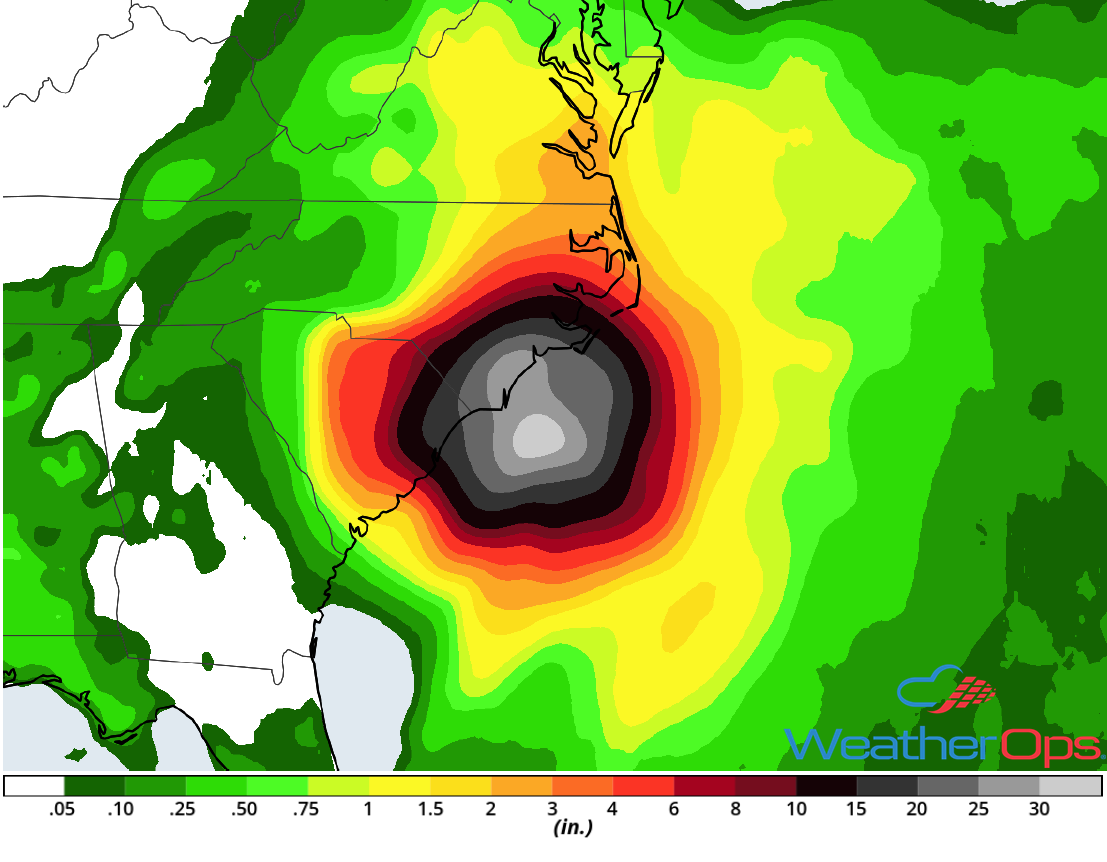 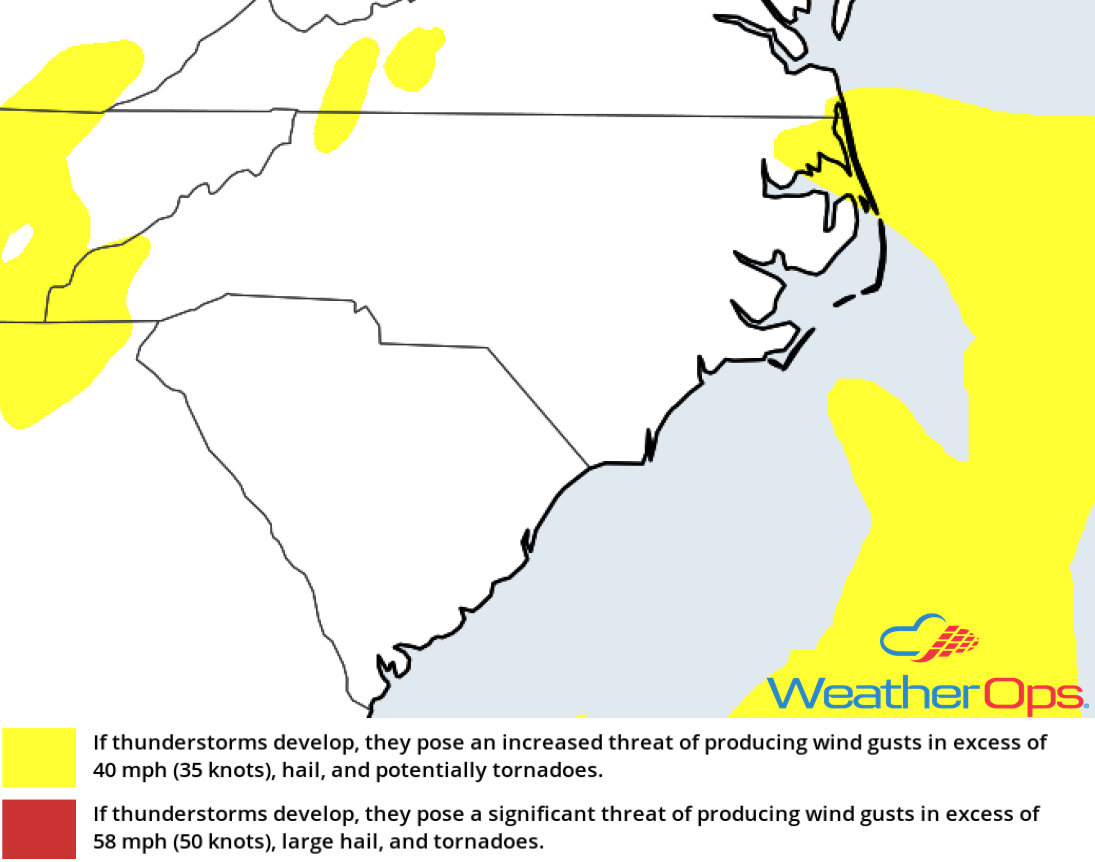 Tropical Storm Conditions for the Northwestern Gulf of Mexico through Early Friday Evening
Satellite imagery indicates that Invest 95L has not become better organized overnight. There are no signs of a closed center and therefore 95L remains a tropical wave. However, thunderstorm activity is on the increase and upper level conditions are likely to remain marginally conducive for slow and limited organization. Therefore, winds may range 25-35 knots with gusts in excess of 40 knots. Seas will range 5-12 feet. In addition, there will be a low to moderate risk for waterspouts. 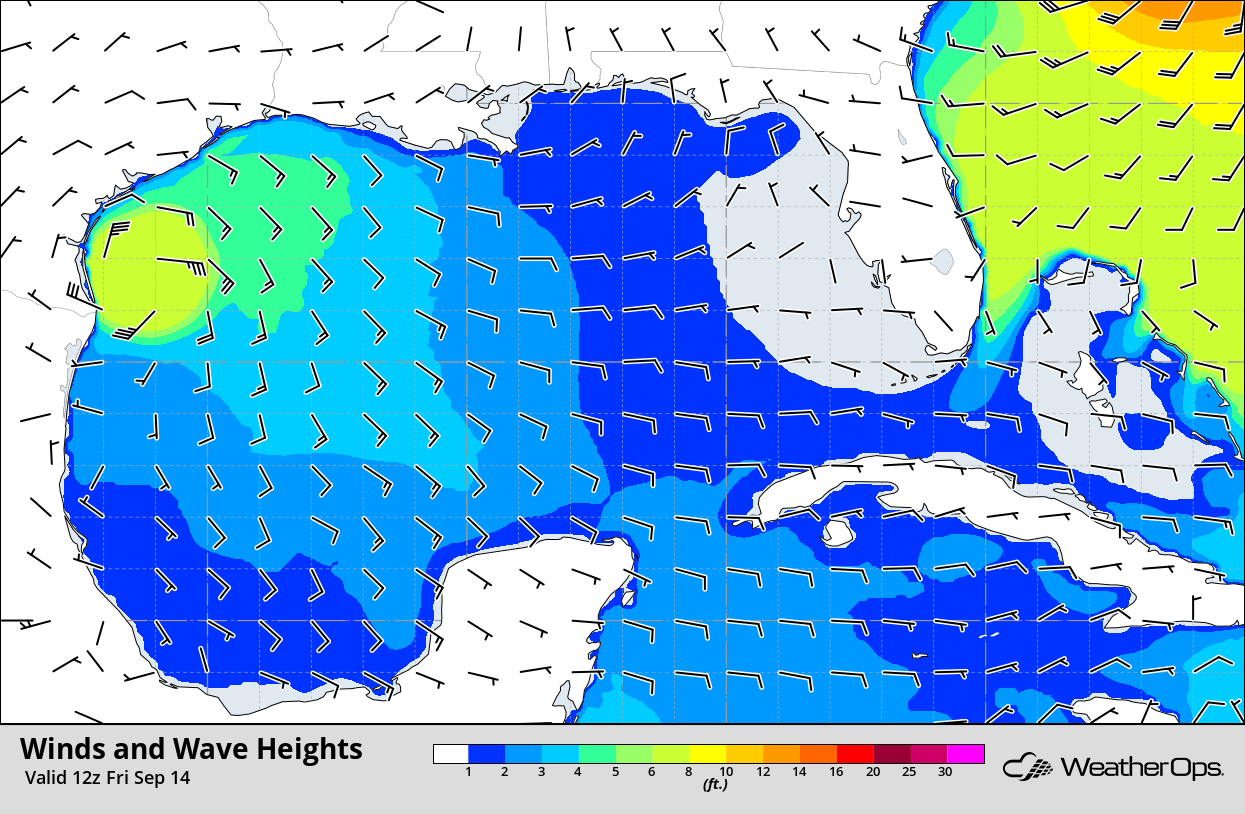 Potential for Thunderstorms Friday and Saturday across North Dakota and Minnesota
There will be a chance for strong to severe thunderstorms on Friday and Saturday across eastern North Dakota into northern Minnesota. Scattered thunderstorms are expected to develop along and near a stalled front as an area of low pressure moves into the Northern Plains. Strong to damaging winds will be the primary hazards with these storms, but isolated instances of large hail cannot be ruled out. The risk will be in nearly the same area each day due to the front remaining nearly stationary.

Tropical Update
Hurricane Florence (green oval) is 145 miles east-southeast of Wilmington, North Carolina and is moving northwestward at 10 mph. This general motion accompanied by a decrease in forward speed is expected to continue through today. A turn toward the west-northwest and west at an even slower forward speed is expected tonight and Friday. By Friday night, a turn toward the west-southwest is expected. On the current forecast track, the center of Florence will approach the Carolina coast tonight and Friday. A slow motion across eastern South Carolina is forecast Friday night through Saturday night. Maximum sustained winds are at 105 mph with higher gusts. Little change in intensity is expected before the center reaches the coast, with weakening expected after the center moves inland.

Tropical Storm Isaac (blue oval) is 50 miles southwest of Dominica and is moving westward at 20 mph. A westward motion is expected to continue for the next few days. On the forecast track, Isaac should move across the eastern and central Caribbean the weekend. Gradual weakening is expected as it moves through the eastern Caribbean.

Tropical Storm Helene (red oval) is 1135 southwest of the Azores and is moving northward at 14 mph. This system should turn toward the northeast by Sunday . On the current forecast track, Helene will approach the Azores late Saturday or Sunday. Maximum sustained winds are at 70 mph. Additional weakening is expected during the next 72 hours.

Subtropical Storm Joyce (orange oval) is 980 miles west-southwest of the Azores and is moving west-southwestward at 6 mph. A turn toward the south-southwest and then the south is expected later today through early Friday. A gradual turn toward the east-northeast and northeast with an increase in forward speed is expected Saturday and Sunday. Maximum sustained winds are near 40 mph with higher gusts. Little change in intensity is expected over the next 48 hours and Joyce could become a tropical storm within the next day or two.

A trough of low pressure located over the western Gulf of Mexico (yellow oval) is producing disorganized showers and thunderstorms. While upper level winds are generally conducive for the development of a tropical depression, the system only has about a day before it reaches the western Gulf Coast. Regardless of development, heavy rainfall and gusty winds are expected across northeastern Mexico, Texas, and Louisiana Friday and Saturday.

A Look Ahead
Florence will continue to bring excessive rainfall to portions of the Southeast, Tennessee Valley, Mid Atlantic, and Northeast through Wednesday. Seven day rainfall totals will range 10-20 inches with locally higher amounts in excess of 35 inches expected.

Elsewhere, heavy rain will continue across southern Texas on Sunday. A few thunderstorms may develop across the Northern Plains and Upper Midwest on Monday ahead of a cold front. Additional activity may develop on Tuesday and Wednesday.