Thunderstorms may develop Thursday from portions of New Mexico into the Central High Plains. Elevated winds and seas will continue for portions of the Gulf of Mexico. Excessive rainfall is forecast from the Central Plains into the Midwest along a warm front. A weak tropical wave will bring heavy rain to portions of southeast Florida.

Thunderstorms from New Mexico into the Central Plains on Thursday
Instability will build across the region through the afternoon, resulting in the development of isolated strong to severe thunderstorms. An upper level trough will move just to the north, providing support for the stronger storms. Large hail and damaging winds will be the primary hazards with any storms that develop. Activity should diminish in the evening with the loss of daytime heating.

Elevated Winds and Seas Continue Through Friday Across the Gulf of Mexico
With high pressure to the north of the region and an area of low pressure to the south, enhanced winds and seas will continue through Friday evening. Winds of 20-25 mph with gusts in excess of 35 knots are forecast. Seas will build to 7-10 feet.

Excessive Rainfall Thursday from the Central Plains into the Midwest
A warm front associated with a developing area of low pressure is forecast to slowly lift northward throughout the day on Thursday. As a result, heavy to excessive rainfall is expected as a result of widespread thunderstorms. Rainfall accumulations of 1.5-2.0 inches are forecast with locally higher amounts in excess of 3 inches. 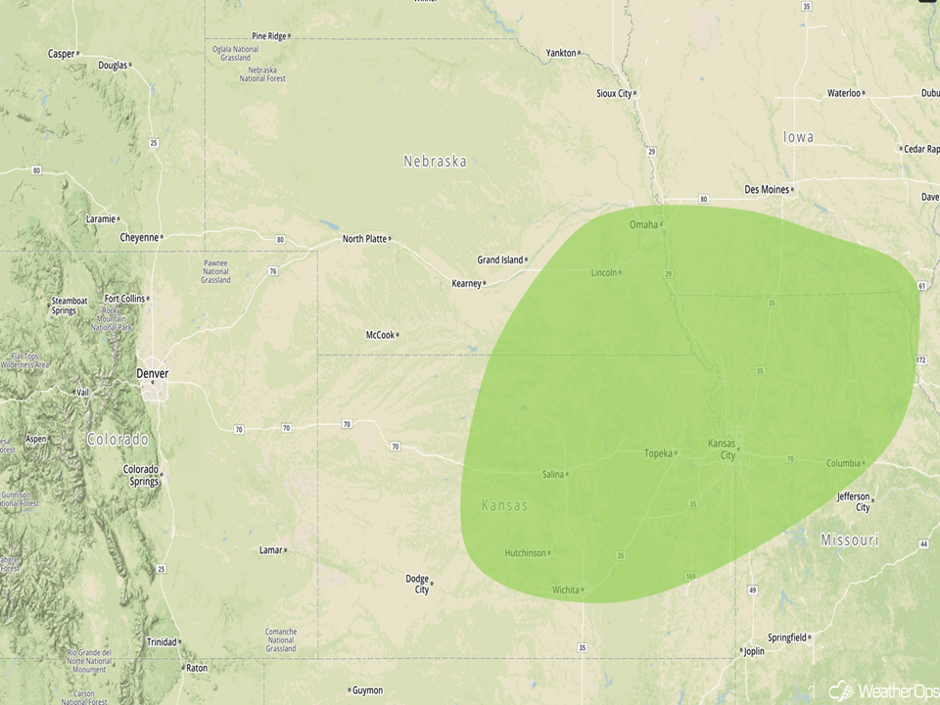 Risk for Excessive Rainfall for Southeast Florida on Thursday
A weak tropical wave is forecast to pass to the southeast of Florida on Thursday. There is not a threat of this wave becoming a tropical system, however, high amounts of moisture will be present with onshore flow. This will result in the potential for heavy to excessive rainfall over southeastern Florida on Thursday. Total rainfall accumulations of 2-3 inches with locally higher amounts in excess of 4 inches are expected. 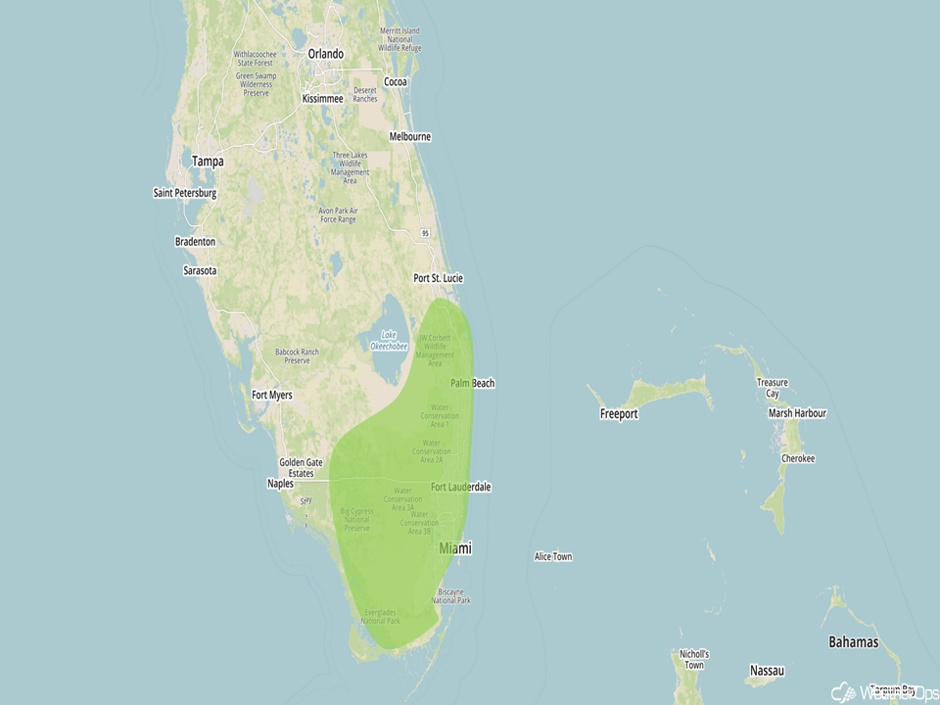 Potential for Thunderstorms Friday across the Southern Plains
An upper level trough progressing to the east on Friday is expected to move into the Southern Plains. With the surface low intensifying, the associated cold front is expected to surge to the southeast by late afternoon and into the evening. Rich, moist air is expected ahead of the cold front. With the front providing lift, strong to severe thunderstorms are expected to develop along the front. Initially, a few supercells may develop with thunderstorms quickly evolving into a squall line with bowing segments. Large hail and damaging winds will be the primary hazards with any thunderstorms that do develop.

Excessive Rainfall For the Midwest and Central Plains on Friday
With the area of low pressure described above and the associated fronts expected to move through the Midwest and Central Plains throughout the day on Friday, heavy to excessive rainfall is forecast. During the morning hours, the warm front is expected to lift to the north with thunderstorms developing along the front. The area of low pressure is forecast to move to the east, with precipitation expected near the center of the low and along the cold front. Additional precipitation is forecast during the evening. Rainfall amounts of 2-3 inches with locally higher amounts in excess of 4 inches are expected. 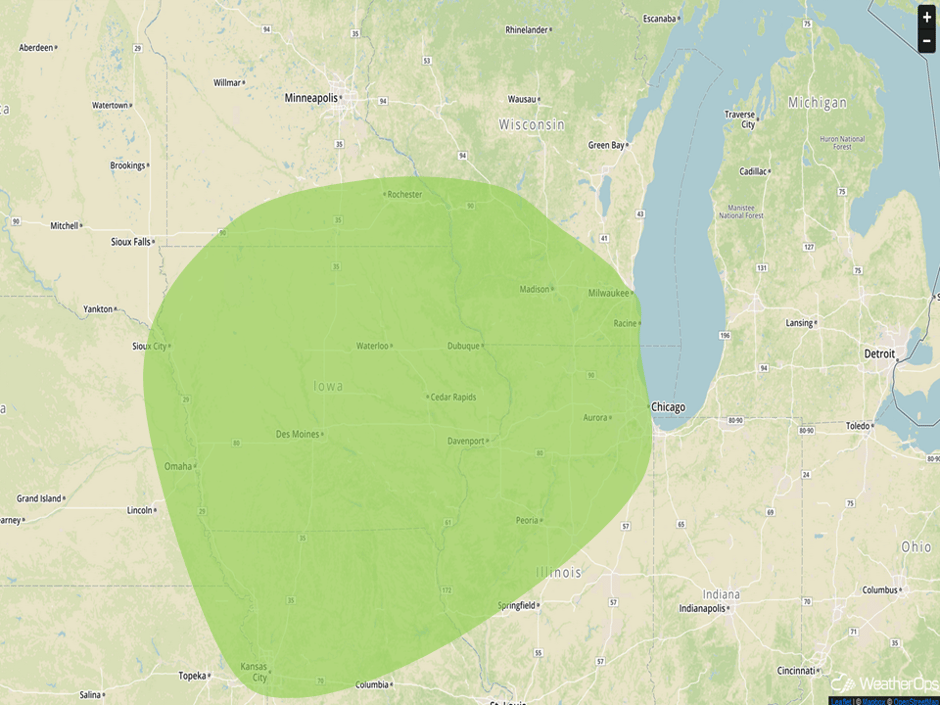 Thunderstorms Saturday along the Gulf Coast
The outer bands associated with Tropical Storm Nate are forecast to begin moving onshore throughout the day. Within the outer convective bands, strong to severe thunderstorms are forecast along the Gulf Coast. Strong winds and isolated tornadoes will be the primary hazards. In addition, heavy to excessive rainfall will be a concern. Rainfall accumulations of 2-4 inches are forecast.

Tropical Update
The center of Tropical Storm Nate (green oval) is 30 miles northwest of Puerto Cabezas, Nicaragua and is moving northwestward at 9 mph. A turn toward the north-northwest with an increase in forward speed is expected tonight and will continue through Friday night. On the current forecast track, the center of Nate should move across northeastern Nicaragua and eastern Honduras later today and then over the northwestern Caribbean tonight and Friday. The center is expected to approach the Yucatan Peninsula late Friday. Maximum sustained winds are at 40 mph with higher gusts. Little change in strength is expected today, but some strengthening is expected tonight and into Friday.

A non-tropical area of low pressure (red oval) is in the Florida Straits centered about 50 miles southwest of Key West. This low is interacting with an upper level low to produce a broad area of disorganized showers and thunderstorms across southern Florida, the northwestern Bahamas, central Cuba, and the adjacent Atlantic waters. Upper level winds are forecast to be unfavorable for tropical cyclone development while the system moves west-northwestward over the eastern Gulf of Mexico over the next day or two. Locally heavy rainfall, coastal flooding, and gusty winds are likely over portions of the Bahamas and Florida over the next couple of days. 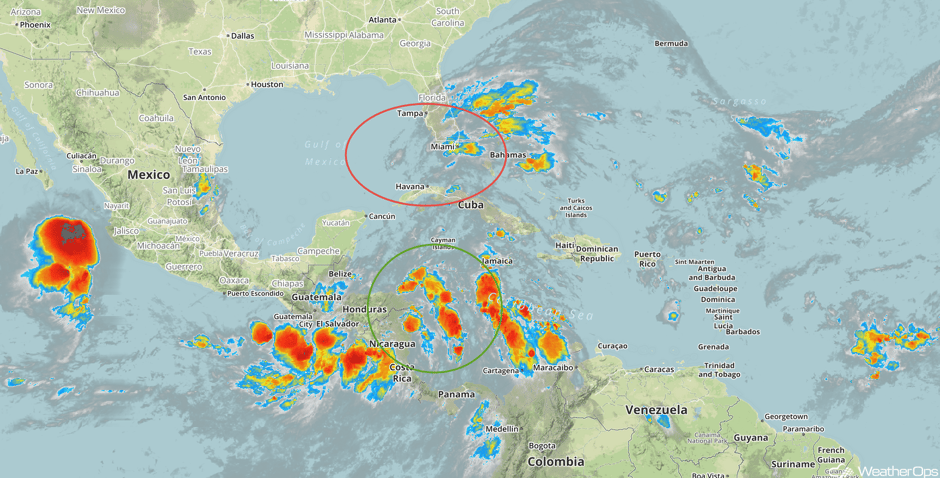 A Look Ahead
As Nate approaches the Gulf Coast on Sunday, strong to severe thunderstorms are forecast. Damaging winds, heavy to excessive rainfall, and isolated tornadoes will all be potential hazards. By Monday, heavy to excessive rainfall will spread into the Southeast and Appalachians. Rainfall amounts of 2-3 inches with locally higher amounts in excess of 4 inches are expected.