Thunderstorms may develop across portions of New Mexico and Texas in response to an upper level disturbance on Thursday. 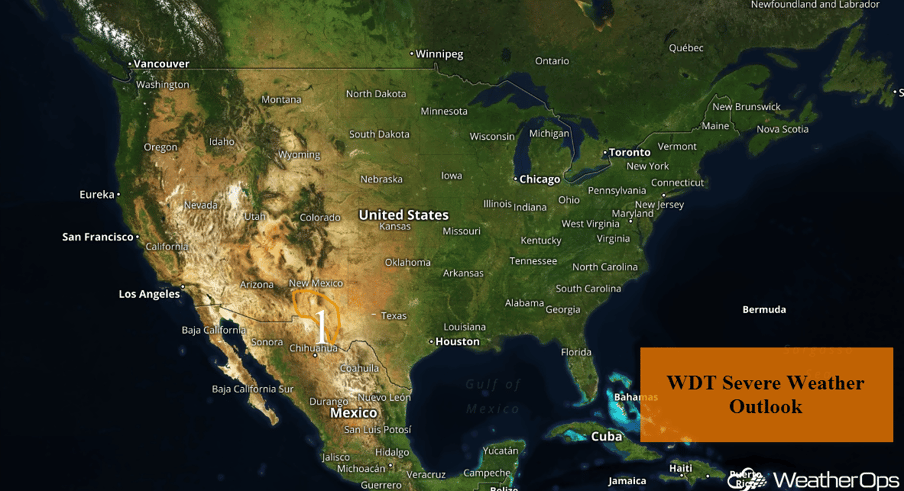 Thunderstorms Across Portions of New Mexico and Texas on Thursday
As showers continue to move out of the region, skies will begin to clear later this morning. At the same time, an upper level disturbance will begin to make its way eastward across the Desert Southwest. As this occurs, daytime heating will result in an increase in instability this afternoon. This instability combined with some modest wind shear, modest low level moisture, and forcing from the passing upper level disturbance will result in the development of scattered showers and thunderstorms this afternoon, with a few of these thunderstorms possibly becoming strong to severe. The primary hazards with any of these stronger storms will be large hail and damaging winds. Any thunderstorm activity that develops during the afternoon hours is forecast to quickly diminish this evening.

Severe Thunderstorms Expected Saturday from the Missouri Valley to Southern Plains
A strong upper level trough is forecast to move eastward out of the Rockies and into the central US on Saturday. At the surface, a cold front will also track eastward and promote thunderstorm development across the region. Isolated thunderstorm development will begin as early as mid-afternoon, with some supercell thunderstorms possible. By mid to late evening, thunderstorms are forecast to rapidly organize into a powerful squall line as they spread eastward ahead of the front. Conditions are expected to be favorable for severe thunderstorms, with damaging winds the primary hazard. The highest severe risk is currently centered over central and eastern Oklahoma and far northern portions of Texas. In addition to the severe thunderstorm risk, there will be a risk for excessive rainfall. Widespread rainfall amounts of 1-3 inches can be expected, with locally higher amounts in excess of 4 inches. 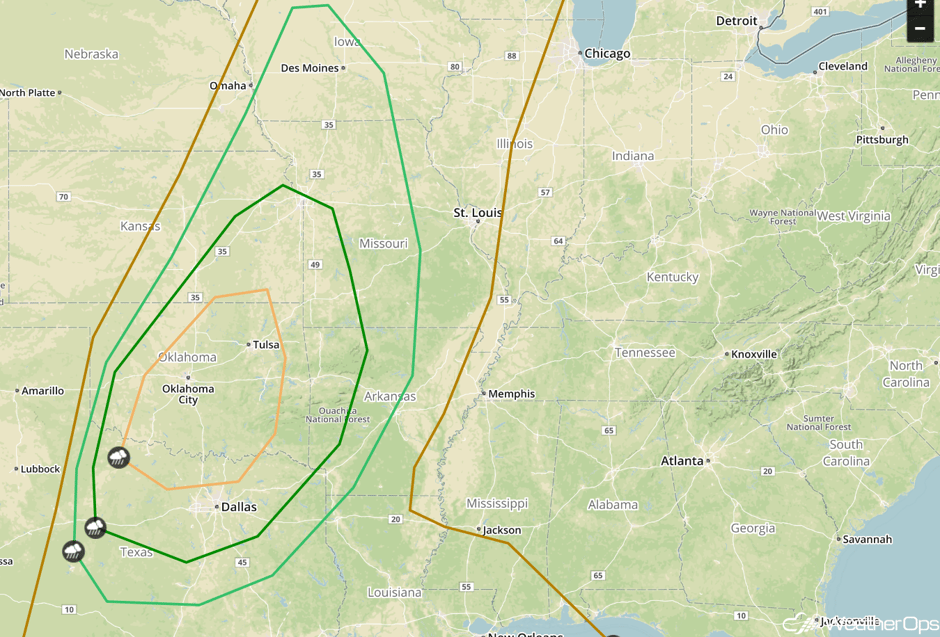 A Look Ahead
A strong cold front will push into the Lower Mississippi Valley on Sunday, allowing for the development of thunderstorms. Gusty winds and hail will be the primary hazards with these storms. In addition, heavy rain will also be a concern. Rainfall amounts of 1-3 inches with isolated higher amounts in excess of 4 inches are forecast, leading to the potential for flooding. As the cold front pushes eastward on Monday, there will be a risk for heavy rain from the Ohio Valley to the Gulf Coast. Rainfall amounts will range 1-3 inches with locally higher amounts in excess of 4 inches.