Snow from the Mid Mississippi Valley to the Ohio Valley on Thursday
Light to moderate snow is ongoing across portions of Missouri and Illinois this morning, primarily on the backside of a large upper low situated over the Mid-Mississippi Valley. This should result in snow from eastern Missouri into Ohio and portions of Michigan as the low continues to move eastward and northeastward. Snow accumulations will range 1-3 inches with locally higher amounts in excess of 4 inches. 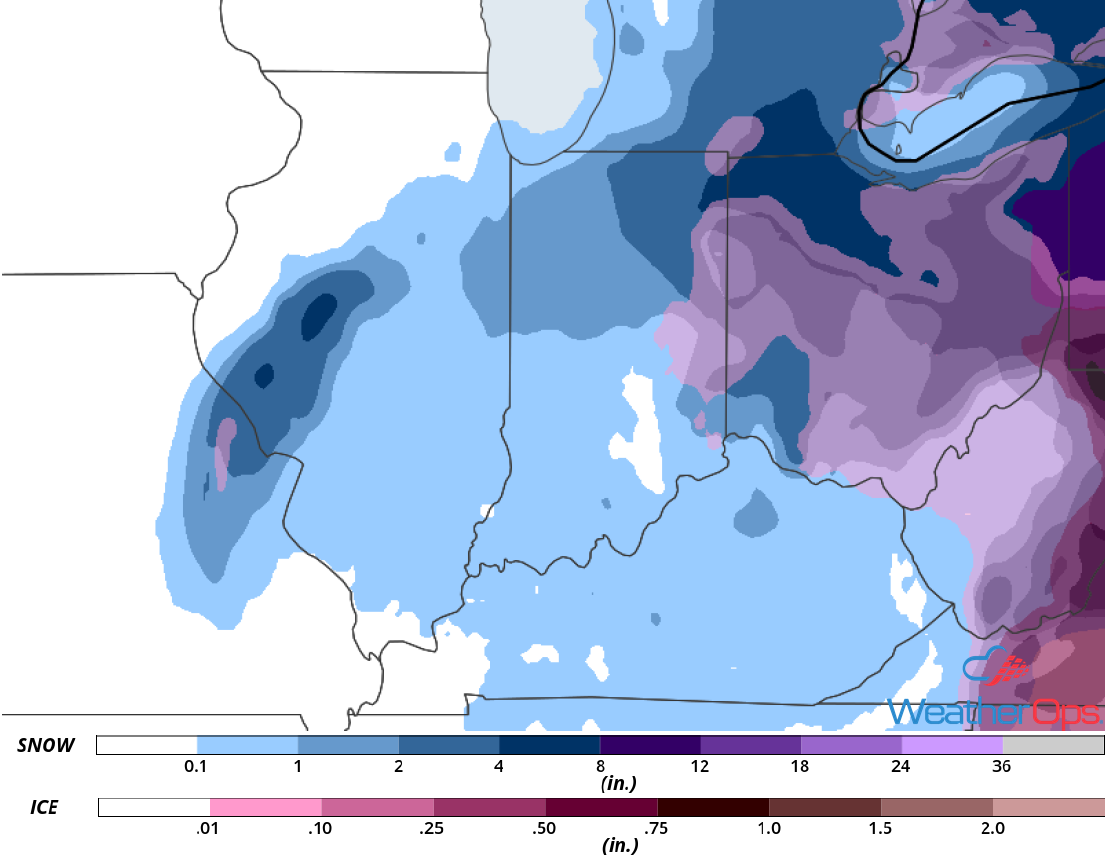 Freezing Rain and Snow Continuing Thursday for the Appalachians
Freezing rain is currently underway across the Appalachians. Widespread precipitation stretches from the Tennessee/North Carolina border to West Virginia and Virginia. Temperature profiles will support a mix of freezing rain and snow into Thursday night, as well as snow. Ice accumulations will range 0.10-0.50 inch, limiting sleet and snow accumulations. Areas along the border of Virginia and West Virginia could pick up 2-5 inches of snow with locally higher amounts. Further south, sleet will be more prevalent with widespread accumulations of 1-2 inches. Across the higher elevations, snow accumulations will range 4-6 inches with locally higher amounts in excess of 8 inches. 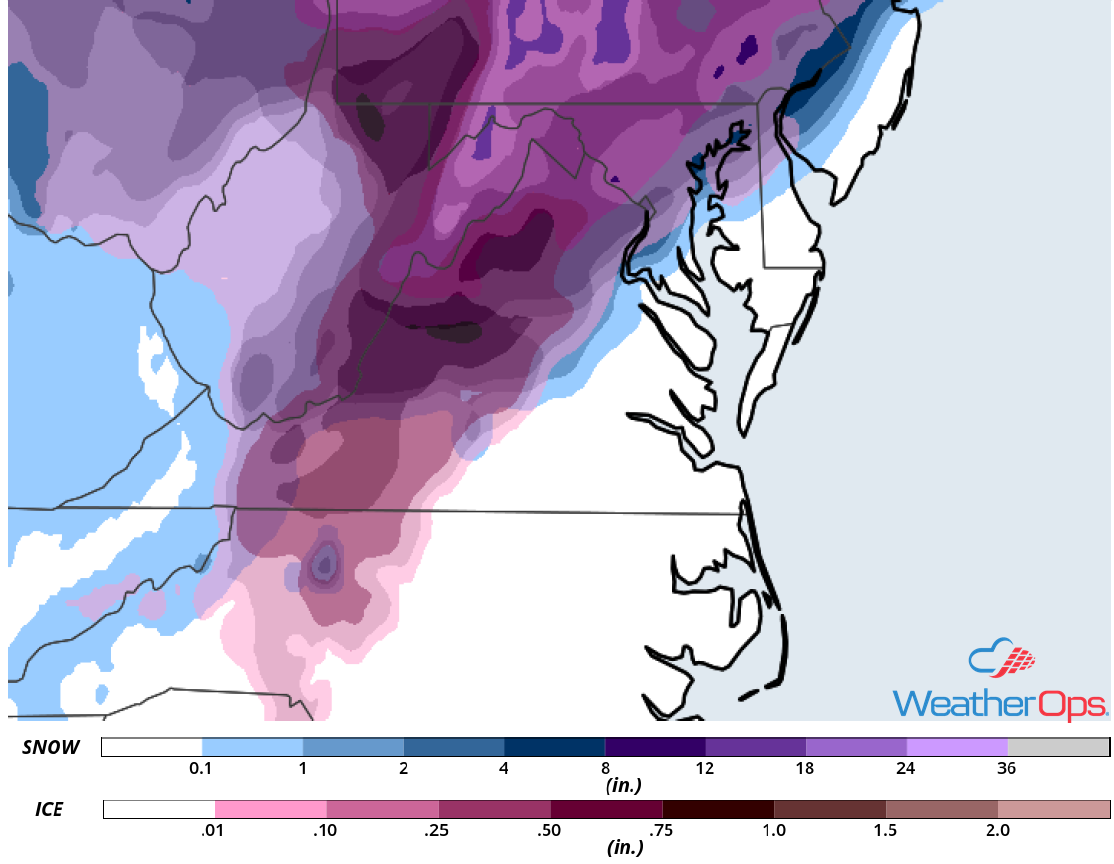 Snow and Ice Accumulation for Thursday

Snow across the Northeast through Friday
Heavy snow is expected across the region through Friday. After the initial rainfall moves into the region, temperatures aloft and at the surface are expected to rapidly fall below freezing, with snow increasing throughout the day. Snow accumulations will range 4-6 inches with accumulations close to a foot across Upper New England. One exception will be along the coast, where snowfall totals will range 2-4 inches. Snow will taper off from south to north, ending completely by late Friday night. 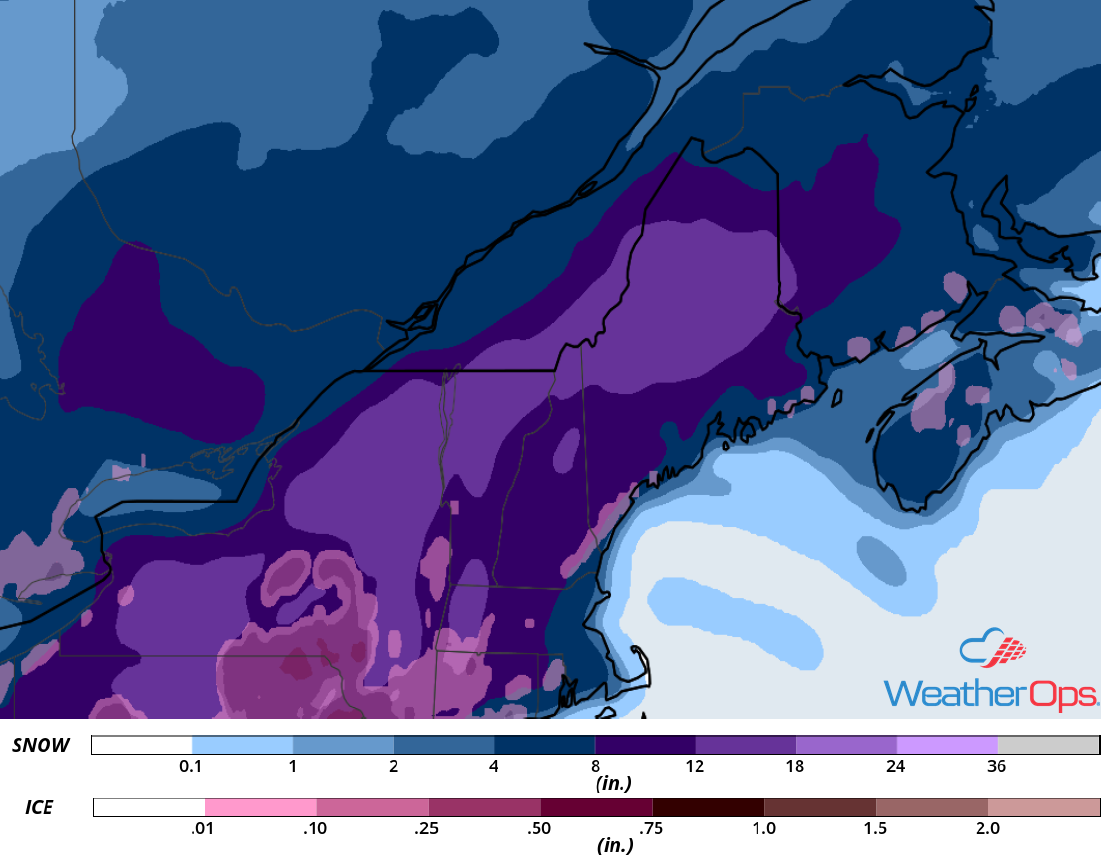 Thunderstorms Thursday for the Carolina Coast
A large upper level low is situated over the Midwest this morning. To the east and southeast of this low, numerous showers and thunderstorms are ongoing from Florida into the Northeast. Strong to severe thunderstorms may develop along the Carolina coast where plentiful moisture and instability are present. A broken line of thunderstorms is forecast to develop along the coastal regions and quickly move eastward through the late morning. This will pose a threat for damaging winds and perhaps a couple of tornadoes as storms move offshore by the afternoon. 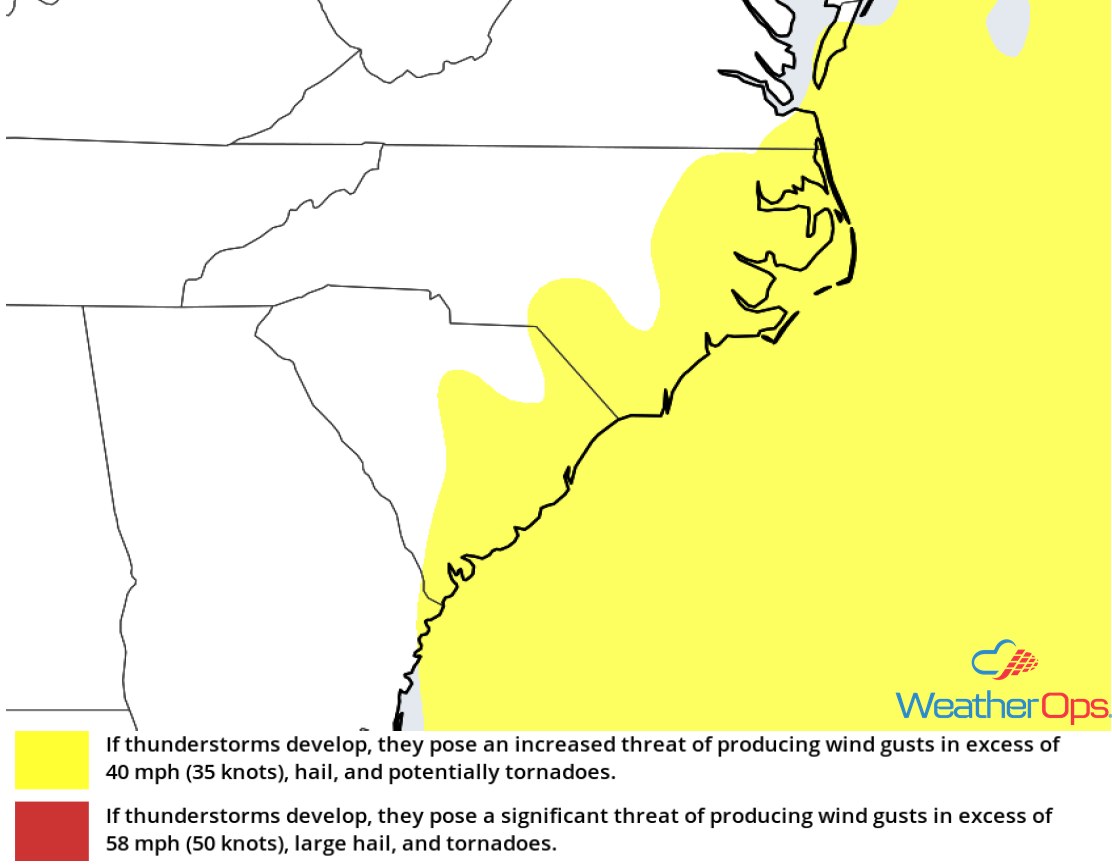 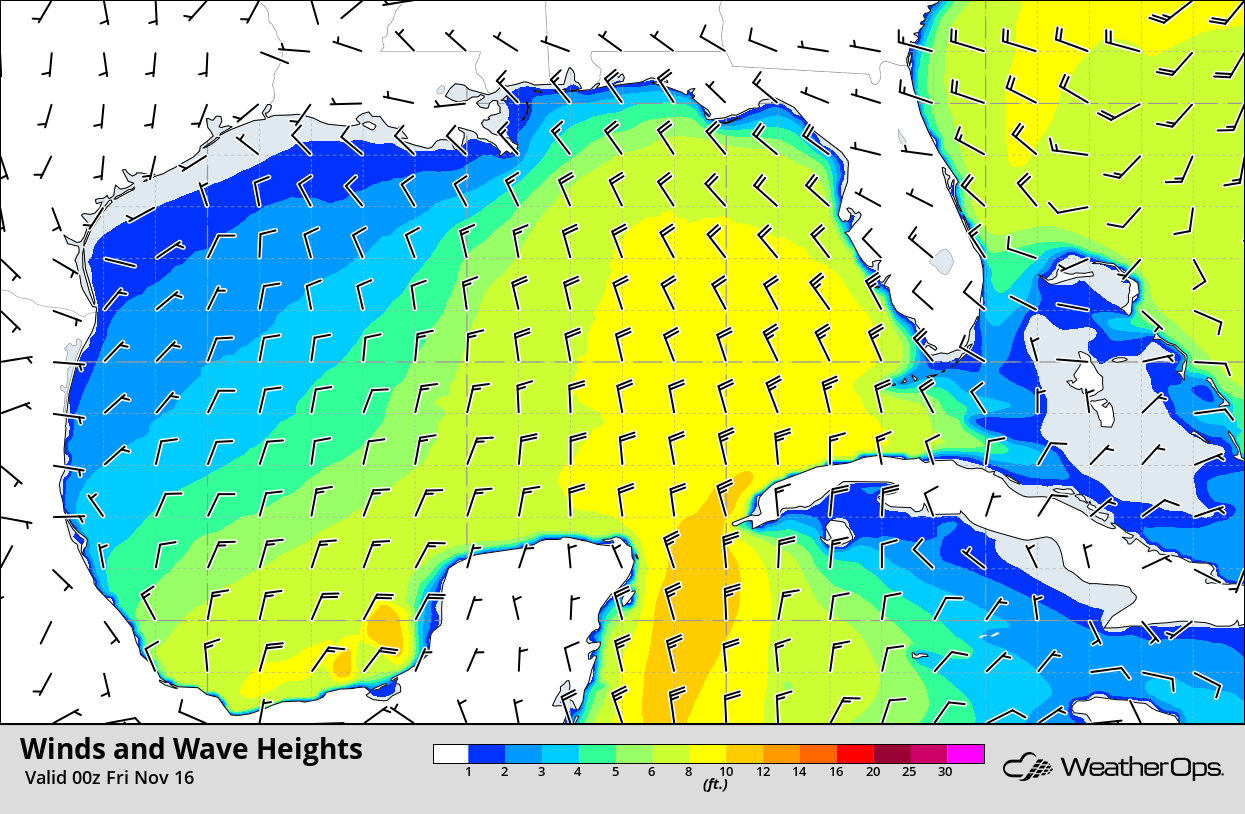 Potential for Snow Friday across North Dakota
An Alberta Clipper is forecast to move southeastward into North Dakota. While compact, this low will bring areas of moderate to heavy snow late Thursday through Friday night. Snow accumulations of 2-4 inches with locally higher amounts in excess of 5 inches are expected. In addition, there will be a potential for freezing rain; ice accumulations should be less than 0.25 inch. 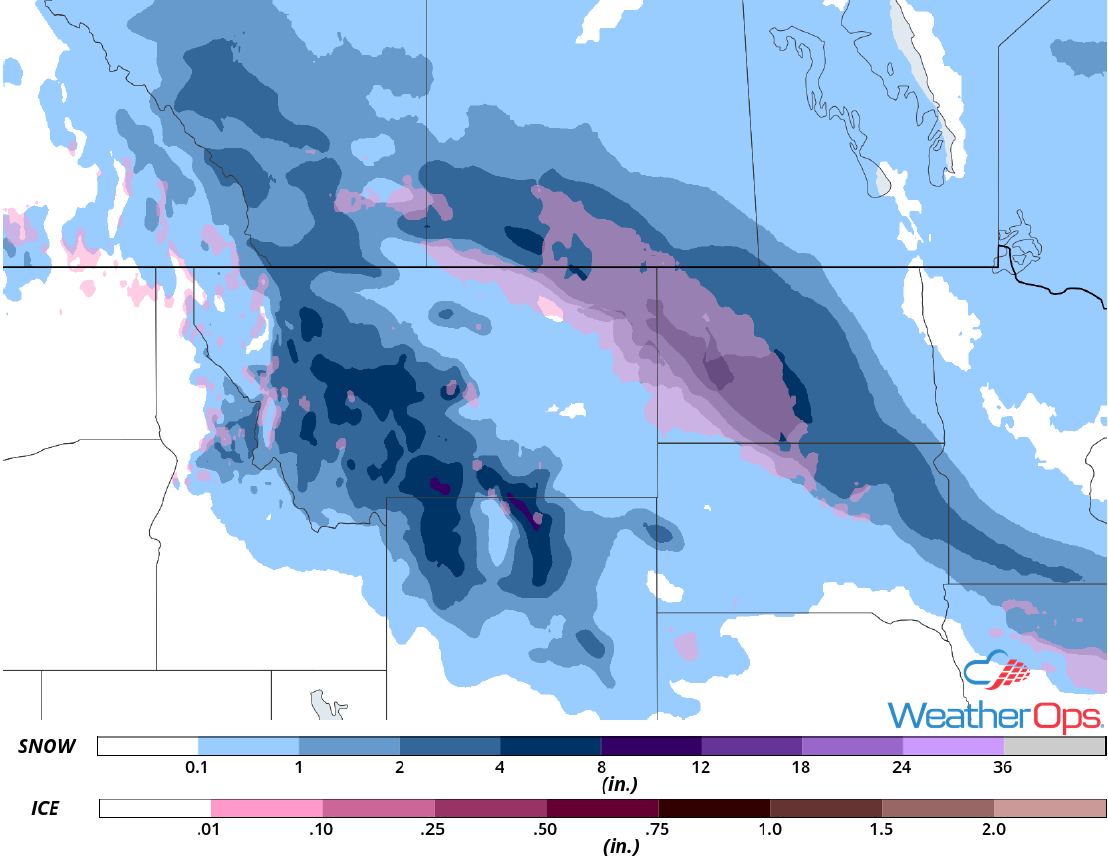 Snow from Montana into the Central Rockies Friday and Saturday
A weak area of low pressure will move southward into Wyoming. Snow could be heavy at times with 4-8 inches of snow expected. Lower elevations may see 1-3 inches. 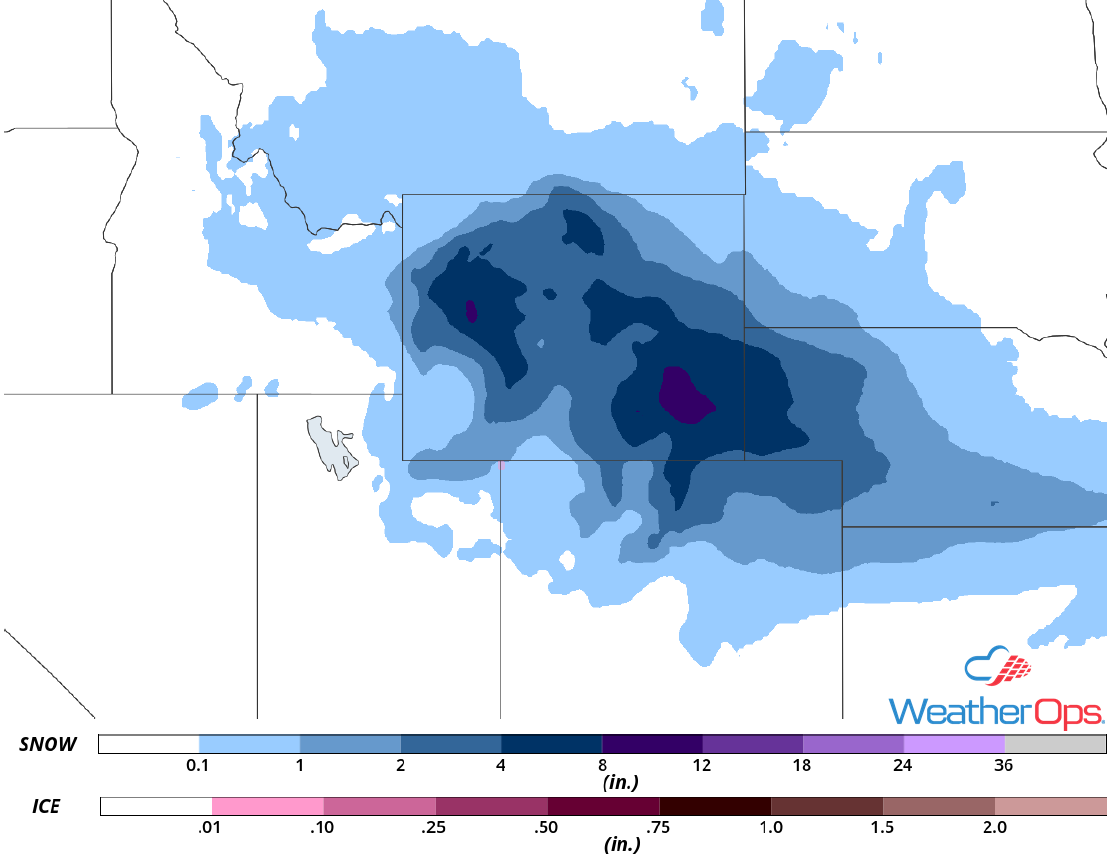