National Weather Summary for Thursday, May 24, 2018

An area of low pressure moving into the Plains will bring a potential for thunderstorms to portions of the Central Plains and Upper Midwest on Thursday. There will be a risk for excessive rainfall across the Southeast as an upper level disturbance remains in place over the region.

Thunderstorms for the Upper Midwest and Central Plains Thursday
An upper level trough will track eastward across the Northern Plains today. At the surface, an area of low pressure and the associated fronts will also move eastward across the Plains. Southerly flow will bring warm moist air ahead of a slow moving cold front. With this moisture in place and daytime heating, instability will build this afternoon. This will allow for the development of showers and thunderstorms along and ahead of the cold front in the High Plains. These thunderstorms will track eastward overnight; some thunderstorms could be strong to severe with large hail and damaging winds the primary hazards. As the low level jet intensifies, these storms will continue to track eastward overnight and become linear with damaging winds becoming the primary hazard. 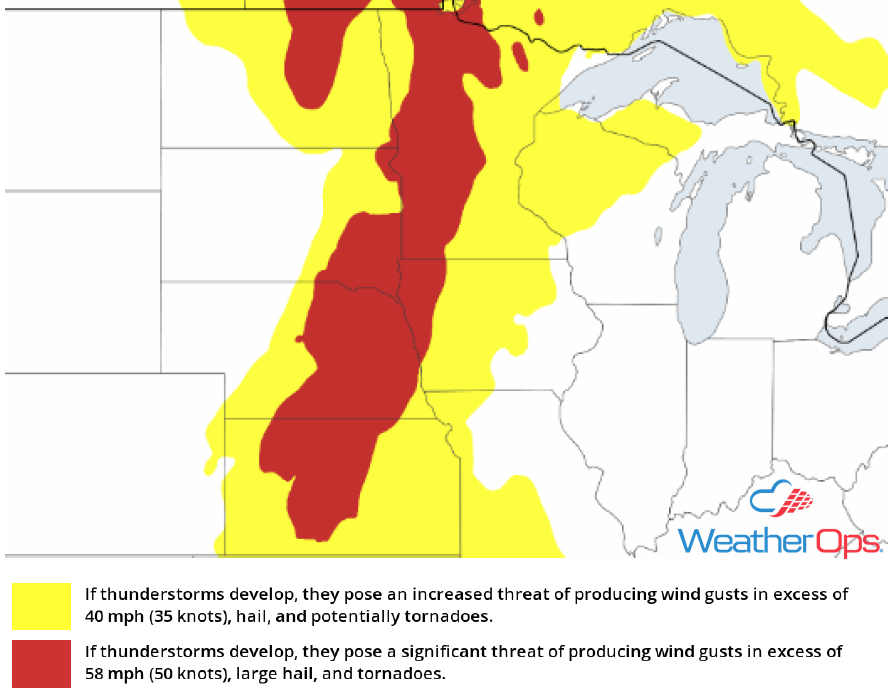 Excessive Rainfall Thursday for the Southeast
An upper level disturbance will remain stationary over the Southeast on Thursday. At the surface, southeasterly flow will continue to pump moisture from the Atlantic into the region. Increased daytime heating through the afternoon will allow instability to build across the Southeast. This will allow for the development of showers and thunderstorms. Given ample moisture and the lack of movement in the upper level disturbance, any thunderstorms that develop will be slow to move, resulting in a threat for heavy to excessive rainfall. Rainfall amounts of 1-2 inches with locally higher amounts in excess of 3 inches are forecast, leading to the potential for flash flooding. Activity should decrease in the evening with the loss of daytime heating. 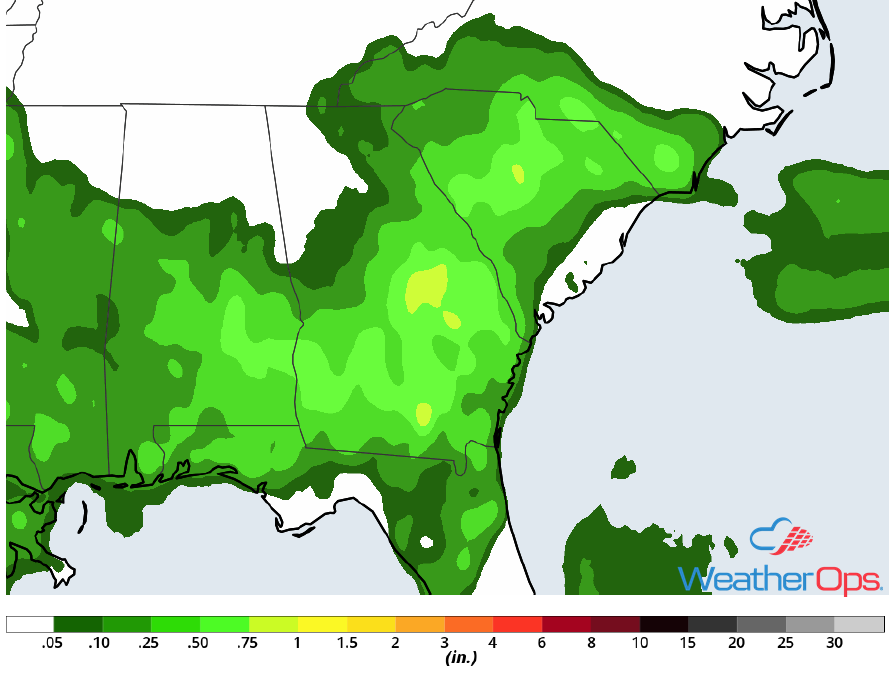 Risk for Thunderstorms across the Interior Northwest Friday
An upper level trough will dig into the western US on Friday. The trough will provide the lift for the development of thunderstorms. With increased wind shear and moisture, showers and thunderstorms are expected to develop during the afternoon and evening. Some of these storms could become strong to severe, with a few becoming supercells. Large hail, damaging winds, and tornadoes will all be potential hazards with these storms. Activity should diminish during the evening with the loss of daytime heating. 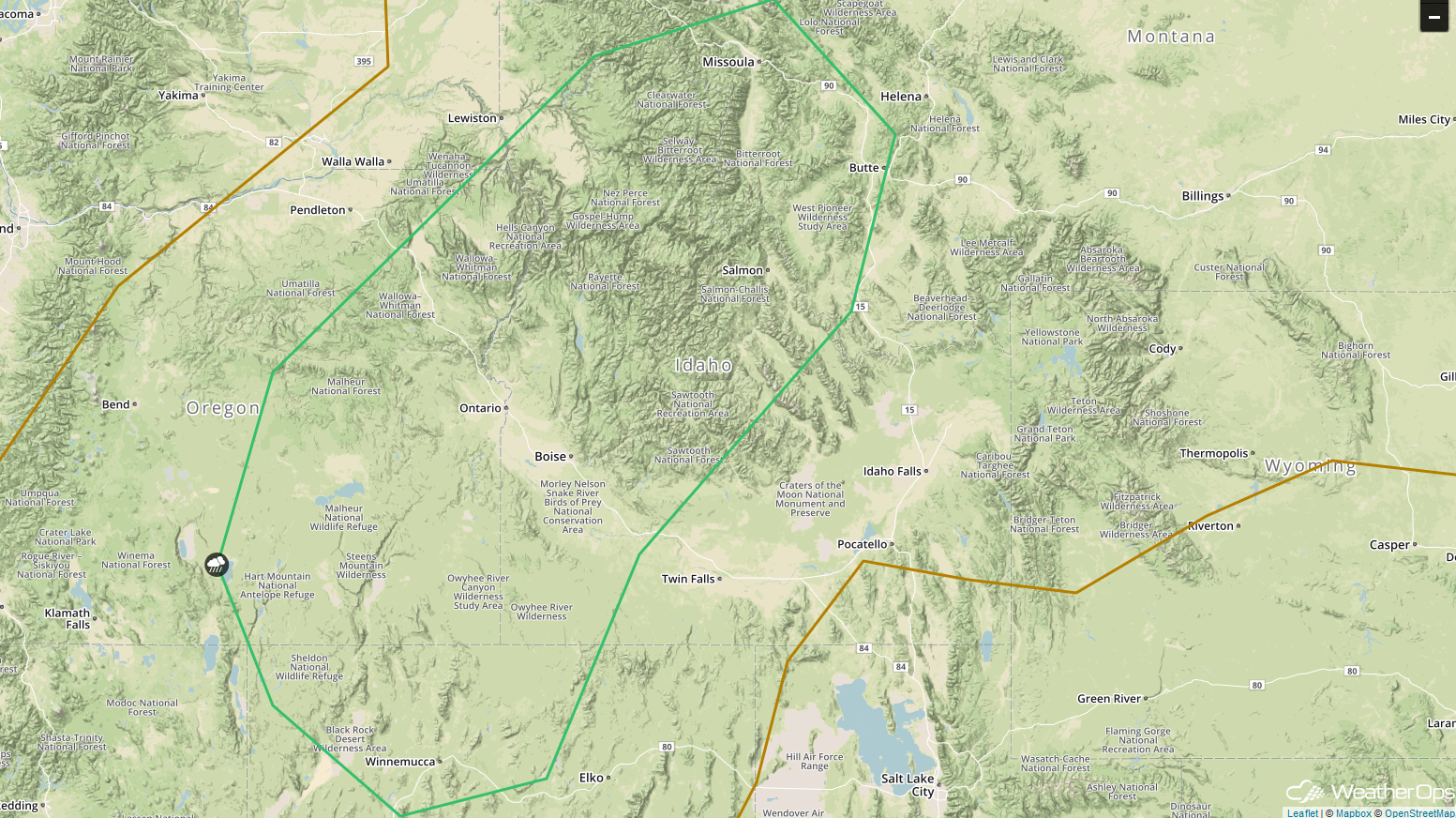 Thunderstorm Potential Friday from the Northern Great Lakes to the Southern Plains
The area of low pressure that is expected to bring a risk for severe thunderstorms to portions of the Northern and Central Plains on Thursday will continue to move eastward on Friday. Thunderstorms from Thursday night may continue into Friday morning, but this activity should weaken through the morning. During the afternoon, instability will build ahead of a cold front, allowing for the development of showers and thunderstorms from the Southern Plains into the Upper Midwest. Large hail and damaging winds will be the primary hazard with the stronger storms as they track eastward.

Thunderstorms across Northern Maine Friday
A weak surface low is forecast to develop in southern Quebec and track eastward across northern Maine and the Canadian Maritimes on Friday. Southerly flow ahead of this system will bring moisture northward. With this moisture and daytime heating, instability will increase during the afternoon and evening. Although wind shear will remain weak, ample forcing and instability should result in widely scattered showers and isolated to strong severe thunderstorms. Hail and damaging winds will be the primary hazards with these storms. Activity should diminish after sunset with the loss of daytime heating.

Major Cities in Region: Caribou, ME 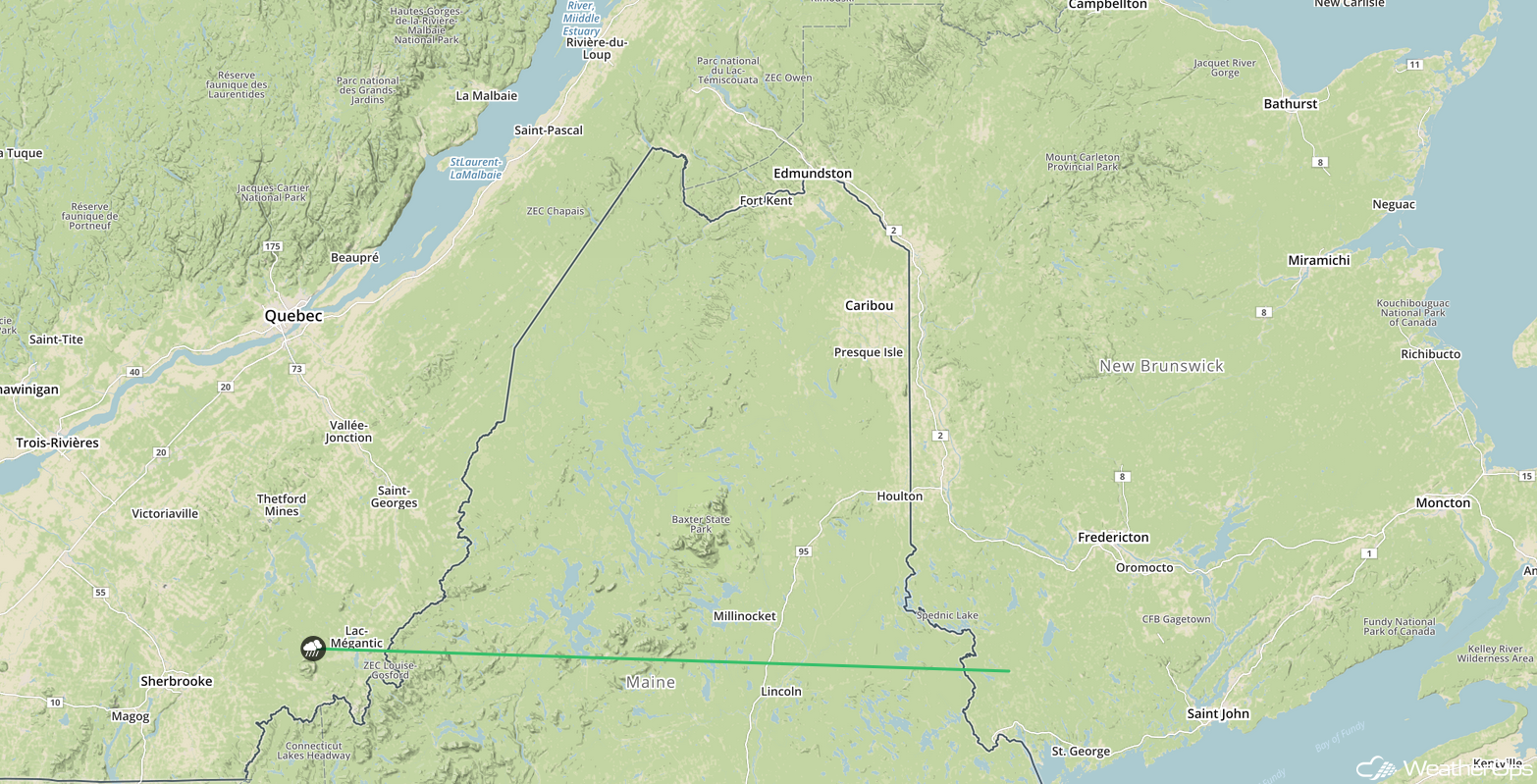 Potential for Thunderstorms Saturday across the Northern Rockies
An upper level trough will continue to track eastward across the Intermountain West on Saturday. At the surface, an area of low pressure will track east-southeastward across the Great Basin. Daytime heating will create widespread instability across the region. With the area of low pressure providing ample lift, showers and thunderstorms are expected to develop. A few storms could become strong to severe with damaging winds being the primary hazard. This activity will track eastward Saturday afternoon and diminish after sunset. 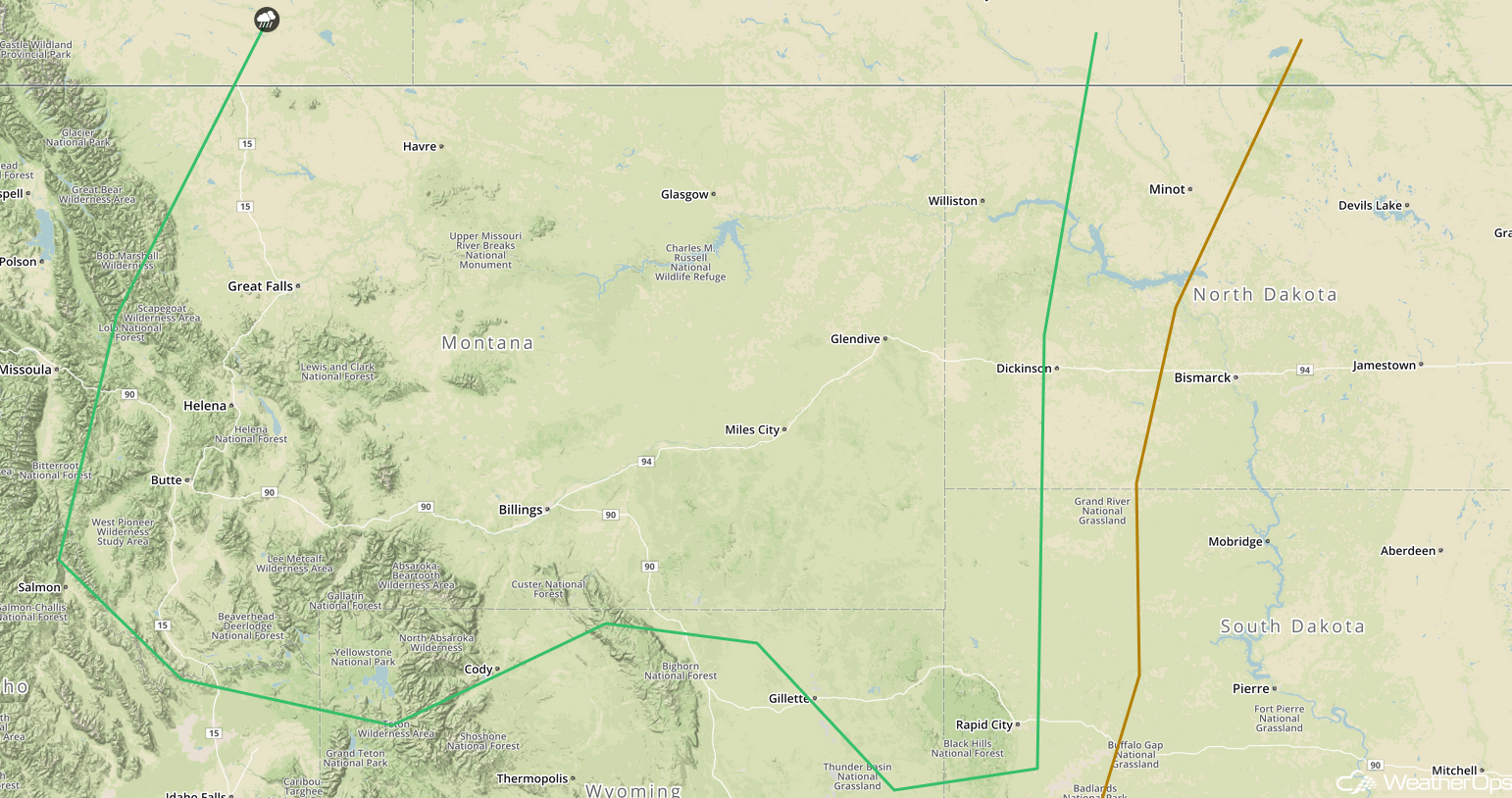 Tropical Update
A broad area of low pressure centered over the southeastern Yucatan Peninsula is gradually becoming better defined. Although showers and thunderstorms are primarily confined to the northwestern Caribbean Sea, gradual development of this system is expected over the next couple of days as it drifts northward near the Yucatan Peninsula. Environmental conditions are expected to become more conducive for development through early next week. A subtropical or tropical depression is likely to develop by late Saturday over the southeastern Gulf of Mexico. Regardless of development, locally heavy rainfall is forecast across western Cuba, Florida, and the Northern Gulf Coast into early next week. In addition, the threat for rip currents will increase along the Gulf coast from Florida westward to Louisiana through the holiday weekend. 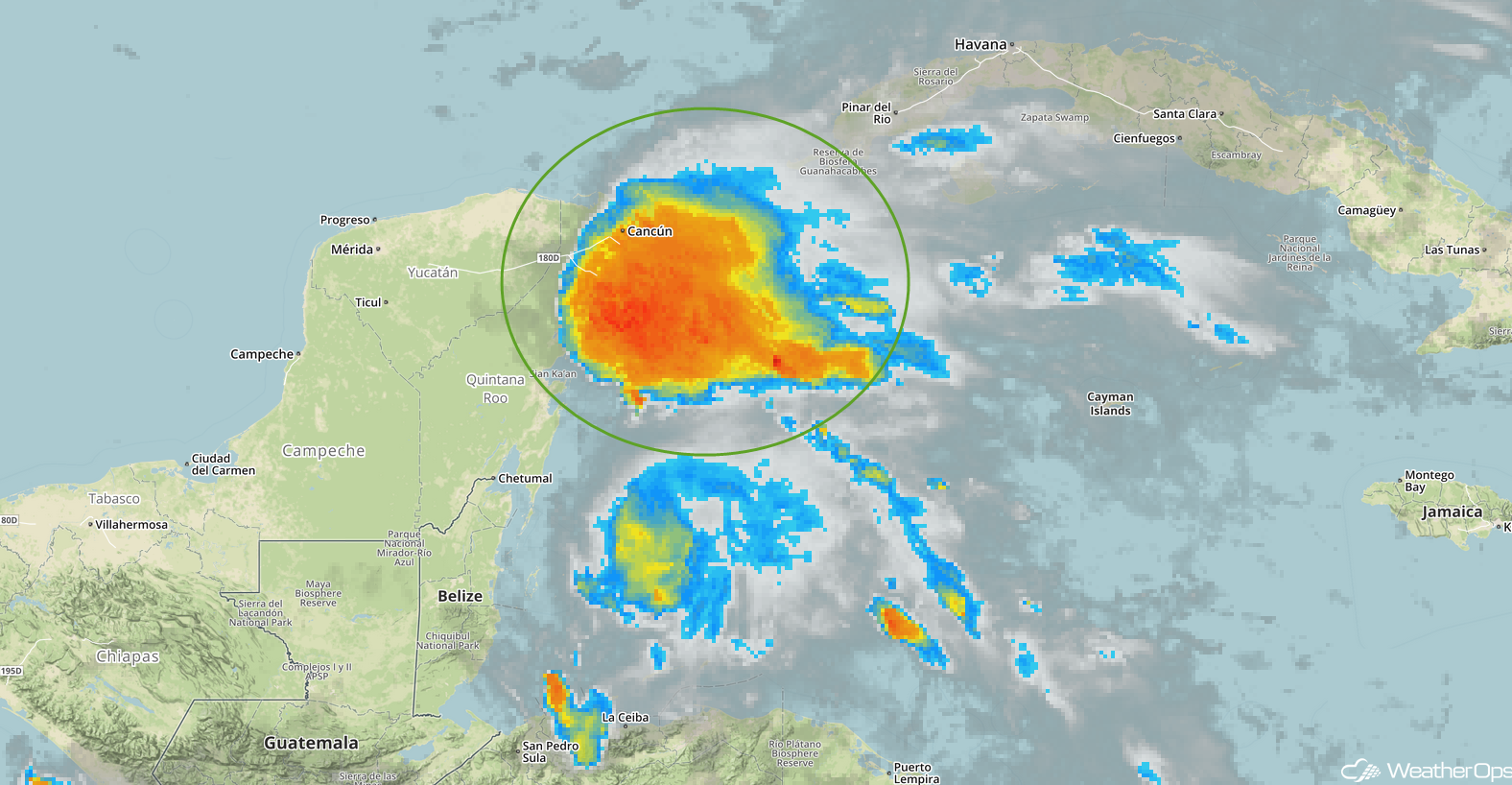