National Weather Summary for Thursday, May 11, 2017

There will be a risk for strong to severe thunderstorms Thursday from the Plains to the Mid Atlantic as an upper level low tracks eastward. Multiple rounds of showers and thunderstorms will allow for a risk for excessive rainfall across the Ohio Valley into the Central Appalachians. A nearly stalled frontal boundary across the Arklatex region will bring a potential for excessive rainfall on Thursday.

Thunderstorms from the Ohio Valley to Mid Atlantic on Thursday
Thunderstorms may develop across Region 1 as daytime heating increases instability through the afternoon. These storms could become marginally severe as they progress through the Appalachians and eventually into portions of Virginia and North Carolina. Severe winds and hail will be the primary hazards with any storms that develop, however, an isolated tornado or two cannot be ruled out during the afternoon and evening. In addition, heavy rain will be a concern. Rainfall amounts between 0.75-1.50 inches with isolated higher amounts in excess of 2.50 inches are expected, with the highest amounts over the Appalachians. 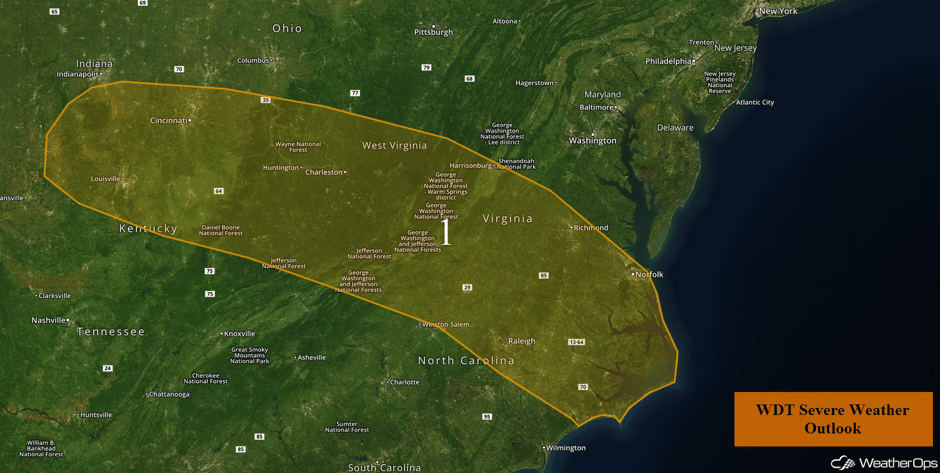 Potential for Thunderstorms Thursday from Southern Plains to Mississippi Valley
A closed upper low over the Southern Plains is forecast to promote another round of showers and thunderstorm activity on Thursday from the Oklahoma/Kansas border southward into Texas, Arkansas, and Louisiana. With high instability in place, large hail may develop across northern and northeastern Oklahoma, along with an isolated tornado threat. A stalled front is situated across portions of Oklahoma and Texas, which will be a focus for the development of strong to severe thunderstorms. Hail and severe winds will be the primary hazards with these storms, but an isolated tornado or two cannot be ruled out. As storms continue eastward through the late afternoon and evening hours, activity will overspread Arkansas and portions of Louisiana. The main threat will begin to transition into a severe wind threat with the large hail potential diminishing through the late evening. Heavy rain will also be possible with these storms. Rainfall amounts of 1-2 inches with locally higher amounts in excess of 3 inches are forecast, resulting in areas of flash flooding and runoff. 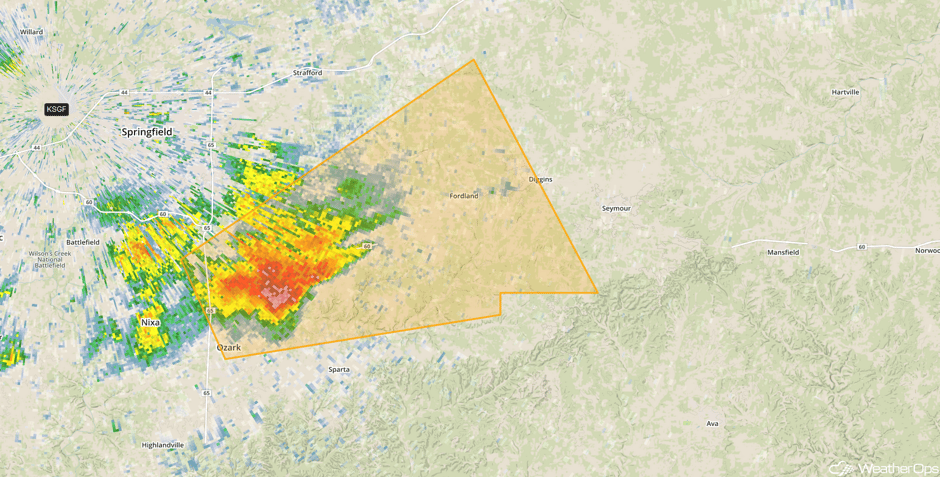 Update 1:09pm CDT: Severe Thunderstorm Watch for portions of Arkansas. Kansas, Missouri, and Oklahoma until 9pm. Hail to 3", damaging winds to 70 mph, and isolated tornadoes will be the primary hazards. 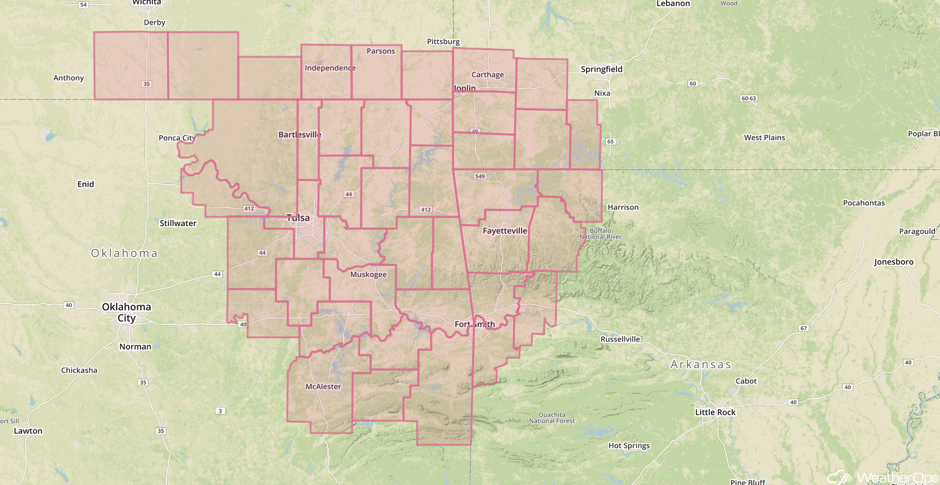 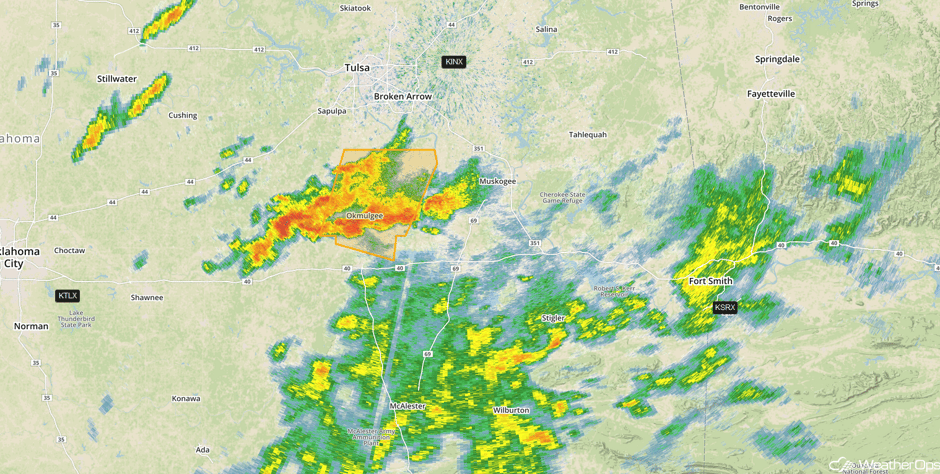 Update 1:30pm CDT: Severe Thunderstorm Warnings are popping up in portions of Kansas and Oklahoma. Hail and damaging winds will be the primary hazards. 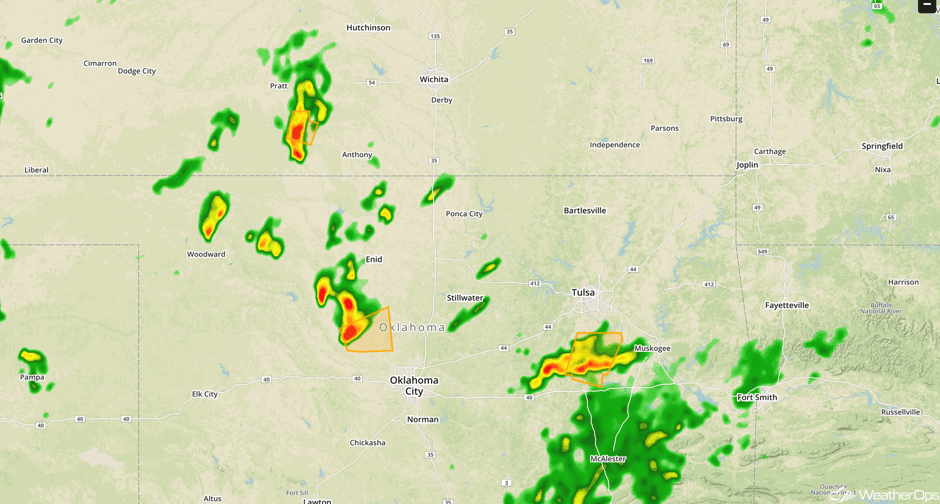 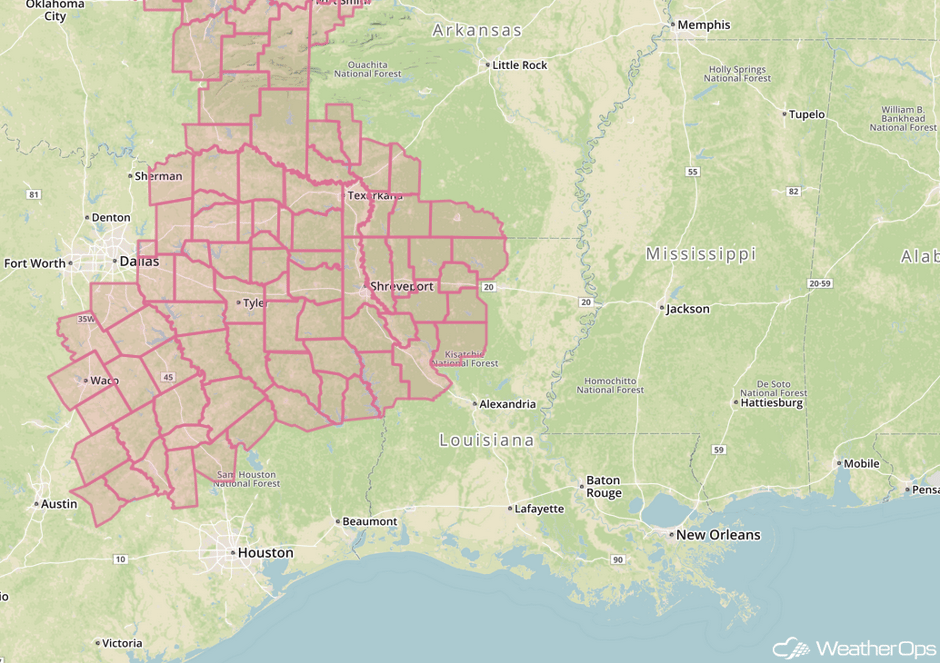 More tornado damage seen from the east side of Owasso - mostly roof and tree damage so far. #okwx pic.twitter.com/jHp5Ze3Etq

Strong to Severe Thunderstorms Possible Friday for the Southeast
The low described above will continue to progress eastward on Friday. The associated cold front will track eastward across the Deep South and Southeast. With warm moist air being pulled northward ahead of the low and daytime heating increasing instability across the region, scattered showers and thunderstorms are forecast to increase in coverage and intensity during the afternoon and evening. Large hail and damaging winds will be potential hazards with the stronger storms. This is somewhat conditional on how early morning activity impacts afternoon activity. If enough coverage of early morning activity occurs, the threat for thunderstorms may diminish during the afternoon.

Risk for Excessive Rainfall for Central Appalachians Continues Friday
A frontal boundary will remain draped across the Appalachians on Friday. With the front providing lift and ample moisture in place, showers and thunderstorms will continue to increase in coverage and intensity throughout the day. With the ground already saturated, additional rainfall is expected across the region. Rainfall amounts of 0.75-1.50 inches with isolated higher amounts in excess of 2.50 inches forecast. This will result in an increased threat for excessive runoff and flooding across the region.

Excessive Rainfall for the Northeast on Saturday
The area of low pressure that had brought thunderstorms to the Southeast will aid in the development of a coastal low. This low will rapidly strength and track northeastward toward the Mid Atlantic and Northeast coastlines. With ample moisture being brought into these regions, moderate to heavy rainfall will spread northward from the Mid Atlantic to the Northeast. This will result in heavy to excessive rainfall across the region as well as gusty winds. Rainfall amounts of 1.5-2.5 inches with locally higher amounts in excess of 3 inches will be possible across the region. This heavy rainfall could lead to an increased risk of flooding and runoff. In addition to this heavy rainfall, strong winds are also forecast across the Northeast, especially along the coastline. With the heavy rainfall saturating the ground, these winds could down trees and power lines across the region.

A Look Ahead
Late into the weekend, an upper level low will move onto the West Coast. This will allow for the development of an area of low pressure in the lee of the Rockies. This low will move northeastward on Monday, allowing for the development of thunderstorms across the High Plains and Upper Midwest. Large hail, damaging winds, and tornadoes will all be potential hazards with any storms that develop. By Tuesday, a dryline will set up across the Plains, bringing a risk for thunderstorms across portions of the Central and Southern Plains.