Thunderstorms will continue for the North Central Gulf of Mexico through early Thursday afternoon. Additional thunderstorms are expected to develop across the Central Plains and Missouri Valley as instability builds throughout the day. A cold front will be the focus for thunderstorm development across the Northern Plains. As these storms move into the Upper Mississippi Valley, there will be a risk for excessive rainfall. A disturbance moving into the Southwest will support the development of thunderstorms across the region.

Continued Thunderstorms Thursday for the North Central Gulf of Mexico
An area of thunderstorms has developed off the coast of Louisiana and is continuing to intensify. Storms are expected to increase in coverage while drifting slowly southward during the morning and into the afternoon. Winds in excess of 40 knots, heavy rain, frequent lightning, heavy rain, and waterspouts will be potential hazards.

Thunderstorms for the Central Plains and Missouri Valley on Thursday
Ongoing storms moving out of the Central Plains and into the Missouri Valley will continue to weaken through the mid-morning hours. Instability will build through mid afternoon, allowing for the development of additional  thunderstorms. Damaging winds and large hail will be the primary hazards, but an isolated tornado cannot be ruled out. Isolated strong storms may continue after sunset. 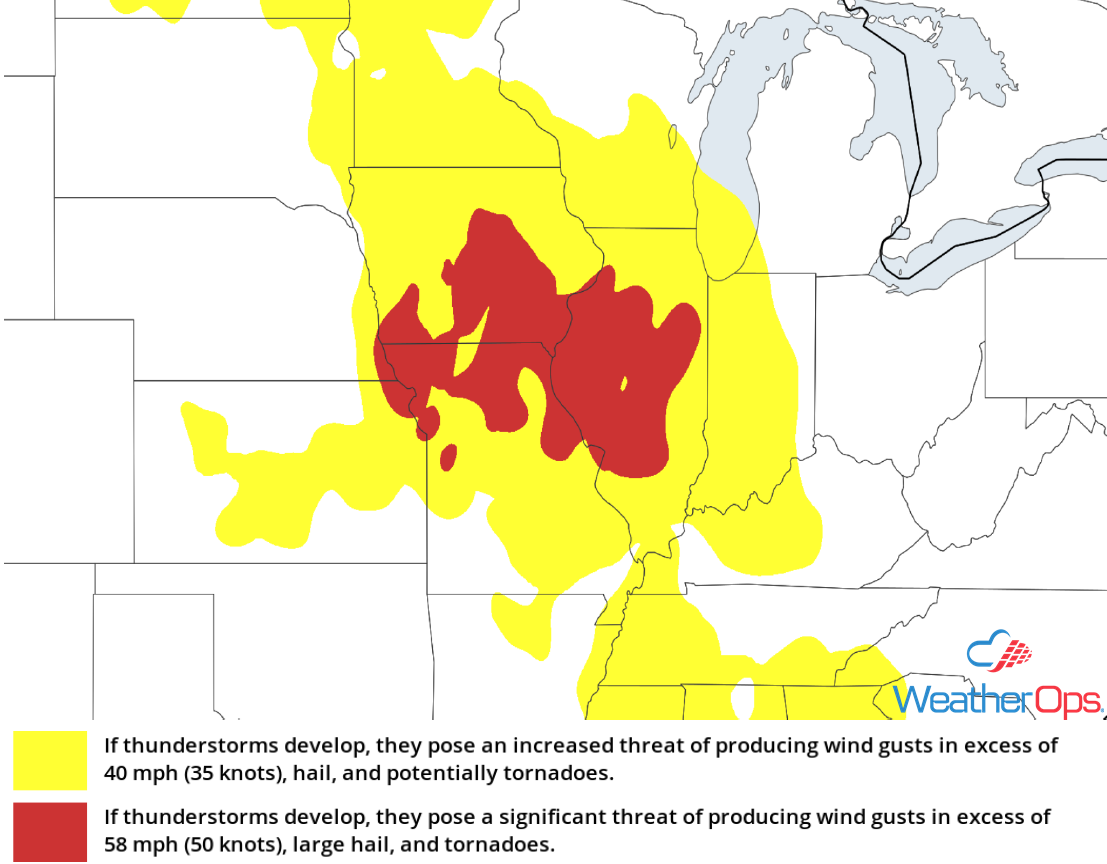 Potential for Thunderstorms Thursday across the Northern Plains
A line of strong to severe thunderstorms will likely develop along an eastward-moving cold front this afternoon through the early evening. Isolated thunderstorms may develop as far west as eastern Montana. Damaging winds and large hail will be the primary hazards with these storms.

Excessive Rainfall for the Upper Mississippi Valley Thursday
A slow moving area of low pressure over the far eastern Dakotas is currently producing scattered showers and thunderstorms that extend into Minnesota. While rainfall rates with the morning activity will decrease, more significant development is anticipated this afternoon. These storms may be heavy, especially across portions of Minnesota, with hourly rainfall rates in excess of an inch per hour. Given the slow movement of these storms, widespread rainfall amounts in excess of an inch are likely with locally heavier amounts in excess of 2.00 inches. This may lead to a threat for flooding in some of the stronger storms. 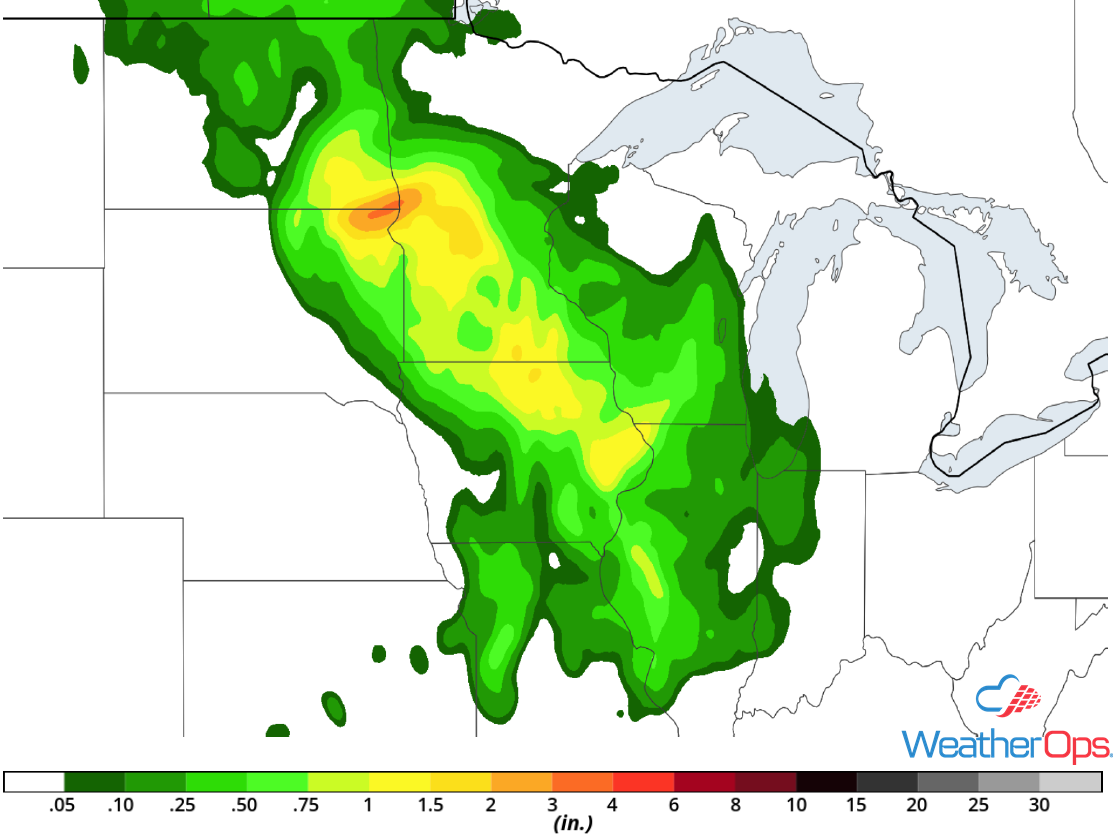 Risk for Thunderstorms Thursday across the Southwest
Weak mid-level disturbances will move westward to the south of a ridge extending into the Four Corners region through this afternoon. These disturbances will aid in the development of thunderstorms across the high terrain during the afternoon. Storms will move westward with strong to damaging winds the primary hazard. 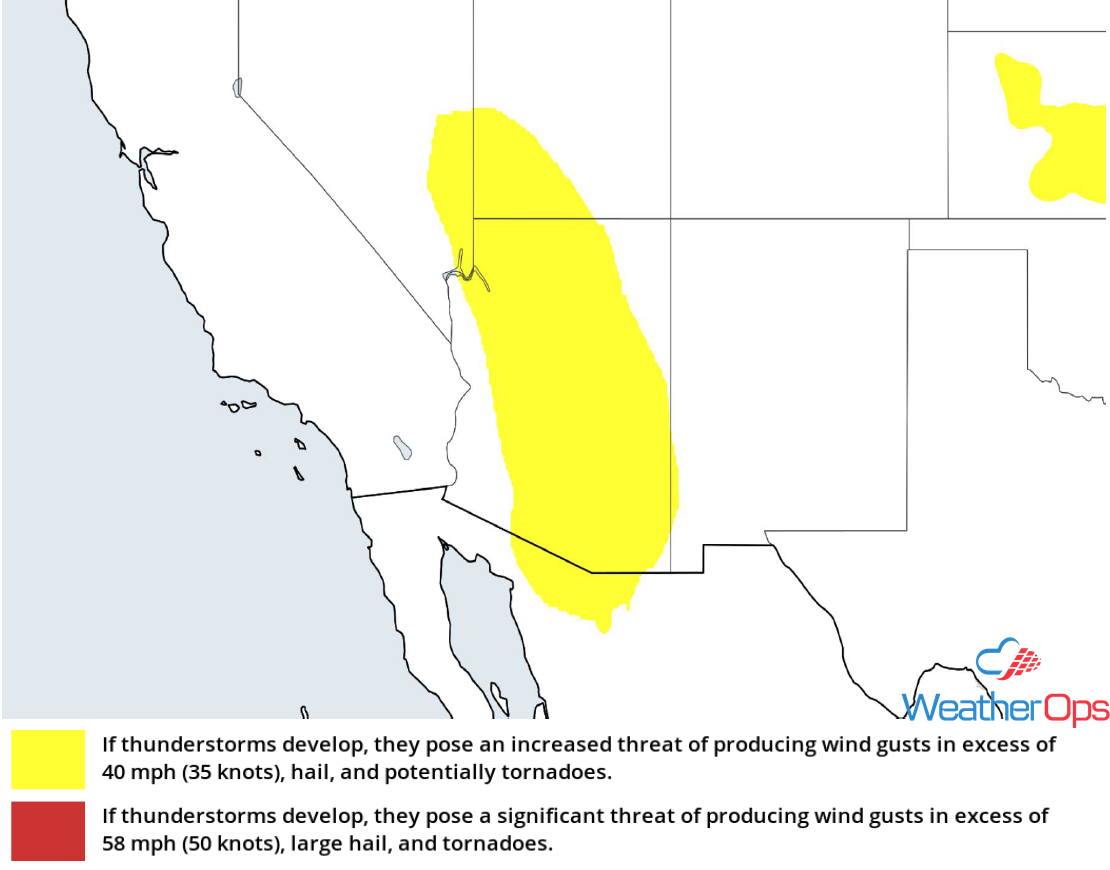 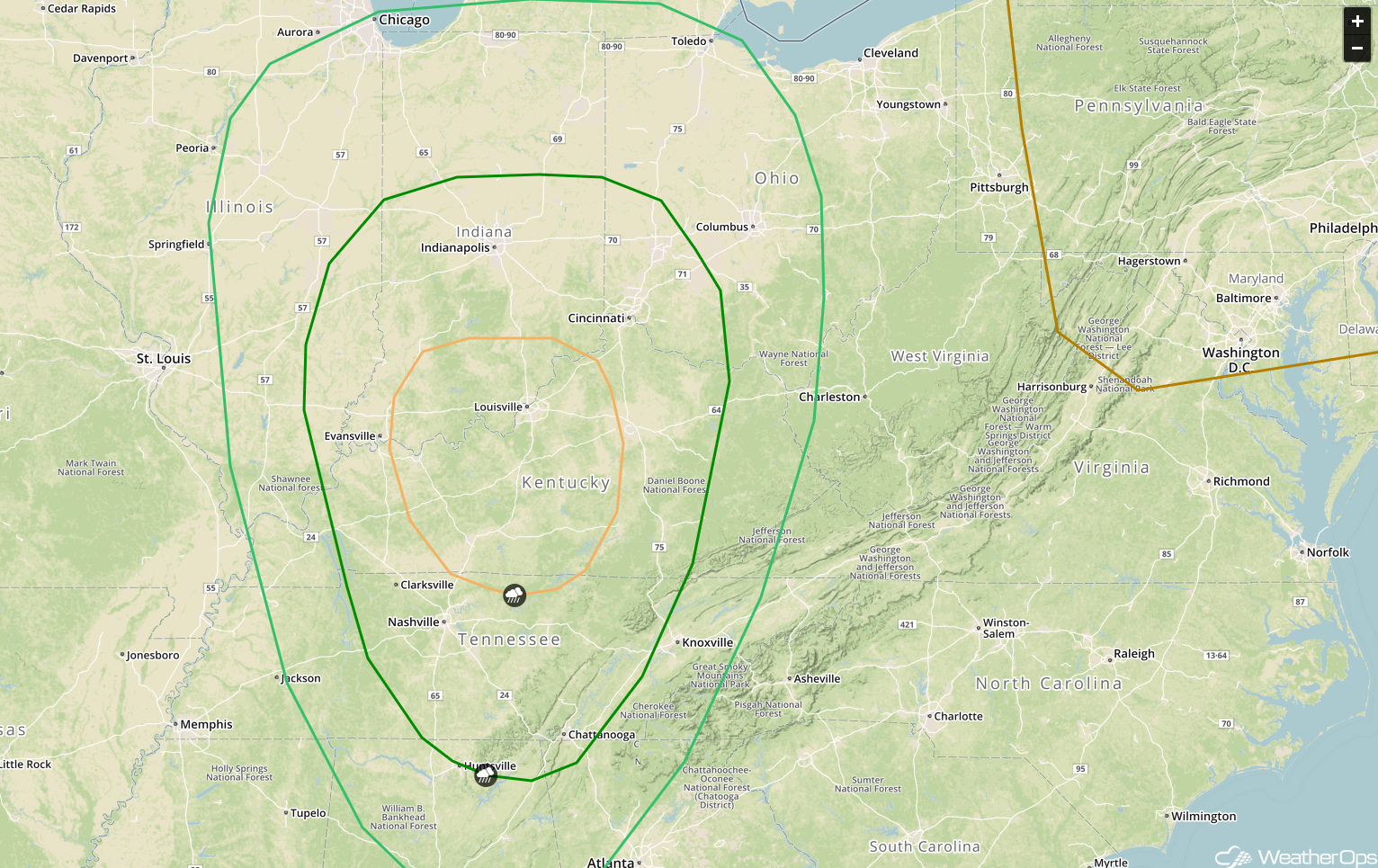 Risk for Excessive Rainfall for the Southern Great Lakes and Ohio Valley Friday
In addition to the thunderstorm potential, there will also be a risk for excessive rainfall across the Southern Great Lakes into the Ohio Valley. Given that some areas may receive multiple rounds of storms along a slow-moving cold front, rainfall totals in excess of 1.50-2.00 inches are forecast. 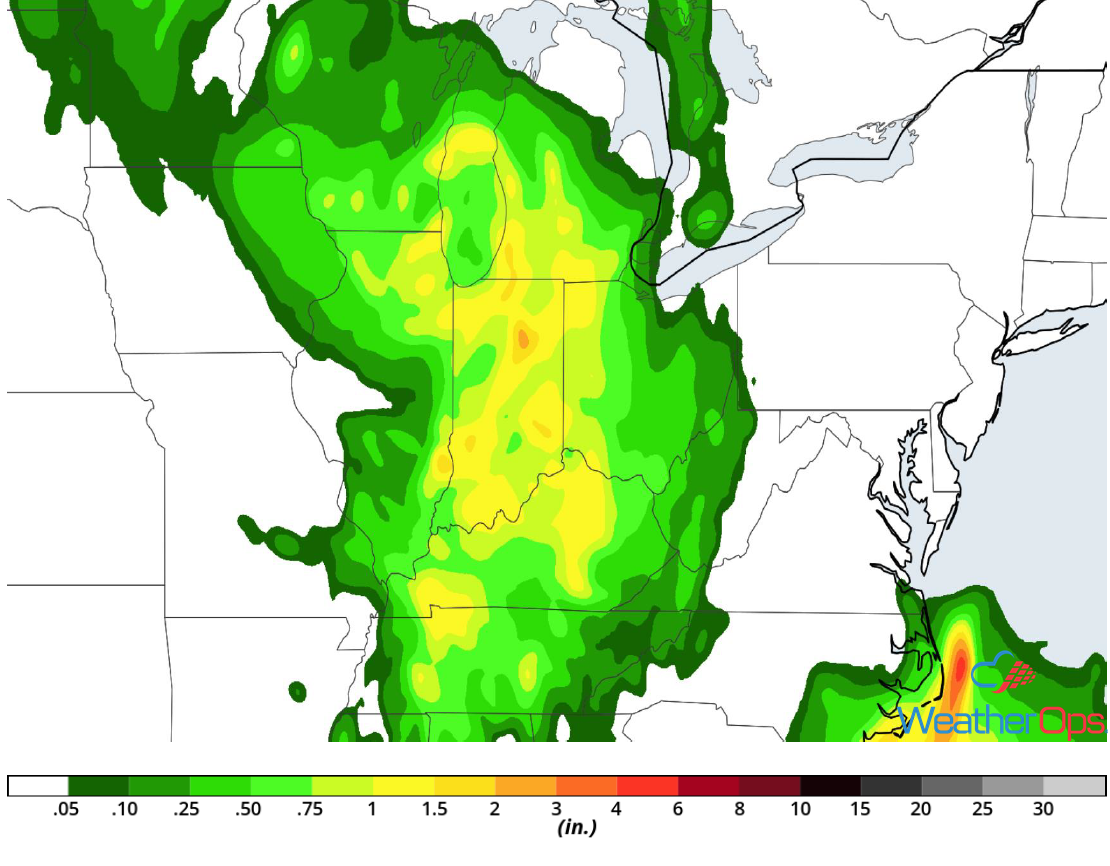 Thunderstorms Saturday from the Appalachians to the Carolina Coast
An upper level trough will enhance daily thunderstorm activity on Saturday. While this disturbance will be weak, it will still produce a few isolated severe storms capable of producing damaging winds. 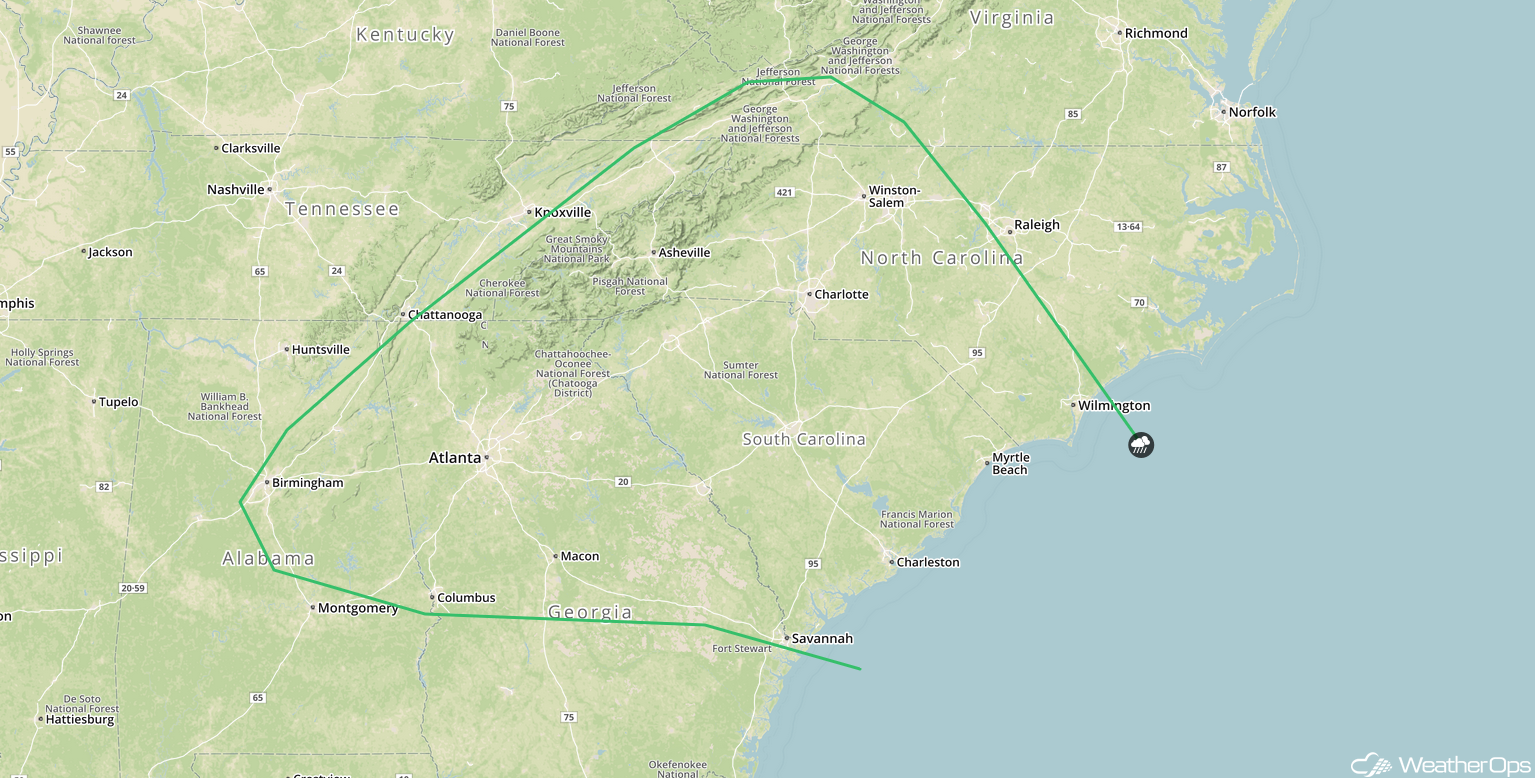