A slow moving cold front is stretched from southeastern Colorado eastward along the Kansas/Oklahoma border and into the Midwest. In the vicinity of the front, a large area of thunderstorms is already ongoing across Kansas. Throughout the day, the existing thunderstorm complex across Kansas will track east or southeast into southwestern Missouri, western Arkansas, and eastern Oklahoma with an associated severe wind and hail threat. Further to the west, additional significant thunderstorm activity is forecast by late afternoon and evening across eastern Colorado, southwest Kansas, the Texas Panhandle, and northwest Oklahoma. This activity is forecast to consolidate into one or more complexes of intense thunderstorms and track southeast. An enhanced threat for severe wind may develop across portions of Oklahoma, should this activity develop and organize as currently expected. Isolated strong to severe thunderstorms may develop across west Texas and far eastern New Mexico this afternoon and evening. The primary concern will be large hail and severe winds from any of the stronger storms.

In addition to the severe weather threat, locally heavy rainfall will be possible over portions of southern Kansas, most of Oklahoma, and central Arkansas as storms move to the south and southeast. Rainfall amounts of 1-3 inches with locally heavier amounts in excess of 4 inches possible.

Scattered to numerous thunderstorms are forecast today from the lower Mississippi Valley northeastward into the Mid Atlantic ahead of an advancing front. As of this morning, clusters of thunderstorms are ongoing over Arkansas and western Tennessee, as well as west-central Kentucky. These clusters of storms will continue to move east and southeast today, resulting in an enhanced threat for severe weather along and ahead of them. Further to the northeast, from Ohio into eastern Kentucky into the mid-Atlantic, the threat for severe weather will be more isolated. Scattered thunderstorms will develop across Region 2 this afternoon and persist through the evening hours while advancing eastward. If the storms in this region are able to become better organized than currently expected then the threat for severe winds would increase. 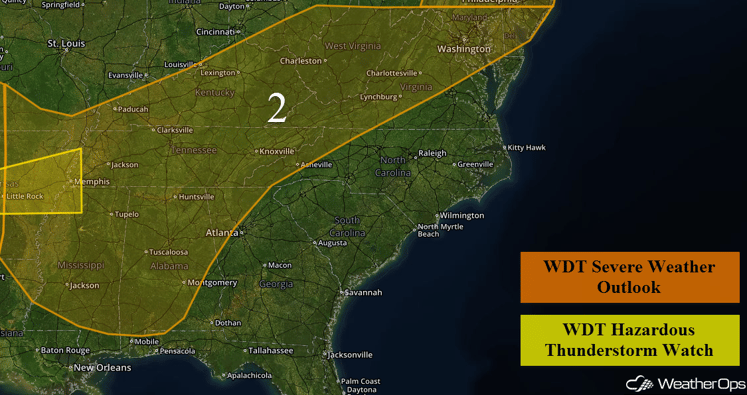 Scattered to numerous thunderstorms are expected to develop and spread northeast across Region 3 today as a disturbance lifts northeastward across New England. Current indications are that thunderstorm activity will increase quickly later this morning from Central Pennsylvania and Central New York before organizing into one or more lines of strong to severe thunderstorms. The severe weather threat today should peak during the afternoon hours. Large hail and damaging winds will be the primary concerns, but an isolated tornado cannot be ruled out. 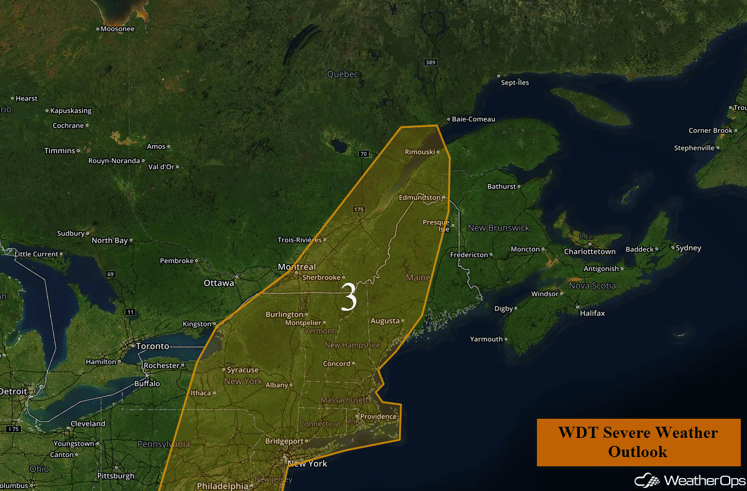 Thunderstorms may develop in the High Plains Friday afternoon as moist unstable air moves upslope. The primary hazards with these storms will be large hail and damaging winds. These cells may form large clusters of storms and then move east and southeast throughout the evening.

Further to the east, a weak upper level system moving over the mid-Mississippi Valley and Tennessee Valley could generate isolated strong to severe thunderstorms for northern Arkansas and southern Missouri into the Tennessee Valley. These storms would form in the afternoon hours and persist into the evening. The major threat with these storms would be damaging winds.

Rainfall amounts of 1-2 inches, with locally heavier amounts in excess of 3 inches will be possible, especially in locations that receive multiple rounds of thunderstorms.

An area of low pressure will form in the lee of the Rockies in response to an upper level trough. This will pull moist air northward into the region. Storms should form during the mid to late afternoon. Favorable shear profiles should lead to the development of supercell thunderstorms, with large hail and damaging winds possible. These storms could cluster during the evening hours as they move to the east and southeast, with damaging winds being the primary threat. 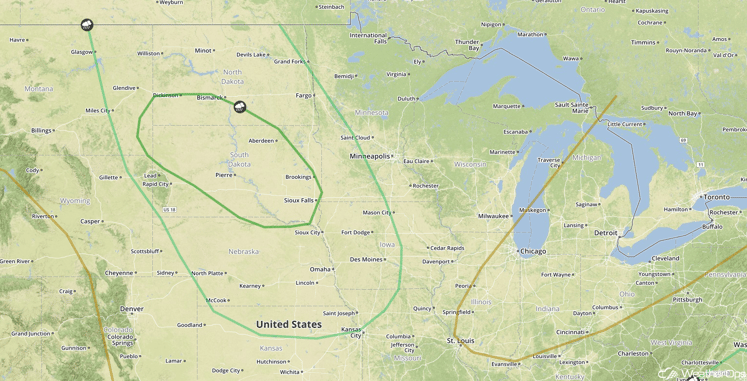 Slow moving showers and thunderstorms are expected to develop across the Mid Atlantic region ahead of a weak upper level system. These storms should begin to develop in the afternoon hours in a moist airmass brought in by south to southeasterly winds. Rainfall amounts of 1-2 inches with locally heavier amounts in excess of 3 inches will be possible.