Thunderstorms are expected to develop Thursday from the Arklatex to the Gulf Coast as an area of low pressure moves eastward. This same system will produce snow across central and northwest Texas. A series of upper level lows will bring snow to the Northern Cascades through Saturday. Elevated winds and seas are likely across the Gulf of Mexico through Saturday as a cold front moves eastward.

Thunderstorms from the Arklatex to the Gulf Coast on Thursday
There will be a potential for severe thunderstorms across the Arklatex region this afternoon and evening as instability and wind shear increase across the region. Large hail, strong to severe winds, and an isolated tornado or two will be potential hazards. As the area of low pressure and cold front move eastward during the overnight hours, thunderstorms may continue from Louisiana into the Florida Panhandle through the early morning hours on Friday.

Snow Thursday for Central and Northwest Texas
A strong cold front is expected to bring strong winds to much of the Southern Plains on Thursday; temperatures are expected to steadily decrease throughout the day into tonight. Winds could gust in excess of 50 mph in some areas. Across Northwest Texas, temperatures are expected to fall to near freezing later this evening and tonight. With the presence of an intensifying upper level low over Texas, numerous showers are forecast, which should transition to a rain/wet snow mix later this evening. While temperatures may stay just above freezing, snow may still accumulate. Accumulations of 1-3 inches with locally higher amounts in excess of 4 inches are expected. Snow should come to an end early Friday.

Potential for Snow across the Cascades through Saturday
An active weather pattern will remain across the Northwest for the next several days with a series of upper level lows forecast to dig across the region through next week. This will bring several rounds of moderate to heavy snow to the higher elevations of the Cascades. Snow accumulations in excess of a foot are expected through Saturday. In addition, strong winds will produce whiteout conditions within the heavier snowbands. In the lower elevations, snowfall amounts will range 1-3 inches through the weekend. 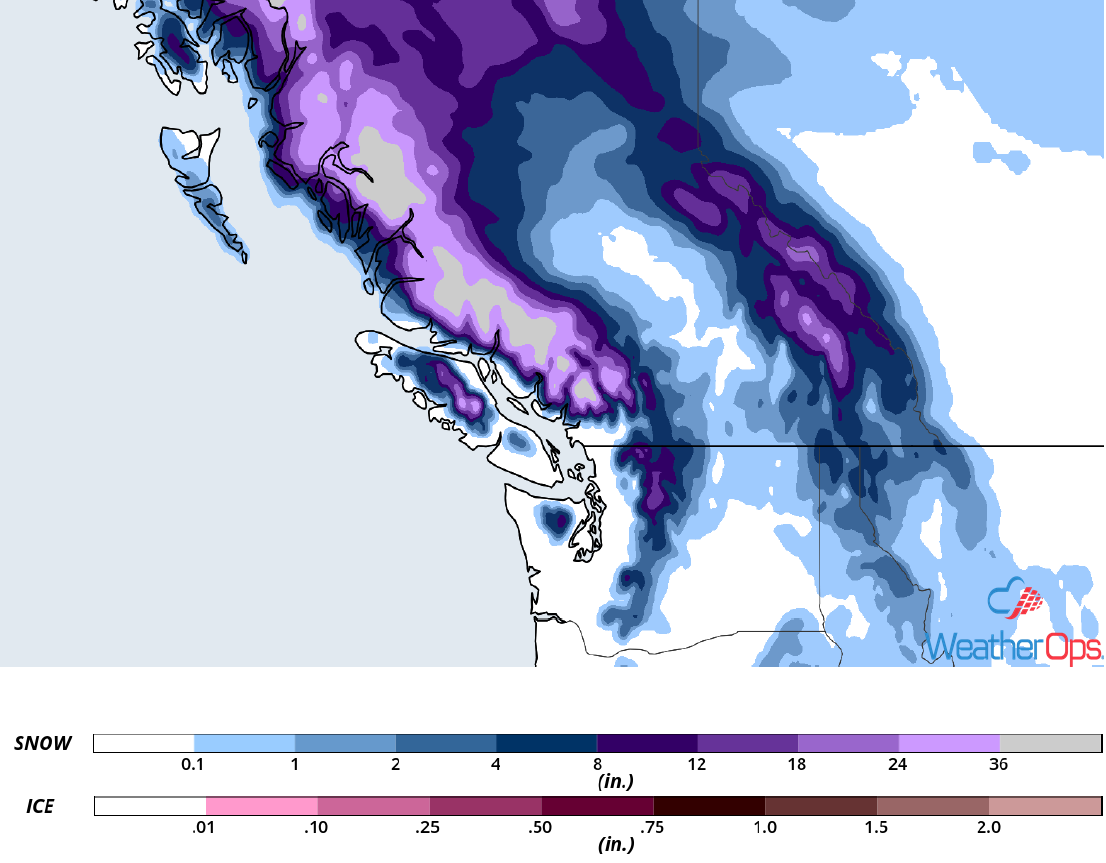 Elevated Winds and Seas through Saturday for the Gulf of Mexico
A cold front will continue to progress eastward across the Gulf of Mexico through Saturday, producing elevated winds and seas. Winds will be southerly at 20-30 knots ahead of the front; behind the front, winds will be westerly to northwesterly at 30-40 knots with gusts in excess of 50 knots. Seas will range 5-10 feet near the shore and 15-20 feet in the deeper waters. In addition, there will be the potential for strong thunderstorms capable of producing wind gusts in excess of 60 knots and frequent lightning. 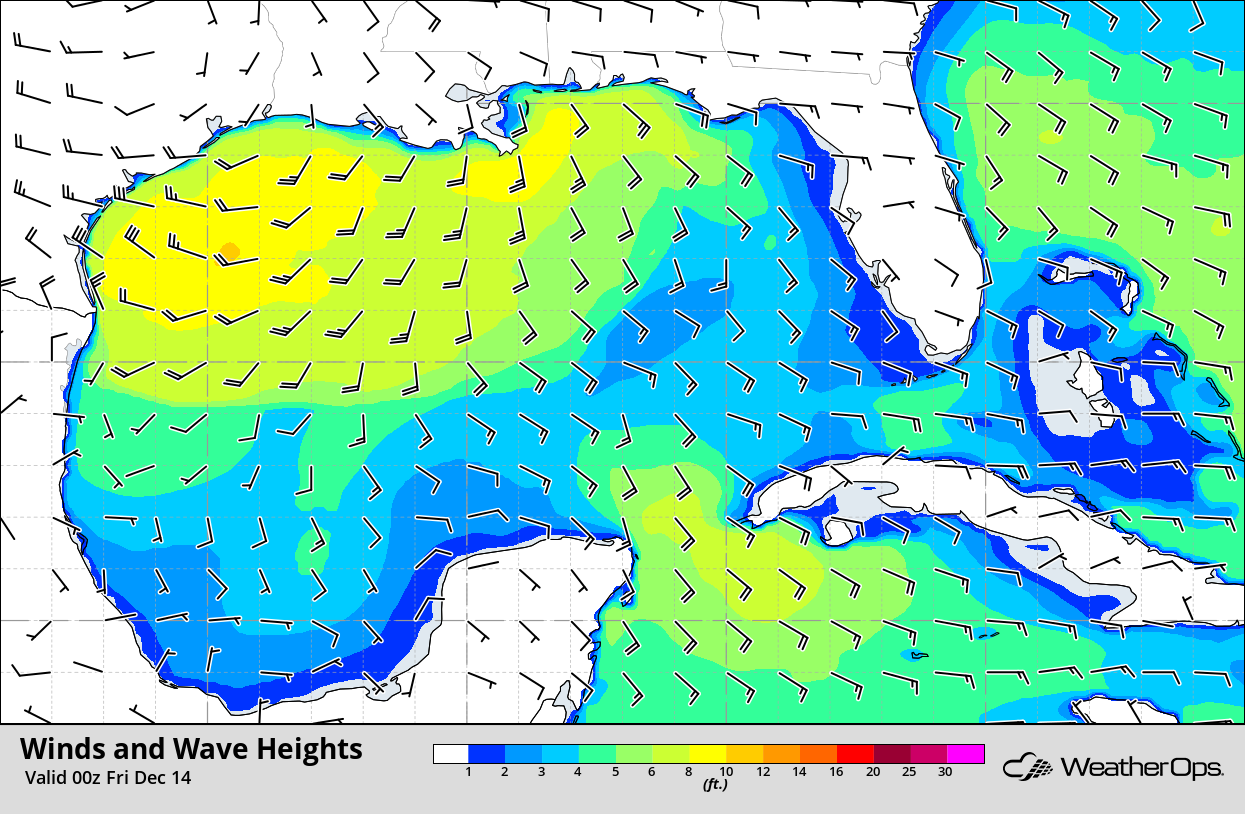 Thunderstorms for Florida on Friday
The system responsible for the thunderstorm potential on Thursday will continue to track eastward on Friday. Thunderstorms are expected to develop along and ahead of the associated cold front. Damaging winds will be the primary hazard with these storms, but there will be a low risk for hail and a brief tornado. Depending on the timing of the front, severe winds may persist into early Saturday morning. 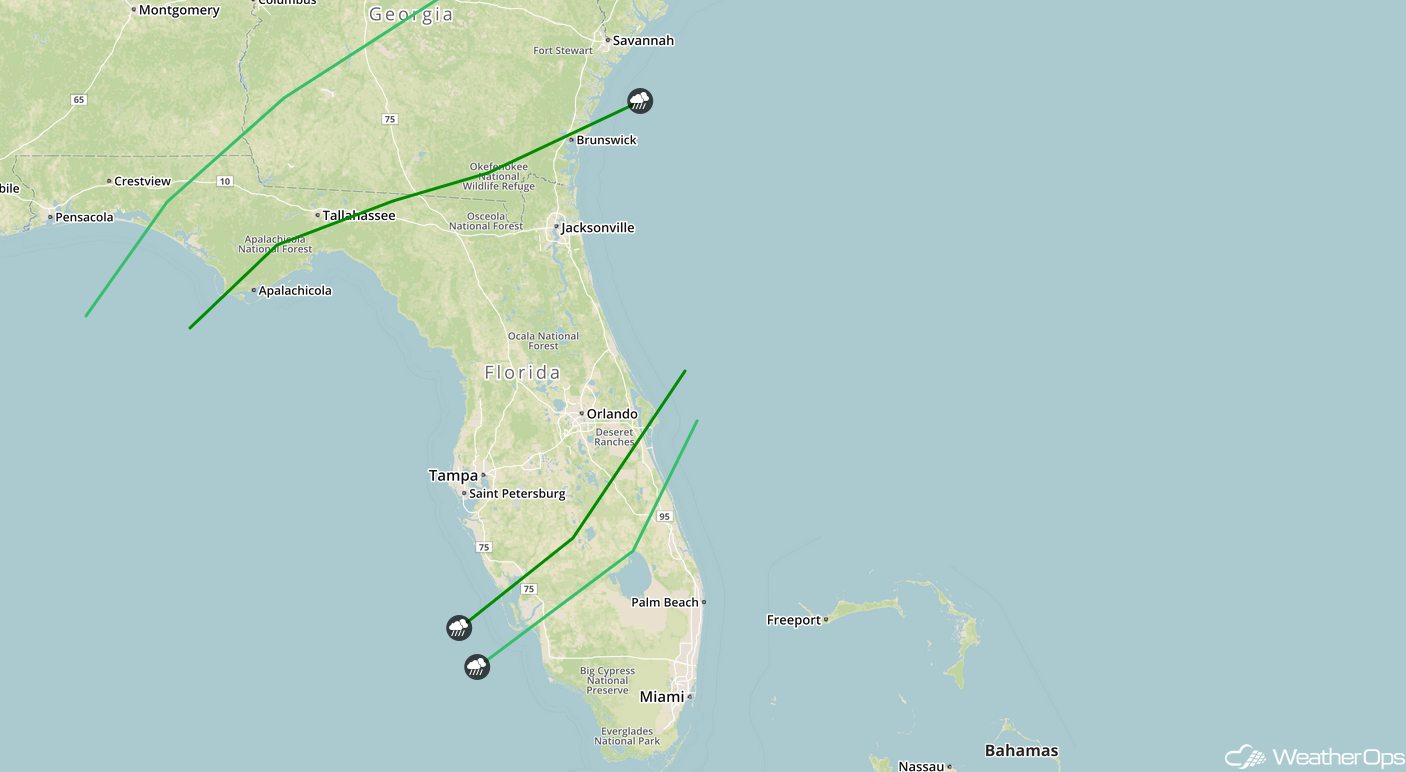 Excessive Rainfall Friday from Northern Florida into the Carolinas
As the cold front described above continues to move eastward, there will be the potential for excessive rainfall from Northern Florida into the Carolinas. Rainfall amounts will range 1-3 inches with locally higher amounts in excess of 4 inches. This may lead to areas of flooding and local runoff.

A Look Ahead
Snow will continue across the Cascades on Sunday as an area of low pressure continues to move eastward. By Monday, snow will move into the Sierra Nevadas. Light snow is forecast across the Northeast Monday and Tuesday. Showers and thunderstorms may develop Wednesday across portions of Texas.