Tropical Storm and Hurricane Conditions across the Western Gulf of Mexico Thursday through Saturday
Tropical Storm Harvey has intensified over the last few hours. Tropical  storm force conditions can be expected over the western Gulf of Mexico with winds 35-50 knots and gusts to 70 knots. Wave heights will range 16-20 feet due to combination of tropical storm force winds and swells. Harvey is expected to intensify to a Category 1 hurricane within 36 hours. Tropical storm conditions should begin Thursday morning and develop northwestward, ending after the storm moves inland on Saturday. Maximum tropical force winds of 60 knots can be expected with winds decreasing to the west. Winds may increase to 75 knots just before landfall with gusts to 90 knots. Seas of 12-16 feet are expected. By early Sunday, seas should subside to 7-10 feet.  Along the upper Texas coast, winds 25-35 knots with gusts to 40 knots are expected in addition to seas of 12-18 feet and squalls. Further east along the Louisiana coast, winds of 20-25 knots with gusts in excess of 30 knots are expected in addition to seas of 10-14 feet. 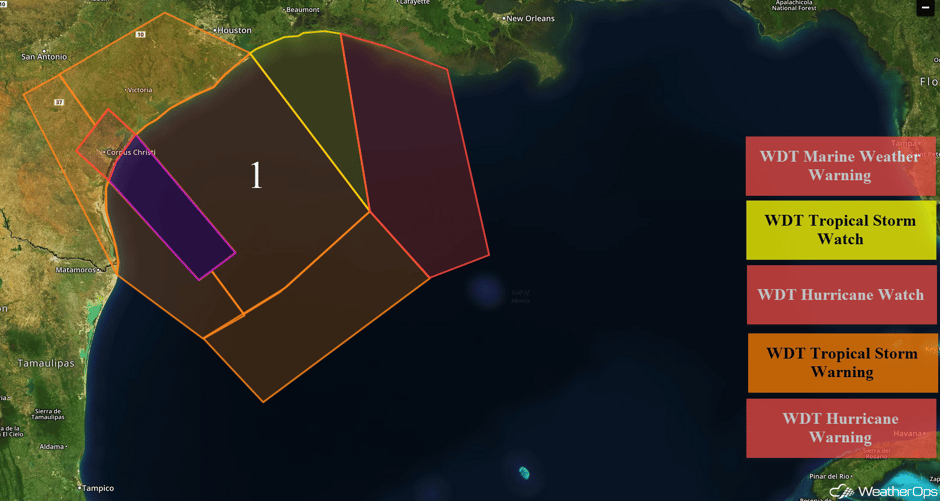 Thunderstorms for the Northern Plains on Thursday
A few weak upper level trough are forecast to pass through the region leading into the afternoon and evening hours leading to some instability across the Central Plains. As a result, strong to severe thunderstorm development will be possible in the afternoon and evening. Strong wind gusts and large hail will be a possibility within some thunderstorms with frequent lightning and heavy rain.

Excessive Rainfall for the Southwest on Thursday
A stalled front will promote shower and thunderstorm development across portions of New Mexico and far West Texas today. Rainfall amounts of 0.50-1.00 inch with locally higher amounts are forecast. Flooding issues may occur, especially for locations that have received heavy rainfall over the past few days. 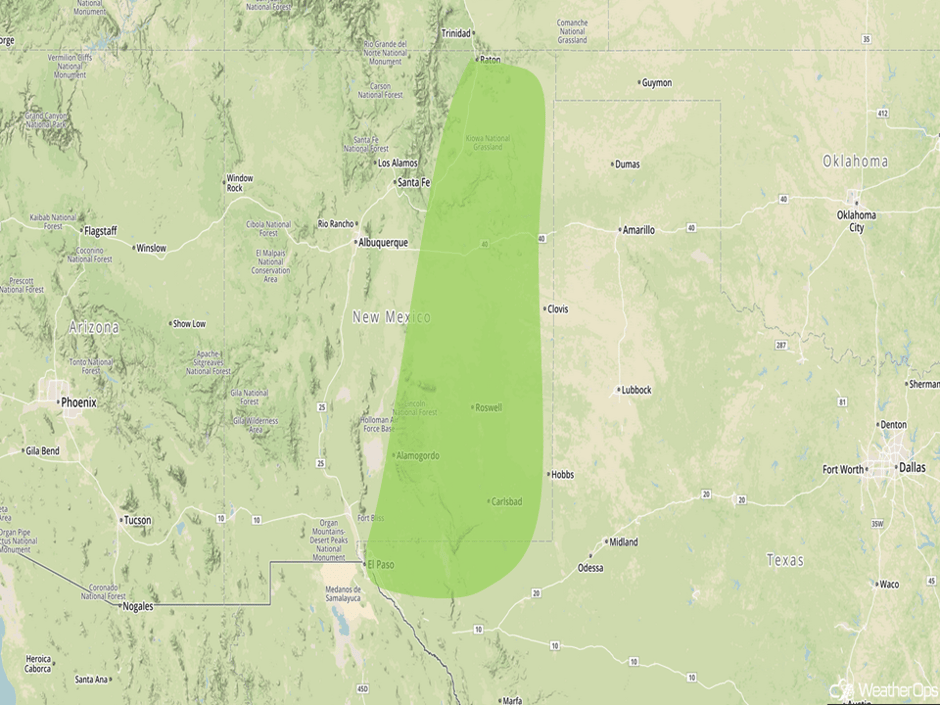 Potential for Excessive Rainfall Thursday across South Florida
Tropical moisture associated with Invest 92L will allow for scattered to widespread showers and thunderstorms across much of South Florida today. There may be a risk for excessive rainfall, with general amounts of 1-2 inches and locally higher amounts in excess of 3 inches. 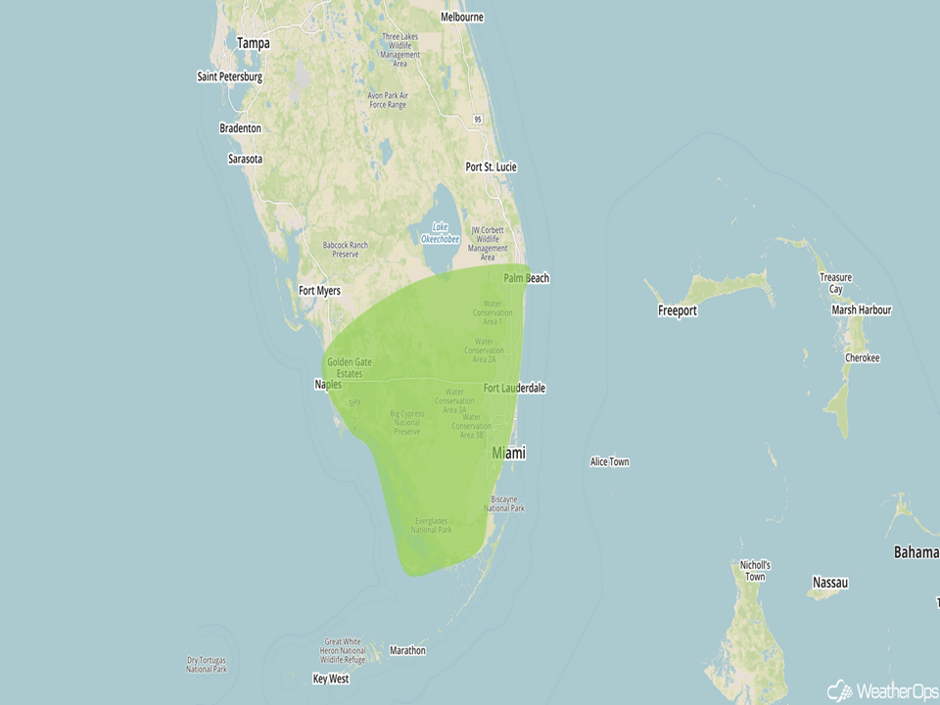 Excessive Rainfall Risk for the Western Gulf Coast on Friday
Tropical Storm Harvey is forecast to make landfall in South Texas on Friday. While damaging winds, a few tornadoes, and storm surge will all be potential hazards, there will likely be a widespread excessive rainfall threat across much of coastal Texas into southwest Louisiana. Widespread 24 hour totals of 1-3 inches are expected with higher amounts in excess of 5 inches near the landfall point. 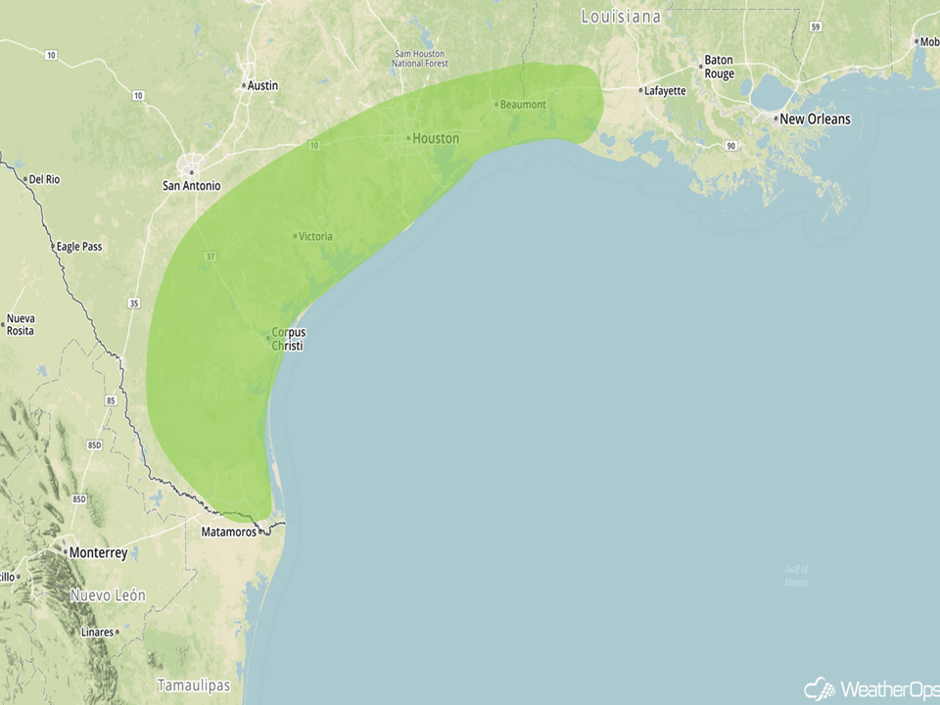 Thunderstorm Potential Friday for the Northern Plains
As an area of low pressure develops in the vicinity of a frontal zone, isolated to scattered thunderstorms may develop across the Northern Plains. Storms will develop during the afternoon and evening with gusty winds the primary hazard. 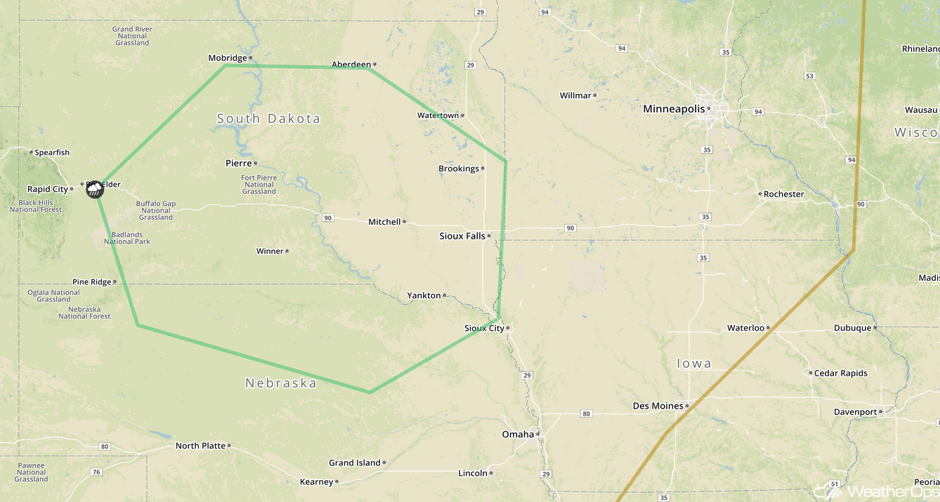 Risk for Excessive Rainfall for the Western Gulf Coast and South Texas on Saturday
As Tropical Storm Harvey moves further inland on Saturday, periods of excessive rainfall will continue along the western Gulf Coast and also a bit further inland. Widespread rainfall amounts of 1-3 inches are expected with much higher amounts near the center of Harvey. Some strong to severe thunderstorms capable of producing gusty winds and tornadoes will be possible as well. 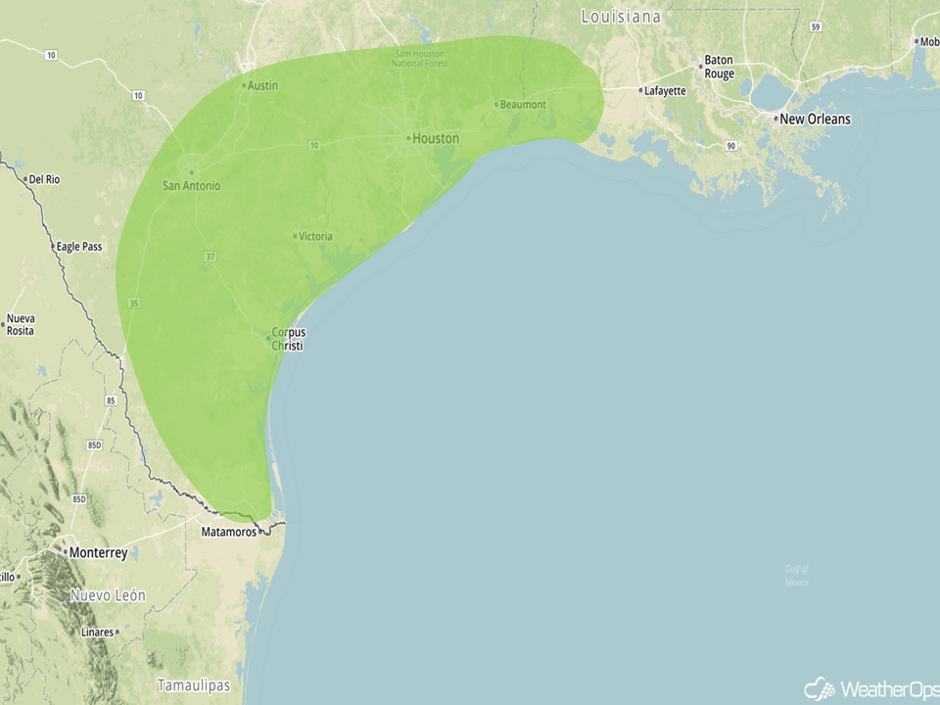 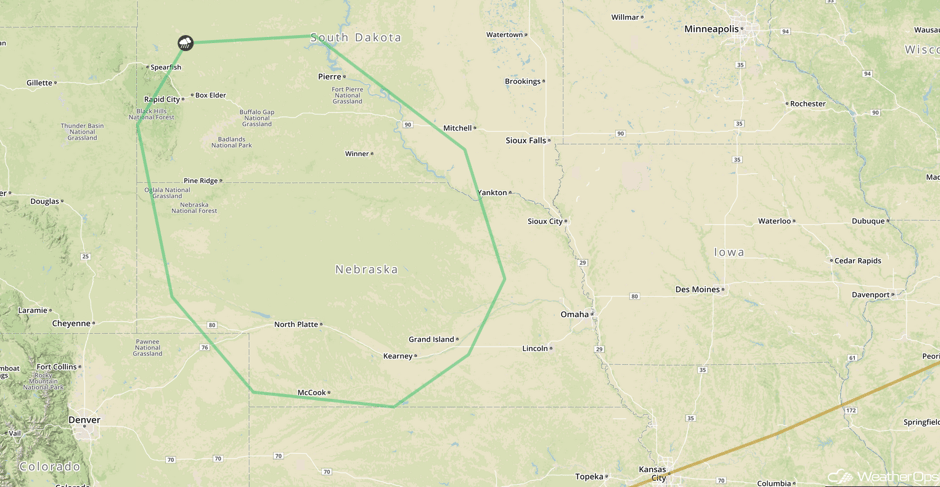 Tropical Update
Tropical Storm Harvey (red oval) is continuing to move toward the north-northwest at 10 mph with a turn toward the northwest expected later today. Harvey's forward speed is expected to decrease over the next few days. Harvey is expected to become a hurricane by Friday and will approach the middle Texas coast late Friday or early Saturday then stall through the weekend. Rainfall amounts of 12-20 inches are expected with locally higher amounts to 30 inches, creating the potential for life threatening flash flooding.

A trough of low pressure (green oval) near the coast of Florida continues to produce disorganized showers and thunderstorms across the Bahamas, southern Florida, and adjacent waters. Development, if any, should be slow to occur over the next day or two. Regardless, heavy rain and flooding will be possible over Florida during the next few days. 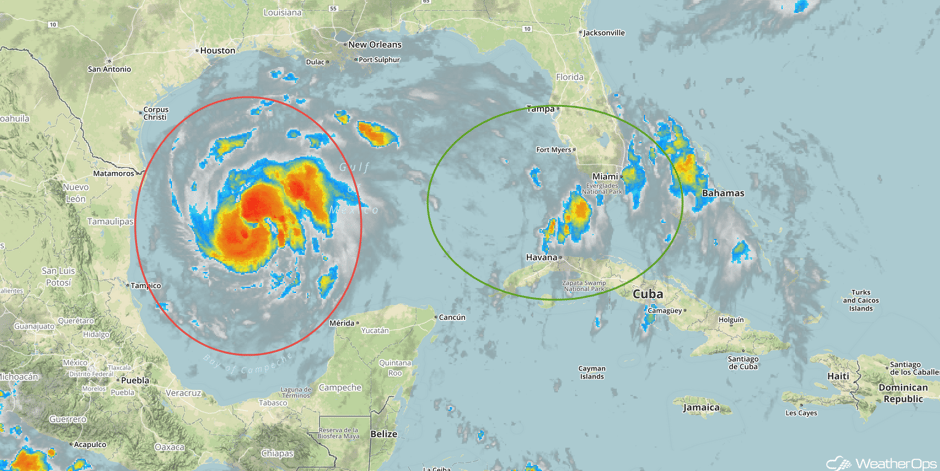 A Look Ahead
Tropical Storm Harvey is still expected to bring significant rainfall impacts to the western Gulf Coast region and adjacent inland locations across South Texas and southern Louisiana. There may be some associated rainfall today, most of the heavier rains should hold off until Friday when Harvey makes landfall. After landfall, weak steering currents will cause Harvey to meander of South Texas and allow for a prolonged multi-day excessive rainfall threat to the Outlook area. Storm total rainfall amounts from Friday through Tuesday could reach 10-15 inches, locally 20+, and will likely lead to a significant increase in flooding potential.