There is a potential for isolated to scattered thunderstorms Thursday from the Southeast into the Mid Atlantic ahead of a cold front. A developing area of low pressure will aid in the development of thunderstorms across the Southern Plains Thursday.

Strong to Severe Thunderstorms Possible for the Southern Plains on Thursday
An area of low pressure is forecast to develop during the afternoon hours in the lee of the Rockies and slowly track eastward. Even with this low providing ample forcing, with minimal instability and marginal moisture across the region, only scattered showers and isolated strong to severe thunderstorms will develop this afternoon and quickly track eastward this evening. Damaging winds will be the primary hazard with any stronger storms. This activity will diminish during the overnight hours.

Potential for Thunderstorms Thursday from Southeast to Mid Atlantic
A cold front extending from the Great Lakes to the southeast will continue to track eastward throughout the day. As this occurs, instability will increase ahead of the front as a result of daytime heating. With strong wind shear and modest instability, scattered showers and thunderstorms will increase along and ahead of the front this afternoon and evening. The primary hazard with any storms that develop will be damaging winds, but isolated tornadoes cannot be ruled out. Activity will diminish during the overnight hours. 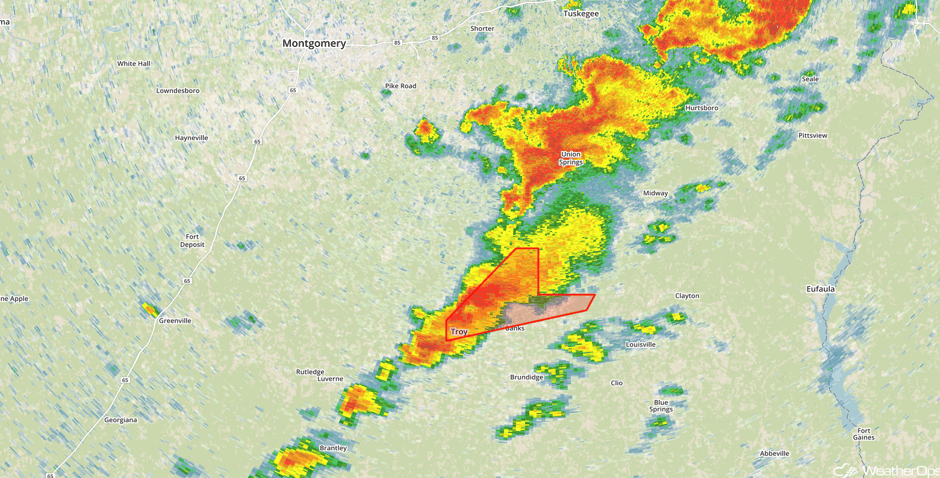 Update 1:54pm EDT: Tornado Watch for much of Central Georgia until 8pm EDT. 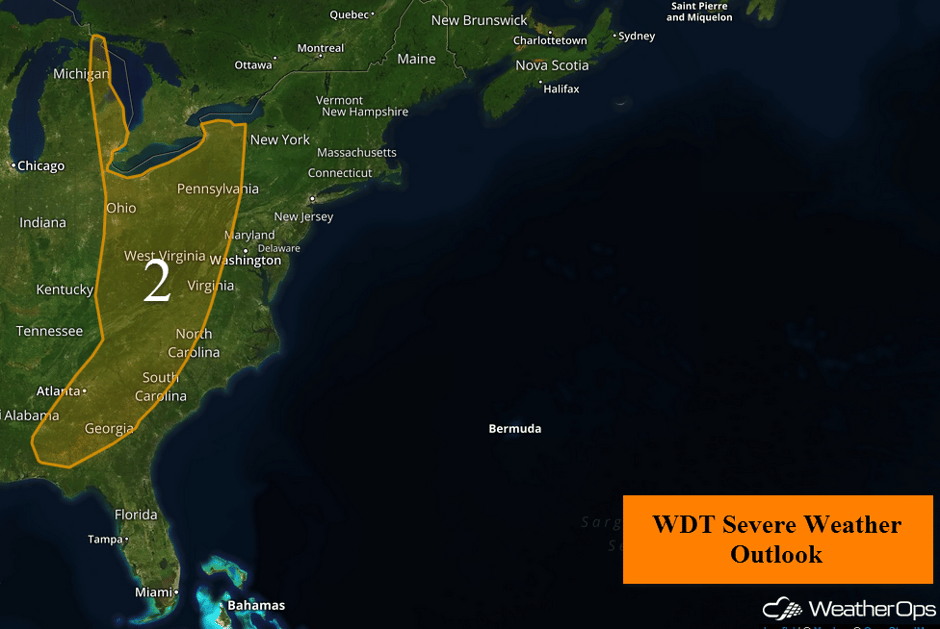 Severe Thunderstorms Expected Friday from the Southern Plains into the Mid-Mississippi Valley
Widespread severe thunderstorms are expected across a large area from West Texas into the Ohio Valley on Friday. A warm front will extend northeastward from a low over the Southern Plains, and a dryline should develop to the south. South of the warm front and east of the dryline, the moist air will become quite unstable during the day due to daytime heating. Thunderstorms are expected to develop during the late afternoon and evening along and north of the warm front and will increase in coverage and intensity.

In addition to the severe weather, the potential for relatively widespread flooding will begin Friday evening from southeast Oklahoma, across the Ozarks, and into the middle Mississippi Valley. Training thunderstorms and multiple rounds of heavy rainfall will be possible. Rainfall amounts of 2-4 inches with isolated higher amounts in excess of 5 inches can be expected leading to flash flooding.

Severe Thunderstorms Expected across East Texas into Central Arkansas Saturday
The threat for severe weather will only slightly shift eastward on Saturday, with the best chance for widespread severe storms being from central Arkansas into eastern Texas. An intensifying area of low pressure will move over the Plains into the Mississippi Valley during the day, with an attendant warm front moving north across the Ozarks into the Ohio Valley and a cold front pushing through Texas. Activity will continue for much of the day and evening along the warm front with flooding and damaging winds the primary hazards. Over Arkansas into Texas, extremely warm and unstable air will be in place by the afternoon. Thunderstorms are expected ahead of the front. Large hail, damaging winds, and tornadoes will all be possible with these storms.

In addition to the severe weather, flash flooding will be a major concern. Rainfall amounts of 3-5 inches with isolated higher amounts of 6 inches, mainly from extreme southeastern Oklahoma northeastward across northwestern Arkansas, southern Missouri, and central Illinois, are expected. Many areas will receive multiple rounds of thunderstorms between Friday and Saturday, bringing two day rainfall totals over 10 inches in some areas, especially over the Ozarks. However, most areas will see only a few inches of rain. Flash flooding is likely and river flooding may be a concern.

A Look Ahead
As the area of low pressure described above continues to intensify on Sunday, it's cold front will continue to progress eastward. Thunderstorms may develop ahead of the cold front from southern Illinois and Indiana southward across western Tennessee and Kentucky through Mississippi. Large hail, damaging winds, and tornadoes will all be potential hazards with these storms.

Elsewhere, snow may develop on the backside of the low across western Kansas on Sunday. While there is some uncertainty in amounts, some locations may see an inch or two.