Thunderstorms are expected Thursday from the Southern Plains to the Ohio Valley ahead of a cold front. In addition to the thunderstorm risk, there will also be a potential for flash flooding late Thursday night into early Friday morning.

Severe Thunderstorms Expected Thursday from Southern Plains to Ohio Valley
A slow moving cold front will provide a focus for thunderstorm development across the region today and tonight. Thunderstorms have already developed across portions of Missouri but will likely increase in coverage across the Mid-Mississippi Valley and near the front by the afternoon and evening as instability increases. Further west across the Southern Plains, thunderstorm activity is mainly expected to develop after sunset as the front stalls. Some strong to severe thunderstorms can be expected for the entire region today and tonight with large hail the primary hazard. Gusty winds may also develop with some of the more organized activity. Heavy rainfall may also become a concern, especially by early Friday morning. Rainfall amounts of 1-2 inches with locally higher amounts in excess of 3 inches are forecast.

Across the Ohio Valley and Northeast, some thunderstorms may develop, but cloud cover may limit overall instability. If thunderstorms are able to develop, large hail, damaging winds, and tornadoes will be possible.

Update 2:16pm EDT: Severe Thunderstorm Watch in effect until 8pm EDT for portions of Indiana, Michigan, and Ohio. Main hazards will be hail to 1.5 inches and damaging winds to 70 mph. 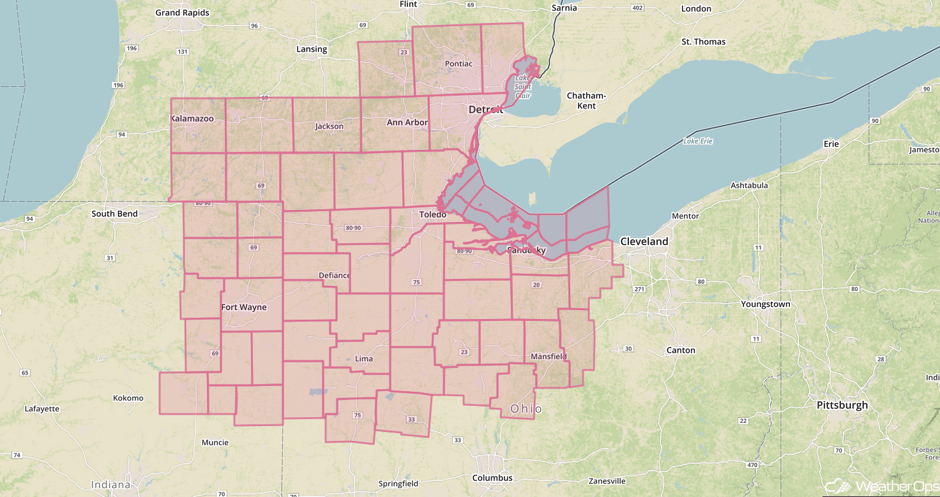 Potential for Strong to Severe Thunderstorms from Southern Plains into the Ozarks on Friday
The severe weather threat will continue across central and eastern Oklahoma into the Ozarks on Friday. Thunderstorms will likely be ongoing across the region from the overnight activity and is expected to clear out of Oklahoma by mid to late morning. A developing area of low pressure over the Texas Panhandle will help lift a warm front into Oklahoma and southern Missouri during the afternoon. Scattered showers and thunderstorms will develop across the region during the afternoon and persist into the evening. Confidence is low regarding the exact placement of the warm front and thunderstorm development, but activity should be near the I-44 corridor. Large hail, damaging winds, and tornadoes will all be possible with these storms. 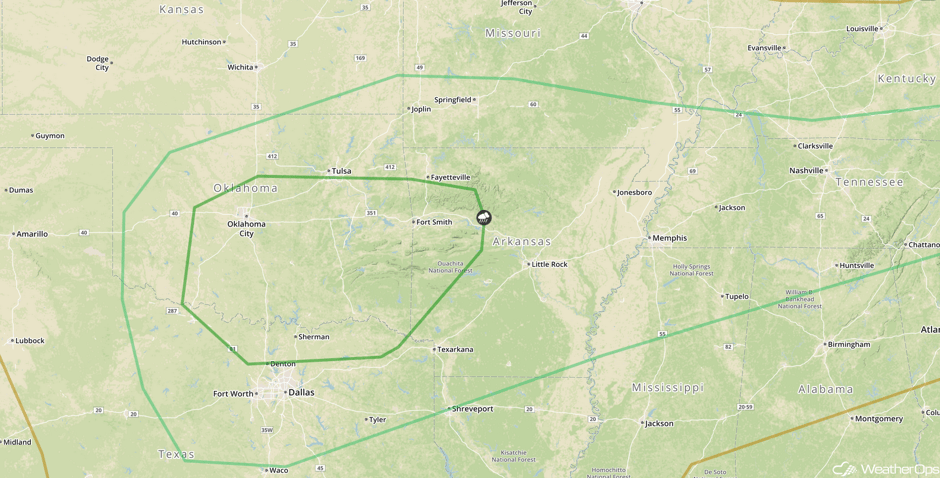 Excessive Rainfall Possible for Ozarks on Friday
There will be a threat for excessive rainfall leading to flash flooding across northeast Oklahoma into the Tennessee Valley on Friday, where showers and thunderstorms are expected to persist for much of the day into the overnight hours. Intensity will increase during the evening as an area of low pressure tracks through Oklahoma, leading to rainfall totals in excess of 4 inches across the threat region. Flash flooding will likely occur in some areas. 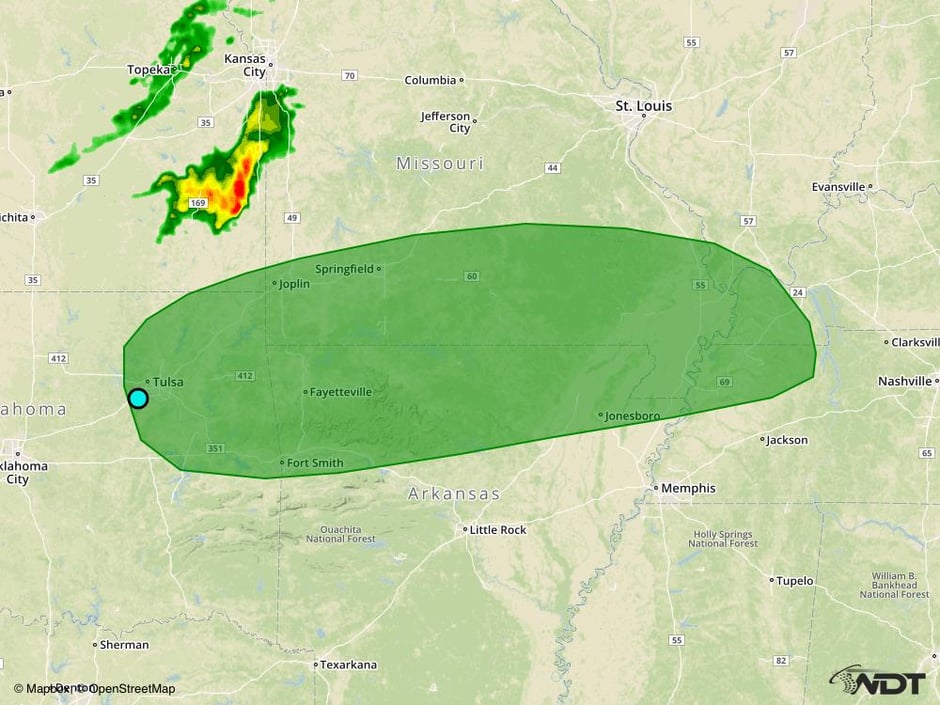 Strong to Severe Thunderstorms from Lower Mississippi Valley into Mid Atlantic on Saturday
The severe weather threat will shift into the Gulf Coast and Mid Atlantic on Saturday as an area of low pressure continues to track eastward into the Mississippi Valley. Scattered thunderstorms will be possible along an associated cold front moving through Arkansas into the Gulf Coast, with primary hazards being large hail, damaging winds, and tornadoes. From eastern Tennessee into the Mid-Atlantic region along a stalled frontal boundary. Primary hazards within this activity will be strong winds and large hail.

Excessive Rainfall Potential for Tennessee Valley on Saturday
There will be a chance for excessive rainfall across portions of the Tennessee Valley into the Appalachians on Saturday as a frontal boundary stalls across the region. With plentiful moisture expected to be in place, the stalled frontal boundary will be the focus for widespread showers and thunderstorms persisting for much of the day and evening. Rainfall accumulations of 1-2 inches with locally higher amounts in excess of 3 inches are expected. 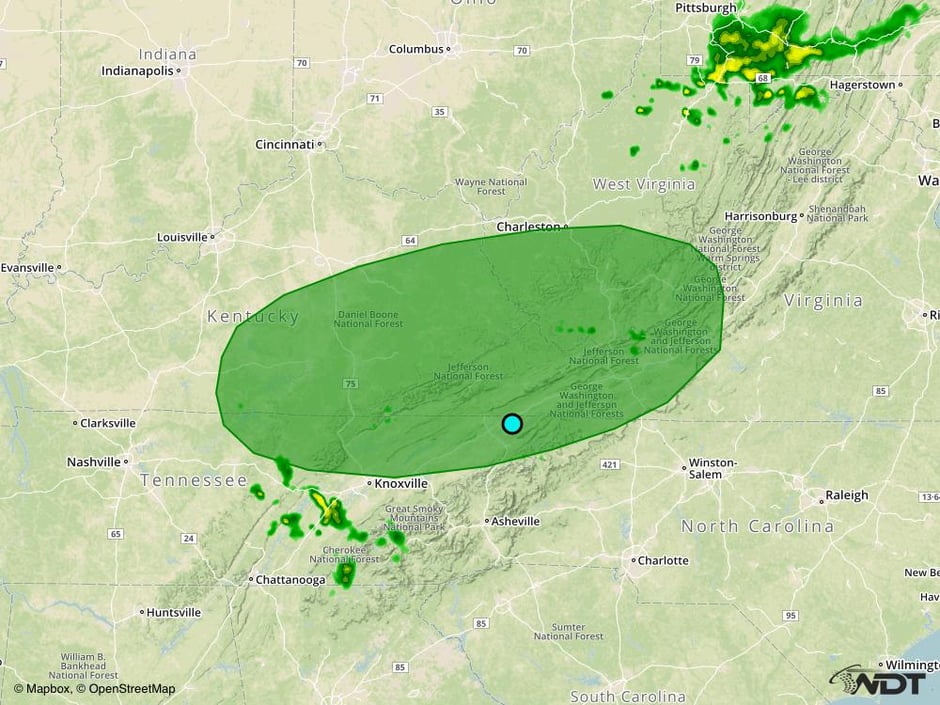 A Look Ahead
As an area of low pressure continues to track through the eastern US, there will be the potential for strong to severe thunderstorms from the Mid Atlantic to Florida on Saturday. Strong winds and large hail will be the primary hazards with these storms.