Excessive Rainfall for the Central Appalachians and Northeast on Monday
Showers and thunderstorms associated with Tropical Depression Florence are forecast to spread from the central Appalachians and Mid Atlantic into the Northeast. Tropical moisture will allow for areas of excessive rainfall to develop. Widespread rainfall amounts of 1-3 inches with locally higher amounts in excess of 5 inches are expected, leading to an increased or continued risk for flooding. Significant flash flooding and river flooding can be expected over central North Carolina northward into southern Virginia. The rain activity should begin to taper off and move out of the region overnight. 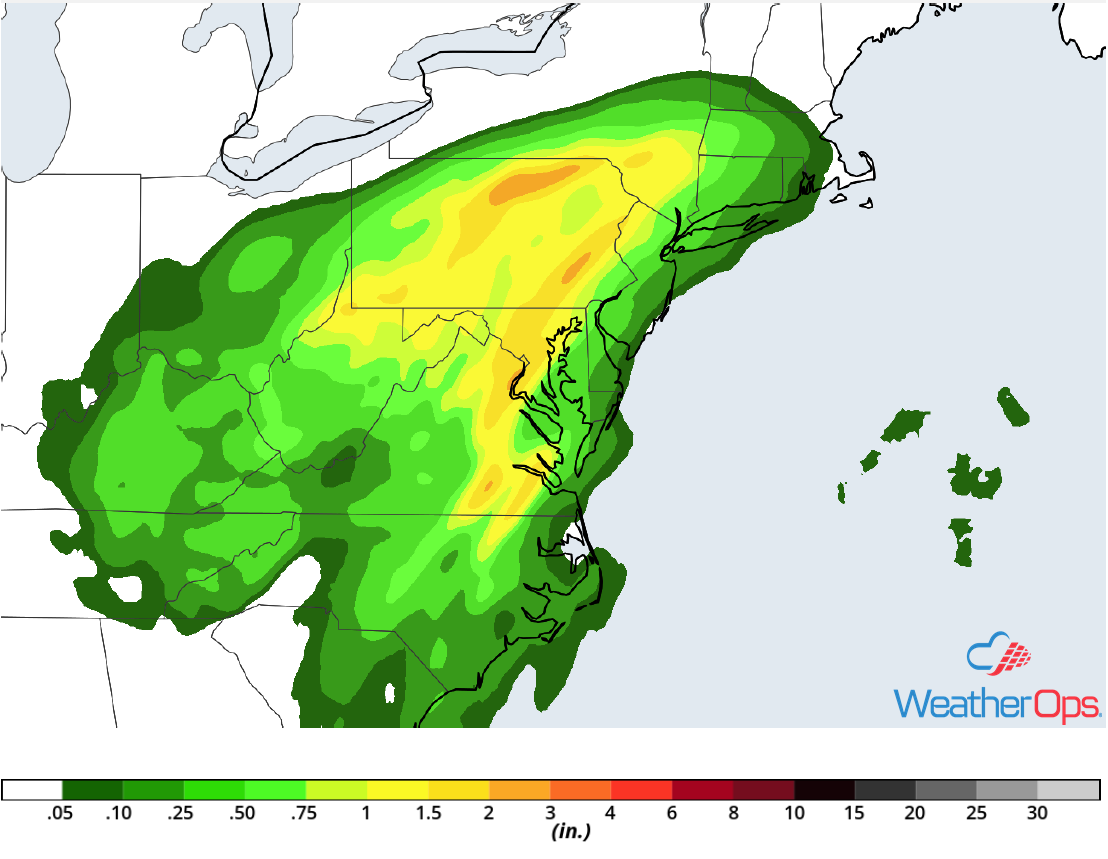 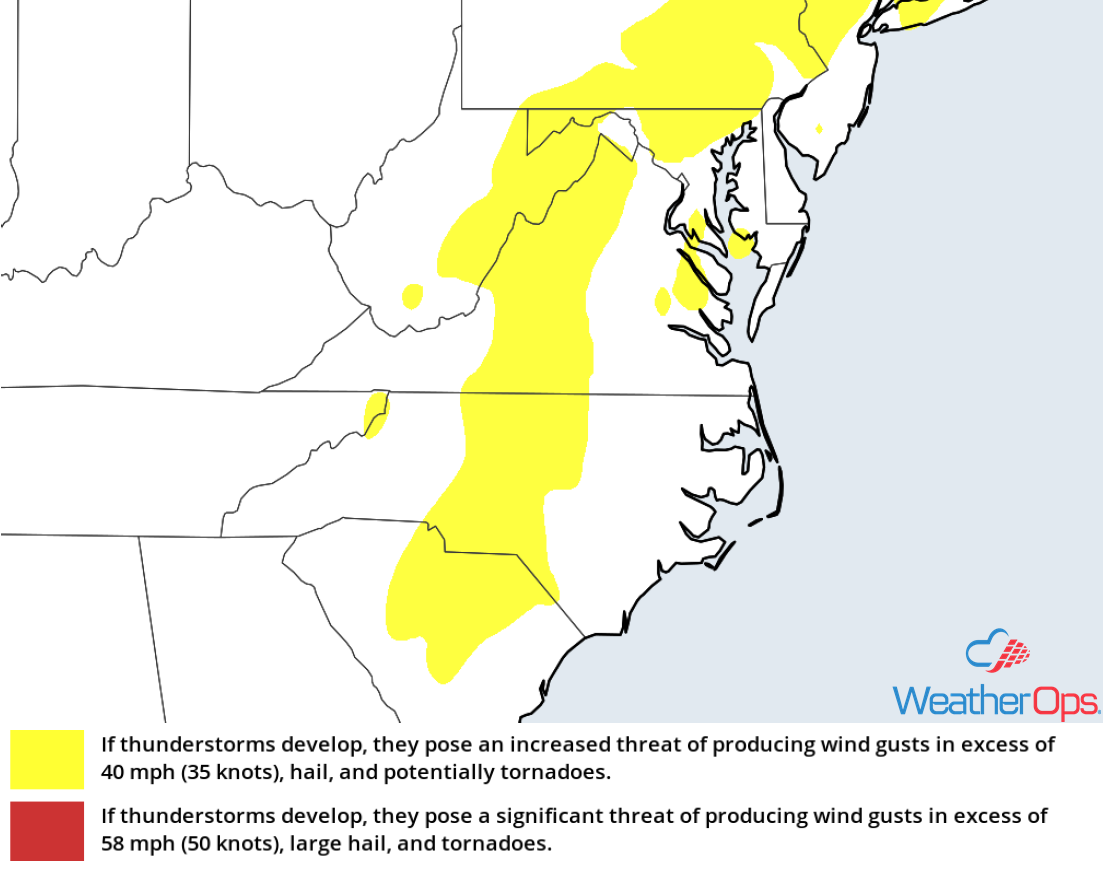 Risk for Thunderstorms across the Upper Midwest on Monday
An area of low pressure and associated cold front tracking eastward through the Upper Midwest will bring a potential for thunderstorms across the region this afternoon and evening. An upper level disturbance will provide support for the development of strong to severe thunderstorms. Gusty winds and hail will be the primary hazards with these storms. Activity should weaken by mid to late evening. 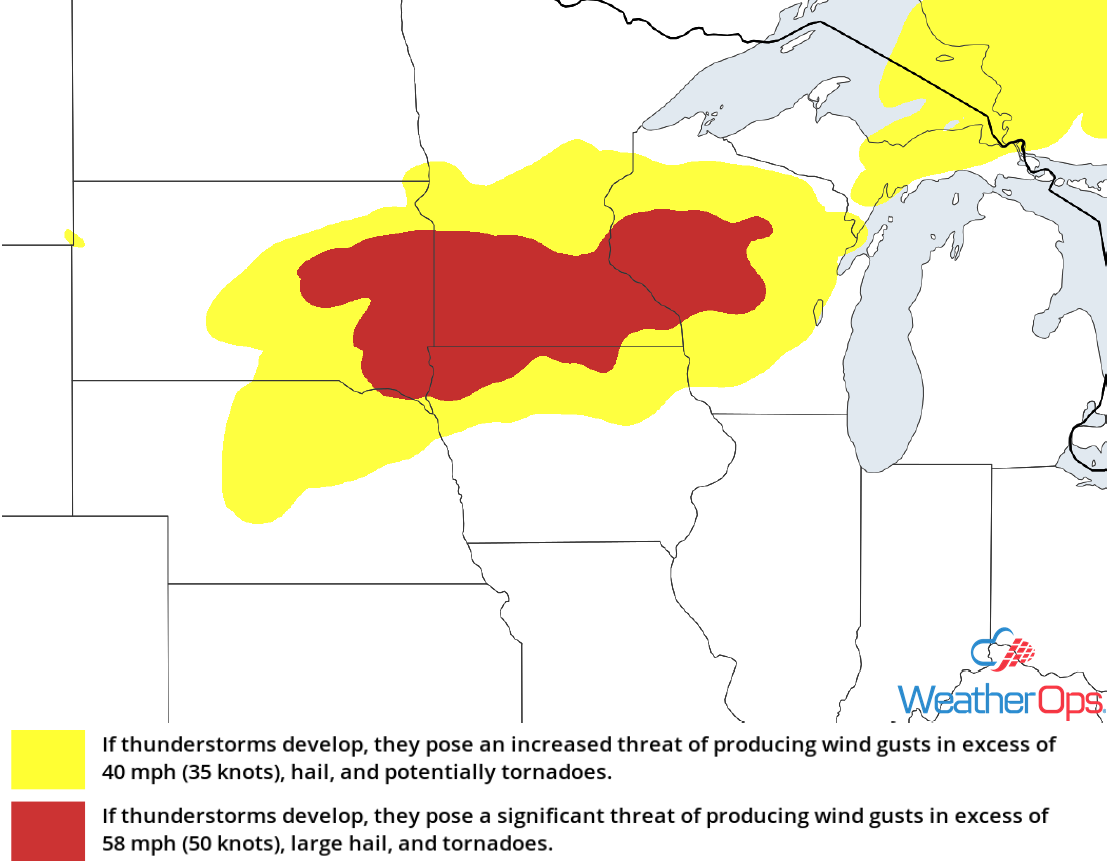 Potential for Excessive Rainfall through Wednesday for the Upper Midwest
Several rounds of showers and thunderstorms are forecast over the next few days across portions of the Upper Midwest along a stalled front. With deep moisture spreading into the region, there will be a risk for excessive rainfall, especially for areas receiving heavy rain every day through Wednesday. Three day rainfall totals of 2-4 inches with locally higher amounts in excess of 5 inches are expected, leading to an increased risk of flooding. 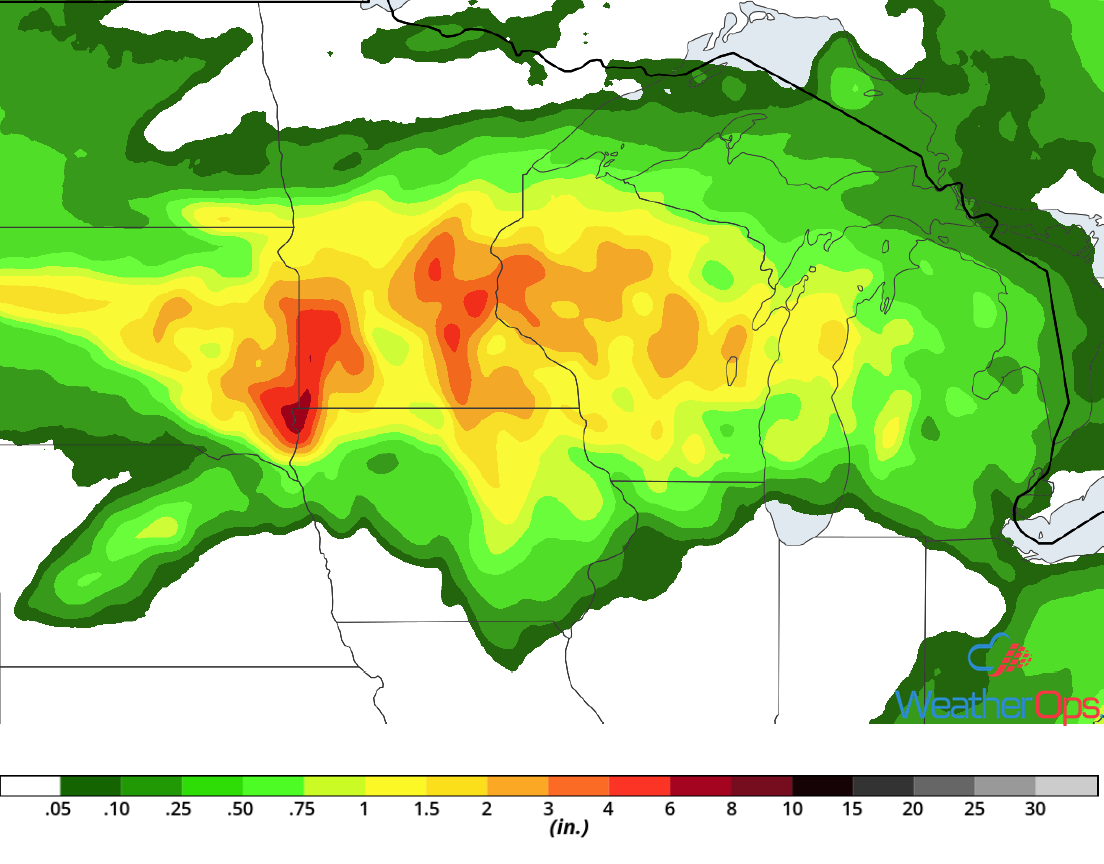 Excessive Rainfall for Southern New England on Tuesday
Tropical Depression Florence or its remnants will move through New England on Tuesday before moving offshore late in the day. As it moves through the region, widespread showers and thunderstorms are expected throughout the day. Rainfall amounts of 1-3 inches and locally higher amounts in excess of 4 inches are expected. This will contribute to an increased risk for flooding. 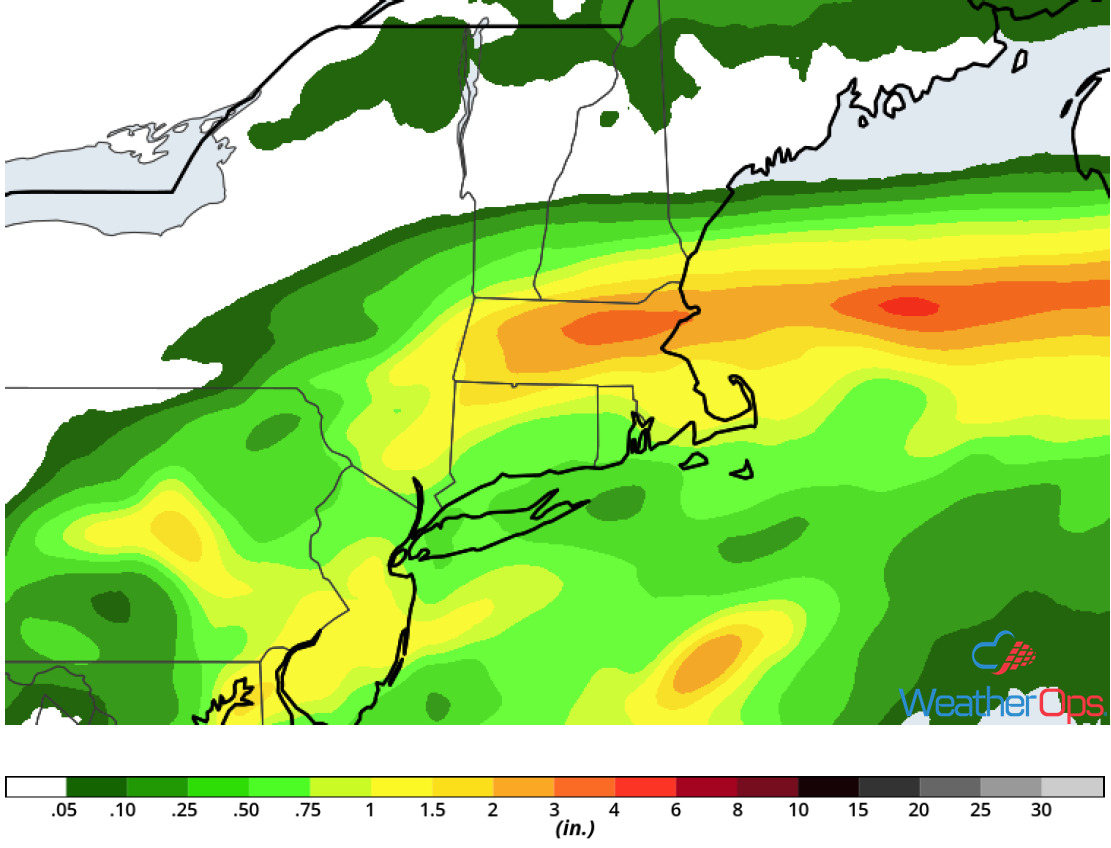 Tropical Update
Tropical Depression Florence (green oval) is 240 miles southwest of Charlottesville, Virginia and is moving northeastward at 15 mph. Maximum sustained winds are near 25 mph with higher gusts. The depression is expected to become extratropical later today. Little change in strength is expected until the low moves into the western Atlantic by early Wednesday.

Tropical Depression Joyce (blue oval) is 285 miles south-southwest of the Azores and is moving east-southeastward at 8 mph. This forward speed is forecast to continue while turning toward the southeast today, south on Tuesday, and southeast on Wednesday. Maximum sustained winds are near 35 mph with higher gusts. Some weakening is expected during the next 48 hours and Joyce is expected to become a remnant low tonight or Tuesday.

A weak area of low pressure associated with the remnants of Isaac (red oval) is located just south of Jamaica. Showers and thunderstorms are currently limited, and any development should be slow to occur over the next day or so. By Wednesday, environmental conditions are forecast to become less conducive for re-development when the system moves toward the Yucatan Peninsula. Regardless of development, locally heavy rains and gusty winds are forecast over portions of Hispaniola, Jamaica, and eastern Cuba during the next couple of days while the system moves westward to west-northwestward across the northwestern Caribbean. 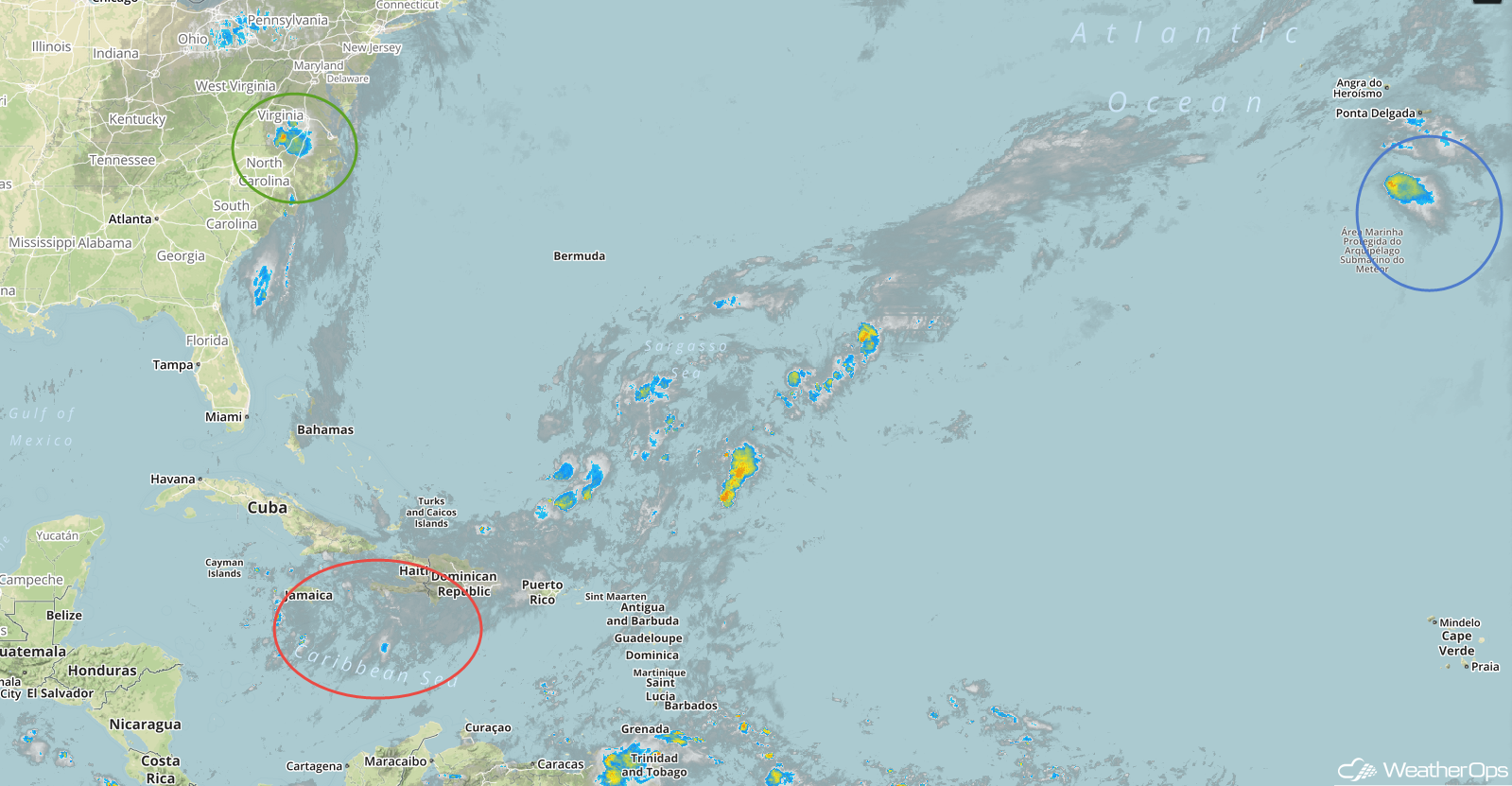 A Look Ahead
Showers and thunderstorms will extend from the Great Lakes to the Central Plains on Thursday ahead of an area of low pressure and cold front. Across the Southern High Plains, thunderstorms may develop late Friday as an area of low pressure moves out of the Rockies. This system will move northeastward on Saturday, bringing the potential for heavy rain to portions of the Plains and Midwest. By Sunday, this activity will move into the Great Lakes.