Michael has become a hurricane and is moving northward toward the western tip of Cuba. Thunderstorms will continue across the Central Plains through Tuesday along a stalled front. This activity will have the potential to produce excessive rainfall. Snow will continue from Wyoming into the Dakotas through Tuesday as an area of low pressure moves northeastward. 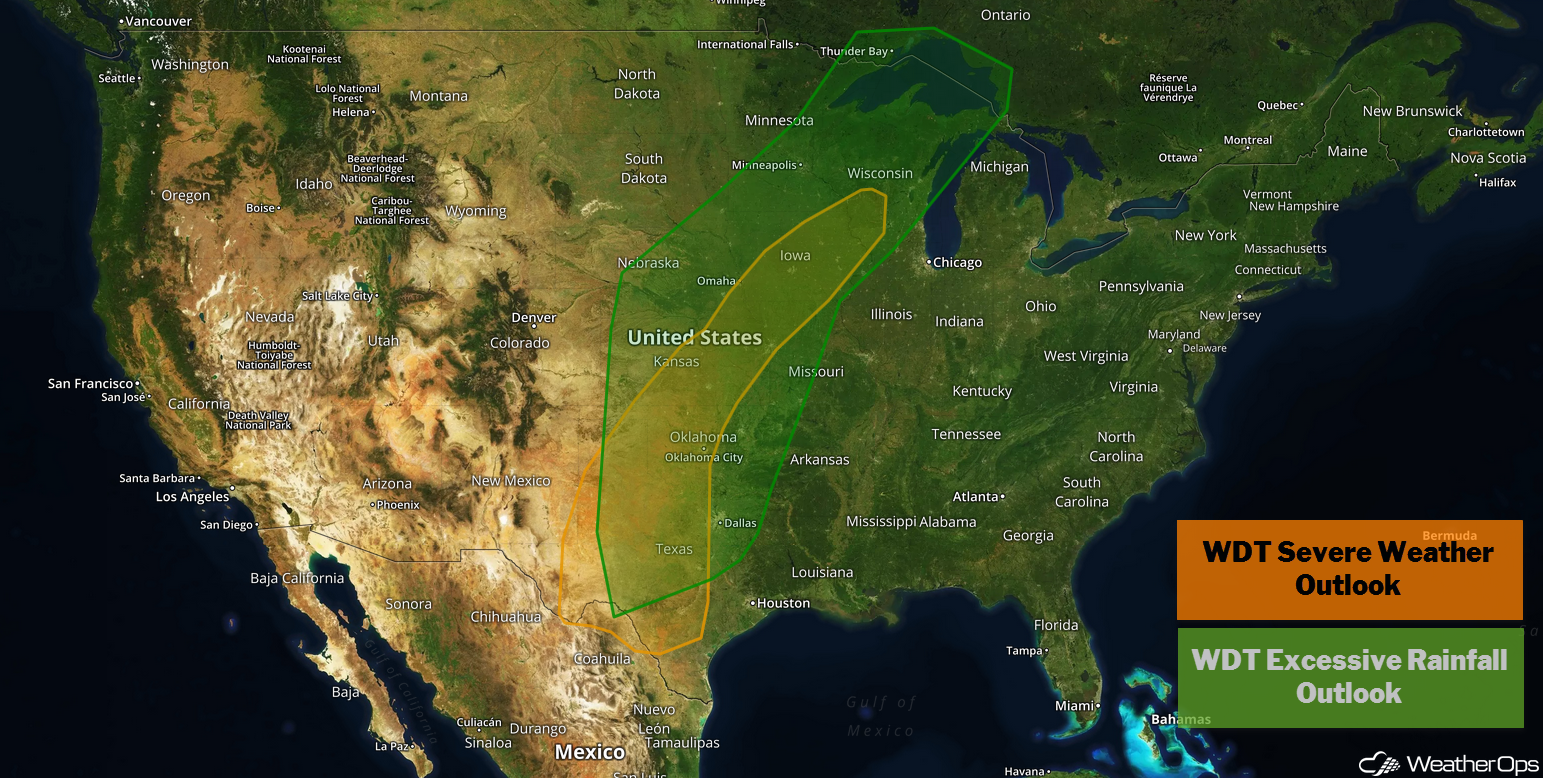 Thunderstorms for the Central US through Tuesday
The weather pattern remains virtually unchanged from yesterday. A frontal boundary will produce at least two additional days of unsettled weather across much of the southern and central US. A few strong to severe thunderstorms may develop along and south of the frontal boundary each day. With daytime heating increasing instability, a few severe thunderstorms may develop. Damaging winds will be the primary hazards, but there will be an isolated risk for large hail and tornadoes. 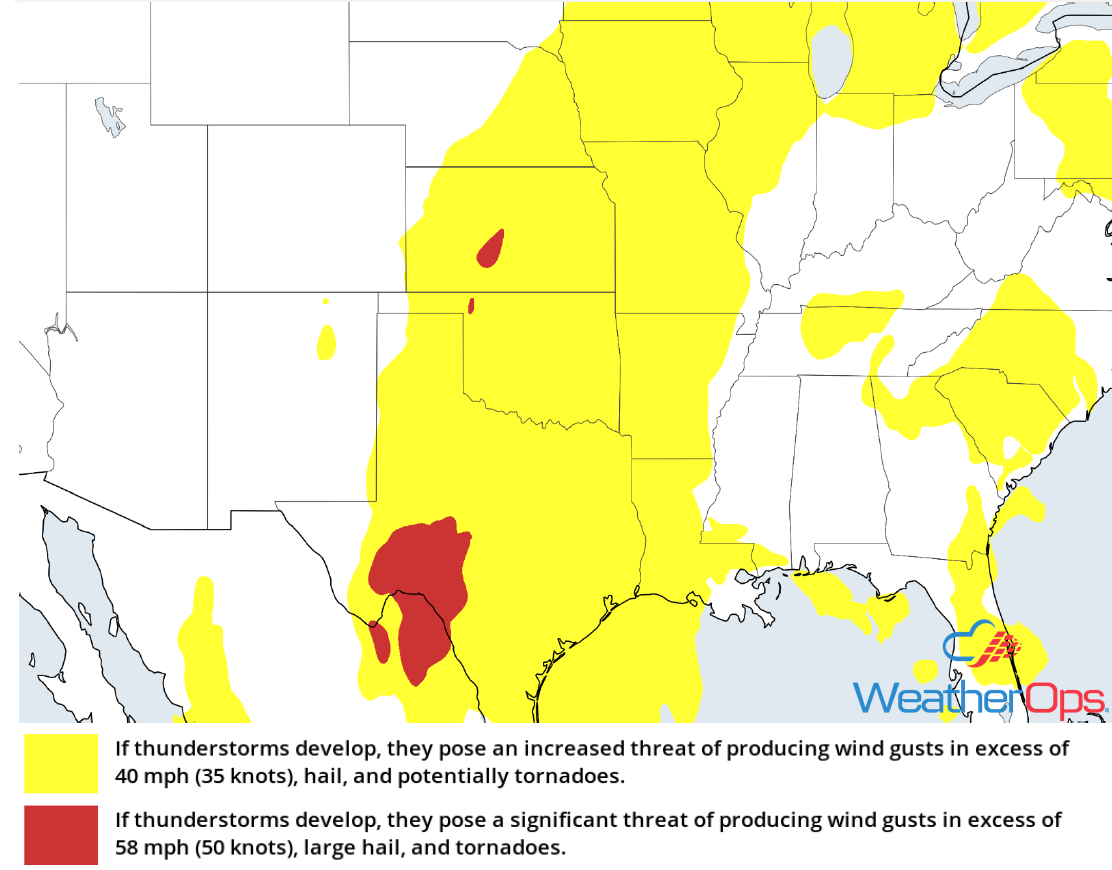 Excessive Rainfall through Tuesday across the Central Plains
The thunderstorms described above will likely be slow moving and train over the same regions over the next two days. Widespread rainfall totals of 2-5 inches with locally higher amounts in excess of 6 inches are expected, leading to the potential for flooding. 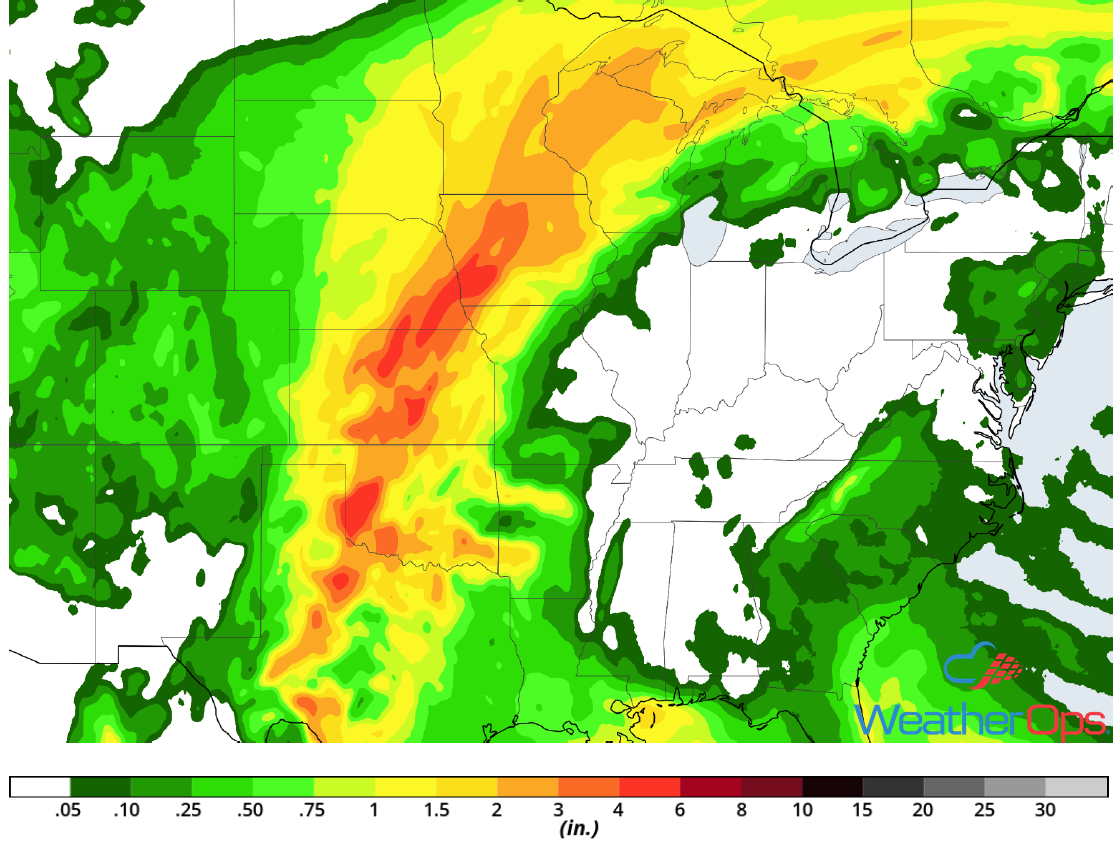 Snow from Wyoming into the Dakotas through Tuesday
Snow will continue across eastern Wyoming and shift northward across the Dakotas through the day on Monday. Accumulations of 2-4 inches are expected through Tuesday. Light icing can be expected across the western Dakotas as rain transitions to freezing rain, causing minor travel disruptions. Ice accumulations will generally be less than 0.10 inch. 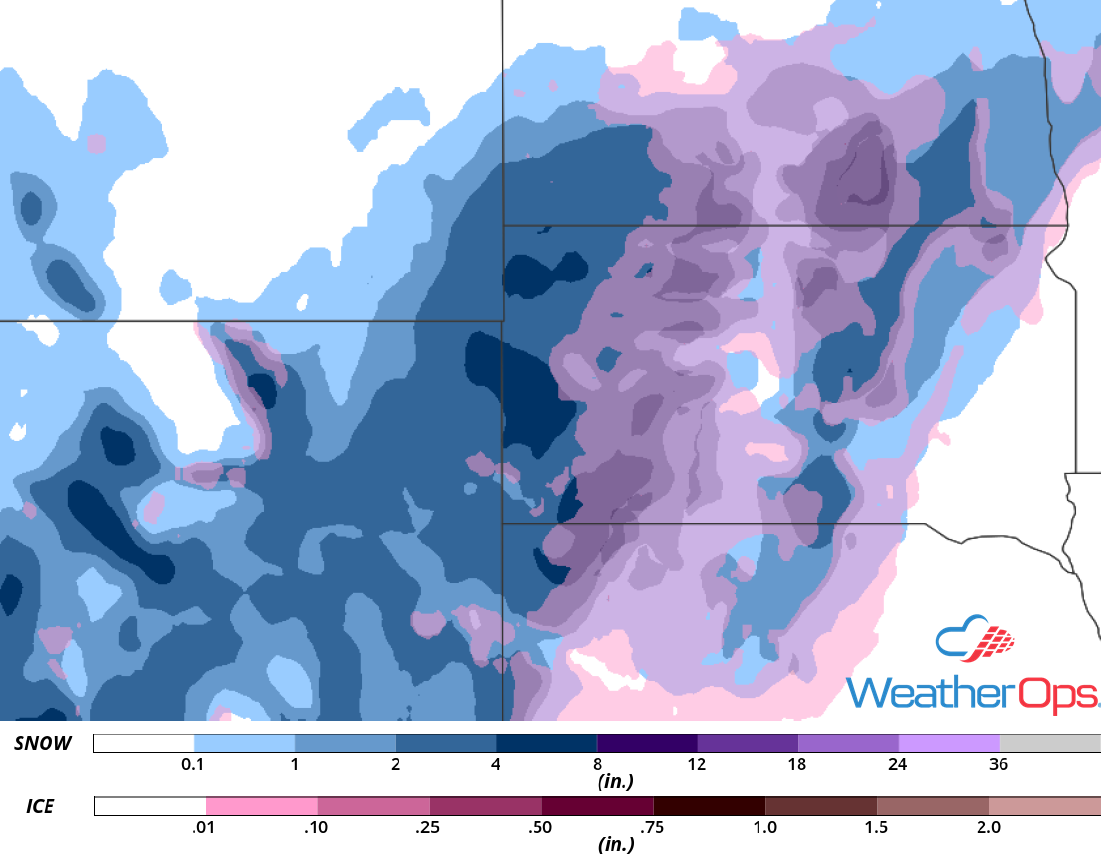 Snow and Ice Accumulation through Tuesday

Thunderstorms Wednesday from the Florida Panhandle into Central Florida
Deteriorating conditions ahead of Hurricane Michael are likely throughout Wednesday. Tropical storm to hurricane force winds will slowly begin to move into Florida over the course of the day. Squall bands as far east as central Florida may produce isolated tornadoes.

Potential for Excessive Rainfall across the Florida Panhandle Wednesday and Thursday
Excessive rainfall associated with Hurricane Michael is likely to advance further north into the Florida Panhandle on Wednesday. Excessive rainfall will likely continue into Thursday with rain amounts along Michael's path ranging 5-10 inches. Isolated rainfall amounts of 10-15 inches are likely, resulting in a high risk of localized flooding. 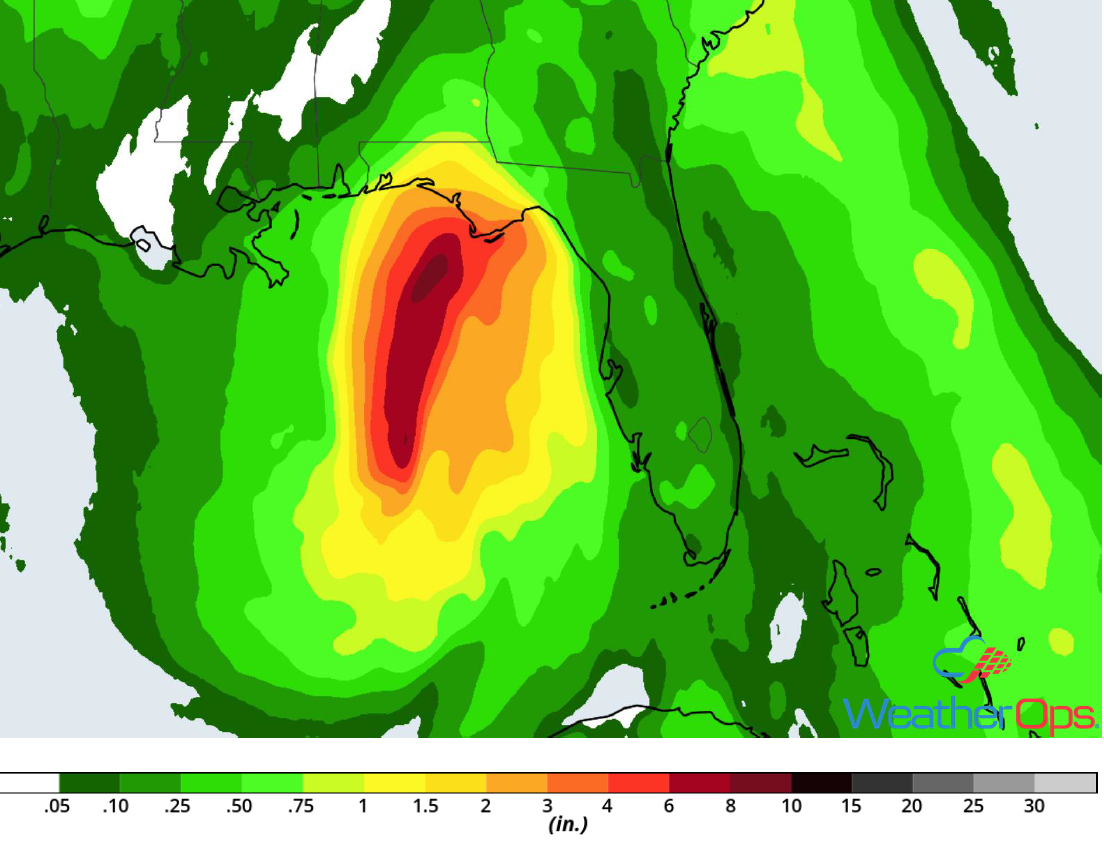 Snow Wednesday for Northern Minnesota
It is becoming increasingly likely that significant winter weather will impact Northern Minnesota on Wednesday as a very large low pressure system moves through the region. Rain is forecast to transition to snow Wednesday morning and become moderate to heavy throughout the day and evening. Snowfall amounts will range 4-8 inches with locally higher amounts in excess of 10 inches. In addition, there will be some light ice accumulation. This will likely cause hazardous travel conditions starting Wednesday morning and persisting through Thursday morning. 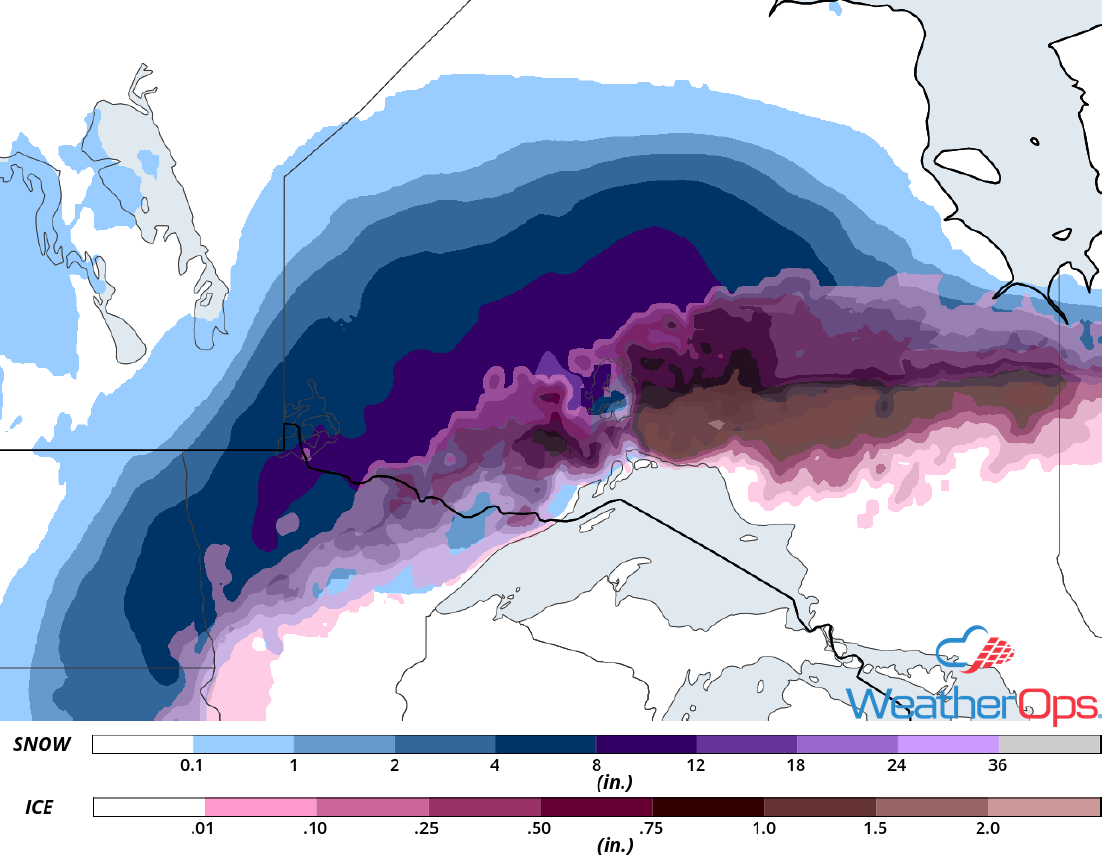 Tropical Update
Hurricane Michael (green oval) is 50 miles south of the western tip of Cuba and is moving northward at 7 mph. This motion with an increase in forward speed is expected through Tuesday night, followed by a northeastward motion on Wednesday and Thursday. On the current forecast track, Michael will move northward toward the western tip of Cuba this afternoon and into the southeastern Gulf of Mexico by tonight. Michael will move into the eastern Gulf of Mexico Tuesday and Tuesday night and is expected to move inland across the Florida Panhandle or the Florida Big Bend on Wednesday. It will then move northeastward across the southeastern US Wednesday night through Friday. Maximum sustained winds are near 75 mph with higher gusts. Rapid intensification is expected and Michael is forecast to become a major hurricane by Tuesday or Tuesday night.

Tropical Storm Leslie (red oval) is 1035 miles east-northeast of Bermuda and is moving east-southeastward at 14 mph. An east-southeast to southeast motion is expected for the next several days. Maximum sustained winds are near 50 mph. Gradual strengthening is expected and Leslie could be near hurricane strength in a few days.

An area of low pressure associated with a tropical wave is located several hundred miles south of the Cabo Verde Islands (yellow oval). Shower and thunderstorm activity has become more concentrated since last night and a tropical depression could form during the next few days while it moves west-northwestward. By late this week, upper level winds are expected to become unfavorable for development.

A broad non tropical area of low pressure southeast of the Azores (blue oval) has not become any better organized and tropical or subtropical development is not anticipated. This low is expected to move east-southeastward during the next couple of days.

A Look Ahead
Hurricane Michael is forecast to make landfall early Thursday across the Florida Panhandle and move northeastward across the Southeast through Friday. Rainfall totals of 5-10 inches with locally higher amounts in excess of a foot are expected. Elsewhere, showers and thunderstorms will extend from the Great Lakes to the Southeast Thursday ahead of a cold front. By Saturday, an area of low pressure will develop over the Southern High Plains and bring a potential for heavy rain to the Central and Southern Plains. Heavy rain is forecast across South Texas on Sunday.