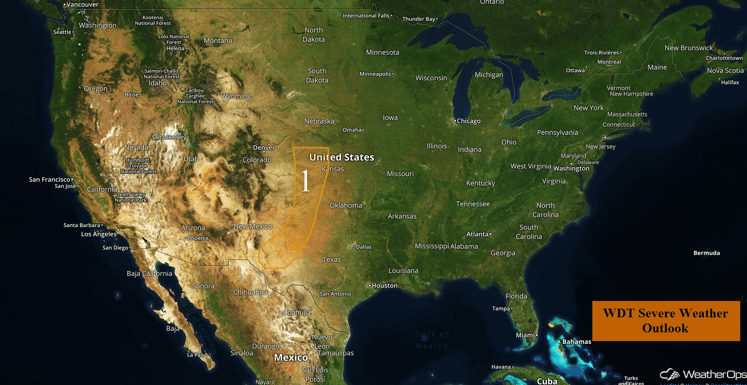 A narrow region of instability is forecast across portions of the Central and Southern Plains to the east of a lee trough and dryline. With marginal moisture and daytime heating, there will be the potential for strong to severe thunderstorms across Region 1 into the afternoon and early evening  The primary threats with any storms that develop will be strong gusty winds and large hail. 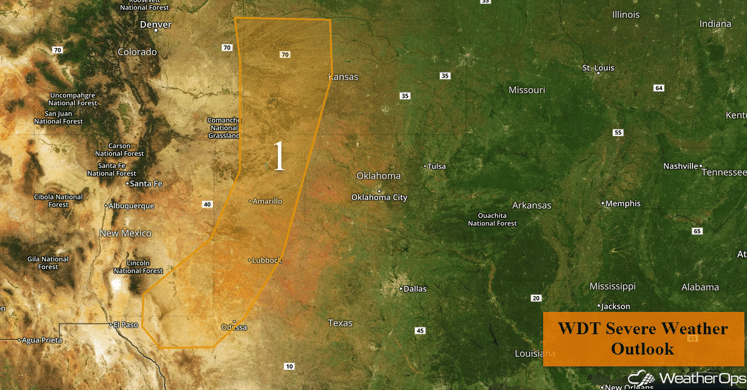 Severe Thunderstorms Expected across the Great Plains on Tuesday

A strong upper level trough, along with a series of disturbances, is forecast to move across the Central US. At the surface, an eastward advancing cold front will provide a focus for the development of thunderstorms across the region. Due to increasing moisture and instability ahead of the front, conditions are expected to become favorable for severe thunderstorms, with supercells possible. All severe hazard will be possible, including large hail, damaging winds, and tornadoes. The greatest severe threat is expected to be across portions of Kansas and Oklahoma. 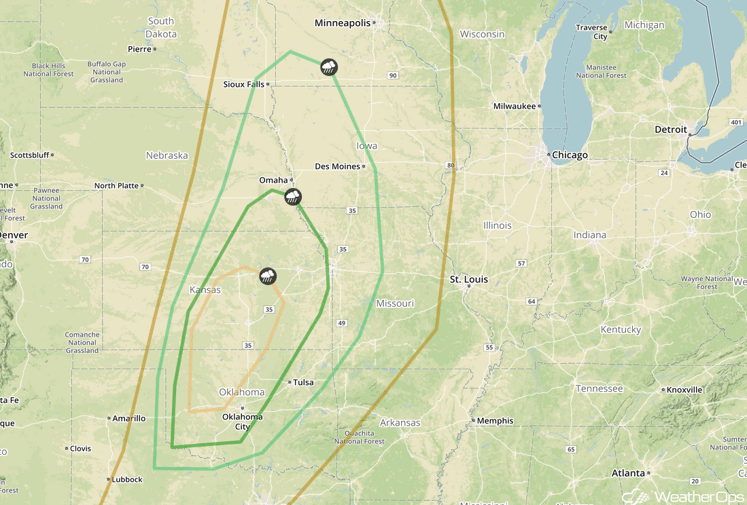 A cold front advancing eastward across the Great Plains and into the Midwest will produce showers and thunderstorms throughout the day Tuesday, with the heaviest activity expected during the evening and overnight hours. Due to increasing moisture ahead of the front, there will be a potential for excessive rainfall across the region. General rainfall amounts of 1-2 inches will be possible, with locally higher amounts in excess of 3 inches. 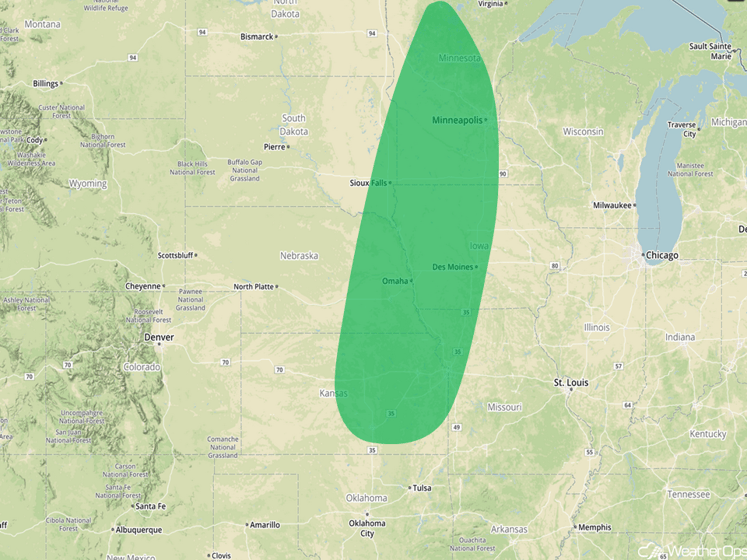 Precipitation on the backside of a departing surface low is expected to transition to all snow by early Tuesday across  the higher elevations of western Montana mainly above 4500 feet. Snowfall accumulations of 8-16 inches with locally higher amounts in excess of 20 inches, and may lead to hazardous weather conditions across the region. Precipitation should remain mostly rain at lower elevations. 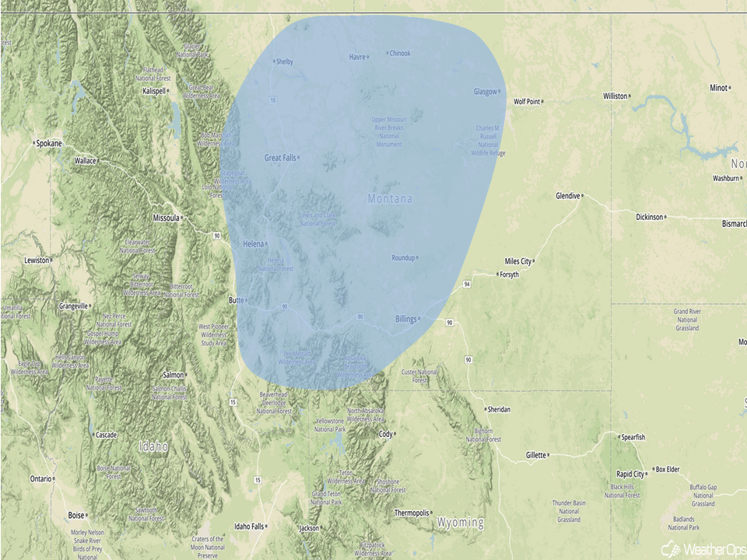 Strong to Severe Thunderstorms Possible Wednesday for Central US

A strong upper level trough will continue progressing eastward on Wednesday, with an associated cold front providing a focus for the development across portions of the Central Plains eastward into the mid-Mississippi Valley. Thunderstorms may be ongoing early in the morning with additional development possible later in the day. Storms that develop in the afternoon and evening may be initially isolated in nature, but could evolve into a more organized complex during the overnight hours. There is a marginal risk of severe thunderstorms on Wednesday with gusty winds and hail the primary hazards. 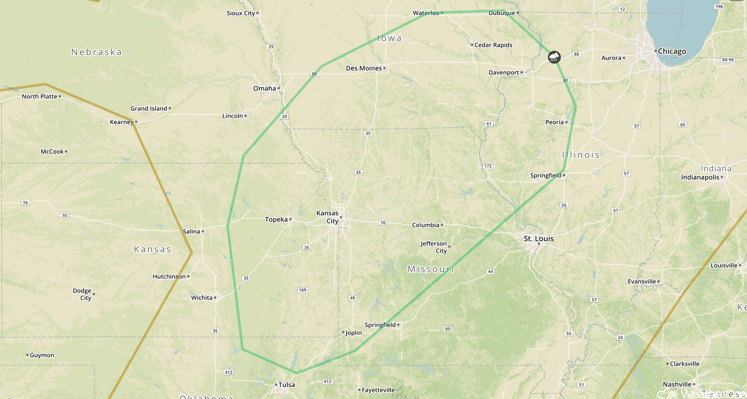 Hurricane Matthew (red oval) is moving toward the north at 6 mph and this general motion is expected to continue through Wednesday with an increase in forward speed tonight. On the forecast track, the center of Matthew will approach southwestern Haiti tonight and move near or over portions of the southeastern and central Bahamas Tuesday night and Wednesday. Matthew is a category 4 hurricane and some fluctuations are possible over the next few days, but Matthew is expected to remain a major hurricane through Wednesday.

A broad area of low pressure (green oval) located about 400 miles northeast of the northern Leeward Islands continues to produce disorganized showers and thunderstorms. Some development of this low is possible during the next couple of days before upper level winds become unfavorable for development. This system is expected to move west-northwestward to northwestward at 10-15 mph during the next few days. 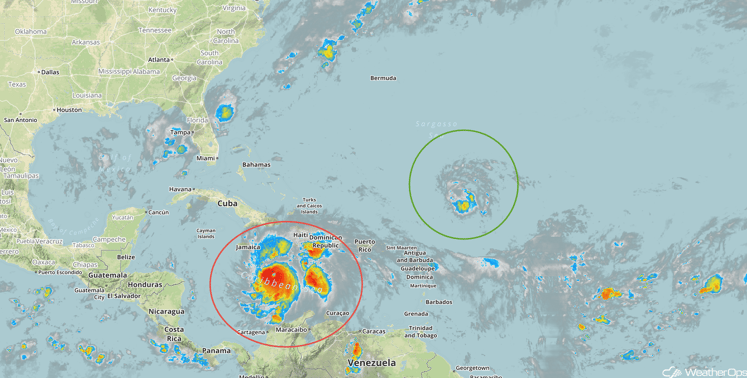 Hurricane Matthew will need to be monitored along the East Coast by the end of the week with the potential for tropical storm conditions along the coast. Elsewhere, thunderstorms will be possible for portions of the Plains on Thursday as an area of low pressure and cold front moves across the region.