An area of low pressure moving along the East Coast will bring a potential for snow to portions of the Northeast Tuesday and Wednesday.

Snow for the Northeast Tuesday and Wednesday
An upper level trough moving across the eastern US will aid in the development of a surface low that is expected to move along the East Coast. This will bring a potential for snow to portions of the Northeast Tuesday and Wednesday. Snow amounts will be largely dependent on the path of the low. However, snow accumulations of 3-6 inches with locally higher amounts in excess of 8 inches will be possible from northwestern Massachusetts to southern Maine. 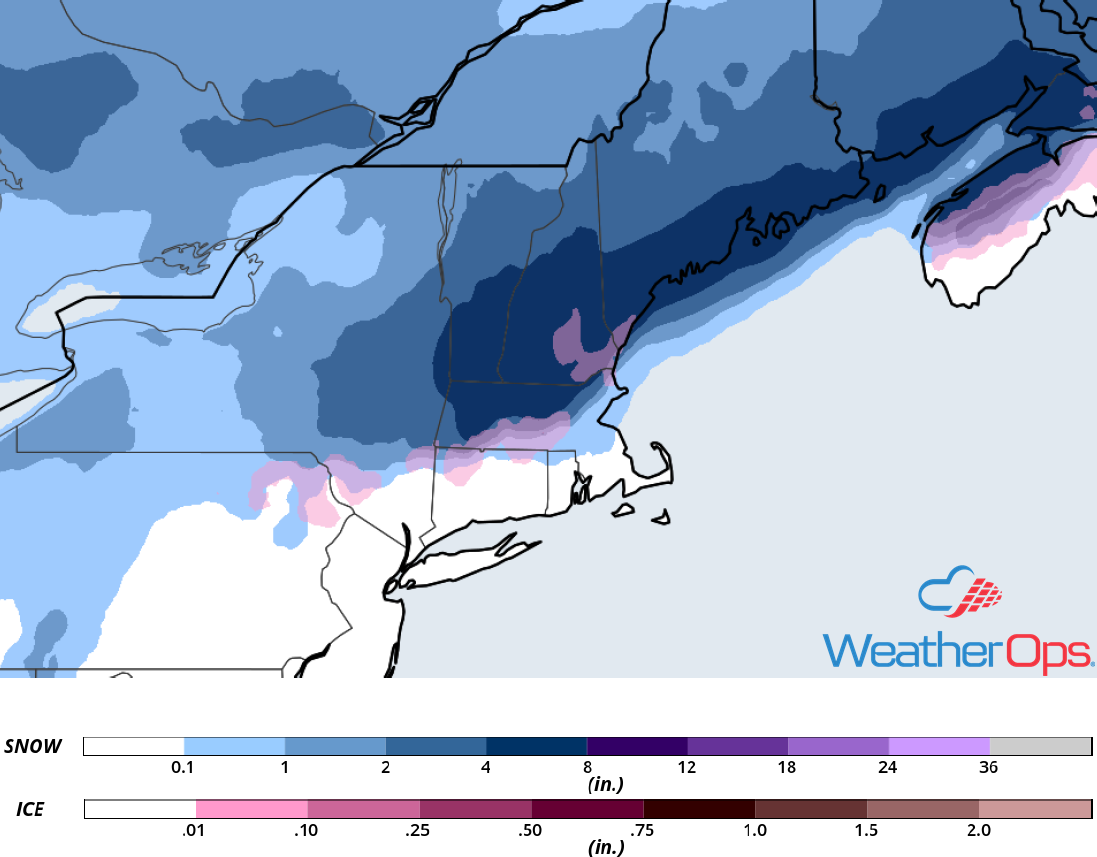 Snowfall Accumulation for Tuesday and Wednesday

Potential for Snow Wednesday across the Sierra Nevadas
A deep upper level trough approaching from the Pacific will produce strong lift over the Sierra Nevadas. At the same time, a Pacific cold front will move ashore bringing plentiful moisture to the region. This will allow for widespread snowfall in the higher elevations and freezing rain in the lower elevations; freezing rain will, however, quickly transition to snow. Snowfall totals of 10-14 inches are expected in the higher elevations, with locally higher amounts in excess of 18 inches. Wind gusts in excess of 30 mph could cause blowing snow across the region, reducing visibility and creating hazardous road conditions. Snowfall is expected to begin Wednesday evening and continue into Thursday. 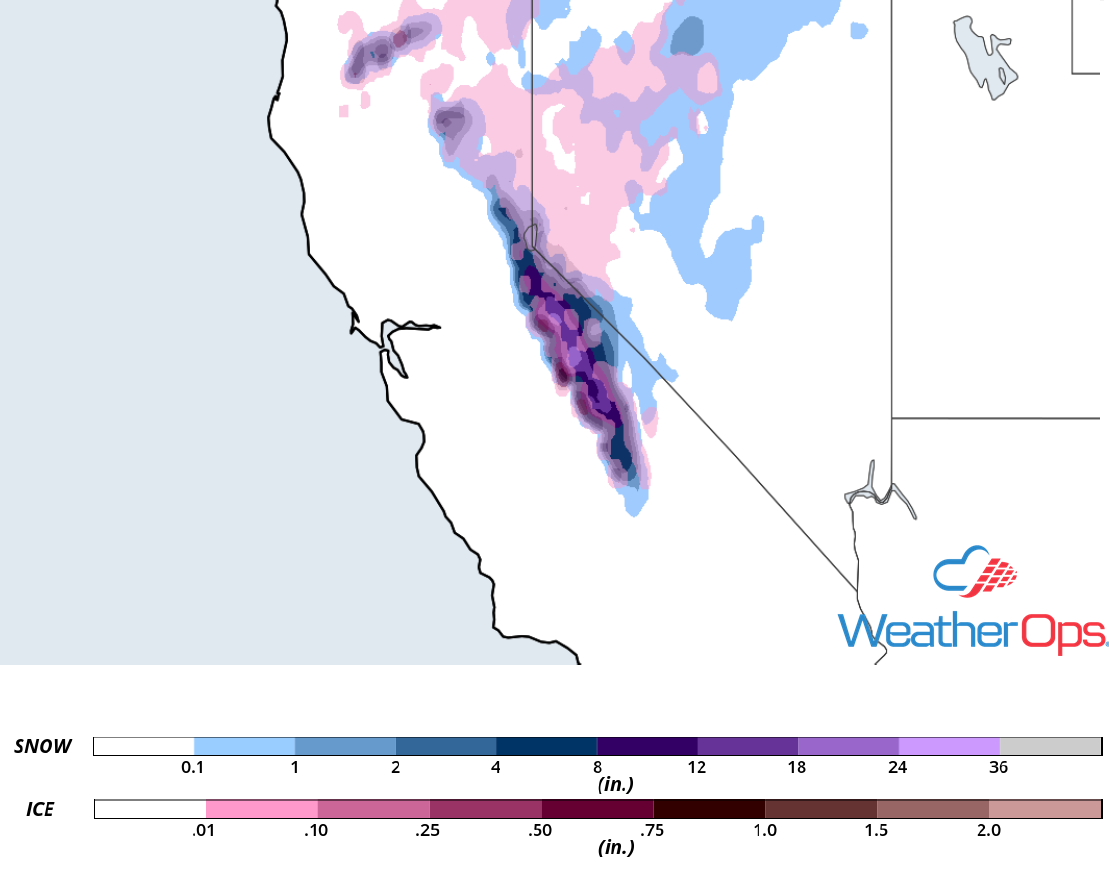 Excessive Rainfall for Southern California Wednesday
Onshore flow and an approaching upper level trough will produce showers across portions of southern California on Wednesday. Rainfall amounts of 1-2 inches with locally higher amounts in excess of 3 inches are expected. While rainfall amounts may not seem heavy, extended rainfall on burn scars may produce flash flooding or mudslides. Rainfall is likely to continue into Thursday. 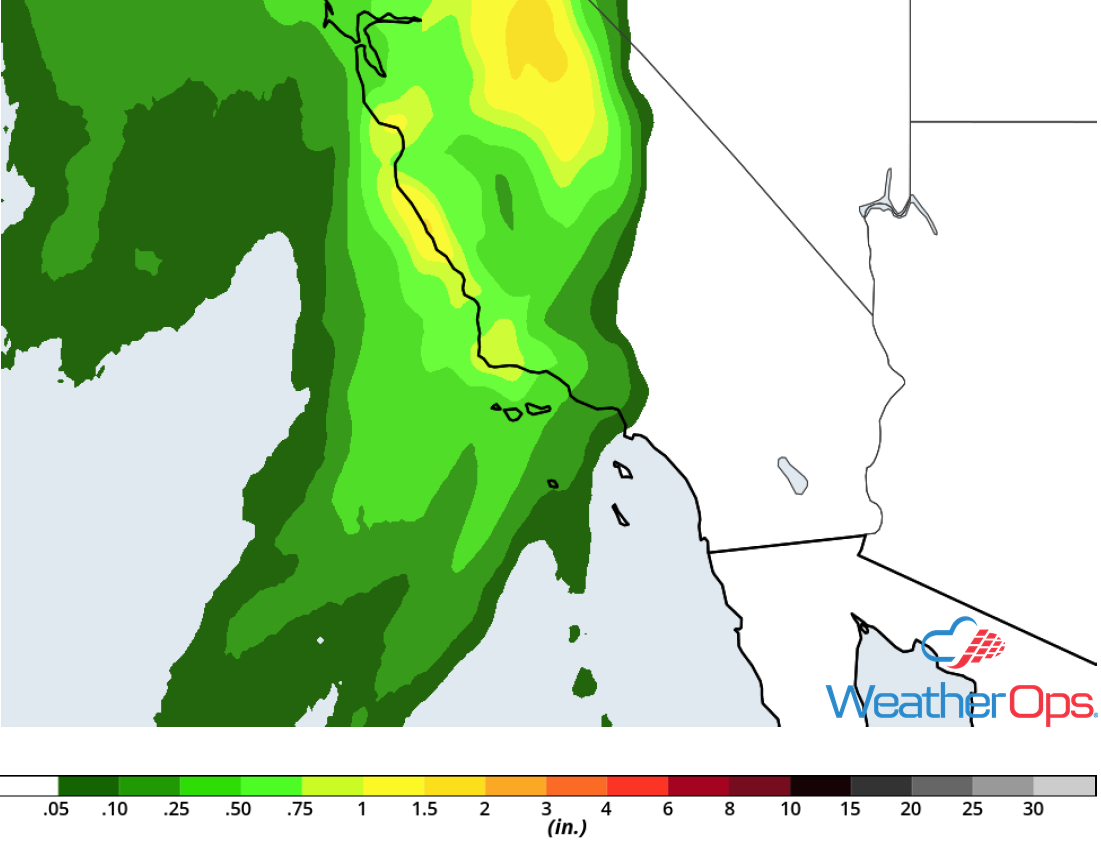 A Look Ahead
Moderate to heavy snow will extend from the Sierra Nevadas into the Central Rockies on Thanksgiving as an area of low pressure continues to move eastward. Snow is forecast across portions of the Northern Rockies on Friday. By Saturday, an area of low pressure may develop in the lee of the Rockies, bringing the potential for snow to Colorado and Wyoming. This activity will spread into the Plains late Saturday. On Sunday, snow will move into the Great Lakes.