Region 1
An intensifying area of low pressure in the Dakotas will push northeastward into southern Manitoba and Ontario over the next day. A trailing cold front will extend southwestward from the low into Missouri, Kansas, and Oklahoma. Daytime heating will allow for enough destabilization for the development of severe thunderstorms ahead of the cold front during the afternoon. Isolated severe thunderstorms will be most likely from central Minnesota southwestward into eastern Kansas from the mid afternoon through the early evening. Large hail and damaging winds will be the primary hazards, but a few tornadoes will be possible if any isolated storms form ahead of the front. High resolution models are indicating the potential for strong supercells across southeastern Kansas this evening between 6pm and 10pm. Late this evening through early tomorrow morning, a squall line with damaging winds and perhaps an isolated tornado is forecast to progress southeastward from southern Minnesota into eastern Oklahoma. The line will more than likely weaken with a few instances of damaging wind before it moves into the mid-Mississippi and Ohio Valleys near daybreak tomorrow.

Update 2pm CST: Tornado Watch in effect for much of Iowa until 10pm CST.

Region 2
Snow will continue for coastal regions of the Pacific Northwest through noon on Monday. Accumulations of up to 2 inches are forecast mainly in the mountains.

Significant Snowfall Possible for Northern Rockies on Wednesday
As a new area of low pressure moves into the Northern Rockies, moderate to heavy snowfall is forecast for the higher elevations. Snowfall totals of 6-10 inches with locally higher amounts in excess of 12 inches are expected. 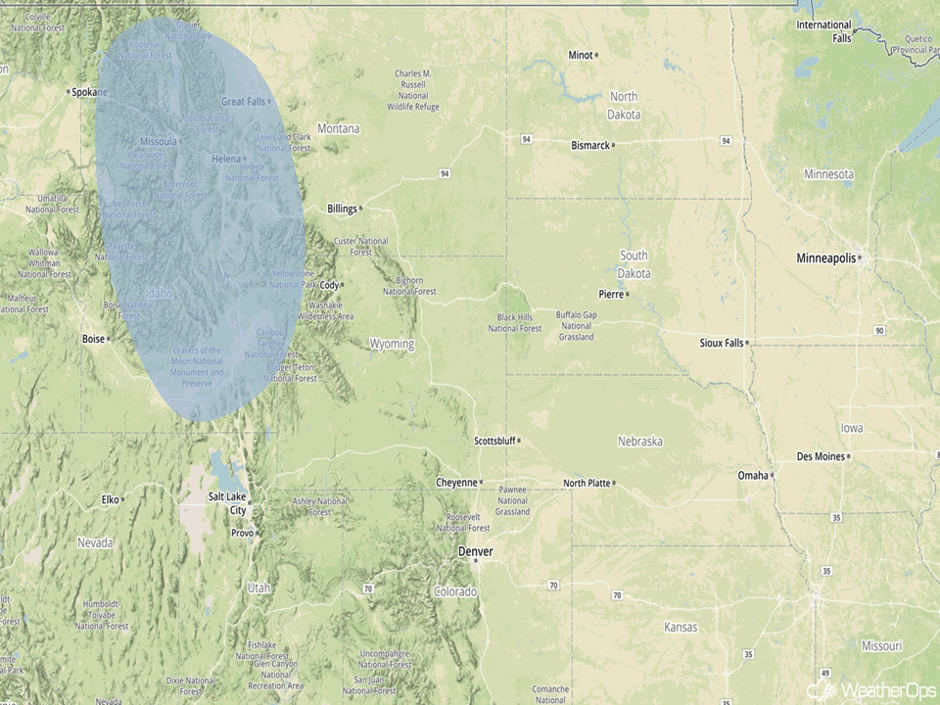 A Look Ahead
Moderate to heavy snowfall will continue for portions of the Northern Rockies on Thursday as a warm front lifts northward. Lower elevations are expected to see mostly rain as temperatures warm behind the front. Higher elevations will see additional snowfall accumulations of 6-10 inches.

This is just a brief look at current weather hazards. We can provide you site-specific weather forecast information for the purpose of protecting your personnel and assets and to assess your weather risk. Try a 7-day demo right away and learn how timely precision weather information can enhance your bottom line..