Excessive Rainfall across Texas through Friday
A trough of low pressure is forecast to stall across the southern Texas region over the next several days, allowing for a long sustained period of rainfall through at least Wednesday, with activity then lessening but still possible through the end of the week and into the weekend. Current rainfall estimates through Friday show a widespread swath of 3-5 inches, but localized totals in excess of 10 inches, particularly near Corpus Christi, are forecast. Significant flooding concerns are likely, and flash flooding is expected. 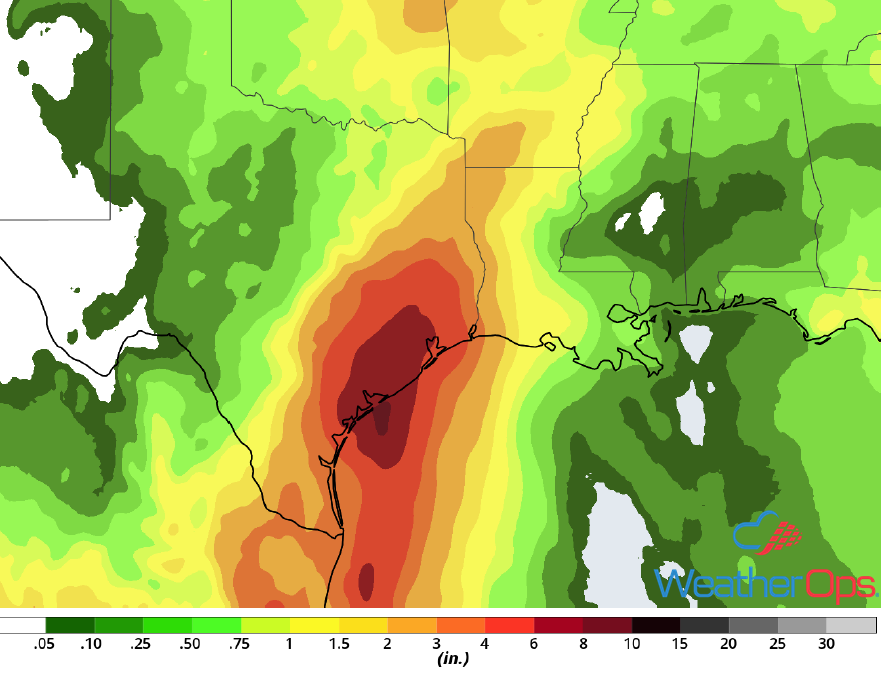 Elevated Winds and Seas through Friday across the Western Gulf of Mexico
An extended period of elevated winds and seas will continue through early Friday. Winds will increase as a result of an area of low pressure over the western Gulf of Mexico. Winds will range 25-35 knots with gusts in excess of 45 knots. Seas near the shore will range 7-10 feet and 9-12 feet in the deeper waters. Scattered to numerous thunderstorms will continue across portions of the western Gulf of Mexico through Monday evening. Wind gusts in excess of 50 knots, waterspouts, heavy rain, and frequent lightning will all be potential hazards with these storms.

Thunderstorms for the Northeast on Monday
An area of low pressure and a cold front moving across Canada and into New England will present a risk of severe weather today. Plentiful moisture will be present, allowing for widespread thunderstorms across the frontal boundary. Storms will develop across Canada and the Great Lakes regions and spread eastward into New England, with damaging winds the expected hazard.

Risk for Excessive Rainfall Monday across the Northeast
Along with the threat for severe weather today, there will be an accompanying threat for moderate to heavy rainfall across the region. Rainfall totals of 1-1.50 inches are expected, with localized totals in the strongest thunderstorms exceeding 2 inches. 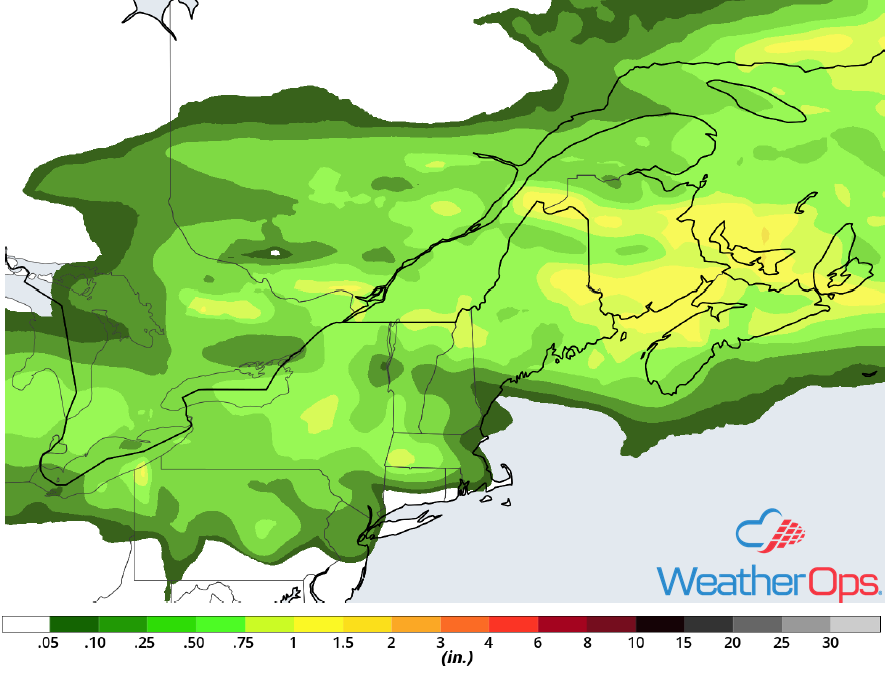 Potential for Thunderstorms across the Great Lakes and Central Plains Monday
Scattered strong to severe thunderstorms may develop today ahead of a stalled frontal boundary and weak area of low pressure across the region. Ongoing showers and storms will start to weaken this morning, with redevelopment later this afternoon. Strong winds and large hail will be the primary threats. 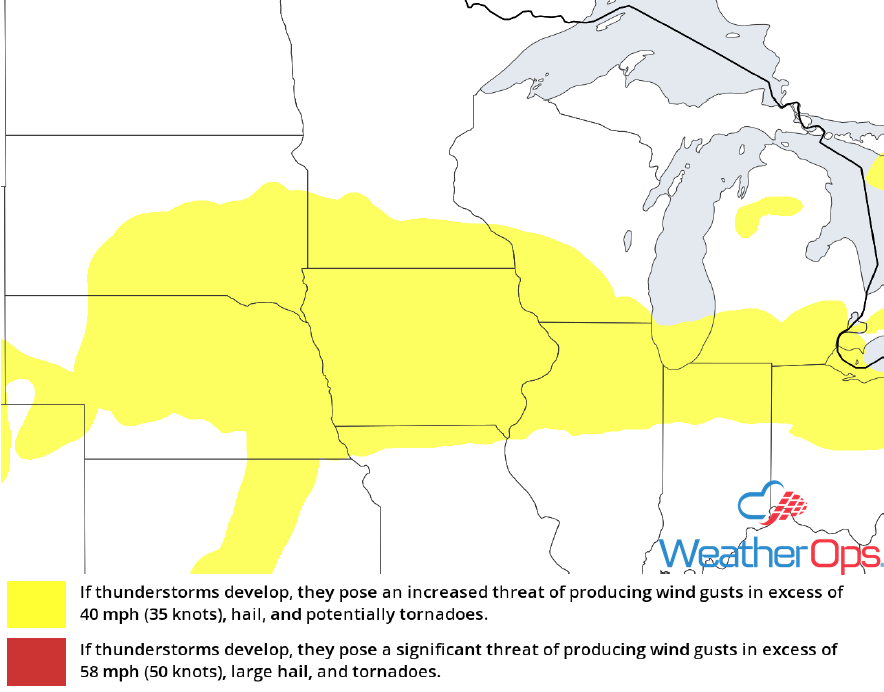 Excessive Rainfall Monday from the Central Plains into the Great Lakes
Showers and thunderstorms are already ongoing across this outlook region this morning, with a risk for thunderstorms later today, promoting further heavy precipitation. Rainfall totals of 1-2 inches with localized totals exceeding 2.5 inches are forecast. 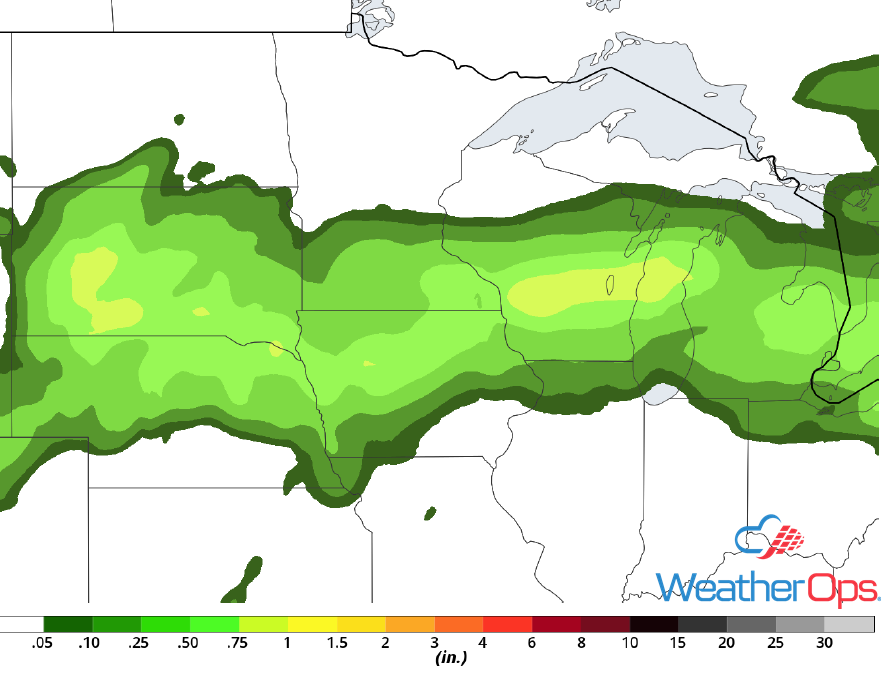 Thunderstorms across Colorado and Wyoming on Monday
Upslope flow across the high terrain of the region will occur today, promoting isolated instances of severe weather during the afternoon through early evening. Large hail, damaging winds, and tornadoes will all be potential hazards, but these storms should be limited to around the border of Wyoming and Colorado. 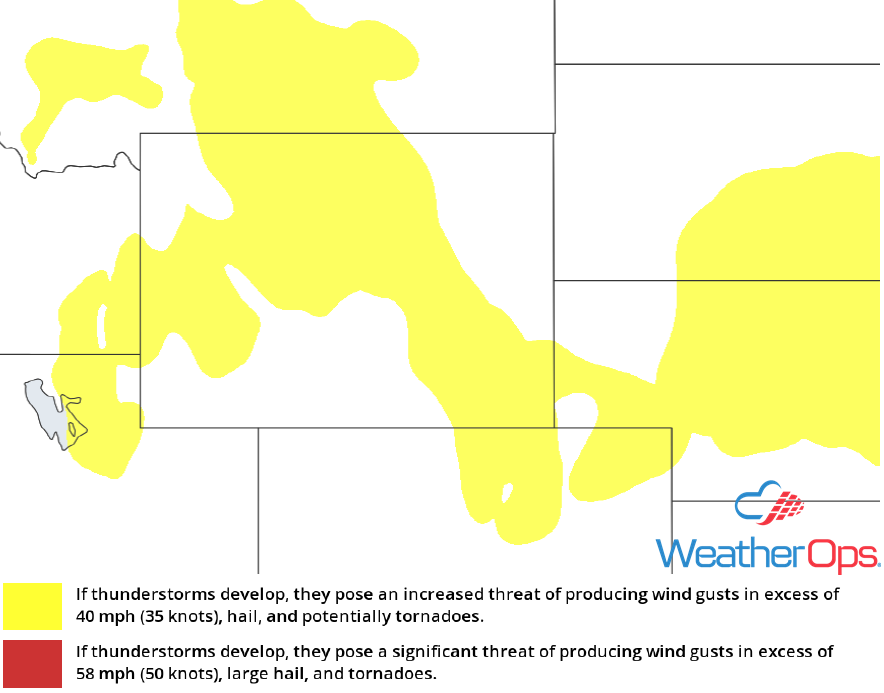 Potential for Excessive Rainfall Monday across Idaho and Montana
As an area of low pressure continues to meander across the Intermountain West today, the already moist region will continue to receive showers and thunderstorms with a threat for flooding expected. Current rainfall amounts of 1-2 inches are forecast, with localized totals in excess of 2.5 inches forecast. 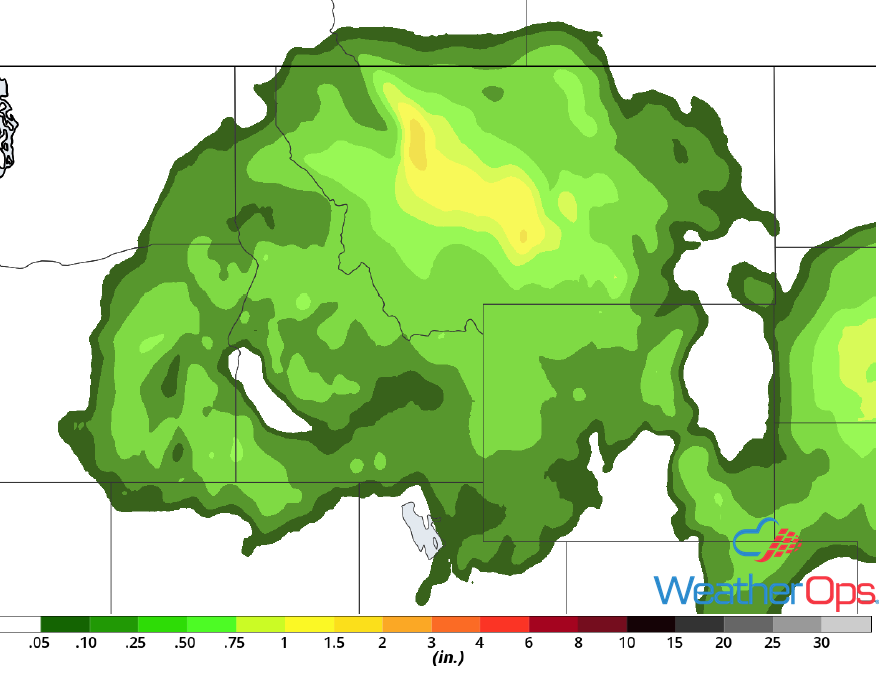 Thunderstorm Potential from the Front Range through the Central Plains on Tuesday
A lingering area of low pressure, a stalled frontal boundary, and plentiful moisture will continue to promote strong to severe thunderstorms tomorrow, this time for the Front Range through Central Plains. Initial development from upslope flow as well as along the stalled boundary is expected, with favorable wind shear promoting supercell storms capable of a risk of large hail, damaging winds, and tornadoes. Storms should merge with each other and continue into the evening and nighttime hours moving eastward. 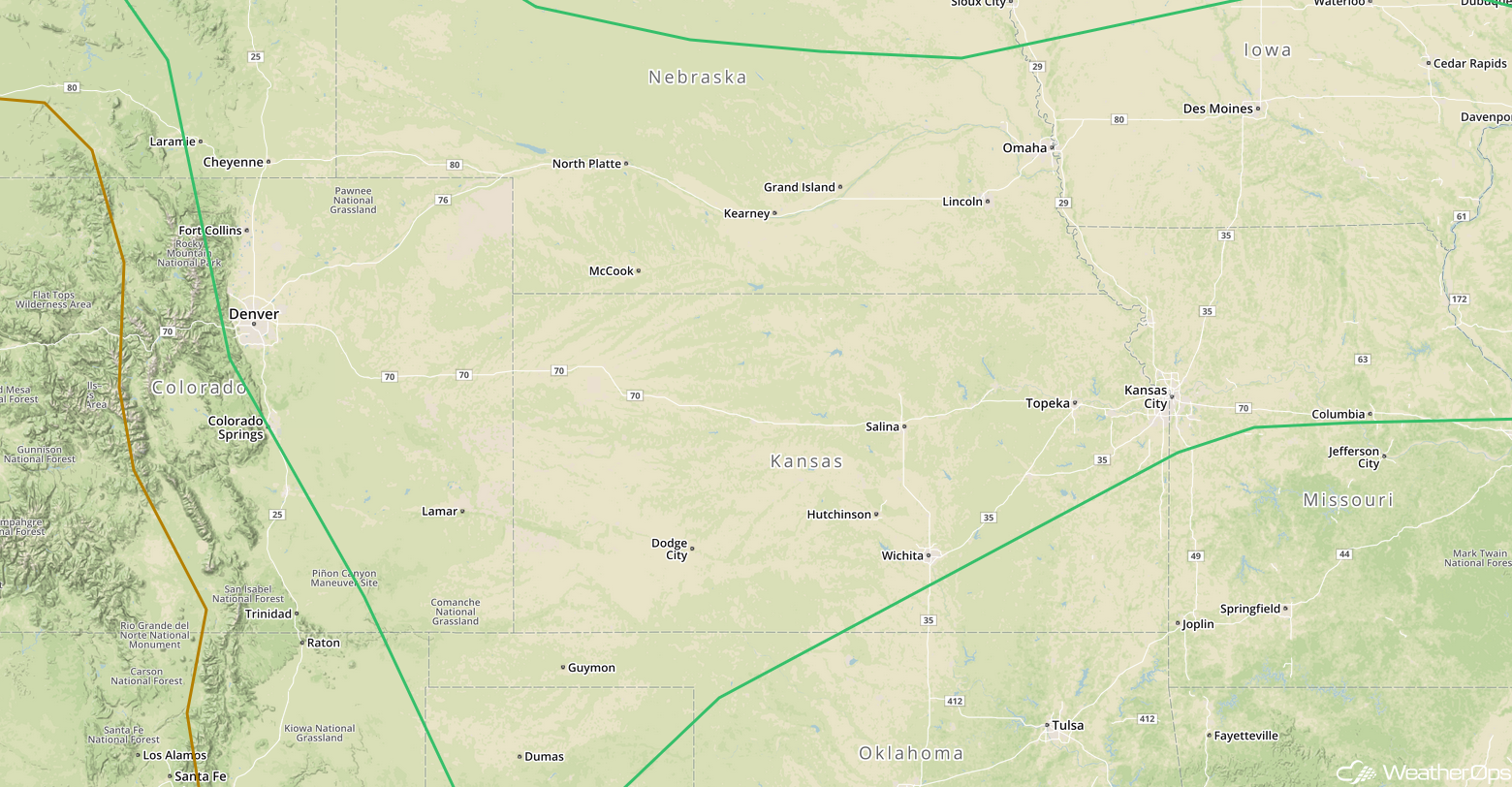 Excessive Rainfall from the High Plains into the Mid Atlantic Tuesday and Wednesday
With plentiful moisture expected along a stalled frontal boundary stretching from Colorado through the Mid-Atlantic, areas of widespread showers and thunderstorms will occur, including a severe weather risk tomorrow and Wednesday. A risk for flooding along the entire boundary is forecast Tuesday and Wednesday. Widespread rainfall totals of 1-2 inches, and localized amounts in excess of 3-4 inches, are forecast across the Central Plains and Midwest. 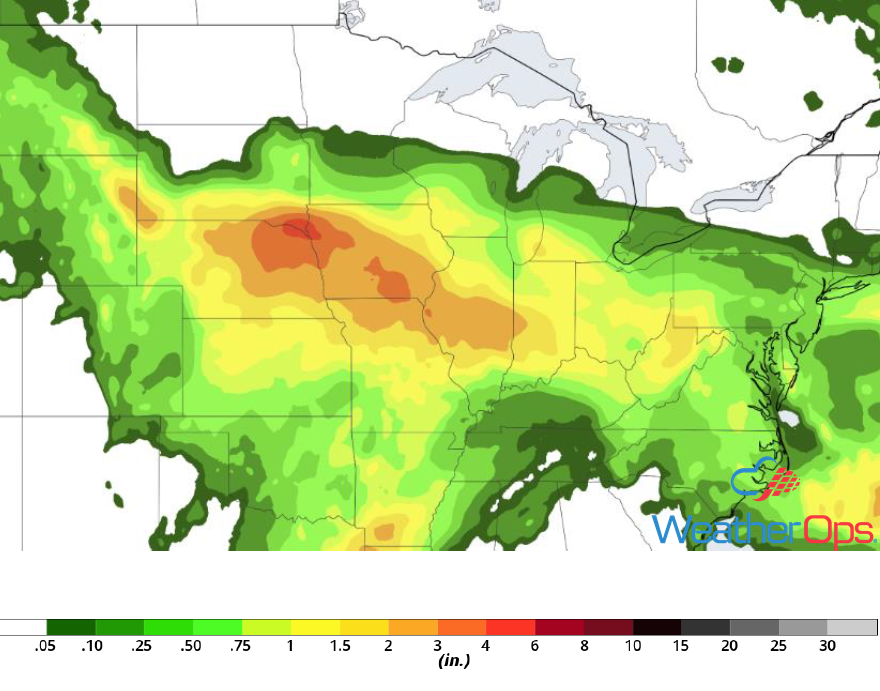 Rainfall Accumulation for Tuesday and Wednesday

Thunderstorms for the Central and Southern Plains on Wednesday
Although ongoing cloud cover and possibly a line of thunderstorms could inhibit some development on Wednesday for this region, outflow and a cold front should allow for new development during the afternoon from Oklahoma northward into Iowa. Damaging winds and large hail will be the primary risks with this activity. 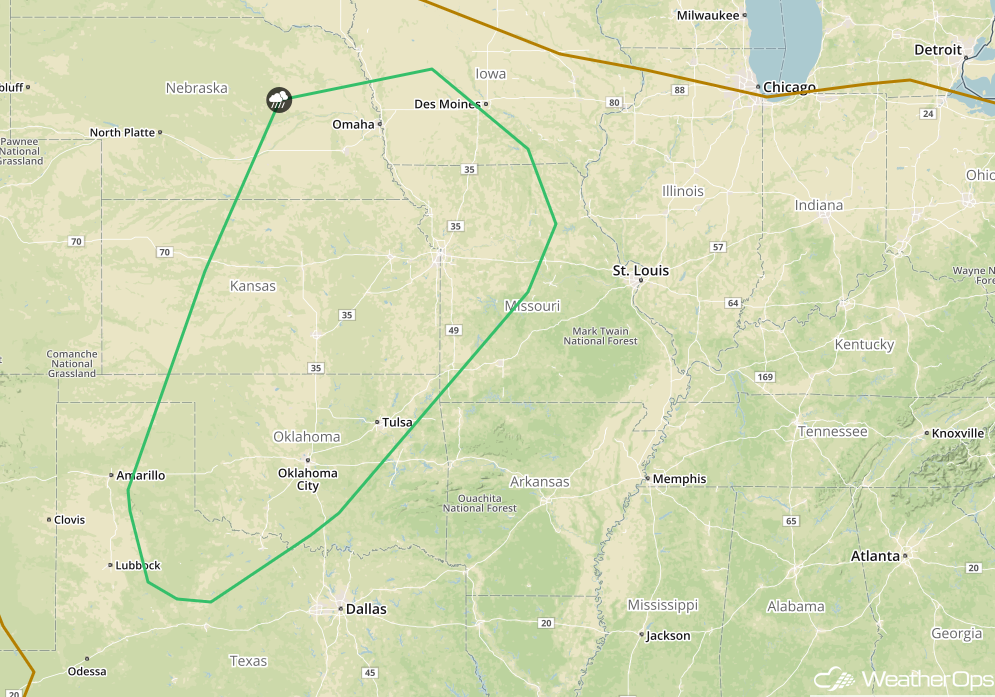 Potential for Thunderstorms Wednesday across the Mid Atlantic
Although not as strong as previous days, thunderstorms may develop along a stalled frontal boundary from Virginia to the coastline on Wednesday. Storms will be capable of damaging winds as they move eastward. 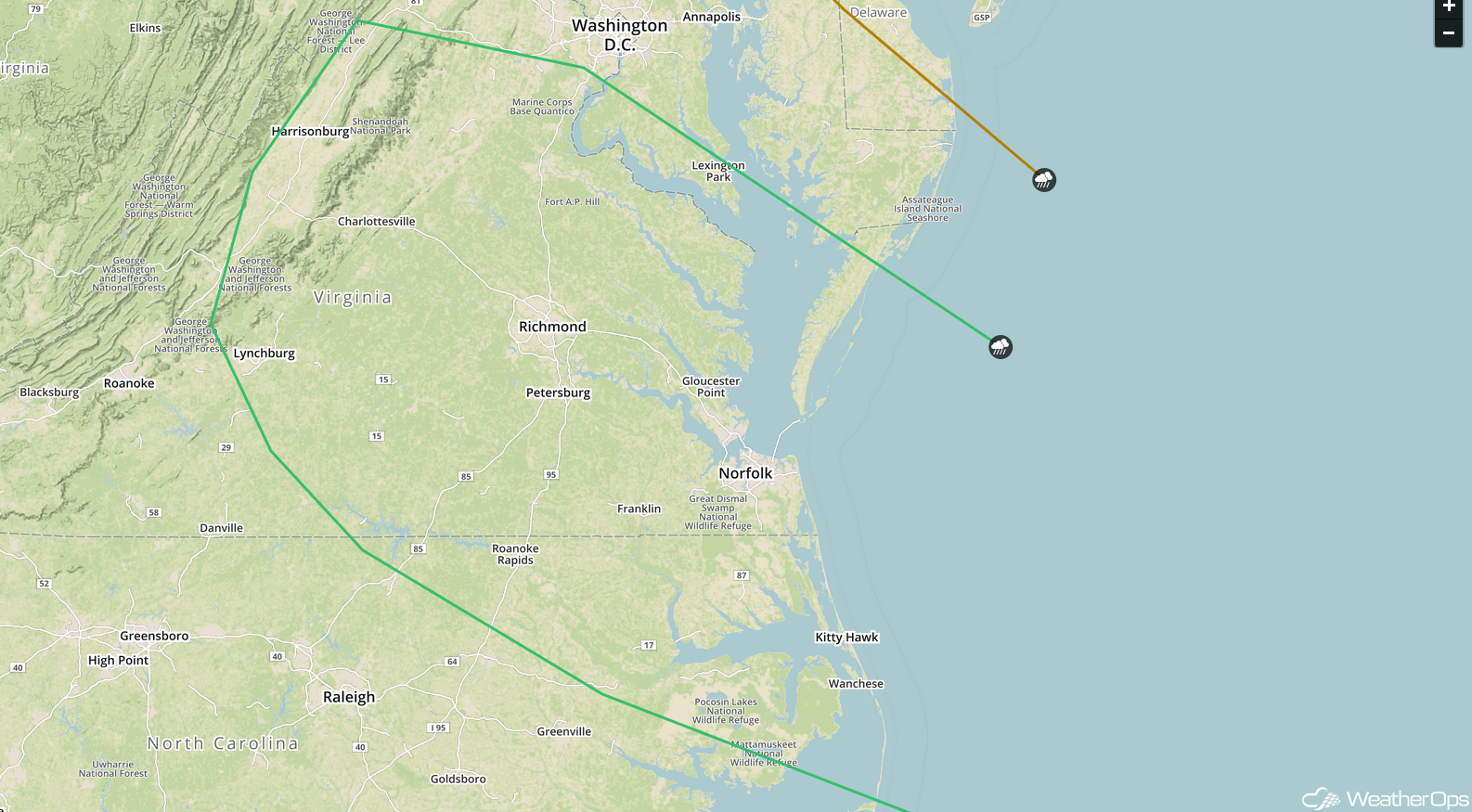 Tropical Update
Disorganized showers and thunderstorms over the northwestern Gulf of Mexico are associated with an upper level low interacting with a surface low. Development of this system is not anticipated before it moves inland over Texas later today and tonight. Heavy rainfall and flash flooding is anticipated across southern and southeastern Texas are likely to continue over the next few days.