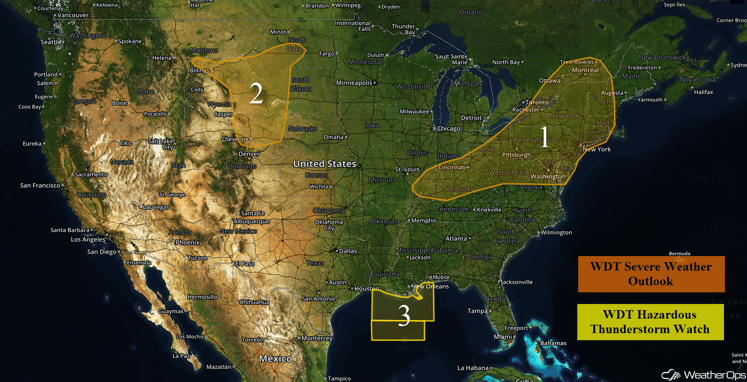 With an area of showers and thunderstorms moving out of the Great Lakes and into the Northeast today, thunderstorms capable of damaging winds will be possible through the remainder of the morning. During the afternoon, activity should re-intensify and overspread the region, with new storms developing along the outflow from early morning activity, as well as along the cold front stretching into Illinois. Damaging winds will be the main risk, with a low threat of an isolated tornado or two primarily in upper New York towards the Canada border.

With an area of low pressure beginning to develop in Region 2, upslope flow into the higher terrain is expected. Moisture return will be a bit weaker, but daytime heating and instability should be enough that isolated to scattered thunderstorms are expected to form during the afternoon, with winds and hail the primary risks.

Thunderstorm activity across the Central Gulf of Mexico is forecast to continue to increase in coverage throughout the day. While most of this activity will likely remain below severe limits, a few of the stronger storms may produce winds in excess of 40 knots (45 mph), locally rough seas, and frequent lightning. While larger scale winds will remain out of the south to southwest, wind gusts will have the potential to briefly turn out of the west to northwest.

Strong to Severe Thunderstorms Possible for Tuesday across Northern Plains

There will be a chance for scattered to widespread thunderstorms across much of the Northern Plains on Tuesday, some of which may become strong or severe. An area of low pressure will develop on the lee side of the Northern Rockies during the day, with thunderstorms expected to develop during the late afternoon hours along an associated warm and cold front. This activity will likely persist into the evening hours, with the primary threats being large hail and damaging winds within severe storms. 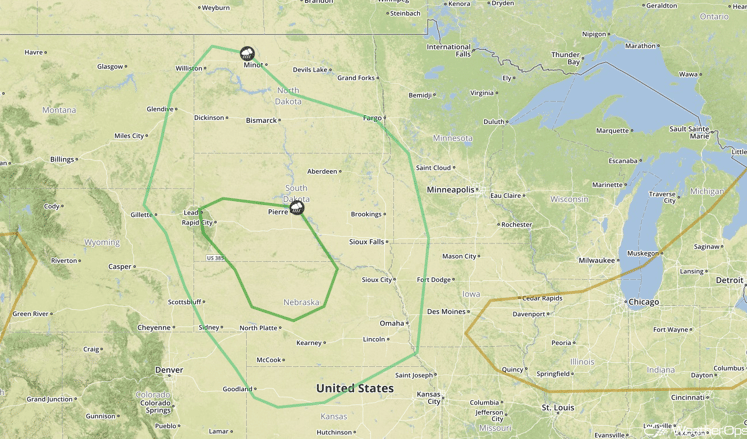 There will be a chance for scattered showers and thunderstorms across the Tennessee Valley during the afternoon hours on Tuesday. A cold front will move southward and be the focus for the development of thunderstorms. Activity should be mostly scattered with an isolated chance of damaging winds, with the threat diminishing after sunset.

Strong to severe thunderstorms will be possible across portions of the Midwest and Central Plains on Wednesday as a weak area of low pressure shifts eastward. Ongoing showers and thunderstorms from the previous days' convection will likely complicate things, however, model guidance is in general agreement that additional development will be possible within the region during the afternoon and evening hours. This activity will likely pose a risk for large hail and damaging winds through the evening hours..